Air Fryer Cinnamon Donuts are the perfect treat to serve up for breakfast or dessert. You won’t believe how easy it is to make this air fryer recipe! Made with canned biscuits and a coating of cinnamon and sugar. You’ll end up with a great treat that your family and friends will love. 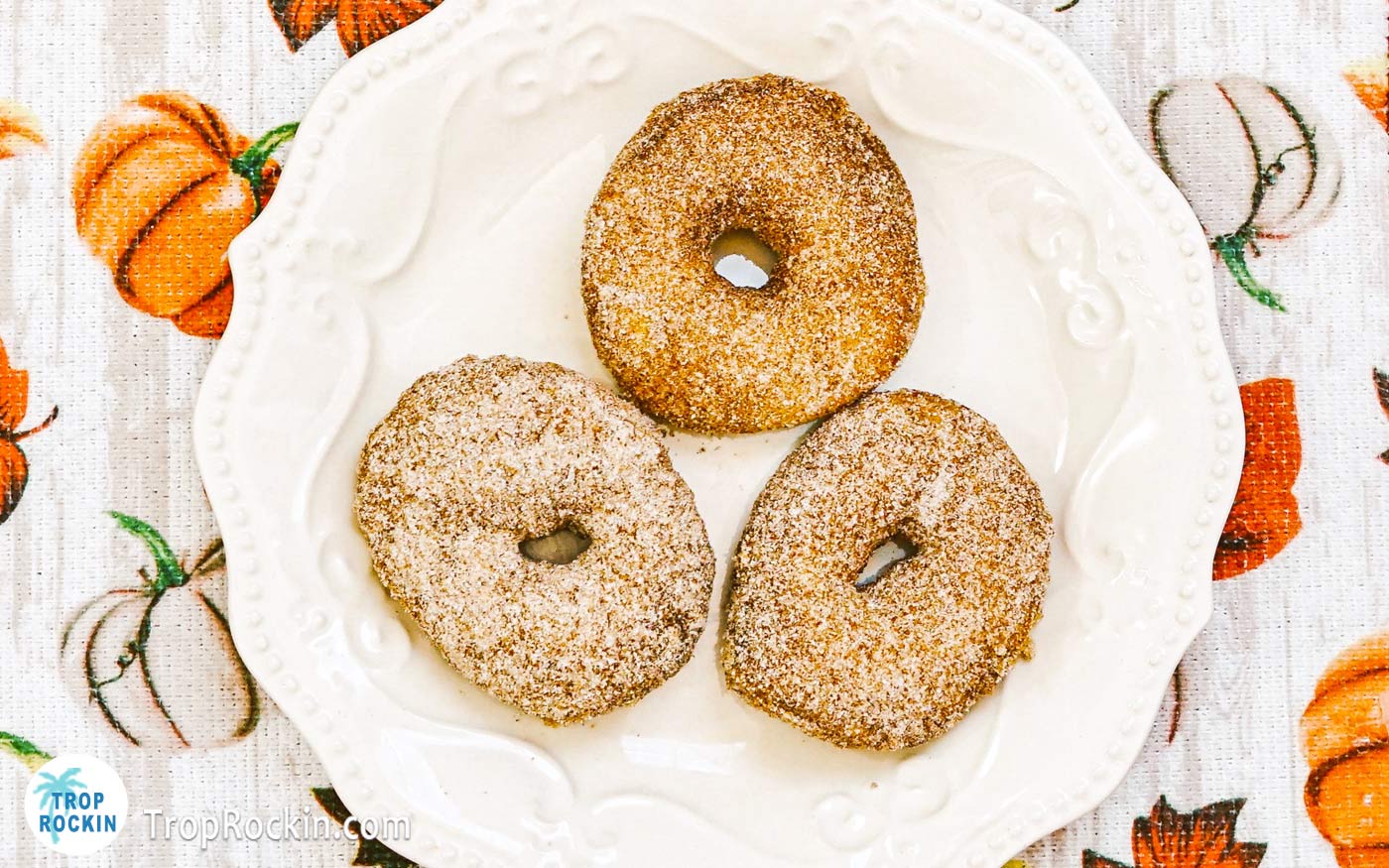 Air Fryer Cinnamon Donuts are another of my latest donut recipes using canned biscuit dough. Just like my Air Fryer Sprinkle Donuts, these cinnamon sugar donuts can be made in 15 minutes with minimal ingredients and provide a break from the somewhat messy process of traditional deep frying.

These air fryer donuts from canned biscuits are light and flaky with a simple cinnamon sugar coating – perfect to enjoy as a warm breakfast treat with a cup of coffee to start the day just right!

Don’t be shy to make a double batch of these cinnamon air fryer donuts – they’re sure to fly off the table in no time at all! 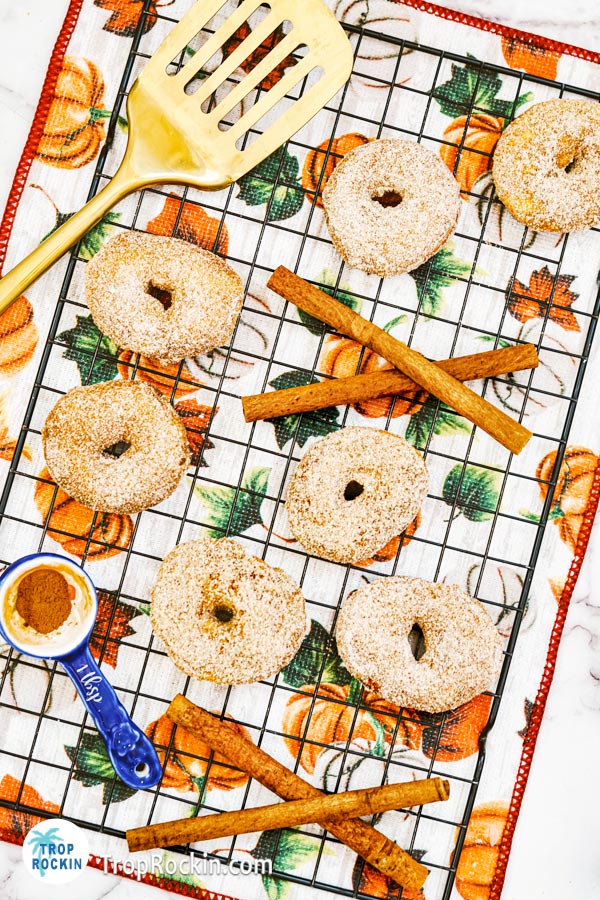 Don’t miss out on these air fryer desserts and treats!

While I love making crispy savory recipes with my air fryer, there’s nothing quite like an air fryer donut! And if you’ve never tried making donuts in your air fryer before then these air fryer donuts from canned biscuits offer a great way to start -super easy to whip up and incredibly delicious!

Using canned biscuit dough rounds instead of traditional donut dough cuts the recipe time down as well as offering convenience. When cooked in the air fryer, all that’s left to do is coat your freshly air fried donuts in a cinnamon sugar mixture to be enjoyed as is or alongside some vanilla ice cream as a dessert option.

No time to make cinnamon donuts right now? Save it for later and pin it! 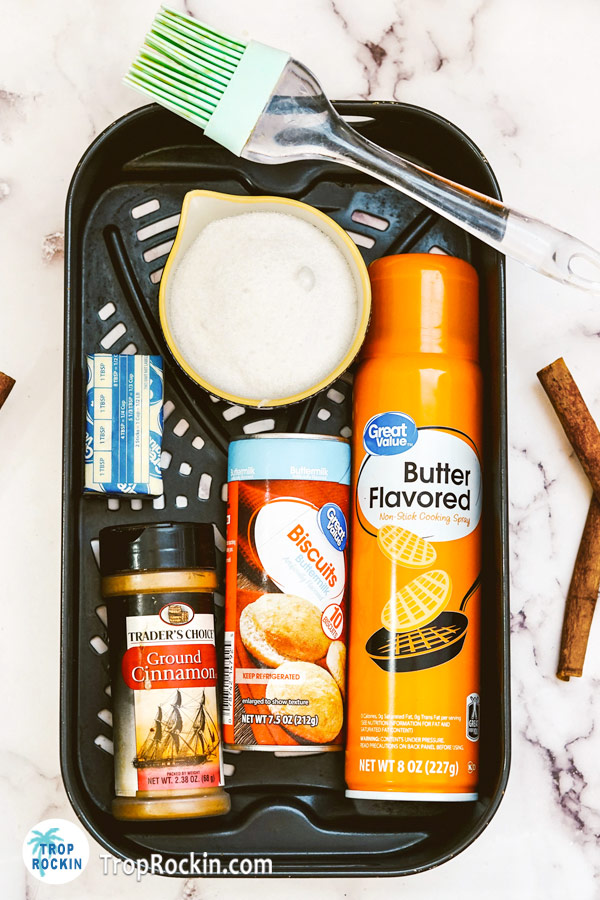 Here are the step-by-step directions for quick and easy cinnamon donuts:

Step 1: Take each biscuit and cut out the center using a 1 inch round cookie or biscuit cutter.

Tip: You can use a shot glass as a quick alternative to a biscuit cutter. 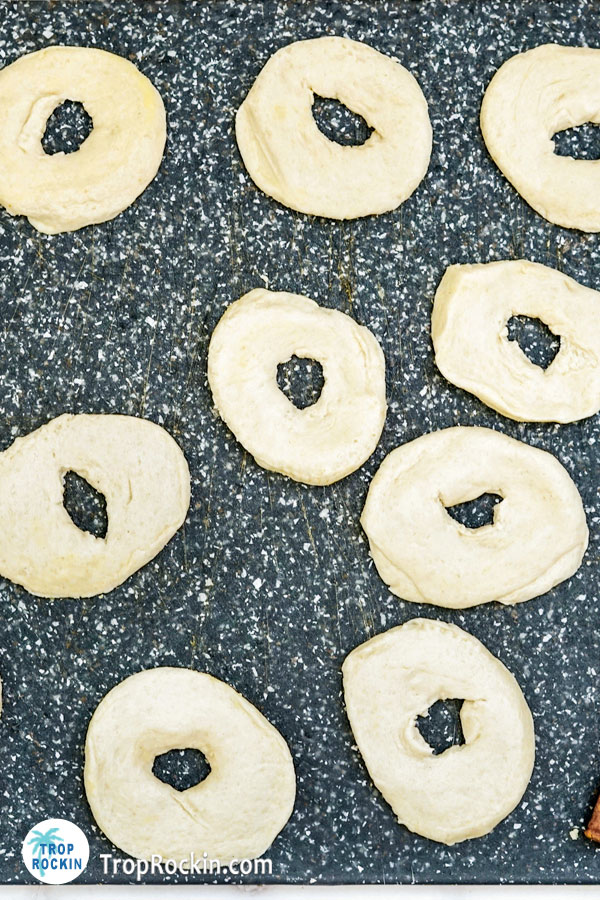 Step 2: An added bonus is the donut holes you can make! Set aside the cut out biscuit dough and roll it into donut holes. Once you’re done making air fried donuts, drop the donut holes in your air fryer basket and follow the same steps for the donuts below. The donut holes will need less time in the air fryer, so start with 3 minutes and go from there.

Step 3: Back to the donuts! Pre-heat your air fryer to 350 degrees. Pre-heating usually takes 2 minutes in most air fryers.

Step 4: Place your donuts in the air fryer basket. Use a butter flavored non-stick cooking spray and lightly spray the donuts. 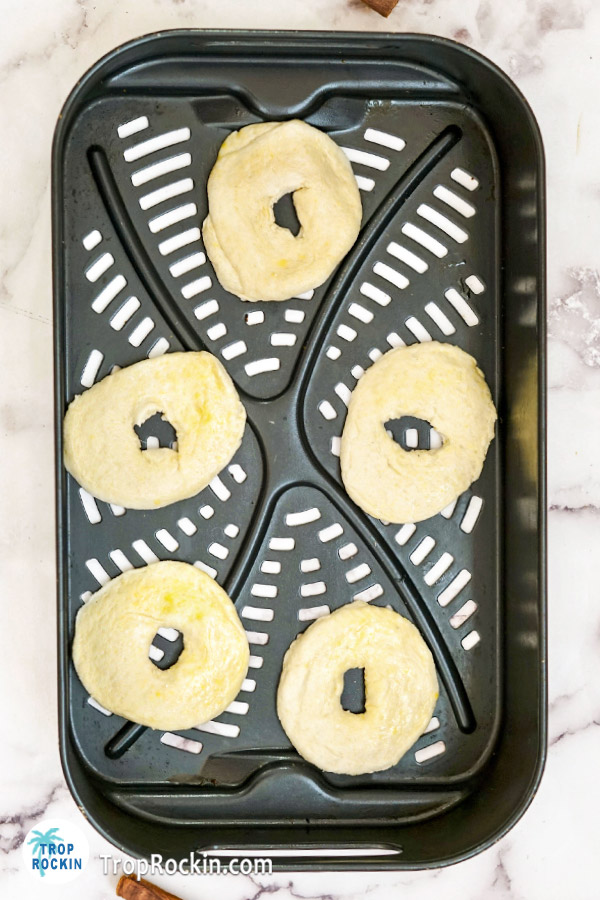 Step 5: Place the basket in your air fryer. Air fried donuts will take 4 – 6 minutes to reach a nice brown. Once cooked, place them on a cooling rack.

Tip: Different Air fryers vary in their cook time. After 4 minutes, check your donuts. If they aren’t ready, continue to air fry for 1-2 more minutes. There are no issues with opening the air fryer to check on their progress. After you’ve made this recipe once, you’ll know the best cook time for your air fryer for the next batch.

Step 6: While your donuts are cooling, mix ground cinnamon with sugar in a small bowl. 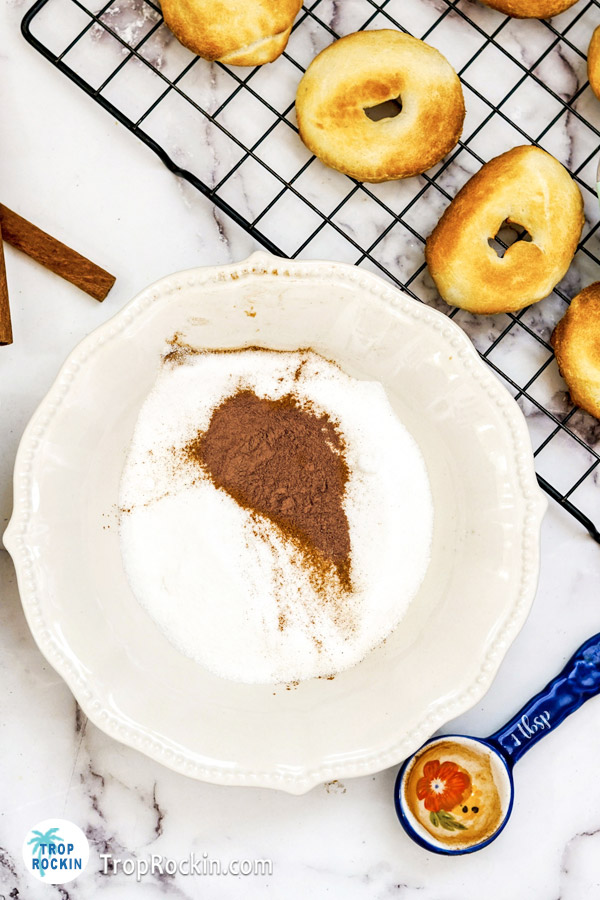 Step 8: Melt your butter in the microwave in a small bowl. Use a basting brush to lightly coat all sides of one donut. 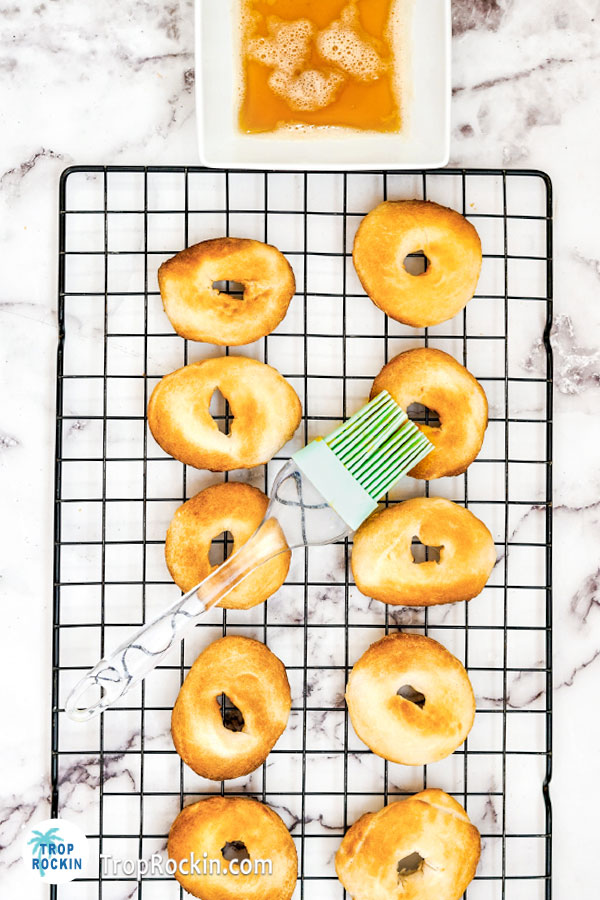 Step 9: Quickly drop the buttered donut into the cinnamon and sugar mixture, covering all sides with the cinnamon sugar. Continue the process with each donut until you’ve got a rack full of air fryer cinnamon donuts. 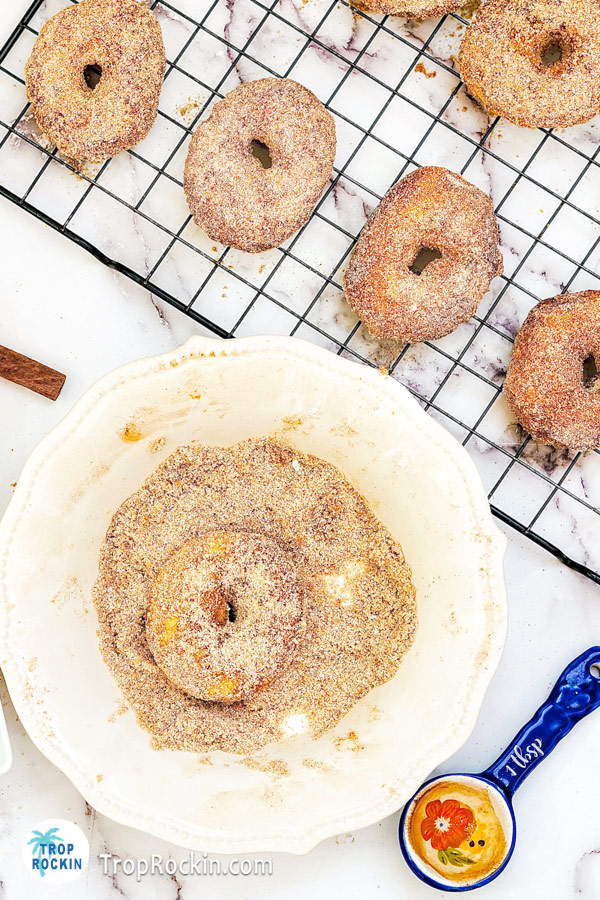 That’s all there is to it! These taste great any time of day, so serve them up for a delicious breakfast, snack or dessert. 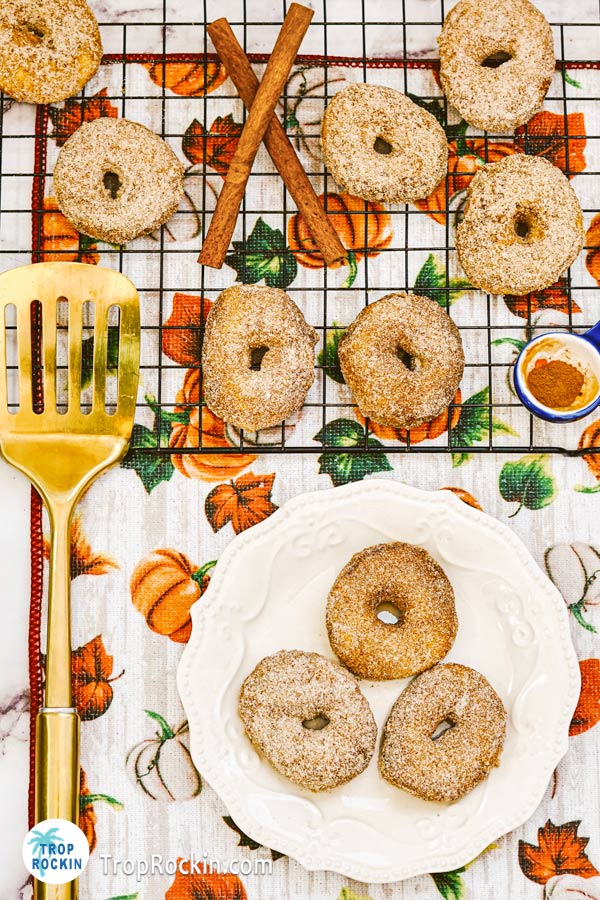 The great thing about most donut recipes is that they are so easily adapted. While I love the simplicity of a cinnamon sugar donut, go ahead and try some of these variations:

Defrost your frozen donuts overnight on the countertop and then warm them in the microwave for about 10-15 seconds.

There’s nothing quite like a fresh cinnamon donut. Using canned biscuits and cinnamon sugar, these air fryer cinnamon donuts are super easy to make in the comfort of your home in just 15 minutes. The family will love them!