It was a Labor Day weekend you are sure to remember with the Charlotte Harbor Parrot Head Club making a big splash for their 10th annual birthday party.

This years theme was “Tropical Vacation,” which explains the whole event with just those two words. The pool side party was a splashing good time with games, live entertainment and plenty of friends to party with a purpose. Teresa Bird, Charlotte Harbor PHC Vice President, was happy to announce weeks before the event that it was “Sold Out.”

Charlotte Harbor PHC  puts fun into a fundraiser with hilarious games punning on the “Tacky Tourist” theme with Door and Window decorating, a frozen wet T-shirt to cool off and the very popular Jell-o and Pudding shot contests.

Friday was amazing with registration the smoothest I have ever seen, given this is a limited head count event. Starting this weekend off with cocktails around the pool with Paul Roush. Door/Window decorating going on while others were testing which hotel room had the best bar cocktails. Yes, there was chocolate flavored tequila going around in one unique room, but I saw no margaritas or blenders while room hopping. Over ten different Parrot Head Clubs showed up to represent and support the fun feathered phundraiser party.

Friday evening under the entertainment tent headlines two memorable bands that help bring attention to this event. Jack Mosley fans were excited to have the whole band back on stage again. Several newbies came around to listen, enjoying their first time hearing the bigger sound. Jack kicked off a memorable evening of originals, several Buffett favs and a personalized Birthday Song for Charlotte Harbor Parrot Head Club. Showcasing songs of old to his newly released cd “Stories” bringing the phlock together stage front as Jack and the band had a colossal performance. I even saw a bottle of Jack’s favorite tequila being passed around after the band had their shots.

Florida weather welcomed The Boat Drunks with a fury of wind and rain leaving a powerless stage. Power? Who needs power when you are Mike Miller, Howie Golub and Josh Houchin singing “Hollow Man” unplugged to an audience who knows the lyrics? The tent was drumming with acoustical sounds from the rain, Howie’s harmonica, Mike playing guitar leading the vocals and Josh coming in for back up vocals had everyone singing along. 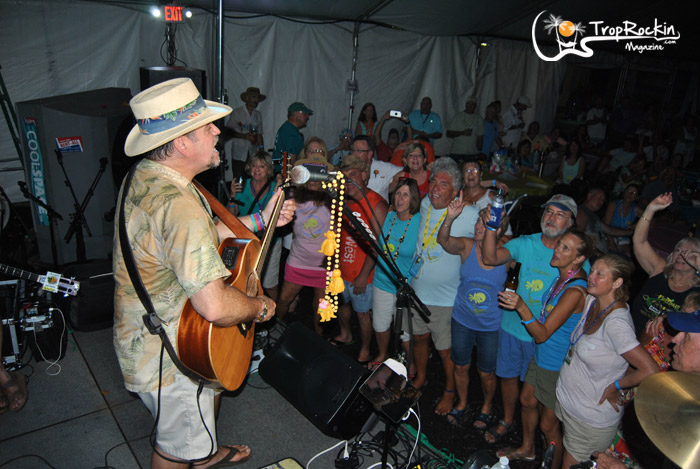 In that moment Mike Miller had captured everyone’s attention on the song and not a soul was concerned with the storm outside. The question lingered on everyone’s mind about what happened to the character in the song “Hollow Man” was asked and answered. Mike Miller said “No, nooo. I won’t be writing a squeal to ‘Hollow Man.’ No, I don’t want to tell anyone whatever happen to the man. I leave it up to you to have your views as to what happen him.”

I later asked Mike “so you never have said what happen to him or planned a squeal?” Mike smiled “I never really thought so many people would be so concerned for the man. I don’t want to disappoint anyone with a squeal. I leave it up to everyone to make their own ending for Hollow Man.” I totally agree with that answer after seeing so many people join in while Mike was singing the song unplugged powerless but not without his own electricity. The evening could’ve ended like that and all would’ve been happy, but it is Florida and the weather went away bringing the stage power back for a full Boat Drunks Band night.

Saturday poolside The Conch Fritters kick off the music to let the fun and games began. Raffles, Silent Auctions, Chinese Auction and 50/50s in full bidding swing with tickets being tossed into Chinese takeout containers. Lunch time provided by Meloni (Raisner) Personal Chef consisted of the most moist pulled chicken, sausage, Greek Orzo salad, watermelon and a choice of chips.

Contests containing Tacky Tourists, Jell-o and pudding shots gave great dessert pleasure and comic relief on this hot afternoon. The Tacky Tourist winners were President Jerry York with his rendition of the way over the hip waist band plaid shorts tropical attire and Patricia Byrski Minnie Mouse Fan attire. All who participated did a wonderful job representing the average Florida Tourists in fun and in the name of charity. Winner of the pudding shot contest goes to a tasty Blue Chair Bay Key Lime Rum Cream served in a tiny sugar cone by Colleen Karcher and her assistant Julie Peacock.

Winner of the Jell-o shot contest was Chocolate Covered Cherry (get the recipe here) by Cathy Polcari and her Dave Polcari. Winner of the Room Door/Window contest Lisa Wessely and Diana DeVercelly. Parrot Head Club with the largest attendees was The Villages PHC but only one villager showed up to collect the award while the others were eating Chinese takeout in the comfort of the a/c.

The evening brings out the country rock crossover sounds of Southern Drawl Band and it was all hands on deck for this energetic show from the popular Party Trained song to JD Edge’s new songs to be released on his new CD soon. The crowd could not get enough of the talented stocked band as each member gets a chance to show off their talents from Paul’s grin as he taps the bass guitar, Larry tapping on the drums to his beats and J.D. stealing the show with his amazing slide of the bow across his fiddle or is it a violin, always heard it said you got have a fiddle in the band – to play in Texas.

Sunday sounds of John Frinzi playing poolside supporting his tropical Florida hat. The Artist showcase gave all the artist a small time slot to play their guitars and showcase their new songs and revive some of their older songs. It made for a very enjoyable showcase of talent (Sunny Jim, John Frinzi, Mike Miller & The Boat Drunks, Steve Tolliver, Jack Mosley, Paul Roush, and The Conch Fritters).

Happy Birthday Charlotte Harbor Parrot Head Club and we look forward to seeing you next year at your new location Punta Gorda Hotel and Suites with Hurricane Charlie’s Raw Bar and Grill.