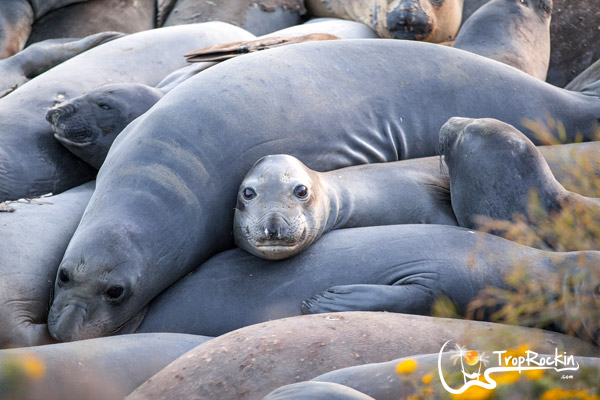 We drove down California’s Highway 1, stopping at almost every overlook and state park.  After nearly 6 hours on one road, we thought we’d never find our way back to the highway.  We depended on Google Maps to guide us, but to our surprise, we were without cell phone coverage all day.

We found a little hotel and restaurant and stopped for directions.  We were shocked to learn we were at least an hour from crossing over to the main highway.  Determined to get off Highway 1 before dark, I might have been driving a little over the speed limit.

The road had finally straightened out.  With no more crazy cliff hugging curves, we were discussing random topics to pass the time.  For some reason, we began talking about road names and our disgust for how deceiving they can be.  For example, why are there roads named “Bay View” when there is no bay in sight?  A few minutes later we passed a sign that said “Elephant Seal Vista” and wondered out loud if anyone told the seals to be there.  We figured they hadn’t read the sign.

With only 30 minutes of daylight left, we were trying to beat the setting sun. I was frantically looking for a pullover area, expecting it to be another dirt outcropping like many of the vistas along Highway 1.   Still not believing we’d actually see seals, my friend rolled down the window to listen.  Unbelievable, we began to hear seals!

The lookout was named Piedras Blancas, which was a well maintained roadside park perched above an Elephant Seal breeding ground.  Plenty of paved parking and a wooden boardwalk along the shoreline.  We flew out of the car, grabbed our camera gear and practically ran to the boardwalk. 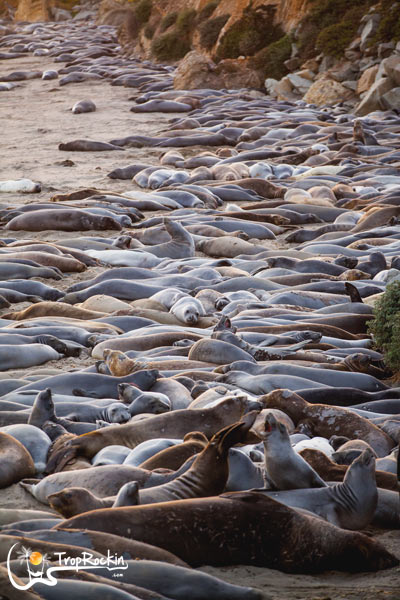 Elephant Seals covered the beach, crawling over each other to find the right spot to sleep for the night.  Seals were letting out random bellows, arching their heads backwards and scooping sand onto their bodies.  Many were already asleep.

Our first few minutes were spent in a photo snapping freenzy trying capture a few great shots prior to sundown.  Afterwards, we stood in awe watching their behavior.  These creatures were awkward on land.  Trying to crawl around on their bellies pushing all that weight with flippers.  We noticed a number of seals had peeling skin and we began to worry that something was wrong. 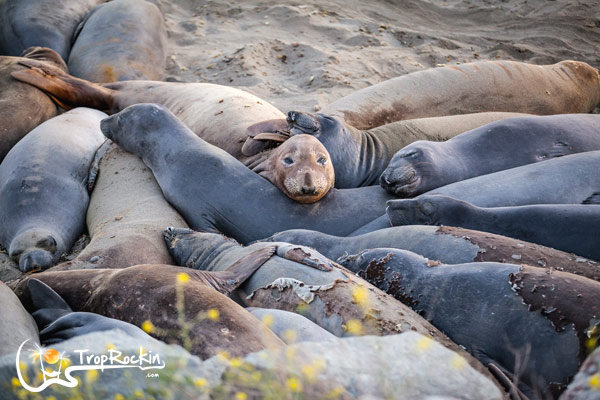 Did you notice the peeling skin in the above photo?  Well, between April and May each year, the females and juvenile Elephant Seals come into California shores to molt.  The younger males appear in May and June and the adult males arrive in July and August.  This was the end of the females and juvenile molting season.  Most of the slick, blue-gray seals lacked the elongated nose that is most prominent on the adult males.  Some seals still had their full, dark furry coat and only had just begun molting.  Perhaps these were the younger males whose molting season overlaps with the females.

As the light of the day was disappearing, a lone Elephant Seal returned to the beach and back into the heard.  He was adorable as he crawled over the sleeping mound of seals until he slid into an open spot.   We hated to leave, but unfortunately there wasn’t anymore we could see. 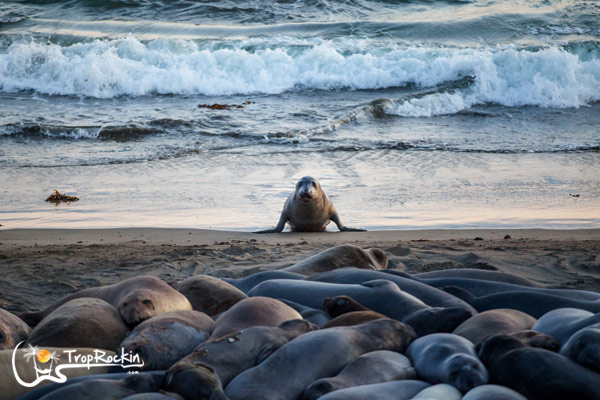 Back on the road, we only had 12 more miles to go to reach the city of Cambria, where we could turn inland towards the main freeway.  All the way back to our hotel we talked about how perfect the day had been and how things worked out just right to get us to the seals.

We thought:  “What if we had stayed longer at Big Sur?”  “Aren’t we glad we decided not to eat at the restaurant where we asked directions?”  Sometimes the best adventures are completely unexpected.