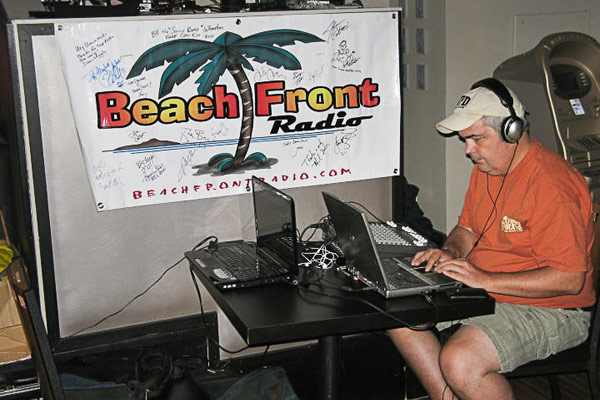 Taking Us to Our Happy Place

When I first spoke with Jeff Allen, of BeachFront Radio, he told me he was talking to Peter Mayer last December and was asked an interesting question. “Jeff, when is someone going to interview YOU?” asked Peter.  So here we are with a story about a non-musician champion of Trop Rock – DJ Jeff Allen.

Jeff is much more excited to talk about Trop Rock and internet radio than himself, but I did find out some facts.  He spent several years in California and is now back in York, Pennsylvania, where he was born and raised.  He’s been a DJ since the early 80s, spinning the tunes at night clubs, weddings, etc.  Radio DJing never appealed to Jeff, as he values an instant response from the audience.  And that’s just what can happen on internet radio, thanks to Facebook and Twitter.

I received a tutorial on Trop Rock radio stations from Jeff and the grand daddy of them, of course, is Radio Margaritaville.  Jeff did guests spots in the early days of Radio Margaritaville and that’s where he began to get into Trop Rock music, versus Jimmy Buffett’s music and other similar artists.  Let’s take a side step here and find out what Jeff’s broad definition of Trop Rock music is.  He describes it as tunes by singer/songwriters that help you escape and take you to your happy place.  I want to be in my happy place all the time!

Back to Jeff’s early days with Radio Margaritaville …  This is where his Amish Beach Party program started.  He started as a guest DJ for about three years with Radio Margaritville until they started airing on Sirius.  He then moved his live show to Radio Jimmy Dreamz.  He began to see how Trop Rock was beginning to grow and wanted to have the chance to attract more fans through Internet radio.  That’s exactly the reason Jeff started BeachFront Radio.

The other integral part of BeachFront Radio is Jeff’s partner, Carol Ewald.  Together they launched the Internet station, and now own and run it.  Internet radio isn’t cheap, as there is a cost for royalties, bandwidth, etc., so BeachFront Radio has corporate sponsors.  There is also the Tropic Mall on their website, where you can find other tropical items, such as clothing and lots of unique and fun gifts.  And there’s the Music Hut, where you can find all the Trop Rock Music for sale you could want. 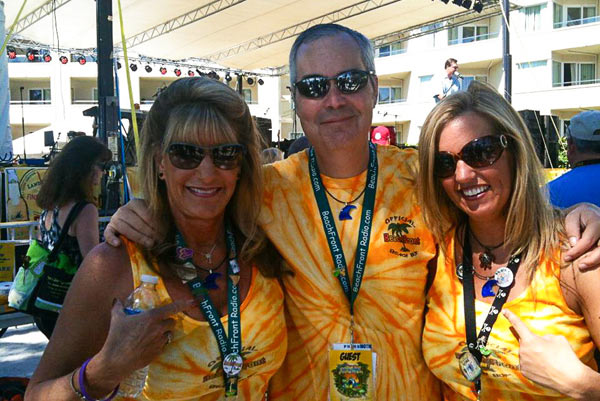 So where did that oxymoronic name, The Amish Beach Party, come from?  Jeff started the Parrot Head Club in his area of Pennsylvania, which is in the heart of the Amish country.  The club started without a catchy label until Jeff was spinning tunes one night at a local event.  He told me the unwritten rule of being a good DJ was to play music that would get the women out dancing.  Some fellow came to him with a request:  Would he play “Weird Al Yancovich’s “Amish Paradise?”  Jeff politely declined, but the persistent gentleman came back with a $50 bill.  “Amish Paradise” got air time and the idea for a unique club name was born – “Parrot Heads in Amish Paradise.”

The “Amish Beach Party” show was born and has been so much more successful than Jeff ever imagined.  He does the show because of his passion for taking Trop Rock music to a new level.  That passion has been recognized by Parrot Heads with the “Amish Beach Party” winning Radio Show of the Year for the past four years at the Trop Rock Music Awards in Key West.  Jeff loves the Facebook and Twitter interaction while on air and loves to personalize the show for his fans.  He read about my Pardi Gras wedding in New Orleans on TropRockin.com and promptly played a tune for me and my new husband.  Now, don’t you know that I’m a bona fide fan because he was kind enough to do that!!

Jeff was diagnosed a couple of years ago with pancreatic cancer.  In the true Parrot Head spirit of generosity, the Phins to the West event started a fundraiser for him a little over a year ago.  You can donate to the fund and receive a purple bracelet showing support for Jeff and his fight against cancer.  Go to the BeachFront.com website and you can see photos of many of the fans who sport the bracelet.  There are fellow Trop Rockers, Parrot Head Club members and even Howard Livingston’s two Golden Retrievers sporting purple power!  Living Like A Pirate, a BeachFront Radio sponsor, even created a special purple t-shirt for sale to help the fund. 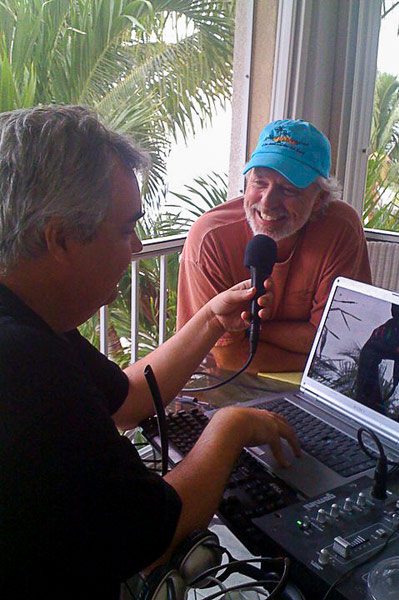 Jeff has also been instrumental in producing Trop Rock recordings for charity.  “Yule Love Trop Rock” was a Christmas CD that came out two years ago.  Proceeds went to help with melanoma research.  The current recording out is called “Taking Care of Our Own” and not one artist has turned Jeff down in donating their time and music.

Carol said that there is no doubt that Key West is Jeff’s favorite place.  They’ve had great times there and he has many friends in that area.  In fact, she describes Jeff in this way:  “Jeff has a way about him and most people like him the minute they meet him.  He has a heart of gold and truly cares about people.  Raising money for good causes is an important dream for him.  He donates a lot of his time trying to “give back.”

Jeff Allen shows his caring spirit through his work and passion.  We all know that Parrot Heads have a love for charity and helping others.  Jeff has been overwhelmed by their show of love and support for him.  My prayer is that he will have a long time ahead of him to do what he loves: in his words, “Keep Trockin!”