Just south of Clearwater Florida is my favorite unspoiled Florida state park, Honeymoon Island. The amenities are well maintained and offer all the necessities for a day of walking the nature trails and playing on the beach.

Many people know about the 4 miles of pristine beaches along Honeymoon Island, but it also provides the best environment to enjoy Florida’s wildlife.  I recommend spending a few hours walking the 2 ½ mile nature trail located at the north end of the barrier island. Here, you’ll be able to get close to an impressive amount of wildlife through out the trails such as Gopher Tortoise, raccoons, armadillos and just about every bird in the region.

Gopher Tortoises are protected in Florida. In 1988 they were added to the Florida endangered species list , but population numbers continue to decline primarily from a loss of habitat. Fortunately, Gopher Tortoises on Honeymoon Island are living the good life. If you walk slowly, you’ll happen upon several of them as they feed on the grasses.

They are quite accustomed to humans, as I was able to crawl across an open area for a better vantage point to take pictures. I was only given a few cursory glances as the tortoises continued chomping grass. They seemed completely indifferent to what I was up to until I moved too quickly for their liking when I stood up. 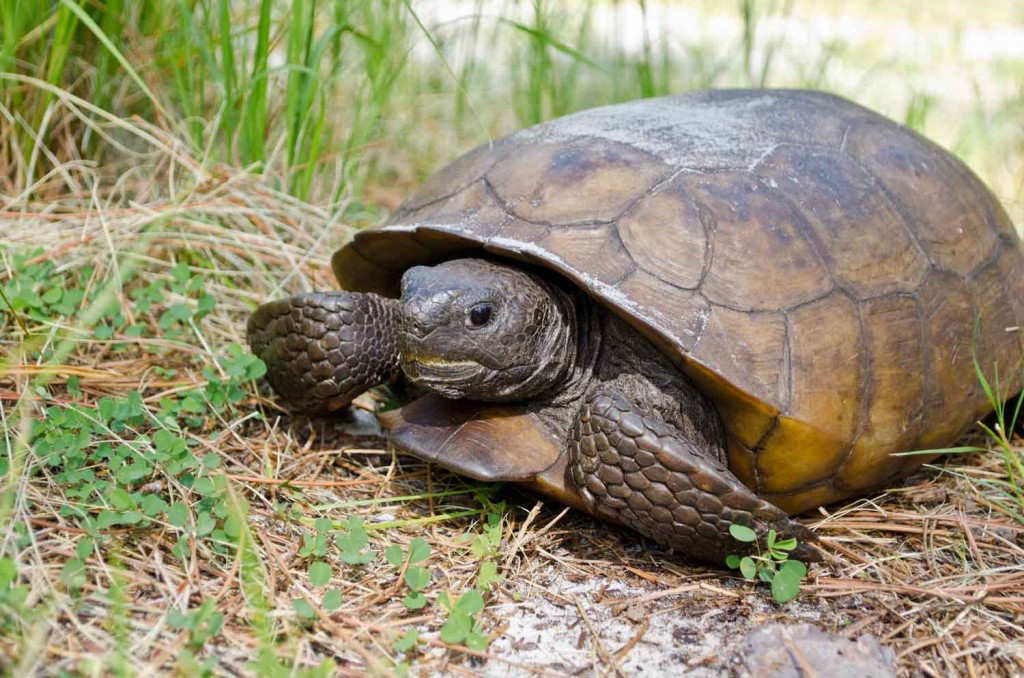 Other animals have found refuge in the park and away from the threat of becoming roadkill. One raccoon darted out and stopped to watch me for a few minutes before disappearing into the woods. Armadillos were foraging throughout the low lying brush. I found them easily by listening for a constant rustling in the denser vegetation along the edge of the trails. As I followed along with the sound, I was rewarded when the armadillos crossed in front of me.

I wondered at the time if they were blind, as they rarely noticed me and if they did, it wasn’t until they were about 3 feet from my lens. With a little research, I learned they have very poor eyesight but a keen sense of smell. 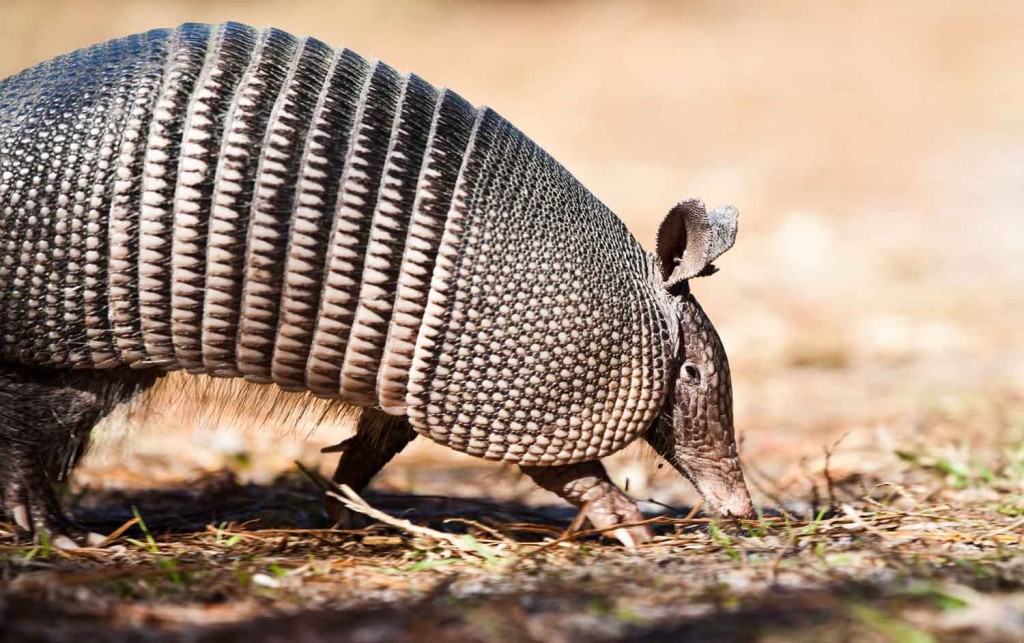 One of the best features of Honeymoon Island are the endless birding opportunities.

Osprey nests can bee seen just about everywhere you look and these large birds seemingly never stop hunting for fish. You can see Osprey flying low with fish grasped in their talons searching for the right branch to enjoy their meal. One Osprey scarfed down a fish in a tree near me.  It was a little unsettling to watch how quickly he tore that fish apart. 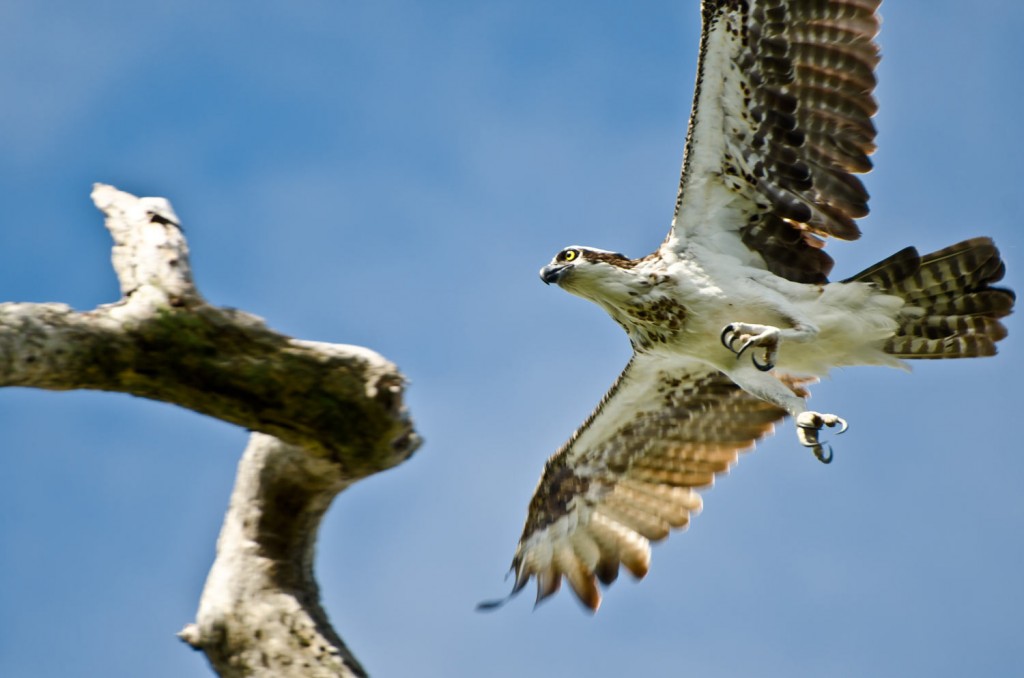 Where the trail meets the ocean, wading birds were abundant. A Yellow-Crowned Night-Heron (juvenile) walked along the marshy area and a white Egret watched my every move from a clearing behind the sand dunes. A Great Blue Heron and Red Heron were seen along the shore and plenty of sea gulls were standing, facing the wind along the beach. 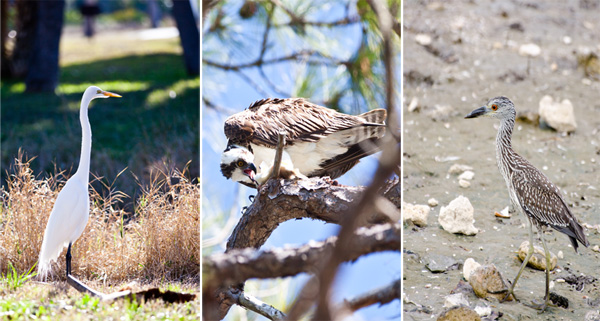 There were 2 impressive bird species along the trail that I hadn’t seen up close before. First, a pair of Bald Eagle’s who have nested for the 12th year in a row on Honeymoon Island. These two eagles have returned every year since 2008. When I visited last spring, there was a small black eaglet peeking out from the nest. Its head would rise above the nest waiting for one of the adult eagles to bring back a snack while the other adult eagle acted as a look out on a nearby branch.

Juvenile Bald Eagles are primarily brown and in 4-5 years this eaglet will be a full grown adult weighing in somewhere between 6-14 pounds. To protect the eagles, a large portion of the trial is closed to visitors during nesting season. The designated viewing area allows a good view of the nest, but I recommend carrying a small pair of binoculars or a long-range zoom lens to get a good look at these majestic birds. 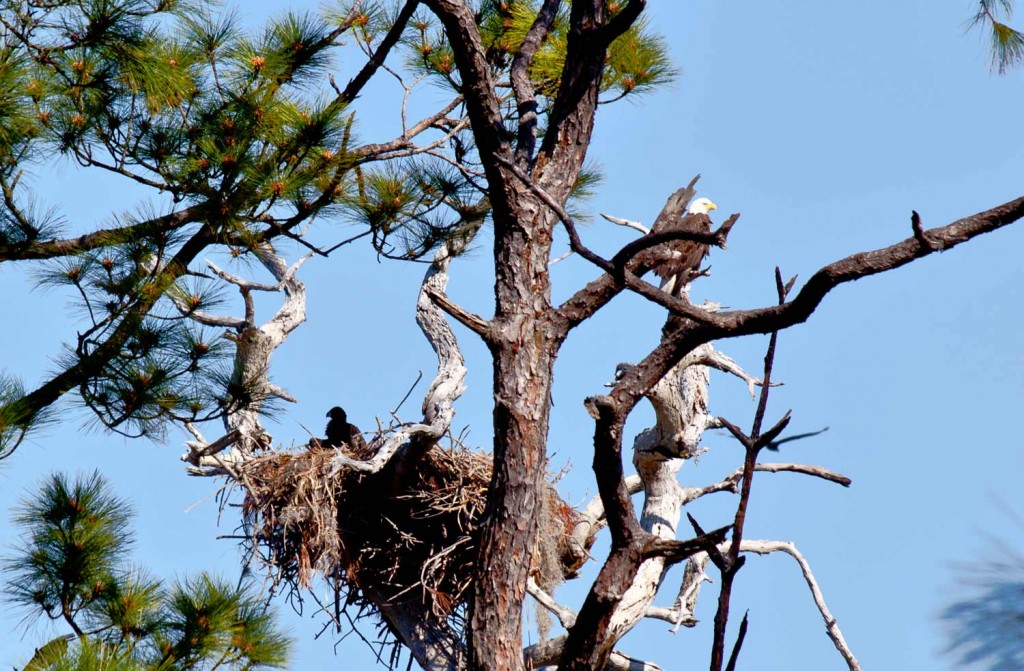 Bald Eagle on look out while baby eaglet waits for food

The second impressive bird species took me by complete surprise. I did not expect to see Great Horned Owls. When first entering the nature trail, signage points to the nest, but it is difficult to see from this vantage point. The best spot is towards the end of the loop where the nest is close to the trail.  The owls are best viewed closer to sunset; since they are nocturnal and stay hunkered down during the day.

Great Horned Owls are very large, typically around 2 feet tall and a wingspan of up to 5 feet, but despite their size, I found them difficult to spot. Their speckled coloring of dark browns and rust allowed them to easily blend in with the trees. By listening to the hoots, I could find the general direction of an owl and was  able to follow one as it flew from tree to tree. Eventually, the owl stood in the crook of the tree just above its nest, which made for a great picture! 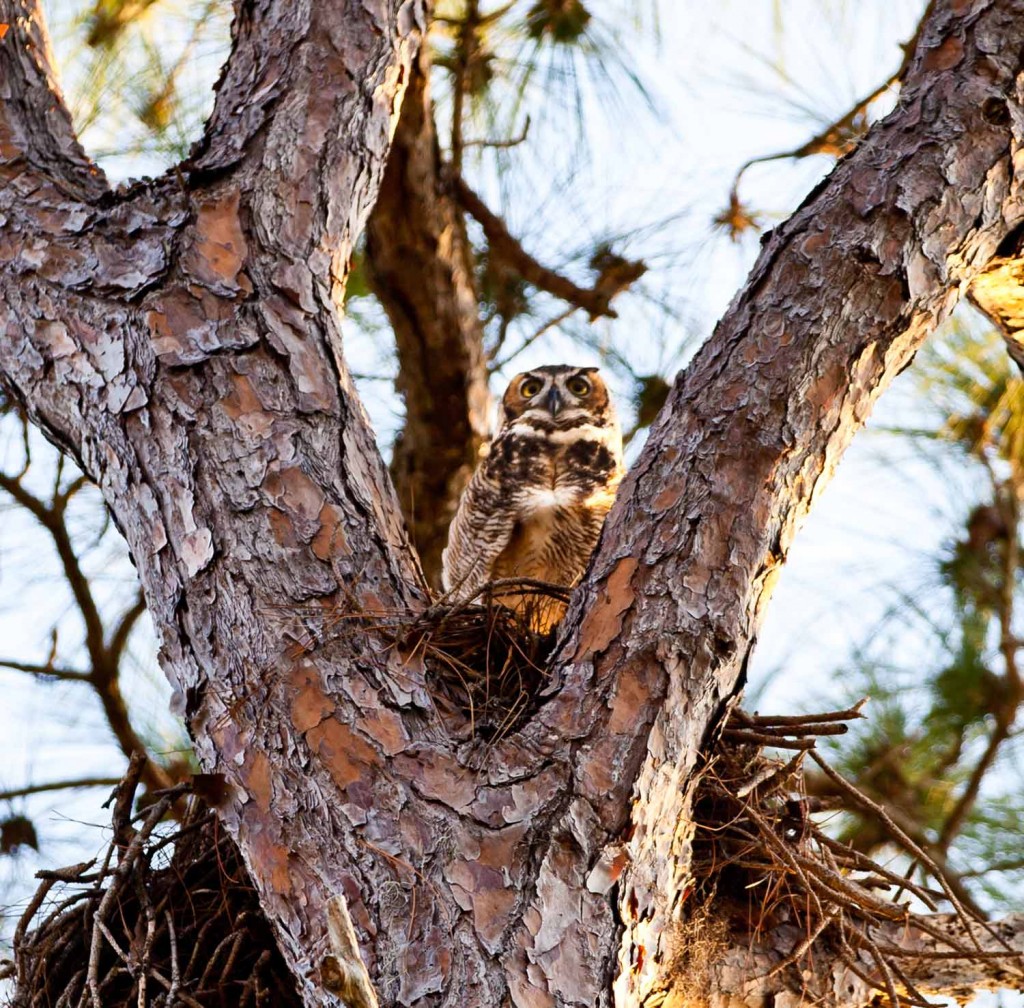 What a gorgeous Great Horned Owl

Although you may want to head straight to the beach when you arrive at Honeymoon Island, I hope you’ll take a few hours and explore the nature trails.

I believe the best place to see animals are in their natural habitats and Honeymoon Island provides an opportunity you won’t want to miss.

Know Before You Go:

Wow...I've never seen a Great Horned Owl on the beach. Nice find. From now on I am going to keep my eye out. Honeymoon Island is my favorite spot. It is where I do my seashell collecting and photography. I have a year pass to the Florida state parks which is just a little over $100 for the entire year and Honeymoon Island is included as one of the state parks. Enjoying your site!

Andrea - the quickest route to the Great Horned Owl nest is from the back side of the nature trail. If you enter the trail from behind the playground and walk for about 10-ish minutes, you'll be under the nest. It's in a large tree on the west side of the trail. Watch for them at dusk - you'll certainly here the hoots!