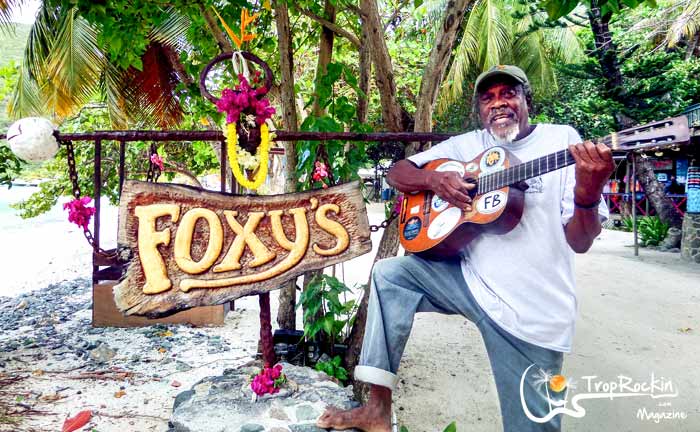 I was on a fantastic cruise recently in the British Virgin Islands and when I saw the itinerary months ago and realized we had a stop in Jost Van Dyke, I knew just who I wanted to meet.

You don’t have to listen to a great deal of Trop Rock music to hear references to Foxy’s Bar on Jost Van Dyke. Would I be able to meet the iconic Foxy?

We anchored in Jost Van Dyke early enough in the day to take a boat tender over in the evening for some late night dancing and fun. I was told by the DJ that Foxy was off island, but found out later that he would be there the next morning. So I was back on the tender after breakfast the next day and off to seek out Foxy.

The quiet morning ambiance at the bar was far different than the rollicking night before. I was directed to the office and climbed a staircase to a large, open air wooden room and was immediately met by Foxy himself. He was dressed modestly, barefooted and smiled with a true island warmth when we met. We sat down with his assistant, David Dietrich, and Foxy started answering questions. I found out he’s about 75 years old and started the bar back in 1968. He found the name “Foxy” in a magazine, thus re-inventing himself. 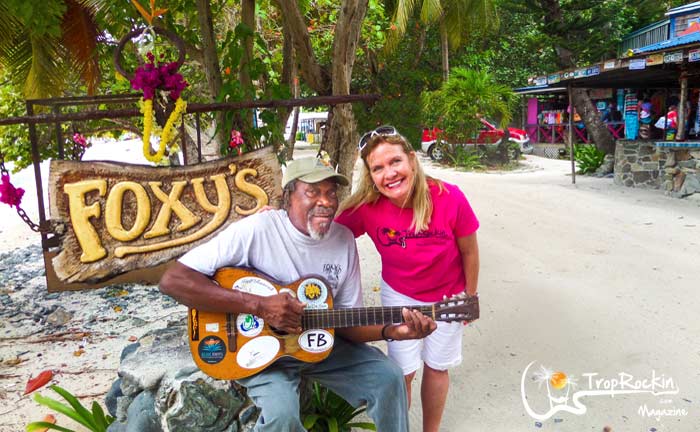 Foxy was proud to let me know that he had been made a citizen of Britain by the Queen herself and is also an honorary Kentucky Colonel.

But he was most excited to tell me about his latest project – “Foxy’s Music School.” There are only about 300 people that live on Jost Van Dyke, and he lamented that the children aren’t learning about music. A few years ago, he started to gather monetary donations to start a music school. Foxy and David were excited to show me the area behind the bar that was to have its grand opening soon as “Foxy’s Music School.” A music philanthropist had donated almost 100 instruments and I met an artist from Japan who was putting the finishing touches on the new sign. 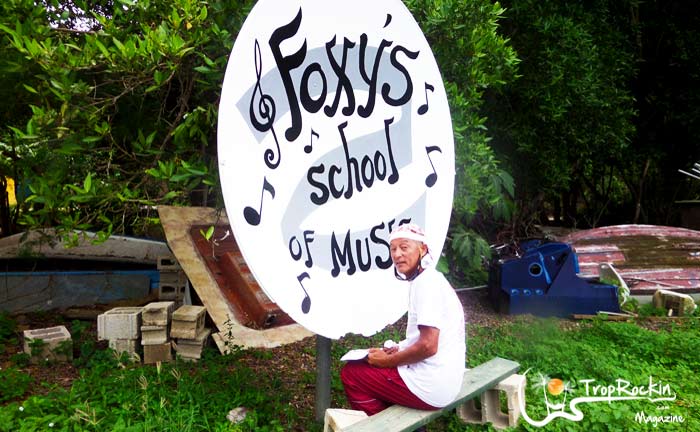 Foxy started the Jost Van Dyke Preservation Society a few years ago and his long range project is to start an island university. He is currently raising money and buying land behind the bar. He ticked off on his fingers what he believes the young people on the island should learn: health, education, conservation, fishing and agriculture. I had been visiting with the most progressive visionary I’ve ever met!

Foxy is a singer, songwriter and poet and after we walked back downstairs to the bar area, I witnessed Foxy the poet. He repeatedly asked tourists milling around the merchandise area near the bar where they were from. He immediately went into performance mode with lively impromptu poetry about Texas when two couples answered they were from the Lone Star State. In a few minutes, he repeated the show with more poetry for some folks from Canada. He then grabbed his guitar and strummed a few tunes for me before I left. 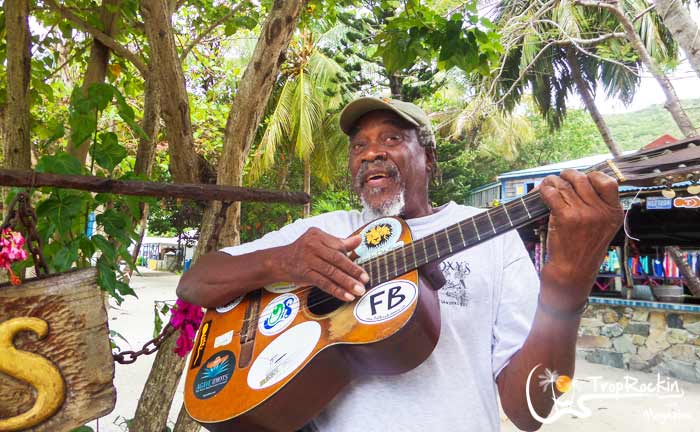 I believe I had the best experience of anyone on the cruise – I met and got to know the iconic Foxy. And I can now say this legend is my friend!