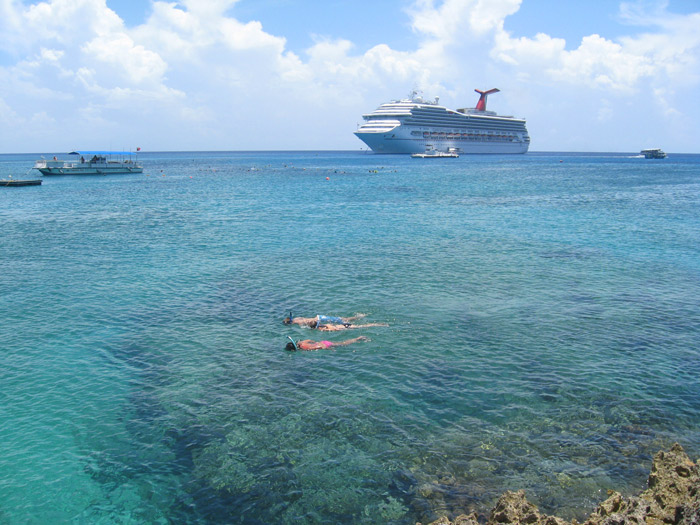 If you are familiar with the term “Trop Rock” and the artists that perform that style of music, you know that many have connections to tropical islands and return to those spots every year – a chance to reconnect with the sea and sunshine that helped inspire the music they make. One such artist is James “Sunny Jim” White. James and his wife, Adela, have a history with Grand Cayman that stretches back over thirty years.

As Adela explains, “That’s where we met and fell in love. We got married and raised our twin daughters there. We still have a lot of good friends there, so James and I go back as often as we can. We’ve also taken several fan groups down and introduced them to our island home.” So, with James and Adela as our “guest hosts”, let’s take a closer look at Grand Cayman.

The largest of three coral “sister islands” – with Little Cayman and Cayman Brac – Grand Cayman is located in the western Caribbean, 180 miles northwest of Jamaica and just over an hour by air from Miami. Covering just 76 square miles, almost half of the island is wetland. Abundant coral reefs make it one of the best spots in the Caribbean for snorkeling and sport fishing. 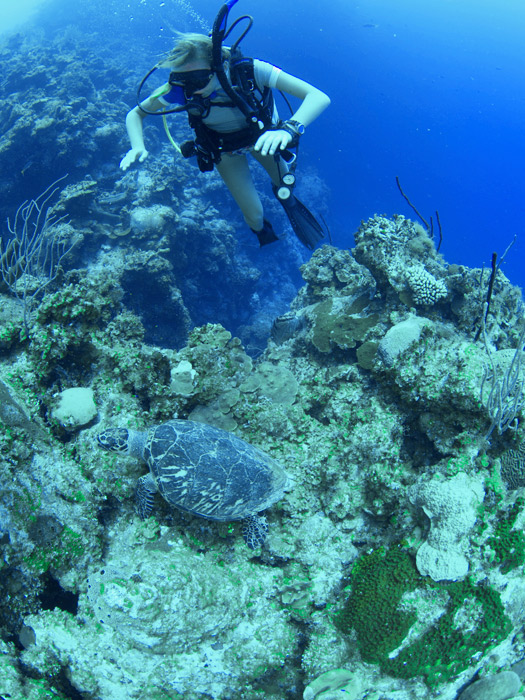 Christopher Columbus discovered Cayman Brac and Little Cayman In 1503 during his fourth voyage to the New World. He named the two islands “Las Tortugas” (The Turtles in Spanish) because of the dense population of sea turtles he encountered. In 1586, Sir Francis Drake changed the islands’ names to “Caymanas” after the Carib term caiman for the resident crocodiles.

During the 1730s, pirates, shipwrecked sailors and deserters from Oliver Cromwell’s army in nearby Jamaica began to permanently settle the island. Joining this small population of European settlers were African slaves who were brought there and used for farming. Until Jamaica declared its independence from Britain, in 1962, The Cayman Islands and Jamaica were governed as a single colony. The Cayman Islands remained a British Overseas Territory, with their own government and constitution, and currency known as the CI dollar.

Money: Most shops will accept both CI dollars and U.S. dollars, along with most major credit cards.

Weather: The Caymans enjoy tropical weather throughout the year, with daytime temperatures averaging in the mid 80’s during the Summer season from June to early December. December through April is considered rainy season, when visitors can expect short rain showers most mornings and average temps in the low 70’s.

Cruise ships: Of the three islands that make up the Caymans, Grand Cayman is the only one with the capacity to host cruise ships, with most passengers coming in through the center of the Cayman’s capitol city, George Town.

Tipping: Gratuity is often already added to your bill. If it isn’t, 15% is standard.

Grand Cayman Things To Do:

Stingray Sandbar Snorkel Trip: This will be the highlight of your vacation, and it starts with a boat ride to a shallow sandbar in the North Sound. From 50 and 100 wild Stingrays live here and they love to be hand-fed, not at all shy about being around people. 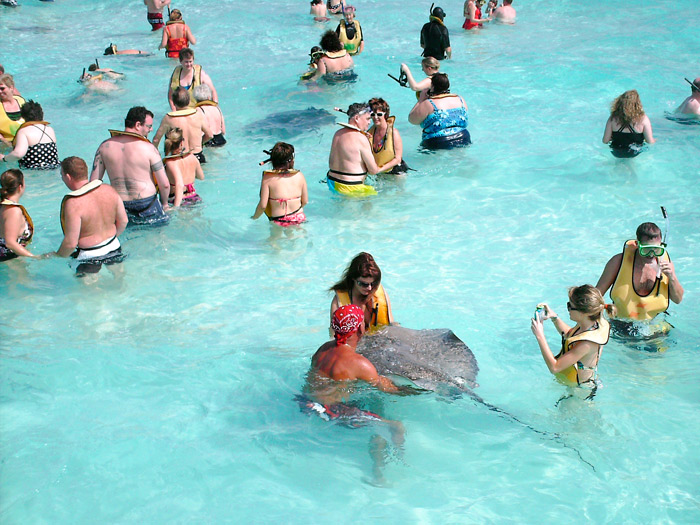 Catamaran Sails: Red Sail Sports operates a fleet of large, custom built catamarans for day snorkel trips and evening sunset and dinner cruises. This is wonderful way to enjoy Cayman’s waters – aboard a luxury catamaran staffed by friendly folks. I especially enjoy the sunset sails when we cruise up and down 7 Mile Beach or the North Sound as the sun goes down.

Pedro St. James: In the 18th Century, a wealthy Englishman, using slave labour from Jamaica, built a 3-storey building called Pedro St. James (we knew it as Pedro Castle when we first moved to Cayman). This is also where democracy was born in the Cayman Islands as it served as a meeting place for early settlers. In the 1990s, the Government of the Cayman Islands bought the property and restored the Great House. The photos for James’ Tropical Trader CD were taken at Pedro St. James.

George Town: Strolling through the waterfront you can visit the National Museum and pop into the National Gallery to see works from talented local artists. The Elmslie Memorial church has an incredible wooden ceiling carved by shipwrights back in history. Don’t miss Heroes Square, the Legislative Assembly building and the local craft market.

Cayman Turtle Farm: Located on Boatswain’s Beach, features touch tanks where you can and pick up turtles of all sizes and ages. It includes a swimming pool with waterfalls and nature trails. Entry fee is U.S. $45 for adults and $25 for children.

Seven Mile Beach: Actually only five and half miles long, it has beautiful white sand and crystal-clear water. Once you see it, you’ll know why it is consistently ranked among the Caribbean’s best beaches. Most of the island’s resorts, condos and hotels are on the beach, but FYI there are no “private” beaches in Cayman (because they all belong to the queen). You can access SMB wherever you see a ‘Beach Access’ sign along the West Bay Road. Public Beach on SMB has clean changing rooms, beach cabanas and a children’s playground shaded by Casuarina trees. 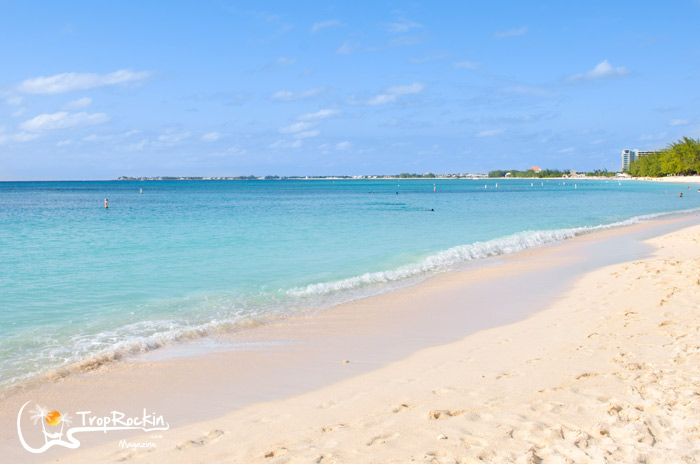 Grand Cayman Where To Eat

We asked “Sunny Jim” and Adela to tell us some of the best places to dine in Grand Cayman and here are a few of their favorites:

(CLOSED – No longer in business) Hemingways: A sentimental favorite from our Hyatt Regency days when Hemingway’s was James’s evening venue for many years. We spent many great evenings here in the restaurant and the bar. Located on the beach, it is now under new management since the Hyatt Regency Resort was damaged during a hurricane several years ago. Reservations are definitely recommended for both lunch and dinner.

My Bar: This is one of the best beach bars in the Caribbean, certainly in Cayman. Located at the Sunset House Hotel south of George Town, it serves great rum punch, plus all your favorites. (Adela’s) favorite lunch – conch fritters and Greek salad.

Eats Café: Our history with Eats goes back 30 years! We’ve been regulars here since before the girls were born, and after they arrived, we spent many Sunday mornings here enjoying blueberry pancakes. Eats is kid-friendly and it serves American food at affordable prices.

Rum Point Club: Located on Grand Cayman’s quiet North Side, Rum Point is the perfect place to chill out. Famous or its mudslides, The Wreck Bar and Grill has some of our favorites: Caybrew fish and chips, jerk pork sandwiches and outstanding cheeseburgers. We’ve enjoyed many, family outings here as island residents and returning guests. And if your go, be sure to say “hi” to JB and Carol for us! 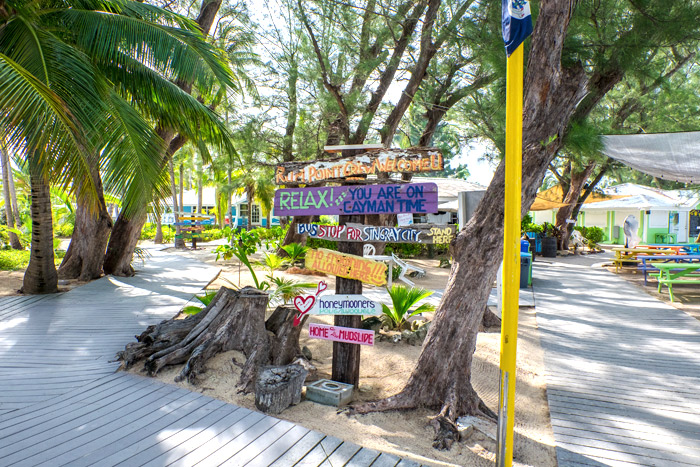 Travel Tip: Grand Cayman is a small island and roads are very well maintained..a fun way to see it is to rent an automobile and hit the road! Taxis are reliable, with drivers obliged to display an official ID with their taxi number. Public buses are small mini vans that also display an official sticker in their front window. – per previous locals James & Adela

Grand Cayman Where To Stay

Wyndham Reef Resort: The best resort away from the crowds and every room is beach front. Located in the East End, this is the place to stay for total relaxation. The Wyndham offers an all-inclusive option that is worth checking into as eating out in Grand Cayman is a bit pricey. To help curb costs, there is a Subway sandwich shop on site, which is an excellent meal to enjoy while lounging on your beach chair. All the typical water sport activities are available and there is a great beach bar.

Westin Grand Cayman: My favorite hotel on Seven Mile Beach. The rooms are gorgeous as well as the view if you opt for an ocean front view. Swim up or walk up pool bar and service to your lounge chair on the beach. On site restaurant is reasonably priced for the island and the food is good. Cheaper options and good food are also available within a short walk from the resort. The beach is incredible and it’s located in the middle of Seven Mile Beach, making it a little more comfortable without too many people. As with anywhere you stay on Seven Mile Beach, vendors will walk up and down with their wares to sell, but we found the few we encountered to be pleasant and did not bother us once we said “no thank you.” 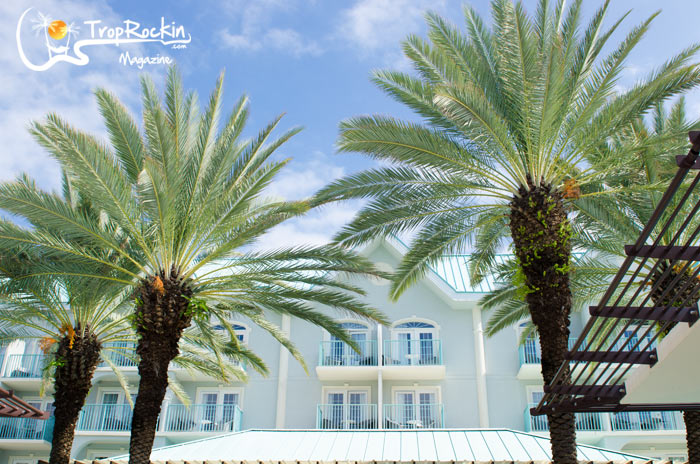 Margaritaville Beach Resort: I am partial to a Margaritaville Resort. The carefree vibe is always present and the Jimmy Buffett quotes and song lines peppered (or when talking about Jimmy Buffett, is that salted?) through out the resort are up lifting. Relax in one of the several pools on the property and get a drink from the swim up bar. Water sport rentals are available and several restaurants are on location. Located closer to Georgetown, getting into town is easy and convenient.

Like what you see? If you’d like more info on visiting this destination, or anywhere else in the world, call me today at (404) 642-4749 or email me at [email protected] Come by my website anytime for the latest travel deals: Travel By Georgia

Save it for later, Pin it! 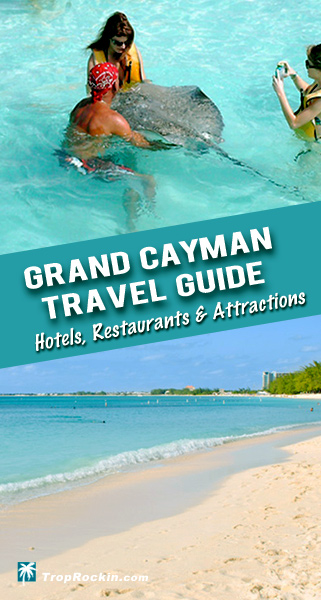