As one of the newest house concert venues to start up in the Southwest Florida region, the “Sun and Fun Tiki” is an all around fantastic experience.

The setting is a true Florida get-a-way boasting lake front views, Tiki Hut performance stage, a large backyard, screened in pool, a little dock and future plans for a tropical backyard Tiki Bar. With a full schedule of concerts confirmed for 2017 and bookings for 2018 in progress, it’s quickly becoming a Trop Rock destination.

Geri and Mike Salitsky were dining at a Margaritaville Cafe (many years ago) where flashes of Jimmy Buffett concerts and tailgate parties flickered across the restaurant TV screens. Getting a glimpse into the Parrot Head world, they knew it was a community they wanted to join. Already fans of Jimmy Buffett’s music, they soon found their local club, Western New York PHC, and promptly became “official” Parrot Heads.

Next came their discovery of the Trop Rock music genre and they were hooked. 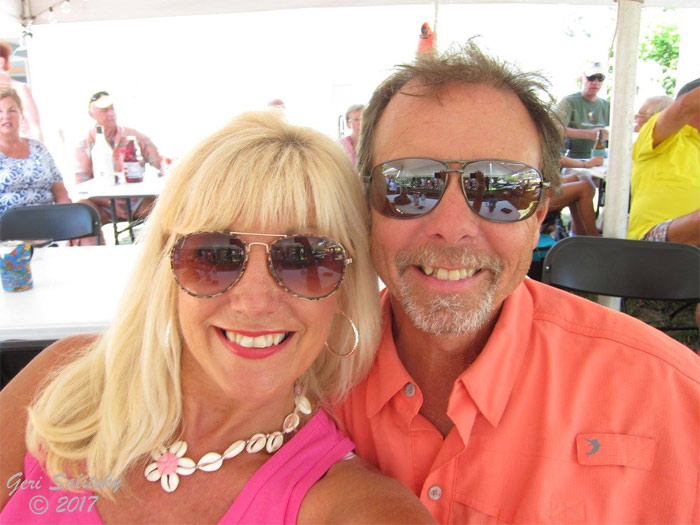 A little more than 3 years ago, the Salitsky’s purchased their future retirement home in the Port Charlotte / Englewood area of Florida, often thought of as the mecca for Trop Rock music in Parrot Head circles.

At the time, Mike had a few more years before he could retire so they visited their Florida paradise as often as they could. Geri founded the Sun and Fun MeetUp group, which now has over 800 members, to make new friends and in 2015 the Salitsky’s finally made Florida their permanent home.

Settled in for almost a year and ready to create their dream party home, Geri and Mike had a vision and suddenly a house concert booking, but nothing had been built. Quickly jumping into action last December they fretted over when their building permit would be approved, if they had time to build the stage and if their contractors would have the thatch roof done in time. Everything needed to be completed in just two months!

The necessities came together just in time for their first concert. With the permit approved, construction began. Mike got down to business building a temporary stage. With such a short time crunch, the final stage would be completed after the concert. Just 4 days before the concert the thatch roof was installed and it was enough to pull off a successful event! 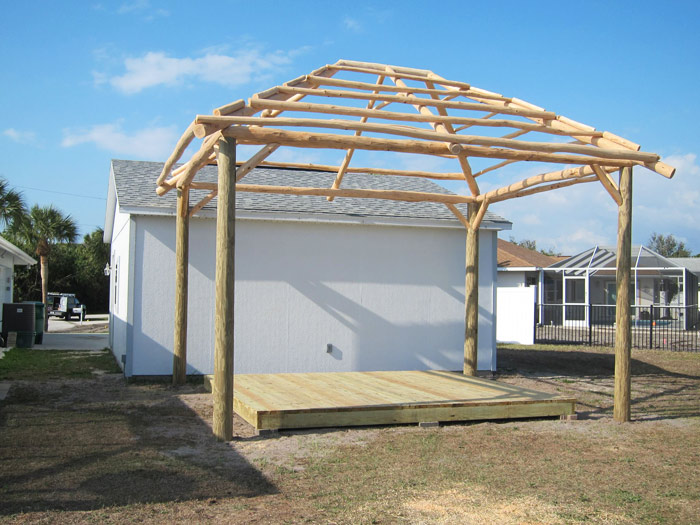 Geri and Mike didn’t stop there. The “Sun and Fun Tiki” venue is designed to make everything easy and comfortable for both artists and attendees. Knowing artists would appreciate plenty of shade from the bright Florida sun, the final large stage is complete.

Mike and Geri also invested in a full sound system for visiting artists. Without the constraints on artist to transport heavy equipment, it opens up the possibilities to book singer/songwriters from all across the country.

Plus, not forgetting the comfort of their guests, the Salitsky’s invested in several tents creating shady areas for attendees to enjoy the music. 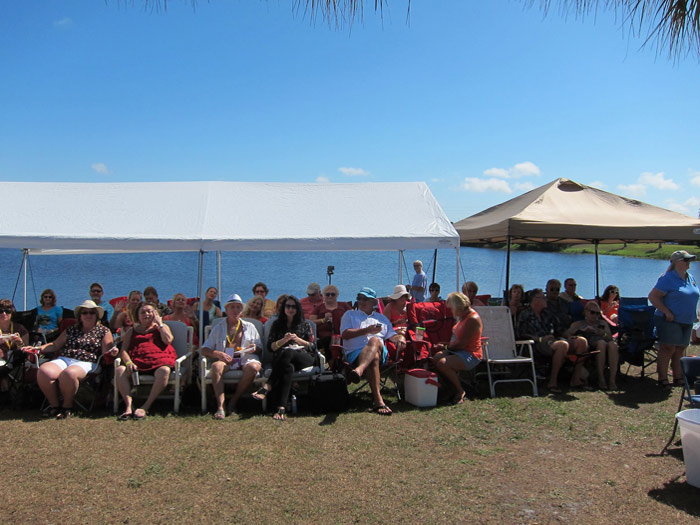 February 19, 2017 is the day Geri and Mike hosted their first house concert. A whirlwind ride, they couldn’t have been more pleased.

Jim Hoehn, a Trop Rock artist from Wisconsin planned to be in Florida for just one weekend and he was looking for a gig. Geri and Mike had never heard Jim Hoehn perform, but to the urging of a good friend they booked him. Of course, it was a huge success! Jim is known for his entertaining stories, high energy, intricate song plots, quick wit and an amazingly smooth voice. No doubt he’s a star in the Trop Rock genre. 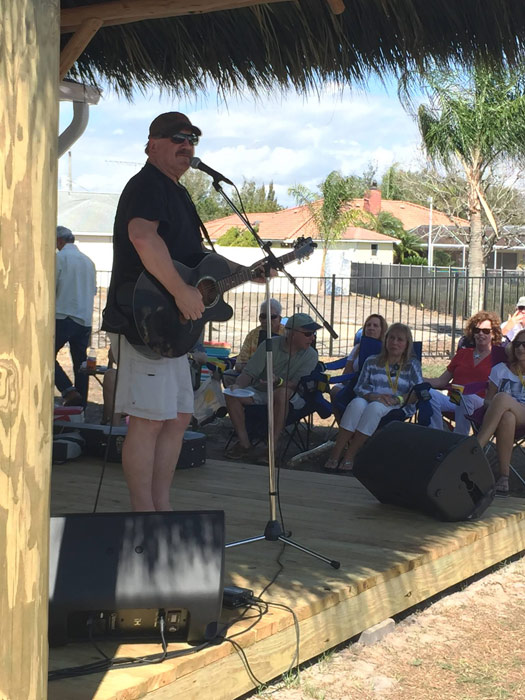 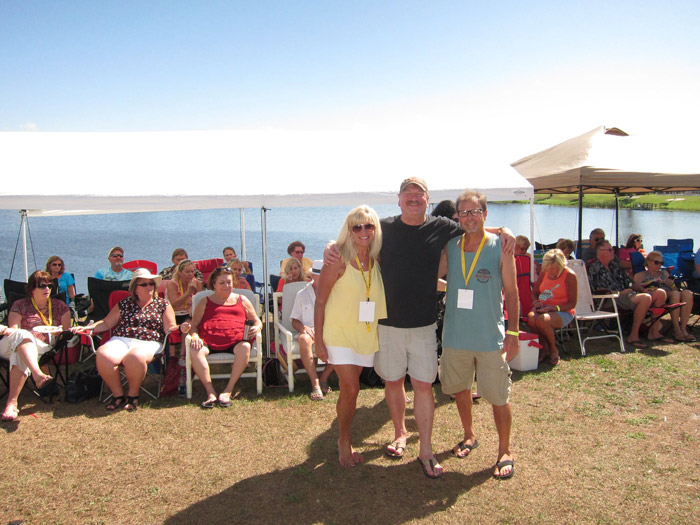 Geri and Mike opened the invitation beyond their local Parrot Head Clubs (they are members of both the Sarasota and Port Charlotte clubs) and introduced the Parrot Head lifestyle along with Trop Rock music to their MeetUp group members. Their large network of friends showed up in force and the very first Sun and Fun Tiki house concert was attended by 93 people!

Adding to the fun for all their friends and creating an even richer sound from the stage, Jim invited Mike to guest perform on the bass guitar for a few songs. 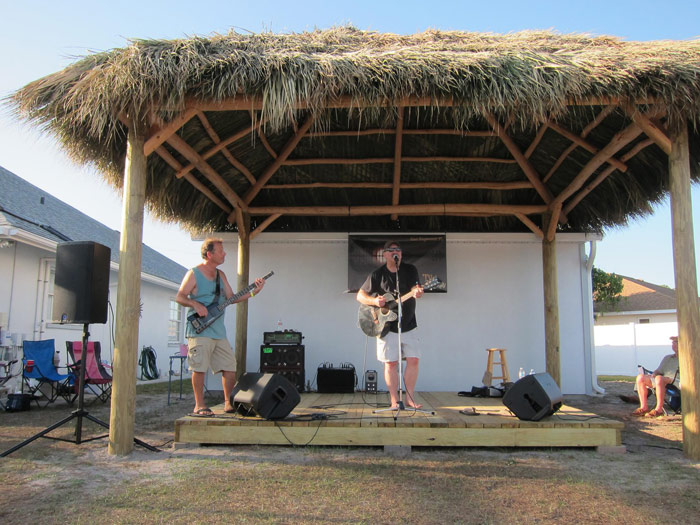 Coming Up Next for Sun and Fun Tiki

The Sun and Fun Tiki is booked for the rest of 2017 with house concerts scheduled every few months. Geri doesn’t want to overbook and feels that by limiting the number of concerts “each one will be more special.”

Plus, not all the events at their house are concerts. Geri and Mike also host outdoor movie nights on a large screen by the lake and other fun events through out the year.

Occasionally, Geri and Mike will spotlight artists outside of the Trop Rock genre, like their next house concert with Clara Oman, a singer/composer/pianist and entertainer who can play almost any style of music plus she’ll showcase a few of her own recordings.

Then it’s back to Trop Rock in June with Cory Young as he kicks off his new tour and new Trop Rock CD, in early fall you can see the famous Freebo perform an intimate show. Several more 2017 shows are scheduled and the Sun and Fun Tiki is currently booked through mid-April 2018 when they are hosting the talented Trop Rock singer/songwriter Don Middlebrook.

Like many Trop Rock house concert venues, the Sun and Fun Tiki kicks off each concert with a potluck and mingle. A great time to meet the artist, fill your belly and make new friends. To attend, the requested donation is $15 for solo artists and $20 for duos and all the money goes directly to the artist.