We all know by now, that Hurricane Harvey came slamming in to the Texas coast in the wee hours of Saturday morning, August 26. The eye decimated Rockport and Port Aransas was only slightly west of the eye. Port Aransas, or “Port A,” as locals and frequent visitors tend to refer the town, is a fishing village in which generations of spring breakers have spent time. Many of you have probably seen photos and videos of what this monster storm did to our special Texas coastal place and you know there is a great deal of devastation.

What about the Parrot Heads there? The local Parrot Head club has been around for about ten years and is called Parrot Heads of Port Aransas (PHOPA). They have a history of fundraisers that focus on the coastal Animal Rehabilitation Keep (ARK) and the local food pantry. Many of their members are retired transplants from other parts of Texas and they value charitable opportunities. 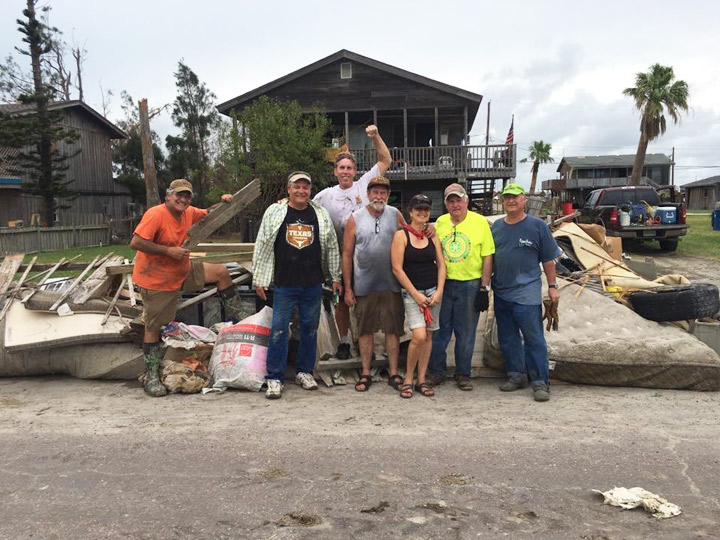 I spoke yesterday with Deno Fabrie, current PHOPA president. He told me, when I asked how his home fared, “I’m the luckiest man on the island. My home didn’t get any water, whereas the homes on either side of me had significant damage.” Another longtime member of PHOPA, D.D. Shields, actually stayed and she and her husband rode the storm out in their home. I saw her on a video someone posted on social media; some group was interviewing her. She smiled her famous smile, told the interviewer they had quite a bit of damage, but were fine. Not focusing on her loss, she said “Maybe you all can find someone else to help.” What a strong spirit!

Alan and Carolyn White are part-time residents of Port Aransas and they were on their way from their home in Oklahoma to their coastal home for a few weeks when the storm came in. Alan, who plays congas with The Bad Monkeys, said they had seen photos of their Port Aransas home before they arrived, but when they entered the house, they were nearly brought to their knees. There was a nine foot storm surge in town and they had 30 inches of water in the house. Their attitude is also good, though they are working hard to get the house habitable again. “By golly, we’ll get it back,” he told me. “What more do you want when you have the beach down the road?” 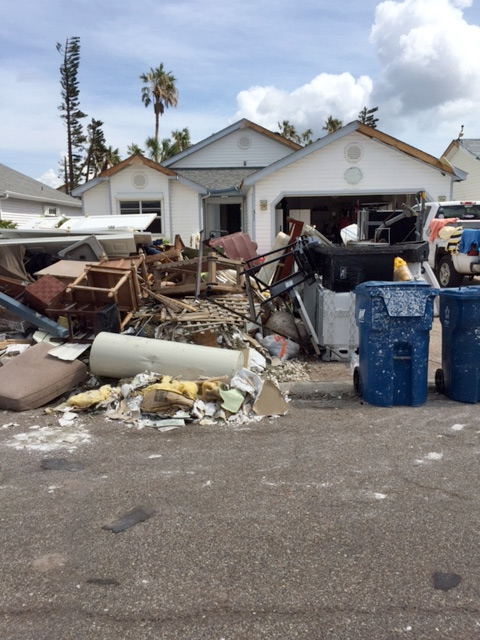 This is Alan and Carolyn White’s home with
their belongings ruined by flood waters.

Rockport, not that many miles away, had more damage and loss of life. I spoke with Joel Block, who is another Trop Rock musician and lives in Rockport. His home was not badly damaged, but he said there was an incredible amount of devastation. He has often played at Rusty’s Tropical Grill, owned by Rusty Pardue from the Houston Parrot Head Club and thy roof is gone from that structure. Rusty’s condo was severely damaged, as well.

My San Antonio Parrot Head friends Jim and Cassie Stanley told me that the home they hoped to retire in is “pretty much a total loss…muddy and depressing and four feet of debris waiting to dry out.” On a positive note, there were lots of volunteers helping and they said that was uplifting.

These are just a small sample of the stories of devastation along the Texas coast. Our Parrot Head friends and family in Galveston, Clear Lake, Houston and many more coastal areas are dealing with the same devastation and the victims of Hurricane Harvey will need assistance for months to come.

We know there are many fundraisers helping the Texas victims of Hurricane Harvey, but we’re especially proud to see Trop Rock artists step up to help Texans.

The great news for you is that you can donate to the hurricane recovery efforts and get some awesome items from these very generous Trop Rockers.

1. Don Middlebrook: Trop Rocker Don Middlebrook wants to help Houston, TX and his Texas family. For anyone who orders a “Songs from Talespin Bay” CD — 100% of the purchase price ($10.00) will be donated to the American Red Cross for relief efforts.

If you don’t have this CD, you’re going to love it when you get your copy! We loved it so much, we wrote this review about it. And if you already have it, then grab one for a friend. As Don says “Let’s share some music and help Texas!” Donate by purchasing your CD here: Don Middelbrook Albums 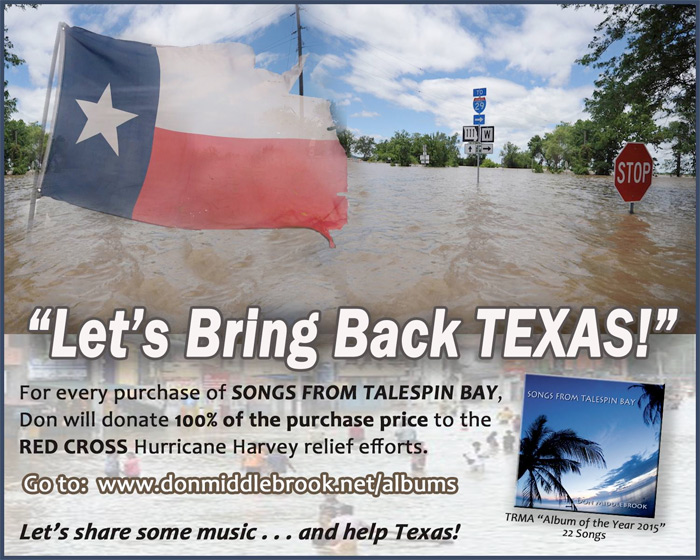 2. Donald James: Trop Rock artist from Austin, Texas just released his new single “Dance Live Love Lose Control,” a song about gratitude, positivity, quality dreaming and living. All proceeds from the online sales will be donated to several of the Parrot Head Clubs on the Gulf Coast of Texas to help members who have suffered from Hurricane Harvey damages.

Donald and his wife, Heather, “are doing what we can to help out” and says they want to spread “positive music and party with a purpose love.” Donate by downloading his new song here on CD Baby 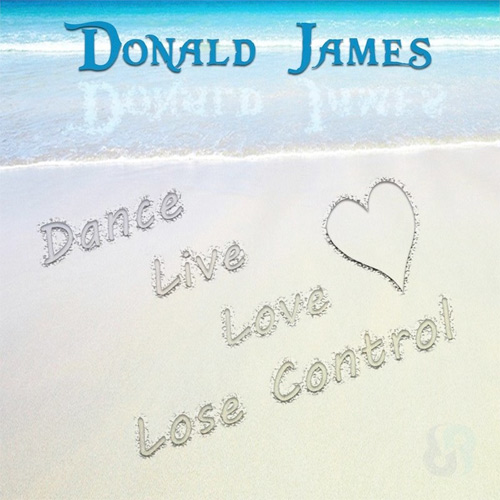 3. Mark Mulligan: Mark wrote an incredibly inspiring book titled “The Three Miracles” and we highly recommended his book in our spotlight article on Mark and the amazing efforts he does for charity. Mark describes his book as “The Three Miracles is a true story that begins with tragedy in the Mulligan family, then takes you on a personal journey that will make you laugh, make you cry, recharge your faith and leave you full of hope.”

Now, for an entire month starting on August 30th, 100% of every sale of his book will go to charitable relief efforts for Texas/Louisiana. Order it on Amazon, also available on Kindle or on his website here: Mark Mulligan 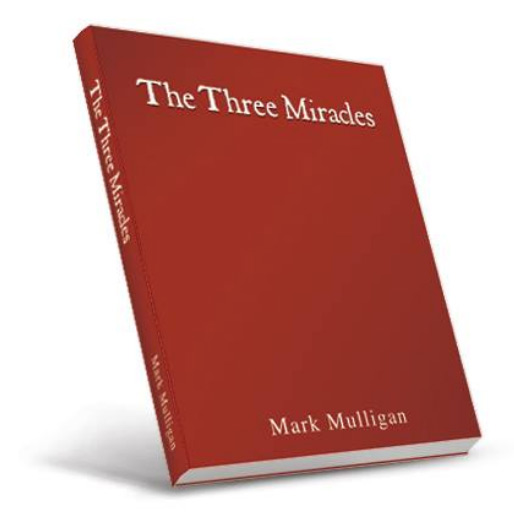