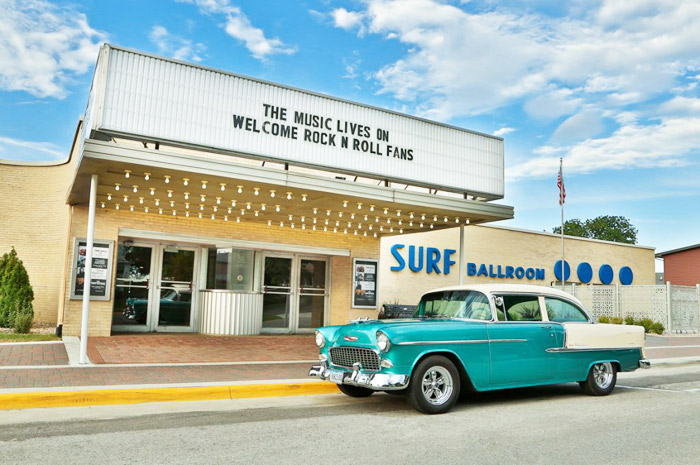 As a lover of all things tropical, you probably find that Iowa doesn’t appear on your list of places to visit very often if at all! Iowa – you say? Why would a beach loving, sun kissed, Trop Rock connoisseur like me ever be crazy enough to make a trip to the tall corn state? I mean tall palm trees definitely – but corn, seriously?

Now just hold on a minute, I think I might be able to interrupt that train of thought! For one glorious holiday weekend this year, Iowa (and specifically Clear Lake, Iowa) will become the center of the Trop Rock music universe when the biggest stars of the genre take the stage at the historic Surf Ballroom at Island Fever Showcase.

What’s the Surf Ballroom you ask? Read on my friends because you’re about to discover why Iowa (and tall corn) should definitely be in your travel plans this year! 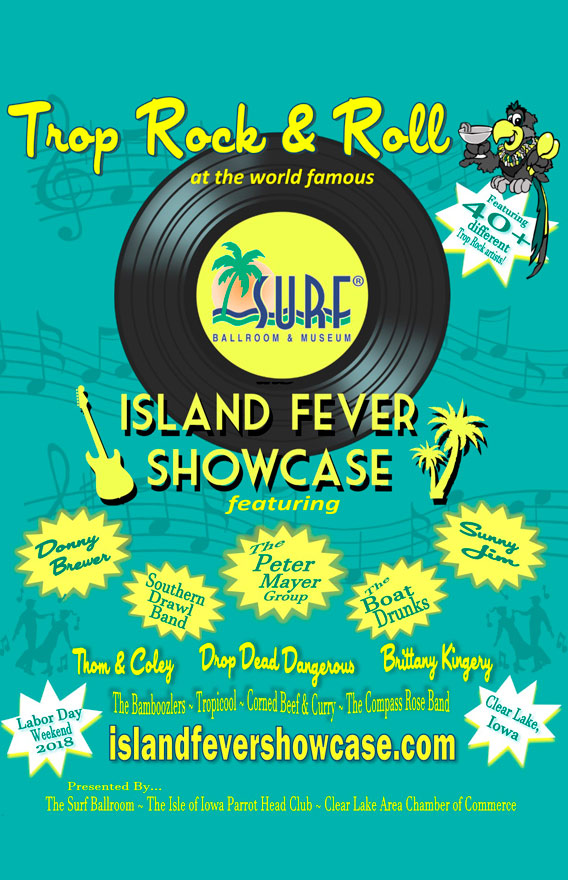 The Surf Ballroom is one of America’s most storied music venues. While it’s true that it sits 1,313 miles from any ocean’s surf, there won’t be a more significant location for Trop Rock music lovers to spend Labor Day weekend this year. Perhaps some lyrics may help you understand…

You got it! The Surf Ballroom is the very place that is immortalized by the song American Pie. It was in this very venue that Buddy Holly, Ritchie Valens & ‘The Big Bopper’ performed for the very last time. Recognized by the Rock & Roll Hall of Fame as a rock & roll landmark, the Surf is widely recognized as “the bedrock of where the sound and attitude of rock & roll changed forever.” 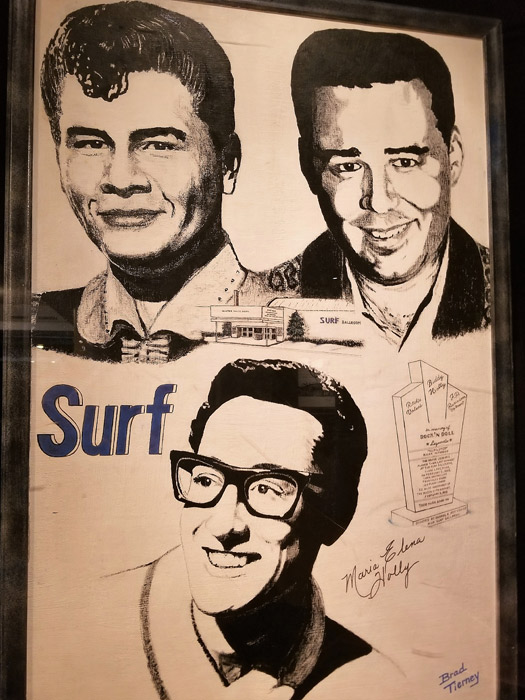 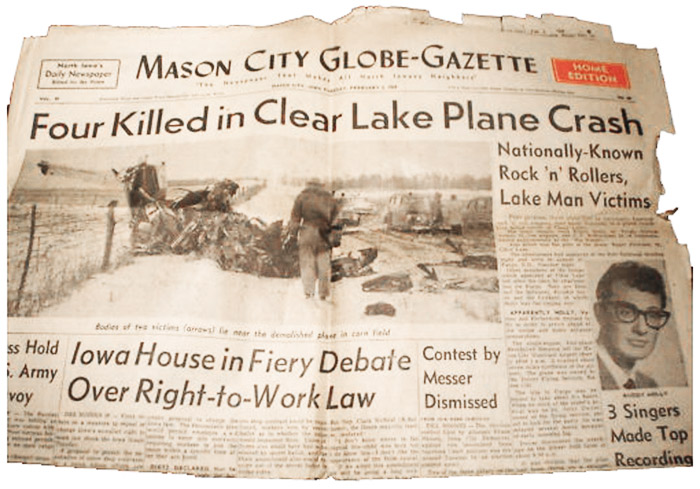 The original Surf Ballroom was constructed on the shore of Clear Lake & opened for business in April of 1934. Complete with a roof garden & a swanky boardwalk it was THE venue to play for the musicians of the time. Count Basie, Duke Ellington, The Dorsey’s, Glenn Miller – you weren’t anybody until you played the Surf.

Tragically, fire destroyed the original building in 1947 but it was quickly reconstructed right across the street reopening just 14 months later. And, the legend of the Surf only grew bigger! It was one of the first ballrooms in the country to feature rock & roll; an absolute “must play” venue on the performance circuit for all of the big name rock acts! February 2, 1959 (often referred to as the day the music died) only made this legendary venue bigger!

It’s as if the original owners built a venue for Trop Rock way before Trop Rock was ever a thing!

The Surf’s name and the elements of it’s motif all came from their vision to create an ocean beach club right in the middle of America. Much of the décor remains exactly the same today as it was nearly 70 years ago. Hand painted murals featuring palm trees, sailboats & the splashes of the ocean surf adorn the back walls. Pineapple stencils line the entry walls & the stage is surrounded by swaying palm trees.

The ballroom ceiling itself resembles the night sky over the ocean and the original cloud machine is still in use today. 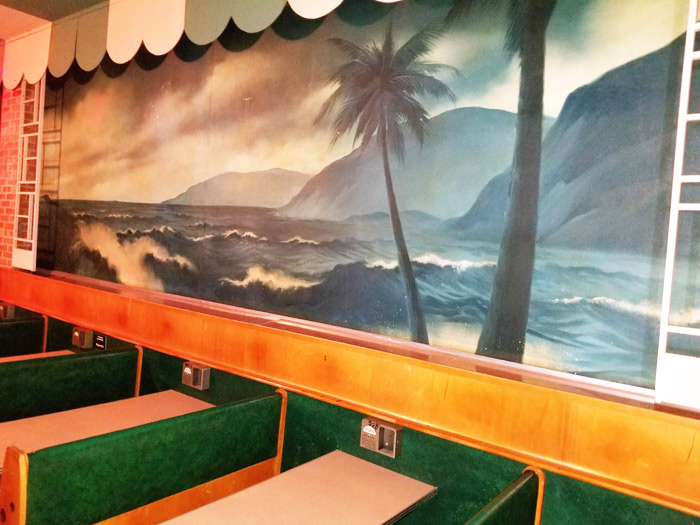 As you walk through the towering wooden doors and step onto the massive Maple hardwood dance floor you know that you have entered a special place – a musical mecca. Suddenly, you realize that these walls don’t just talk…these walls sing. Adorned with memorabilia from America’s most storied musical performers, they sing the song of America’s musical journey.

And at Island Fever Showcase, they will sing the song in the key of Trop Rock! 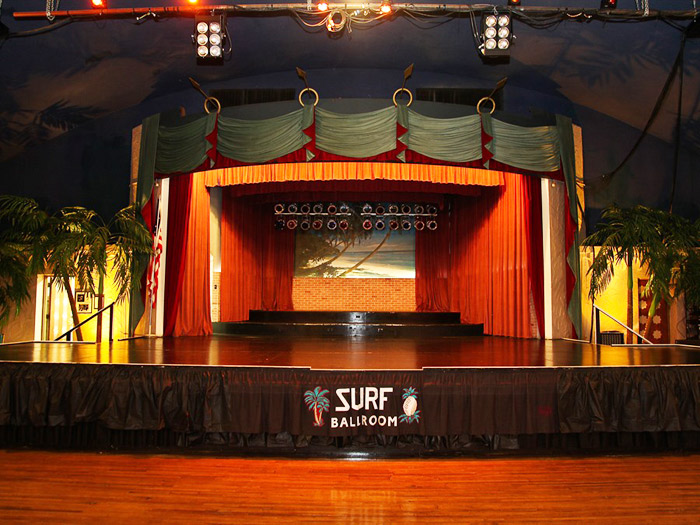 Back on that fateful day in 1959, it was the teenagers who made the pilgrimage to this quaint lake town in the middle of North Iowa on a snowy February night for the epic tour of the time – the Winter Dance Party! And it was this event that changed the course of rock & roll history for the ages.

Every year tens of thousands of music junkies make the trek to the Surf. Right along side Mel & Mavis from Wisconsin Rapids, you just might see Jackson Browne (whose tour bus just happened to make an unscheduled stop there a while back) or any one of the thousands of musical legends who have either performed on this sacred stage or just “stopped by” while “on tour across America to pay homage to the birthplace of modern day rock & roll! 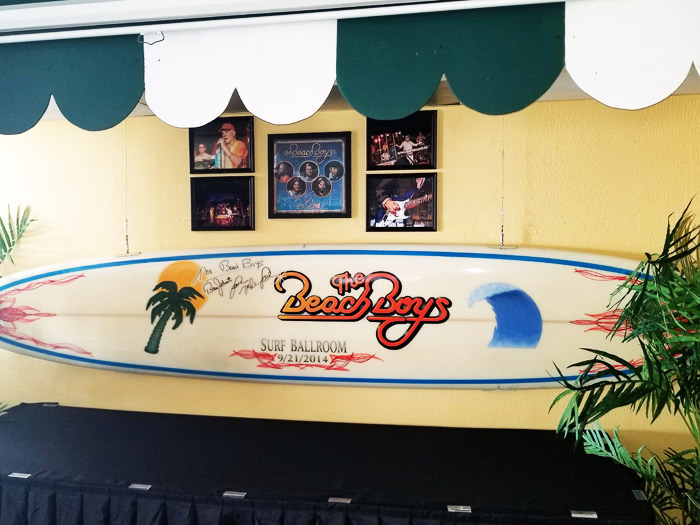 On Labor Day weekend it will be the parrot heads and the trop rock music lovers who will make the next great pilgrimage to the Surf Ballroom for the Island Fever Showcase. They will come from all around because of the storied history of this venue to experience a moment in Trop Rock that’s never happened before. The moment when the greatest stars of the genre write the next chapter of Trop Rock’s evolution and step upon the most historic stage in American history.

Ask any of the performers and they will tell you that this date, this moment in time is the very moment that they have hoped for… that they have dreamed of…that they have encircled on their life calendar for a very, very, long time! Many, if not all, have made the very same pilgrimage to the Surf at some point on their journeys crisscrossing the American landscape, bringing Trop Rock to every corner of the country. They’ve stopped in to pay homage to the artists who have come before them; to every artist who has shined in the golden spotlight & made their mark on the storied stage as they produced the soundtrack of our lives.

At last, this will be their moment. The moment when they themselves will shine in the spotlight of America’s most storied music venue, sign their name to “the wall” in the famed green room & add their voice to the chorus of legends whose voices sing from these historic walls.