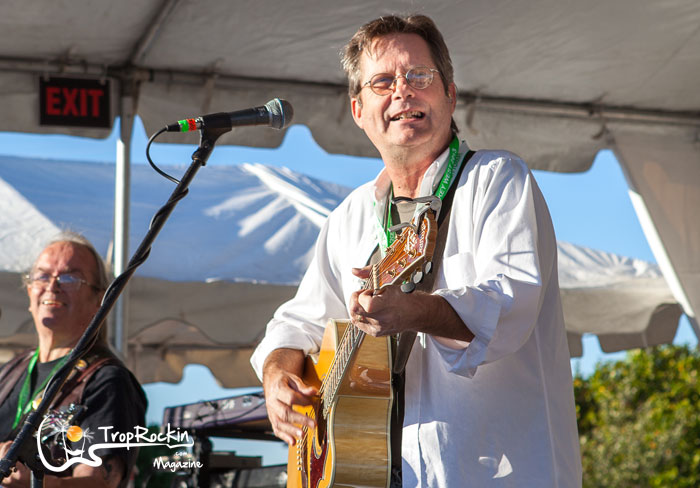 After a long five year dry spell with nothing new coming out of Jack (that he approved of) just flowing through a motion of performing years of work from his nine Trop Rock CDs. Jack hit a wave of turning points over the last year finding inspiration including memories of time with artists such as Hugo Duarte, a long time friend.

This new flood of songs and dedication has Jack sailing high seas with a 2014 release of “Trinidad” and a 2015 recording session taking place right now to release his new album Livin’ the Salt Life.

“There is a moment where you have to write about your dog” Jack said of the title song “Livin’ the Salt Life.” A song about water, drinking, fishing and a dog all come together in this story of him and his dog living in a drinking town with a fishing problem.

When you listen to Jack tell stories about how quickly a song can come together and look good on paper, you’d think it was easy, but Jack explains a song can lack a certain something from paper to guitar. Jack said he wrote about twenty plus songs not feeling they were trash but just not what he was looking for.

There are songs you can just hear a phrase such as “It takes all day to get nothing done” said by a friend of Jack’s living in Key West. Jack had a devilish grin on his face as he continued his story of how he was going to turn those words into a song. “It takes all day” which you can find on his “Puerto Los Somewhere” CD still making its way to the top of song list requests. Currently on the “Trinidad” album you can listen to a track titled “10lb Mouth” another phrase Jack could not walk away from and you really should see Jack performing live for the story behind that song.

A moment of memories is what Jack will also be bringing to his soon to be released album.

Jack has already released a tribute video of the “Mighty Oak” written by Hugo Duarte and performed by Jack Mosley. Some of you might remember the acoustic version video Jack sent for Hugo’s memorial service.

Jack Mosley, Hugo Duarte and Kelly McGuire were performing at a house concert when Hugo noticed a huge oak tree being removed from a neighbors property. The sound of the jack hammer crushing the cement had hit Hugo in such a way that it inspired him to hide upstairs and write “Mighty Oak” at that very moment. Hugo went on to sing the song that very same evening imprinting the words on Jack Mosley.

Jack proudly said after hearing the song and seeing the oak removal for himself, it was a song he had lived and experienced with Hugo. Jack feels very close and part of this song knowing that he was there for the writing and first performance of “Mighty Oak.” The tribute video and including this song on the new CD is Jack’s way of carrying Hugo with him and making sure his music lives on.

The pure emotion of love and respect for Hugo is felt as Jack pours out back stage stories and affirming the “Mighty Oak” with its roots of existence. Take a few moments and watch the video, it’s a moving experience (click the picture below):

Jack Mosley is a Story Teller First, A Writer Second

Jack is back bringing us starving Trop Rock lovers a personal insight to his dog relationship and a friend tribute to share on his up coming album. Recording is the fun part Jack explains “having Sunny Jim and John Patti joining him in the studio to bring this CD to a full circle.” I asked Jack for some more information about the direction for this CD and I received the ever loving Jack Mosley answer “I will know when I am finished, but it will include lighthearted songs with some laughter.”

As best as I can gather between the stories and songs this soon to be released CD will not disappoint his current and future fans. Florida Native Jack Mosley is back with a mature side showing us a glimpse of his heart and always sharing his passion for music.

Jack Mosley is one of the best story tellers I know. Jack and I laughed as he explained how “Story Tellers” just don’t seem to make a living. “I have learned to put it all in a crock pot in my head and let brew” said Jack as he explained to me how song writing has become his story telling outlet.

Jack Mosley CDs have their own story continuing on to the next CD. If you do not have his collection you are too late to own CD versions of “Nature of an Island” and “Island Time” they will be downloads only on CDBaby or iTunes (coming soon). “Small Boats on Big Oceans” will be the next CD that can only be found on those sites too. Hidden tracks are what CD collectors get so excited about owning the printed CDs.

So get your CD collection started now at Jack Mosley’s website and look for his newest CD in late Summer or early Fall of 2015.