Jerry Diaz is a multiple award winning Trop Rock singer / songwriter from the Texas Gulf Coast. Jerry and his band, Hanna’s Reef, entertain all over the country showcasing Jerry’s original songs along with a few well picked covers. Jerry is known for his wildly successful event, Pardi Gras, held each year in New Orleans in the French Quarter. In 2004, Jerry wrote the song “Rum in Pensacola” and here he tells us his story behind his song: 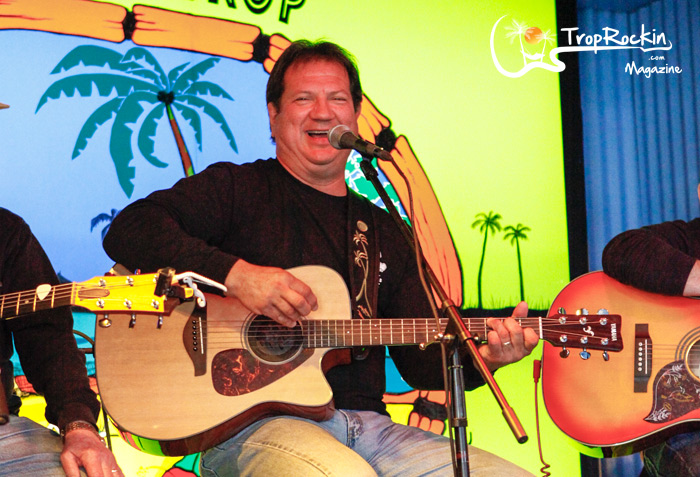 For several years, I had wanted to write a romantic song, that somehow involved the beach, a long lost love, and coming home. It was just an idea for a couple of years, but one day, I happened on a song title by chance. The song itself more or less just flowed out of that song title from there.

This is how the song title came to me: the band and I were on a particularly hard road trip one weekend back in 2002 or so, and we were all traveling together. This particular trip involved us flying, renting cars, and criss-crossing the southern part of the United States with very little sleep. The last gig of our weekend was on a Saturday evening in Pensacola, and we were all riding in a 15 passenger van that afternoon, heading to a venue to set up for that evening’s show.

I recall that it was an early-ish gig, over by 10pm. We were all exhausted, but sensing that we were close to the end of this grueling weekend, we were focused on a little bit of relaxation after the show that evening. As we were crossing over the Escambia Bay bridge on Interstate 10, I noted to myself how beautiful the view was. Then, out of nowhere, I just blurted out, I can’t wait for this show to be over, and we’re all “drinking rum in Pensacola.” That title stuck in my head, and eventually shortened to “Rum in Pensacola.” It was the missing piece to the idea for a romantic beach song that I already had.

By the way, I’ve heard it said that just about every song ever written was influenced directly or indirectly by another song preceding it. I believe that is absolutely true. I know that is the case here, because one of my favorite songs growing up was a song called “Beach Baby,” by a group called First Class. That certainly had a subliminal influence on the story in my song, “Rum in Pensacola.”
–Jerry

Listen to a snippet of Jerry Diaz’s “Rum in Pensacola” song and if it’s not in your Trop Rock music rotation, you’re going to want to get it! Here is the recording from the “Deja View” album: