Jimi Pappas is an eclectic Artist/Musician bringing a vast variety of style to his music. Performing for Disney for over 10 yrs, Drummer (nick named Pappapotamus) for Jim Morris and The Big Bamboo Band, guitar and vocals for Tom Becker’s John Denver Tribute show, his own creation “Beatlebeats”, front man of the duo “The JP’s” (Jimi Pappas & John Patti) and many other performances to total just over 30 years of experience.

Jimi Pappas has preformed Beatles to Buffett enhancing and sculpting his own style of music. Jimi created 8 personally infused CDs showcasing his own lyrics and instrumental talent. He brought us the fun upbeat song “Watermelons” back in 2011. The Story Behind the Song is the perfect “sign” of true talent and he describes this song as “A healthy summer song….So cool and refreshing on a hot summer night.” Here is Jimi’s story: 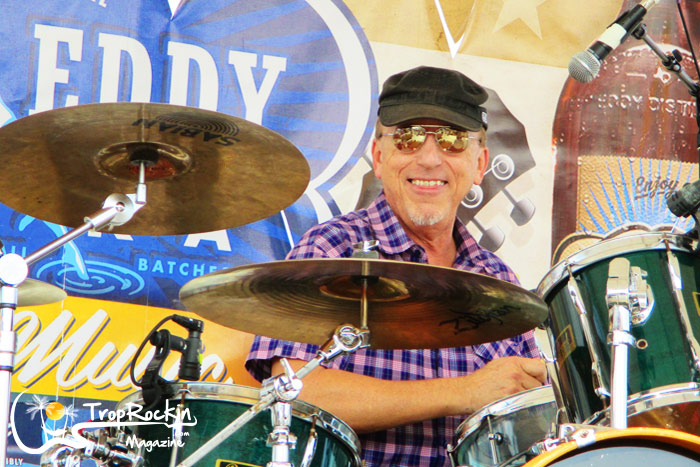 The original idea was going to be a song and possibly a whole CD called “Two for One.” All the signs say two for one, like at any bar happy hour, Or… thinking how two hearts, two souls, two people together, for each other as one. This vibe started to take a musical shape, as a probable chorus, “All the signs say two for one,” and I thought, I have to go with this platform and heck, base a concept for an entire collection around it.

Then nothing happened for quite some time…

Hailing from Orlando for the last 21 years, my wife Shelley and I have had our historic Key West style cottage up in the lovely town of Mt. Dora, FL for many years. While traveling up and back on old Route 441 there would be many road side stands, old school Florida, you’ve seen the signs: boiled peanuts, sweet corn, peaches, and then – Watermelons. By the time I got home I had meshed the two ideas: Two for One and Watermelons. The song began to write itself instantly and by the next day it had the basic frame work for what it would become.

It seems later that week I would find my self in a room in Orange County, CA with many awesome song writers, like James White, John Frinzi and Jim Morris. Handing a guitar around the room playing bits and pieces of songs, I played a bit of my new ditty. I recall Jim checking me on some of the lyrics, the amazing lyricist he was! He let me know that Watermelons don’t hang from a vine, I let him know that in the world of Pappapotomus they do!

The recording of this song was special, with friends like Charlie DeCosa bringing the bass and the fabulous Rob Ellis Peck coming to Deltona Records to add his perfectly in tune lap steel and harp! Meanwhile I just kept adding percussion and little things, the finishing touches were Mary sending her track down from Canada (Nuts on a stick) and then I finished it with the banjo line.

I remember it finally was done and in February while in Key West, I sent it to DJ Jeff. He started playing it and gave me a call, saying “What’s up with this song? Where can folks get it?” It was the only new song I had so I put it out as a single and it kind of caught on.

To be honest to the Trop Rockin’ world, most times I have no idea where these songs come from! But there’s a little of the story behind the song. Next time your driving down a country road or at a tiki bar, check out the signs! They are all around us! You can barely lift them up but you can never put em down :)
–Jimi Pappas

This post contains affiliate links at no extra cost to you or the artist! We may receive a small commission from Amazon or iTunes for helping market the song and the artist always receives their full payment.