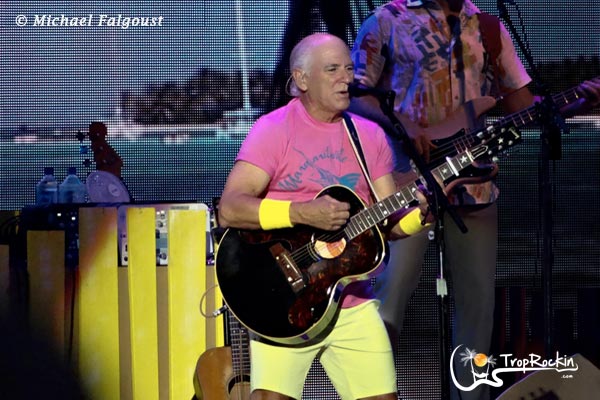 When landlocked Austin, Texas transforms into a tropical beach town you know Jimmy Buffett is in the capital of Texas.  On the 4th stop of the “This One’s For You” tour, Parrot Heads took over the Austin360 Amphitheater parking lot.  Parking spot beaches, hula girls and guys and more tiki bars offering up tasty shots than you could find along an island coastline. 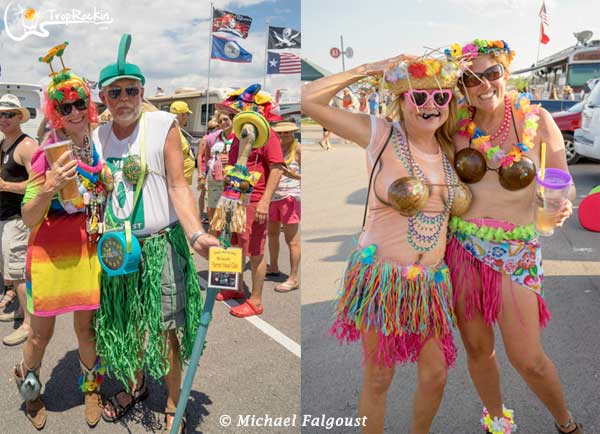 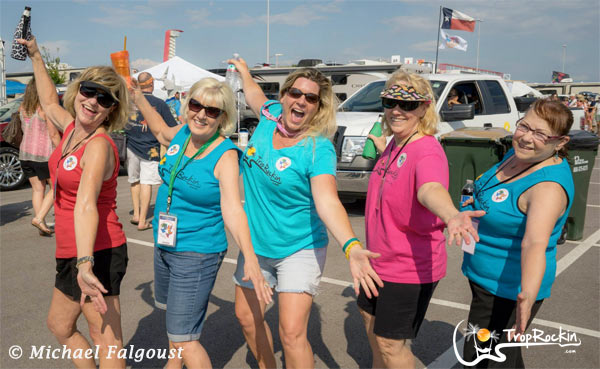 TropRockin’ Paradise Crew having some fun! 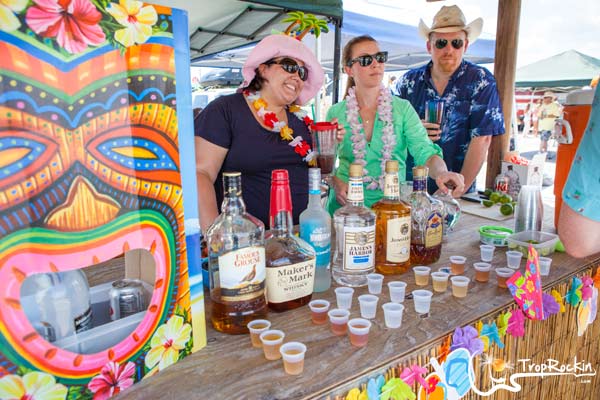 Parrot Heads have an inner need to help others, be it a charitable cause or to make sure a perfect stranger never goes thirsty at a tailgate.  The CTXPHC Moonshine Bar offered up eight different flavors of moonshine, jello shots and pudding shots.

Apple spice and Applie Pie Moonshine were my favorites, with Peanut Butter Chocolate closing in as a tailgate favorite this year.  The best treat?  RumChata Chocolate Pudding shots (here’s the recipe, because you are going to want to make these)! 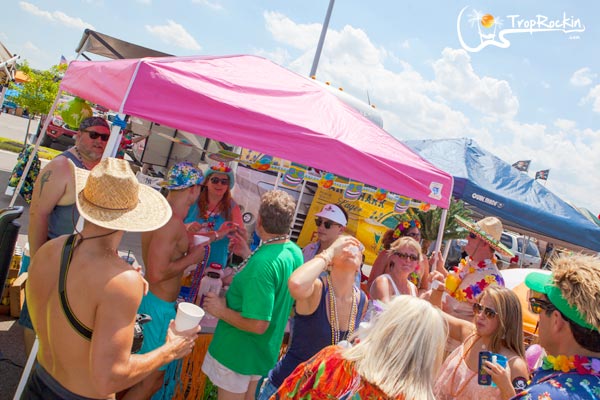 The crowd around the CTXPHC Moonshine Bar courtesy of Jeff Cohen and his fantastic moonshine skills!

Live music by Donny Brewer, a local Austin Trop Rock artist, kicked off the official party around 11am.  A mix of his original songs from his album “Live Like Jimmy Buffett” and favorite Buffett tunes kept us energized for the long day ahead.

Followed by Matt Hoggatt, famous for his song “Dear Jimmy Buffett” that eventually landed him a record deal on Buffett’s label and the chance to play with Buffett on tour.  Matt brought along Double D, a husband and wife duo and the three of them kept the party jumping all afternoon. 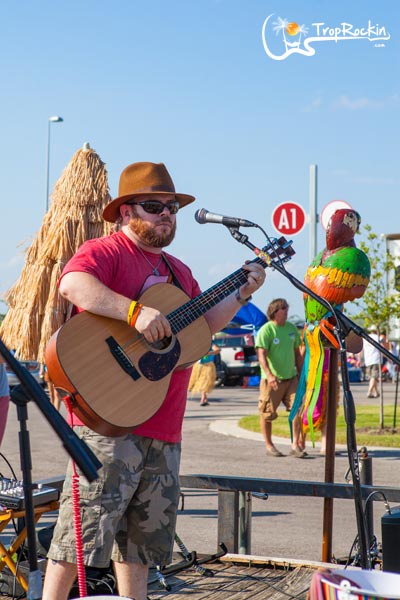 “Austin is a pirate town.  At least as long as I’ve been coming here” said Buffett just before launching into one of his regular concert songs, “A Pirate Looks at 40.”  I have to agree.  With a town whose motto is “Keep Austin Weird”, pirates and Parrot Heads are par for the course in this eclectic community.

Jimmy Buffett and the Coral Reefer band hit the stage on a high note with “Summertime Blues”, a song that’s been covered by many artists, but most likely to be attributed to Alan Jackson who took this 1958 Eddie Cochran song to #1 in 1994.  It may not officially be summer, but it was 91 degrees during the tailgate, so we certainly had our own kind of summertime blues.  Jimmy referenced last year’s weather debacle several times through out the night.  At last year’s concert,  a late hitting cold front settled over Austin, causing coats and scarfs to resurface along with 50 mph winds.  The call came in around 2pm, the Buffett concert would be delayed a day.  Although we powered through it and tailgated both days, the heat was welcoming this year. Buffett marveled that he was actually playing on the scheduled date, which we all cheered to show our delight. 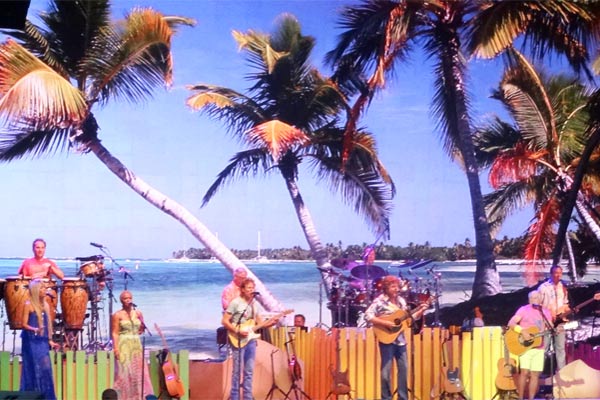 Jimmy Buffett and the Coral Reefer Band. The stage backgrounds changed with each song taking us on a tour of the world!

The “Songs You Know By Heart” were the meat of the concert, like every year.  I’m encroaching on almost 60 Buffett concerts since 1990 and for a moment I thought to myself, why doesn’t he include a few more obscure or newer songs?  But I look around and I know why.  We sang along, we danced in the isles (despite the often warnings from venue staff).   We love the songs we know by heart, we embrace them with enthusiasm no matter how many times we’ve heard them.  “Cheeseburger in Paradise,” “Come Monday,” Changes in Lattitudes, Changes in Attitudes” and of course “Margaritaville”, which Buffett reminded us he began writing this iconic song right here in Austin.

One thing I love about a Buffett concert, people don’t expect anyone to stay seated.  Parrot Heads have too much energy and we want to play together through out the concert.  It’s what makes it a Jimmy Buffett concert, not some other concert and it’s part of what makes Parrot Heads unique.  We want to enjoy Jimmy Buffett, but what really pulls us each year to the concert is the fun we have with each other.  No one is a stranger and we dance the whole night.  Seats are just a marker, a place to set down your drink when you wrap your arms around friends to sway to “One Particular Harbor.” 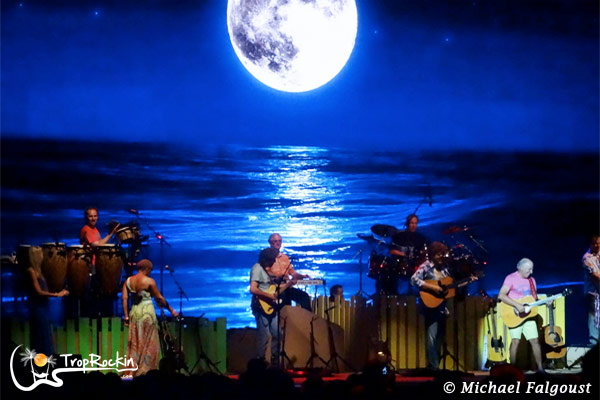 Missing from this years set list is a spotlight on Nadirah Shakoor.  Her incredible voice comes through in small spots, but she doesn’t headline a song.  Added this year, more Mac McAnally.  Who doesn’t love Mac?

During the 2013 CMA Awards, Mac won his 5th consecutive award for “Musician of the Year” and he gave us a taste of why he keeps winning.

Mac recounted his struggles as a young musician who headed to Austin to play on the streets.  He setup on Congress Avenue in Austin, Texas and didn’t even have a wallet.  “I just hoped the people of Austin would be good to me” Mac shared with us.  He made enough money on the street to buy a new pair of shoes and then finally made enough money to eat at Matt’s El Rancho, an iconic restaurant in Austin.  Along the way he kept trying to understand why he couldn’t play “Little Martha.”  Mac revealed, “Finally, someone told me it was played with two guitars.”  Right then Mac launched into “Little Martha”, spotlighted alone in the center of the stage, a man and his guitar and he played all the chords on one guitar.  As the guy behind me in the crowd said…. “Damn good pickin’!” 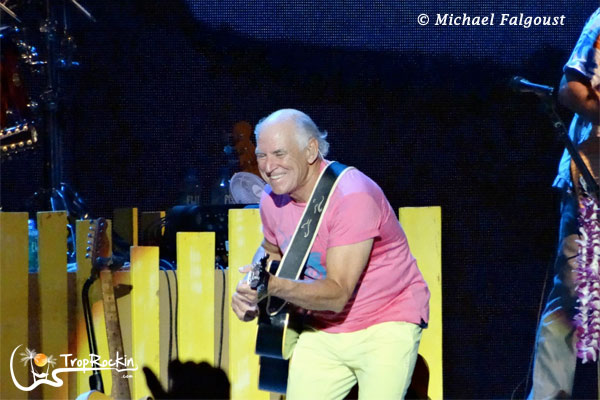 The only older Buffett song, not part of the songs we all know by heart was “My Head Hurts, My Feet Stink And I Don’t Love Jesus.”  For something new, Jimmy covered two Zach Brown songs.  Buffett said “Here’s one I did with Zach on Crossroads.  It’s one we haven’t done yet.  So why not?  This one’s for you” and launched into “Free” mixed with “Into the Mystic.”  Mac lead the first verse, Peter Mayer second and Buffett third.  A nice change up showcasing both Mac and Peter’s strong lead vocals.

Although it’s been done before, I still love it when the final song of the night is “Lovely Cruise.”  It takes me back to the mid-90’s when I first heard Buffett close out a concert with this perfect goodbye song. “So drink it up.  This one’s for you.  It’s been a lovely cruise.”

If you enjoy our articles, please sign up for our monthly newsletter and share this story with your friends!

Thanks Cindy! Would have loved to seen you! Have fun in Frisco..... like that's going to be hard! LOL

Terrific article & photos! Wish we could have been nearby to attend - but there's always Frisco!