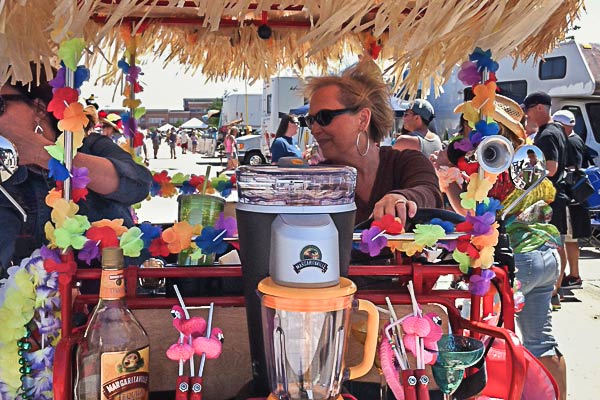 Fun in Frisco?  You Bet!

I remember several years ago when the annual spring arrival of Jimmy Buffett’s Dallas concert was moved to a tiny place north of Plano called Frisco. We traveled out to the country on the Dallas North Tollway, it seemed, and planned to spend a few hours in a remote parking lot of a soccer stadium before getting our yearly dose of an evening in “Margaritaville.”  Who would have guessed that a venue in the middle of cow pastures would turn out to be one of the top tailgate destinations in the country?

Tailgating is legendary at Frisco. For a few years now, the line of RVs and travel trailers has stretched a couple of miles when they open the parking gates on Friday.  The infamous “Red Lot” is always quickly filled with these overnight vehicles and the decorating and fun begins!  I am partial, though, to the Gold Lot, which is open only to Parrot Head Club vehicles. I gladly pay the extra money to be in the center of the Parrot Head action and look forward to seeing friends from the Southern Region of PHIP (Parrot Heads in Paradise).

The mastermind of the Frisco Gold Lot is Lone Star member Terry Thompson. He has taken on the challenge of a day full of details for several years now and does a terrific job of coordinating with the venue, organizing the valuable parking spots and overseeing entertainment and fund-raising events. 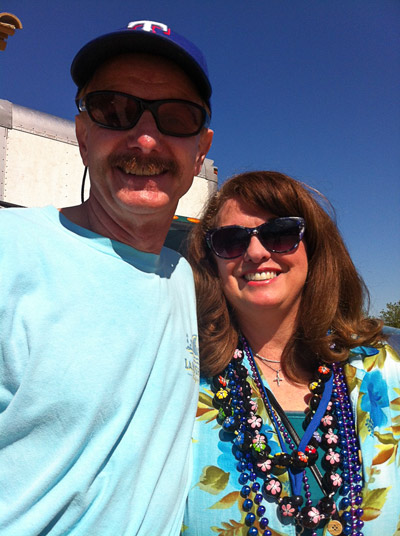 One of the aspects of the Frisco “Sharking Lot Party” is all the imagination and creativity that abounds. I used to be one to zip around (riding, not driving) in a tropically decorated golf cart. Well, no more, as any kind of motorized vehicle, such as golf carts and four-wheelers, were banned this year. What did the Parrot Heads do? They relied on pedal power! One very creative fellow had built a pirate ship around a pedal cart and spent his time making new friends all day in the Gold Lot, while slowly pedaling his booty along!

I also witnessed old fashioned foot power with an amazing replica of Fred Flinstone’s car…..Load up some passengers and get the feet “walking” and the car moved. Not fast, but it moved! 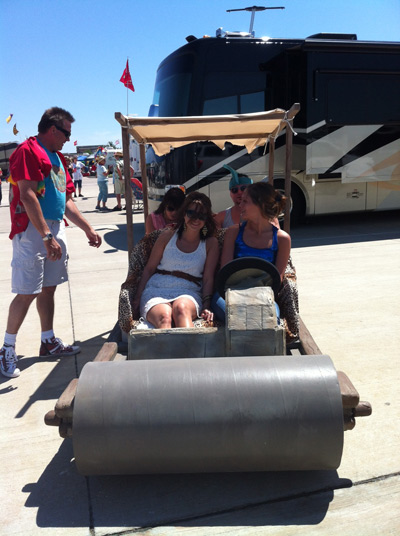 There was also lots of live music in the Gold Lot. Cedar Creek Parrot Head Club brought a fabulous pirate ship stage and featured some super local talent, including Don Burke and Kelly Brown. Out of earshot of the pirate ship was the COPA Reefers, from the Central Oklahoma Parrot Head Club. They entertained all afternoon, with a mix of country, Trop Rock and Buffet (of course!) music. As for as raising money for charity, the  Lone Star Parrot Head Club is always on the ball with cheeseburgers and potty passes to their nice (and clean!) potty truck. Proceeds usually go to the local USO. 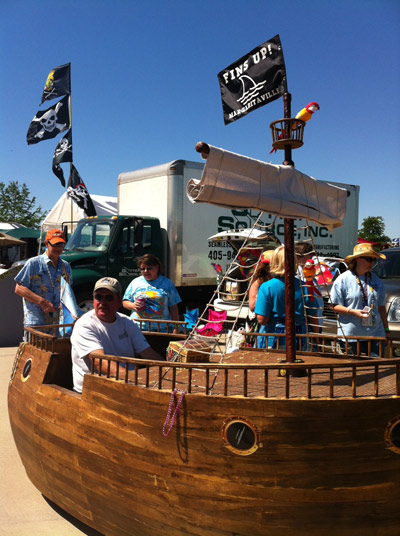 And what about costuming for the parking lot event? I’ll admit that this was the first year that I didn’t wear my concert hat – for one thing, it’s fairly heavy and gives me super “hat hair,” so if I put it on, I must commit to the hat until the end of the concert. But, I witnessed several great tailgating outfits. One of the first great groups was a family…..  an older brother in a shark costume, plus little brother and sister in pirate and hula girl garb. Those parents are raising their kids right!

I also delighted in seeing a trio of West Highland Terriers with shark fin-adorned sweaters. 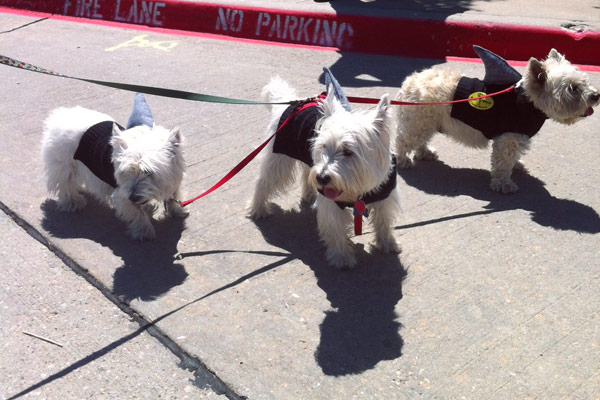 And, of course, veteran Parrot Heads, such as Cooler Dave Spenny of San Antonio, always dress in appropriate and fun costuming.  Along with Woody, of course! 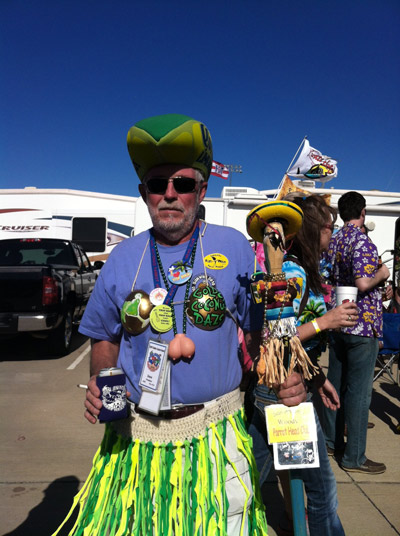 In my opinion, a day at the Buffet parking lot party in Frisco is exhausting, but a truly unique experience. I’ll take my vitamins and get ready for next year!