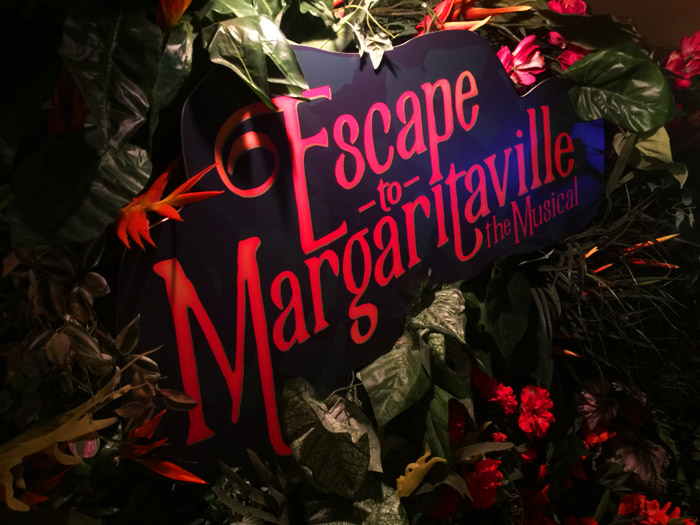 When the new Jimmy Buffett musical Escape to Margaritaville was announced, I knew my next adventure would take me out west to La Jolla, California. I wouldn’t delay. No way. Not this time.

I can still feel the sting of regret from missing the 1997 short run musical Don’t Stop The Carnival, a collaboration between Jimmy Buffett and Herman Wouk (based on Wouk’s book by the same title). This time around, I knew I had a small window between planned vacations so I purchased two tickets guaranteeing me an escape to somewhere warm inside the La Jolla Playhouse.

With my itinerary set, I headed to La Jolla via the Austin to Los Angeles route (yes, that’s a little out of the way) to meet up with my Parrot Head pal Carol Ewald, who thankfully was willing to spend a week showing me the sights of southern California plus attend an Escape to Margaritaville preview show. 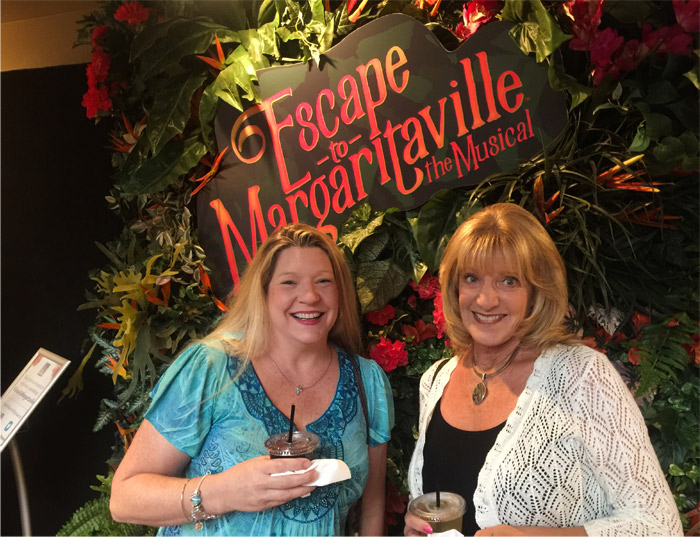 Arriving in La Jolla, our first stop was lunch accompanied by a grand ocean view at Duke’s restaurant and a few well-deserved Mai Tai’s before Uber delivered us to the theater turned island paradise.

As we approached the playhouse, wooden directional signposts dotted the walkway, crab pot buoys were hung overhead like garland and a tropically lush photo op backdrop was propped up in the small lobby. The hand-made style decor looked a bit amateur, possibly a last minute rush job? Simple as it may be, it helped set the laid-back vibe. 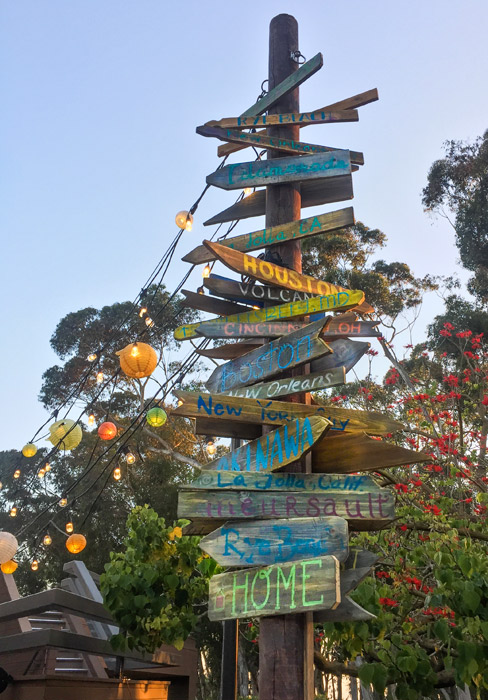 From the start this musical is an all-out island party. Set on a fictional island at a slightly run-down resort where everyone in the bar has a “License to Chill,” which happens to be the first song and our first good look at the talent in this musical. The choreography, the singing and the excitement practically jumps from the stage.

We quickly meet the island cast of characters. Tully, whose name surely derives from the character in Jimmy Buffett’s short story fiction book Tales from Margaritaville is the main character. As the local singer/entertainer for the resort bar, his uniform consists of a Hawaiian shirt and shorts, bare feet (just like when Jimmy Buffett performs) and a carefree almost reckless attitude.

A confirmed bachelor, he can turn on the schoolboy charm captivating the latest pretty woman arriving on vacation each week, but clearly, he’s quite happy when they leave. That is until Rachel arrives on the island for a friend’s bachelorette vacation. Rachel is the serious scientist who has no interest in Tully, which of course is the beginning of the romantic comedy plot.

Escape to Margaritaville is more than a one dimensional story with a subplot seamlessly intertwined and just as engaging as the main story. The subplot follows Tammy (the bachelorette) in a love-triangle with her controlling fiance and the innocently goofy island bartender who (of course) is Tully’s best friend.

That’s all I’ll divulge about the plot to keep from spoiling your experience. I will say there are several outlandish adventures and yes, there’s a volcano. A few of the songs are obvious choices to compliment the story. “Fins,” “Volcano” and “Love and Luck” come in just where you expect, but the surprises are how the story encompasses the songs “Cheeseburger in Paradise,” “He Went To Paris” and “My Head Hurts, My Feet Stink and I Don’t Love Jesus.” You’ll have a new appreciation for the “songs you know by heart” as they take on new meanings, giving them a refresh.

Here is the official trailer video spotlighting the sets, costumes and choreography:

The writers (Greg Garcia and Mike O’Mally) brilliantly weave Jimmy Buffett song lines into the dialog keeping you on your toes trying to catch all the references. Several times Carol and I were laughing so hard we missed the follow up insider jokes. And to top it off, there’s another dimension to the musical…. audience participation!

It really has it all. Fun, witty, beach vacation, a tropical paradise, incredible choreography, the music we love and a love story full of one-liners Parrot Heads will truly appreciate.

And, as it turns out I didn’t need to be in such a hurry to see the musical. Escape to Margaritaville is a hit with two more cities on the tour (New Orleans and Chicago) and then it’s off to the big lights of Broadway.

I recommend seeing it twice.