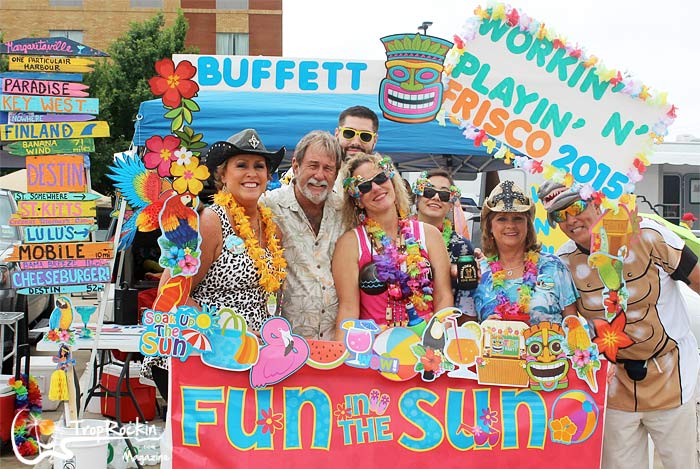 Today my body is weary, my eyes are a little bleary and I awoke a bit hoarse. But all those minor maladies are worth it because I had a terrific time yesterday in Frisco, Texas at the Jimmy Buffett concert and preceding Sharking Lot party.

The annual Sharking Lot is held in one of the main parking lots surrounding the Toyota Stadium and is the endeavor of the hard-working Lone Star Parrot Head Club. Terry Thompson is the mastermind of the layout and told me that this year ten Parrot Head Clubs were represented from Lone Star (Dallas/ Fort Worth) to a club from Denver, Colorado. The storm-torn Dallas area received a reprieve from rain all day and by the time Buffett started the concert, the skies were clear.

This was my eighth or ninth Jimmy Buffett concert to attend in Frisco and every year, I see three truths about Parrot Heads come to life:

I started my first jaunt around the area, margarita in hand, and I came upon a cute family – dad was Elvis, one of the kids was a lobster and the rest of the family just smiled and went with the flow. Soon I saw a Carmen Miranda lookalike, pirates and a group sporting Margaritaville baseballs shirts. 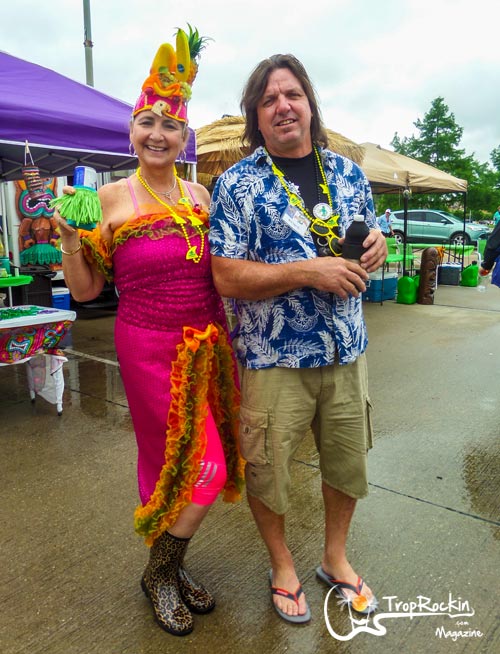 The school bus from Margaritaville ISD was there – why couldn’t I have attended school there? Even The World’s Most Interesting Man was around, sporting some tropical toys. And of course, there were various dogs in attendance, from flower festooned yappers to old dogs who watched the crazy humans with years of patience. The best new innovation I saw was a Yeti cakset filled with coolers and a small grill, all rimmed with colorful lights. If you have to go, go in style! 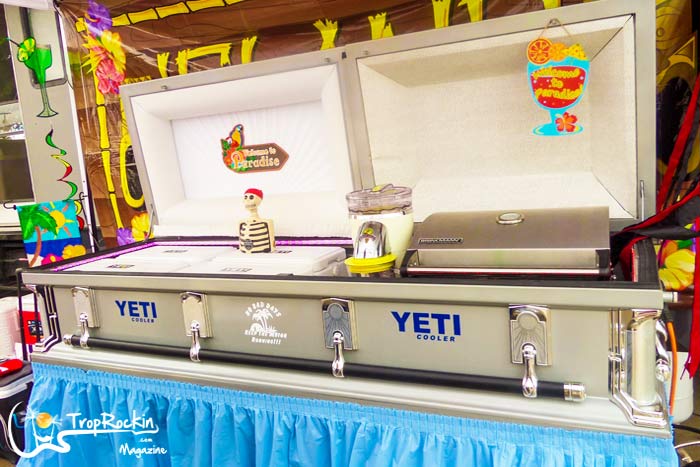 Lone Star Parrot Head Club does a great job of raising money for their designated charity, the USO. They sold barbeque sandwiches, all-day passes to a “port-a-potty truck,” Sharking Lot t-shirts, and chances at “Bra Pong.” Their most popular event has to be the “Shot Luge,” in which the participant can pick their choice of libation to slurp up from a fast trip down an ice slope. The Seguin Parrot Head Club gave out drinks on their shot ski for tips and collected over $400 for the Wimberly flood victims. Cedar Creek Parrot Head Club raised $2,200 with donations for their beer bar, which will go to benefit Tour de Cure and their Angels in Tropical Shirts charity 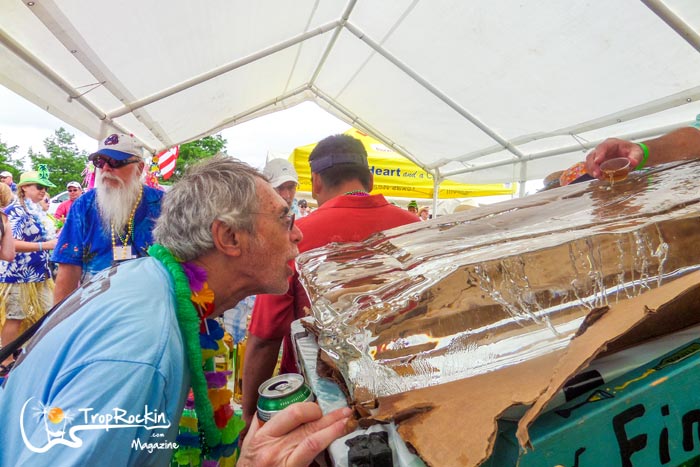 The Susan G. Komen Foundation always has a presence in Frisco and many of us forked over donation money for some beautifully decorated brassieres. Look for these wild bras at Meeting of the Minds this year!

Here is a worthy quote from musician Don Burke about the day:
“Some uninitiated out there in the world might tend to dismiss a Jimmy Buffett event as some flowered shirt, hula skirt wearing, overindulging, resistance to growing up, but if they had any idea how much money is generated for so many worthwhile charities, all while still having fun, they might rethink things. Maybe not; their loss.”

Live Music at the Sharking Lot

“FUN” was the word of the day and live music is one of my best sources of fun. Cedar Creek PHC hosted Dallas local Don Burke and brought in Matt Hoggatt all the way from Mississippi. Their pirate stage was graced with The Bad Monkeys, who got the crowd dancing to Buffett favorites. The band stopped at one point to indulge in pudding shots; Jello shots and other chocolate shot goodies were a staple of the Sharking Lot event – yum!

Too soon, it was time to close down the camps and head into the stadium to hear Huey Lewis and the News warm up for Jimmy Buffett and the Coral Reefers.

It was a great show, but the Sharking Lot party was the best show of the day… I’ll be back for more next year!