Joel Block is a Texas based Trop Rock singer/songwriter and Parrot Head. He performs a mix of popular cover songs and originals. Continuously working on adding original songs to his catalog, Joel was moved to write this song about the kindness of people and his community’s resilience after a devastating hurricane. Joel tells us his Story Behind the Song “Texas Proud and Rockport Strong”: 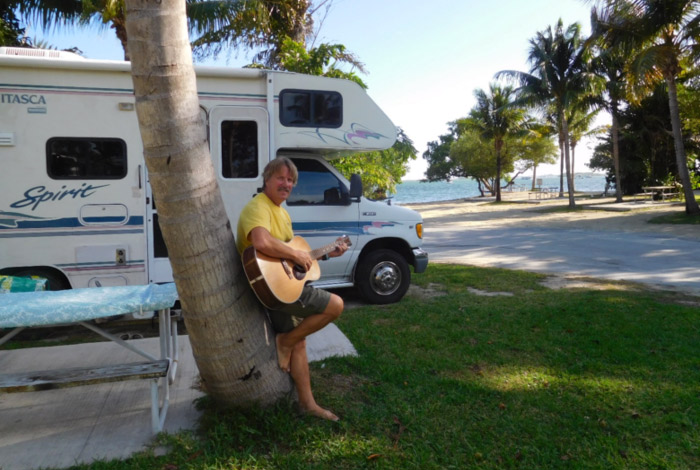 I grew up in Montana. It’s a long way from the ocean, but learning how to play guitar in the early ‘80s with only a Jimmy Buffett songbook in my hand kept me in tune with “life upon the sea.” (In fact, I even lived aboard a 26’ sailboat outside of Helena, MT for a few years!)

Classic Buffett tunes like “The Captain And The Kid”, “I Have Found Me A Home”, and “A Pirate Looks At 40” were some of the first songs I ever learned how to play, but little did I know how “Trying To Reason With The Hurricane Season” would change my life 35 years later!

After a lengthy love and musical journey brought me to the gulf coast of Texas and the wonderful community of Rockport, It was on August 25, 2017 that I got to learn first hand what reasoning with a hurricane is REALLY all about….

It has now been a year since Hurricane Harvey slammed into Rockport. The devastation left behind from this ferocious storm is still being repaired to this day. At first, the destruction was simply indescribable. The sheer power of Mother Nature…the unknown that faced most of our neighbors… the outpouring of help from countless people and organizations that had never even heard of Rockport before this storm. Truly amazing!!!

Kathy and I would spend hours and days cleaning up our house. We would even start to feel like progress was being made, but then we would take a break and drive around town only to find so much damage that our hearts would just sink again!

What really stood out though was the people. So MANY people helping as if they’d known us forever! This was inspiring. I could finally put my thoughts to paper and then to song!!! Ah, the magic of music! That night, as I sat in the dark of our small RV/lifeboat.. “Texas Proud And Rockport Strong” was born…..

Joel donates all the proceeds from the sale of his song “Texas Proud and Rockport Strong” to help his hometown. You can purchase this song or his other original tunes here: Joel Block on CD Baby

Keep up with Joel Block on his website where you can hear his music and find his latest tour dates: Joel Block

Listen and watch the video of Joel’s heartfelt song about the damage of a hurricane on a small town and the incredible support from the first responders to the strangers who came from far away to help clean and rebuild.