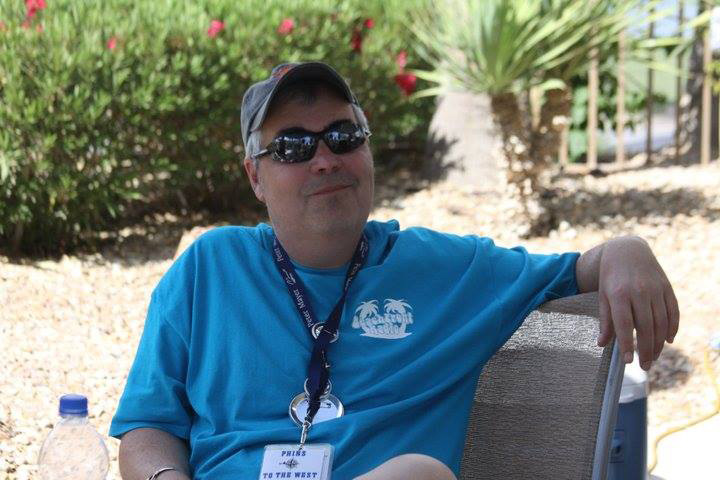 Jeff at Phins to the West (Photo by Carol Ewald)

— From “Keeper of the Flame” by Mike Miller

It’s hard to believe it has been almost five years since DJ Jeff Allen lost his courageous battle with pancreatic cancer. This is the first of a three part series commemorating his love of music and his impact on the trop rock community. 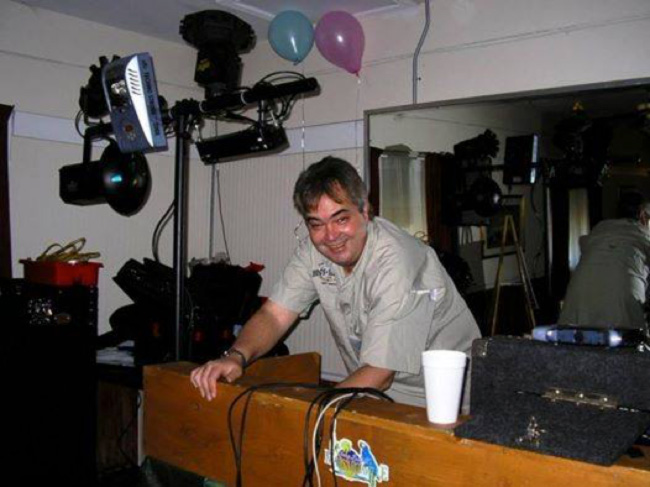 JEFFREY ALAN SLAUGH was born December 20, 1958 and was the second of four siblings. The childhood days were typical: he was involved in Scouts, earned his Eagle Badge, went to summer camp, was a good student and was well liked by his classmates. Not surprisingly, he loved music from an early age starting with Johnny Cash’s 1969 hit “A Boy Named Sue.”

Jeff absorbed music like a sponge. His knowledge and diverse music collection grew and grew. His DJ skills developed as well and he became well known throughout central Pennsylvania. Weddings, birthday parties, clubs, proms … he loved sizing up an audience and using skills to keep the party going.

Occasionally Jeff’s daughter Kate would roadie for him. She was only in her early teens at the time but she recognized “he was really good at what he did”! He loved what he was doing and would have done it full time, but the reality of being the father of three dictated otherwise.

There were health issues as well. Long before his battles with diabetes and pancreatic cancer Jeff had a condition called myasthenia gravis that causes the muscles to weaken. It put him in a wheelchair for a while. There were some challenging years; during that time music was always a guiding force. Later, he had surgery to remove the Thymus gland and eventually recovered.

Jeff embraced a multitude of musicians and styles. Bruce Springsteen was his biggest idol. No other musician, including Jimmy Buffett himself, would ever receive the level of adoration Jeff bestowed on Bruce. Jeff was good friends with Vini “Mad Dog” Lopez, who was the drummer for Bruce and the E Street Band until 1974.

In fact, Vini was responsible for Jeff meeting his idol. According to Vini, “Jeff met Bruce with Dawn and myself at a show we attended in Philadelphia. He shook his hand and got a hug from Bruce. Jeff was there when Bruce invited me to play at Met Life with him”. When E Street was inducted into the Rock and Roll Hall of Fame in 2014 Vini gave a loving shout out to Jeff, “one of my best friends in music and in my personal life.” 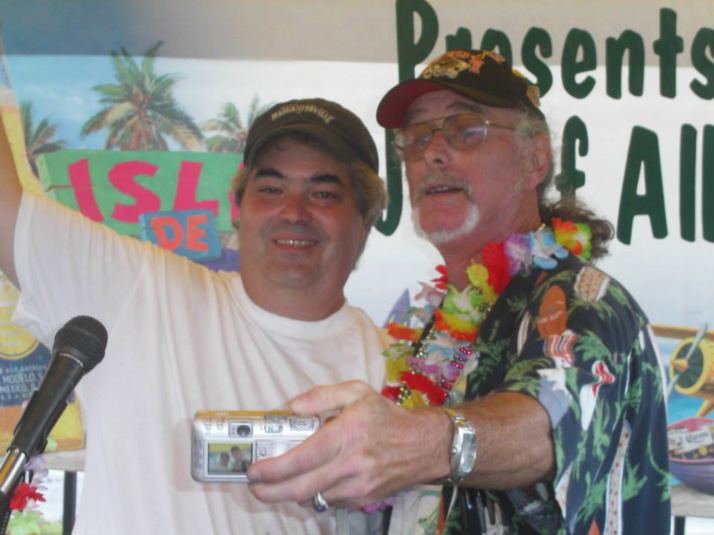 — From “Keeper of the Flame” by Mike Miller

And the trop rock journey began.

Jeff had gotten involved with the people his parents had warned him about. He had become a Parrot Head. In 1997 Jeff co-founded the Parrot Heads in Amish Paradise. And was, of course, the club’s music director.

Around this time the internet was becoming a real deal; dial up had become a thing of the past. In 1998 Jimmy Buffett was inspired to create Radio Margaritaville. He brought on his friend Steve Huntington to be the program director. It quickly became one of the most popular internet radio stations and remained only available on the Margaritaville website until it joined Sirius Radio in 2005.

Steve had complete control of the programming and in 2000 he was accepting guest DJ submissions. Jeff submitted his original one hour Amish Beach Party shows on a CD and soon gained listeners far beyond central Pennsylvania.

A few years later Ed Meyer told Jeff how much he enjoyed the spots and invited him to bring the show to Jimmy Dreamz, which was a popular internet website with streaming and all-things-Buffett, including an interactive bulletin board. On the occasion of his 1000th Amish Beach Party broadcast in 2013, Jeff credited Steve Huntington and Ed Meyer with being responsible for getting him into his radio career. Listen to a soundbite of Jeff from that broadcast here:

But most of Jeff’s energy went into DJ gigs during the 2000’s. The usual local bars, weddings, birthdays and anniversaries. And a LOT more Parrot Head events, tailgates, fundraisers and music cruises. The Coastal Jersey Parrot Head Club kept Jeff particularly busy. Starting in 2005 they hired him for all their major fundraisers and their social happy hours.

Events like Kelly’s Dream and the annual Parrot Palooza raised money for melanoma and myasthenia gravis research. The fundraisers and Parrot Head events increased and attracted musicians from around the country. Jeff’s reputation was solid among the musicians. He forged very close relationships with many of them over the years. 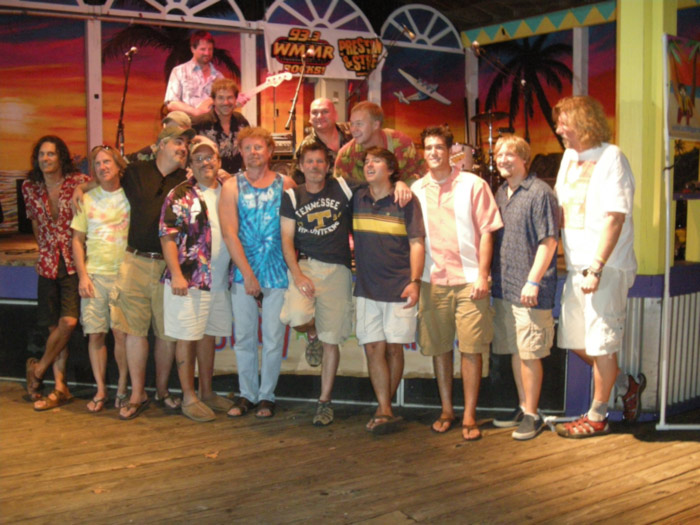 John Friday first met Jeff in the early 2000s, through Sandy Kayser. John related “She and I had recently begun seeing each other, and she told me about a gentleman friend who had started DJ’ing again. I happened to get a gig in Lancaster, PA for the Amish PHC and met Jeff up there. Not too long after that Jeff was doing DJ/MC gigs for various Parrot Head events, and I was trying to get my name out there in the Parrot Head world as a musician, so we’d run into each other on occasion and got to being pretty good friends“.

So many musicians, and fans too, tell a similar story.

Bry Harris shared that he “first met Jeff when he was working for Radio Jimmy Dreamz. We (the Parrot Island Band) were playing our first Parrot Head event… Trop Rocks the Smokies and Jeff came up and introduced himself. When I told him that I was a minister, he started laughing and asked if I knew Jimmy Buffett’s line from his song Fruitcakes about religion (“There’s a thin line between Saturday night and Sunday morning”)… I laughed and shared I had been a fan of Jimmy’s since I was 16 years old.”

Bry added “From that moment on, we developed a close friendship that lasted until his death. Our conversations covered many topics throughout the years, from music to family, fun to faith, hardships to celebrations. We walked all over that “thin line” and I am thankful for the friendship that we were able to develop.”

As friendships blossomed so did respect for Jeff’s musical knowledge. He didn’t cut corners when it came to quality, not even for friends.

John Friday continued his story and shared that “In 2008, I made the decision to go into music full time. Jeff was very supportive of the idea. I had recorded an EP at a friend’s home studio; one of the originals on it was Rita’s Going Wild. I sent it to Jeff to see if I could get it on the air. In probably the kindest cut I ever received, Jeff told me it wasn’t “ready for radio,” and that he liked the song but couldn’t play the record. So, in 2009 while Jeff was getting Sandbar Radio off the ground, I went into a “real” studio and recorded the Coastal Dreamin’ album. THAT version of Rita got airplay and began ruining me for honest work… I began to get a following outside my home territory”.

Chris Rehm, who met Jeff at MOTM 2008, added “One of the things Jeff was very serious about was the quality of the recordings he received. He was adamant about having high-quality material only. I recall him telling me that he would receive dozens of recordings every week and more often than not, there was nothing that was up to standard.”

Jeff also became friends with many of the members of the Coral Reefers. Nadirah at Buffett tailgates, Peter Mayer when he was in the area for his annual Stars and Promises shows, Doyle Grisham when touring with Buffett, or whenever he was helping trop rock musicians, as he often does. Jeff always made himself available to help in any way. In fact, his friendship with Doyle led to Jeff’s introduction to Jimmy one year in the Philadelphia Four Seasons lobby. 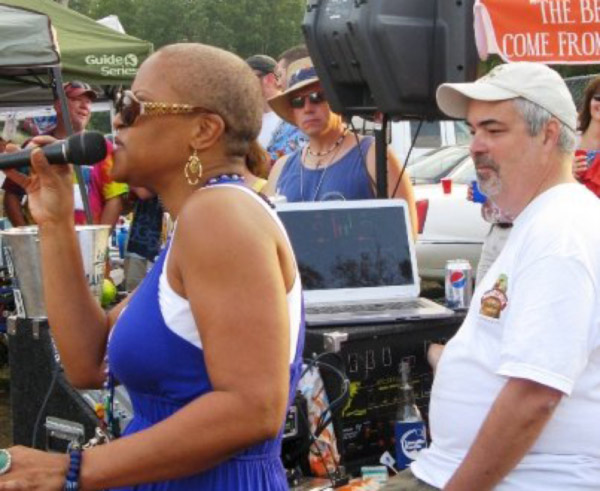 For Jeff, 2009 was an absolute whirlwind. All the stars were aligning. Internet, social media, smart phones, Buffett continued to kick ass after 60, Parrot Head clubs had increased in numbers and membership, and there were more Parrot Head music events than ever! Everything was looking up for the trop rock music genre. DJ Jeff put some wax on that board and rode that wave! 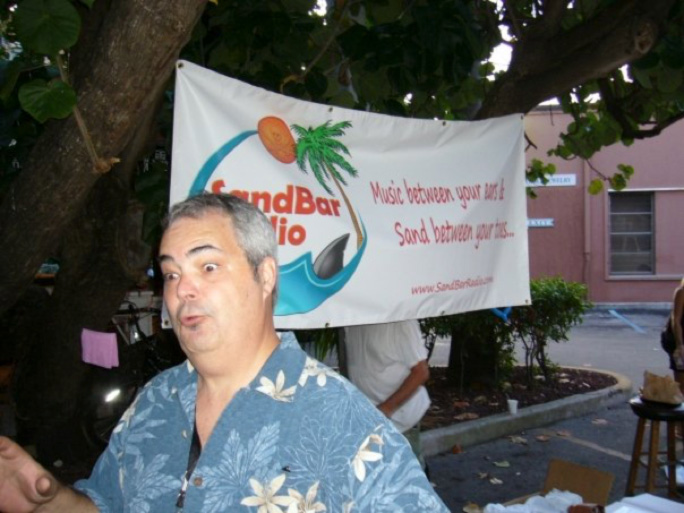 As much as Jeff was championing the trop rock music genre, he was always about variety. He mixed it up with Bruce (of course) and other classic rockers, and added in the new sound from the likes of Homemade Wine and Southern Drawl Band. Chris Rehm shared that “Jeff told me once or twice – ‘As a DJ, you can’t just play Trop Rock. You have to toss in something else to mix it up a bit. People can only take so much music about Margaritas and beaches. You’ve got to break that up’.”

SandBar Radio listenership grew steadily, if not exponentially. More and more musicians were submitting their work to Jeff. The listeners were embracing the music, as well as the real time interactivity on Facebook. And everyone enjoyed the interviews and being regaled with Jeff’s knowledge and stories. He was also using the theme days later popularized on BeachFront Radio. Manic Monday, Clothing Optional Tuesday, No Work Wednesday, Tequila Thursday, and Flip Flop Friday.

The station was on fire! SandBar Radio was only on the air eight months when it won the Trop Rock Music Association’s Radio Station of the Year award, and the Amish Beach Party won Radio Show of the Year.

And then the wheels abruptly fell off. SandBar Radio stopped broadcasting. Feelings were hurt and lessons were learned. All Jeff wanted was to get back on the air …

… To Be Continued. Part two: The BeachFront Radio Days.