Singer/Songwriter Keith Sykes released his first self titled album on the Vanguard label in 1969 and never slowed down as he continues to release solo writing projects. His years as a musician are filled with stage performances and tours with various bands, but he’s always taken time to write songs. Since the late 70’s Keith is best known for his many years of playing guitar in Jimmy Buffett’s band.

Keith spent the better part of the 80’s & 90’s as a composer authoring songs for Buffett such as “Volcano” and “The Coast of Marseilles,” Jerry Jeff Walker’s “About Her Eyes” and “I’m not Strange,” Rodney Crowell and Johnny Halladay “Just Wanna Dance” and John Prine just to name a few. Keith has over 100 songs recorded by various Artists that have sold over 25 million copies. Kieth Sykes has been interviewed and published in News Week, Time and Rolling Stone Magazine as well as a television appearance on Saturday Night Live.

Here is Keith Sykes’ story behind his song “The Best Day.” 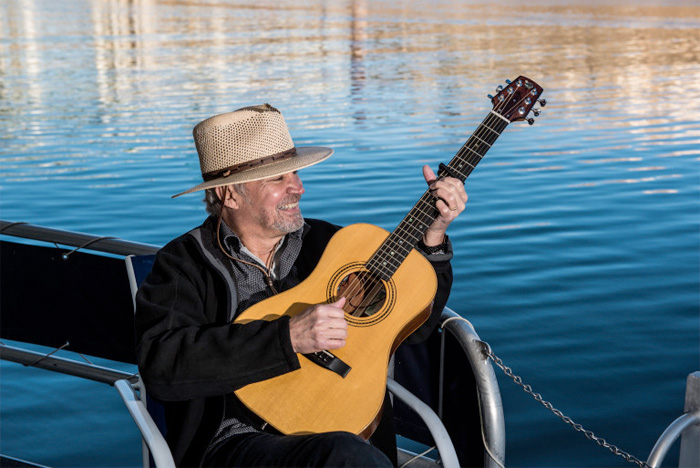 I was going to Key West and wanted to know some people to meet or places to see that would be of interest to me. I called Jerry Jeff Walker to get some advice in this regard and Murphy, Jerry Jeff’s girlfriend at that time, told me to go to Ashley Simmons’s house and I’d meet everyone I’d needed to know right there. She gave me address and off I went.

I found her house and asked the fellow who was sweeping the courtyard if Ashley Simmons was in. He said “who wants to know?” I told him my name and said Jerry Jeff had recommend I get in touch. “Keith Sykes, I know you. I was on the road with Jerry Jeff and he told me about you. I’m Jimmy Buffett.” I said, “Jimmy Buffett. Jerry Jeff told me about you when we were on a Canadian tour.”

Jimmy and I became friends from that moment on and have remained so ever since. My new single, “The Best Day”, which can be found on my “Songs from a little Beach Town” cd, it’s about that day and a few others over the years that I put together to make the one story that “The Best Day” is describing.

Have a best day
~Keith Sykes

Listen to a snipped of Keith Sykes song “The Best Day” and feel as though you were right there in Key West on that very best day: