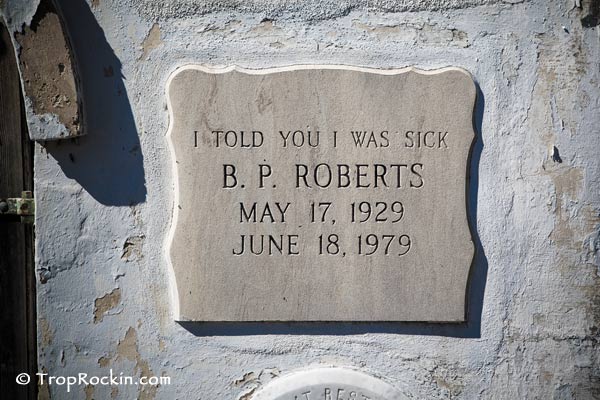 The Key West Cemetery is a fairly active place despite the majority of the people being dead.  It’s an easy cut through for residents walking from one place to another, joggers find the paths less inhibited than the sidewalks of Key West and kids ride their bikes through the center on their way to who knows where.  Thankfully, there were many times during my cemetery visit that I found myself peacefully alone.

I started out by hunting down the free tour map, which is available at the main entrance.  Once I had my map in hand, I picked a few historical graves I wanted to visit and set out to find the extraordinary people from Key West’s past.

My first goal was to find “Sloppy” Joe.  “Sloppy” Joe was a famous fishing guide to Ernest Hemingway and a local Key West bar owner.  Sloppy Joe’s (the bar, not the person) has “Sloppy” Joe’s (the person, not the bar) famous history on their website, which is worth a quick read.

Finding his grave proved difficult.  The map notes his grave is on Eighth Avenue (the pathways are labeled with mock street signs).  Turns out, there isn’t really an Eighth Avenue.  Although the map clearly shows a main path ending at Eighth Avenue, it doesn’t.  It dead ends at Seventh Avenue.  Where the path should continue on to Eighth, there are graves.  As the graves start, you can make out a possible path, but it’s going the wrong direction.

After almost 45 minutes, I found Joseph S. Russell.  His marker is on an end, which is sandwiched between graves.  Although, he does have a top marker, it is also hard to see.  Born Dec. 8, 1889 and died June 20, 1941, but people are still stopping by to pay homage as evident of the coins and stones left on his grave. 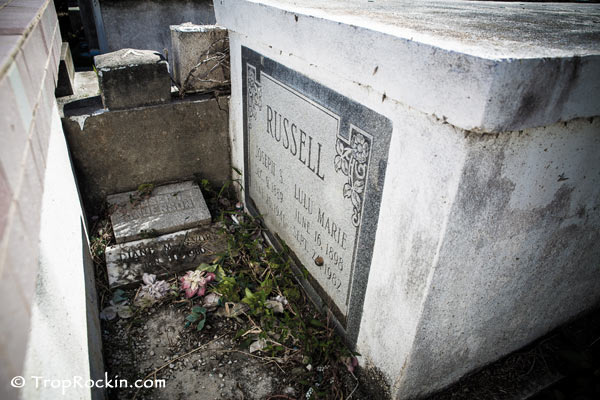 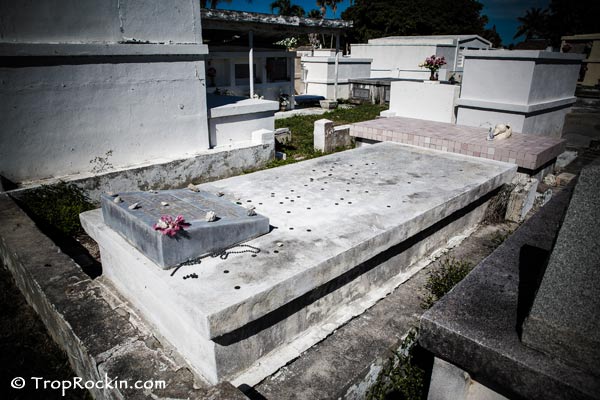 Since I spent so much time searching for one grave, with the self guided tour map in my hand, I decided to just wander and read the history of Key West through the ordinary and the extraordinary folks who’ve lived and died on the island.

There are many people I missed by not following the map, but some of the jewels of humor and beautiful statues aren’t listed on the map either.  Here is what I found: 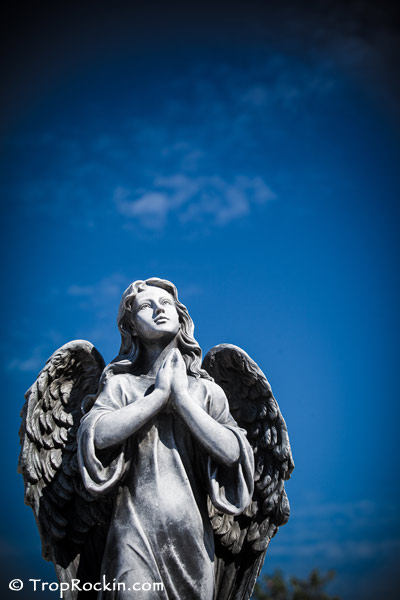 According to the Key West Cemetery map, on Feb. 15th, 1898 the U.S.S. Maine blew up in Havana Harbor, killing 260 American sailors and inciting a war on Spain.

A wonderful tribute to the Navy, but the plot also includes other war veterans. 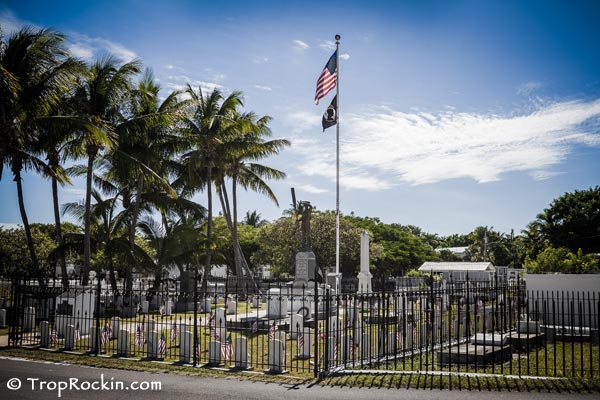 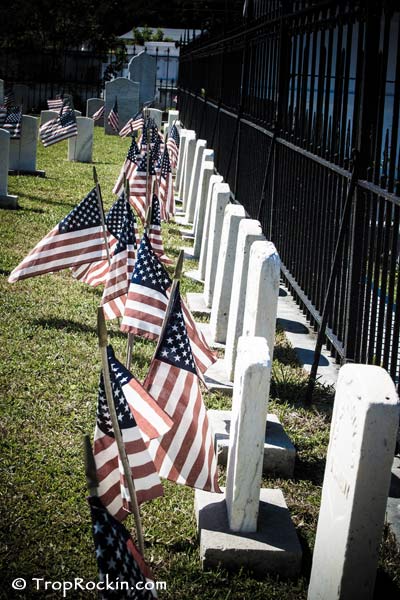 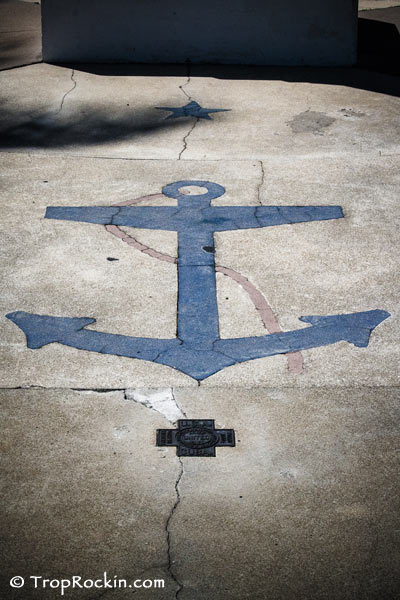 Areas of the cemetery are beautiful in their own way.  Mature trees and well worn paths. 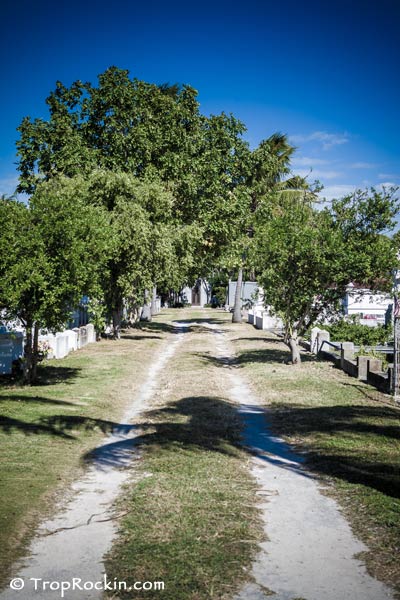 I was particularly saddened by the large number of tombs for small children. Some with names, some with out, others with just initials and a few with full heartbreaking sentiments from parents. 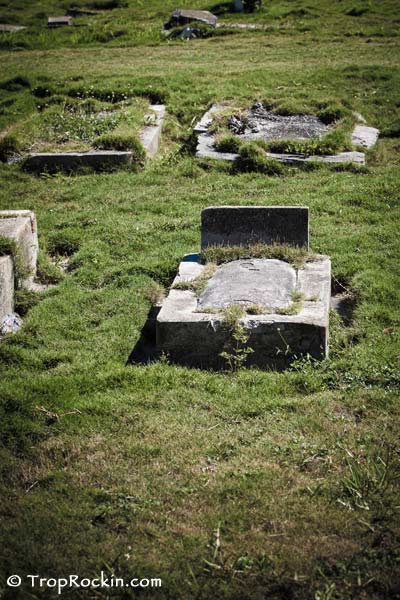 A large part of the Key West cemetery is neglected. Graves and tombs are falling apart. Many markers throughout have fallen over and lie on the ground.  Broken glass from vases falling over and shattering.  Even the old stone pillars that marked the pathways are askew on the ground, despite the new markers in place. 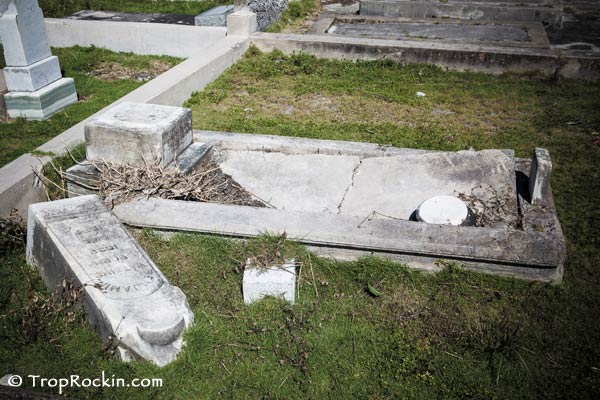 Apparently, there was another (more modern) bigger than life character in Key West.  Norm Taylor legally changed his name to Captain Outrageous in order to run under this name for mayor of Key West.  A local, Robert Kelly, keeps a memorial blog to Captain Outrageous with unique stories.  He was a local artist who painted on just about anything, especially bicycles.

Obviously Captain Outrageous is still well celebrated with so many bead offerings on his marker. 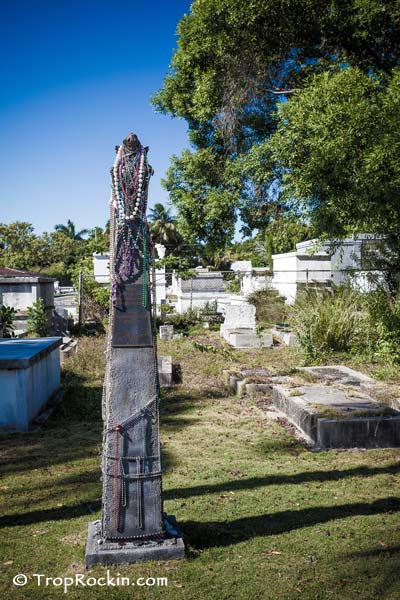 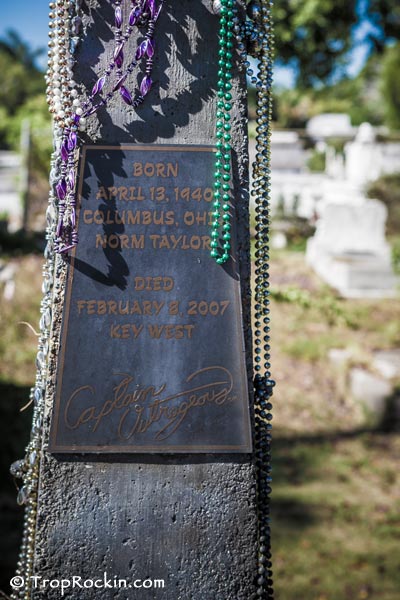 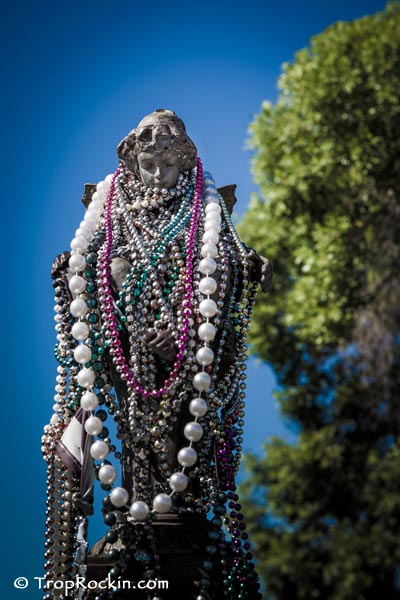 No idea about the history of the Roberts, but someone in the family has a sense of humor.  The earliest grave in the crypt is 1899.  In 1979, B.P. Roberts passed away and his/her marker reads “I Told You I Was Sick.”  The latest addition was in 2000, where Gloria’s maker states “I’m Just Resting My Eyes.” 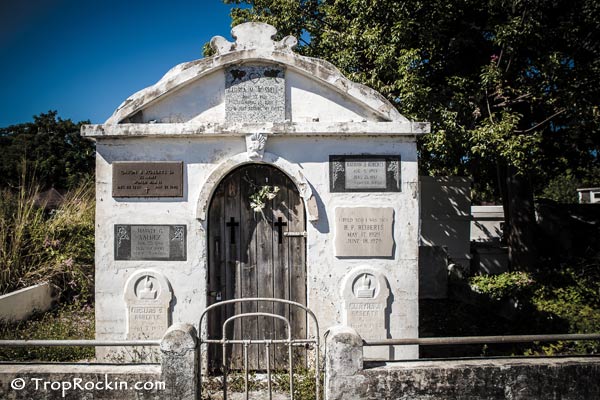 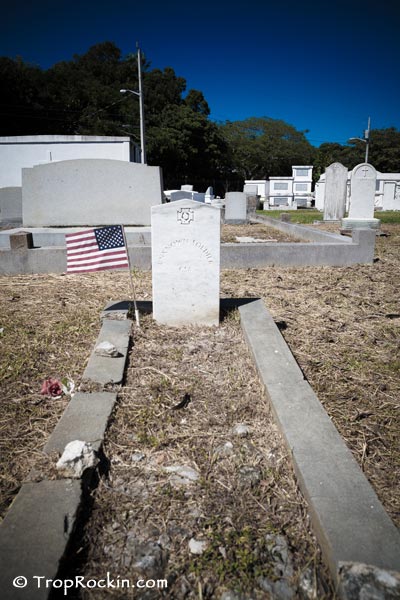 Above Ground Coffin Crypt circa 1891 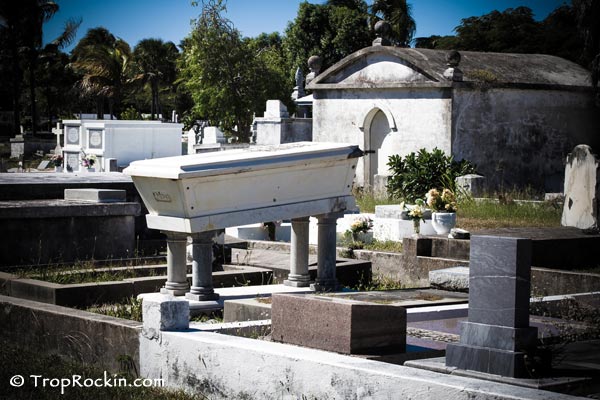 Probably the most photographed statues in the cemetery, this angel mother looks over her angel child.  Mary Navarro’s statue is engraved “To the sacred memory of a brokenhearted mother.”  Mary (the mother) died in 1907 at 44 yrs old and her daughter, Rosa, died 4 years earlier at the age of nine.  Their monuments have been standing for over 100 years and look wonderful, thanks to some restoration along the way. 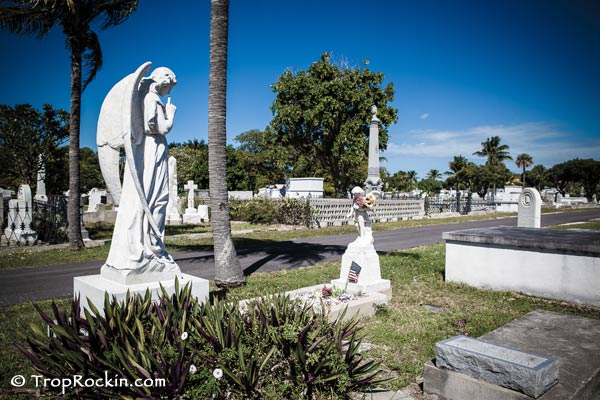 Inside the boundaries of the Key West Cemetery there are separate areas for a Catholic graveyard and a Jewish graveyard.  I was unaware that it was customary for the Jewish faith to place a stones on the graves of loved ones as a sign of respect.  Pictured here are graves with stones atop and a bowl full of stones for mourners to use. 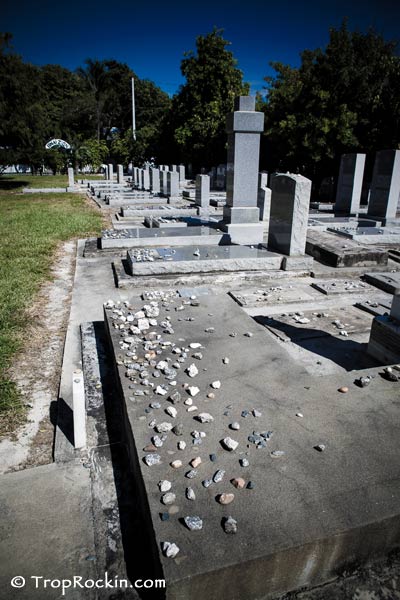 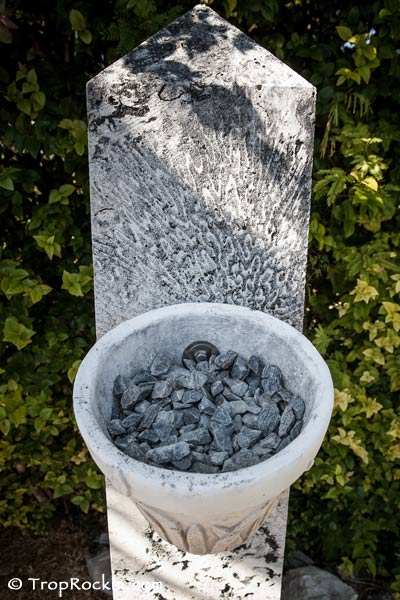 The Curry name can be found all over the Key West Cemetery.  This is William Curry’s monument and according to the Historic Florida Keys Foundation, he arrived in Key West from the Bahamas in 1847 and went on to be Florida’s first millionaire.  According to the Curry Mansion Inn, William was a shipwreck salvager and began building the now Curry Mansion Inn in 1855, which was later completed by his son in 1899.  William Curry died at the age of 75 in 1896. 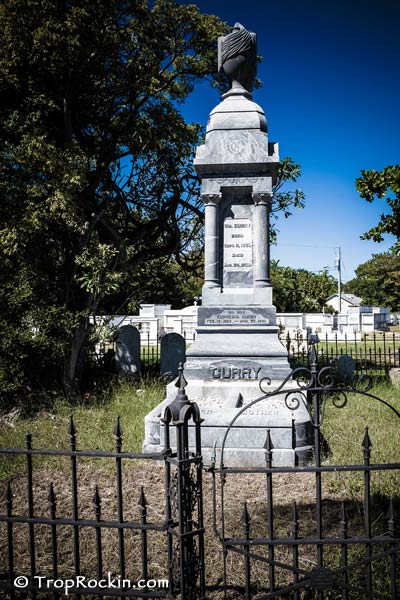 So much of city’s history and culture can be found in the Key West Cemetery.  If you get the chance, create your own self guided tour through the last century. 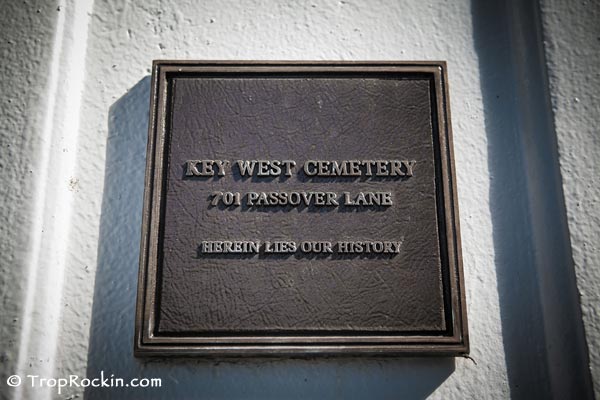