Ambergris Caye, Belize: The location was stunning. A white sandy beach, turquoise waters and a setting sun on the private beach of Amy’s family vacation home. What could be more fitting for a couple who met at a Central Texas Parrot Head Club happy hour more than 8 years ago?

How They Met
The day before the wedding, we were all relaxing at B.C.’s tiki bar on Ambergris Caye and sipping on a tropical drink (of course!). One of us asked Amy to remind us how she and Chris began dating and she told us the story about their first “non-date”. “Non-date”?

What began as a typical club happy hour, ended with Chris extending Amy a simple invite to join him and a few friends for a day sail on Lake Travis. Amy had never sailed before, but her adventurous spirit wasn’t about to let this opportunity slip by.

The following Monday, Amy found her way to the marina where Chris was readying the boat. She soon learned the other guests couldn’t make it. Chris asked if she would still like to go for a sail and offered to give Amy her first sailing lesson. She was game!

The hours passed by quickly, the sailing lessons were fun and before they knew it, the sun was on the downhill slide. They quickly agreed to anchor in a cove and enjoy the sunset view. Once they were settled, Chris offered up a cocktail AND a disclaimer, “I don’t know if you like wine, and I am not trying to be romantic, but I have a bottle of Merlot if you would like to share a glass”. A bottle of wine and two hours of good conversation later, the sun had long disappeared and it was time to put the sailboat back in the slip, ending a perfect day.

Chris & Amy consider this sailing adventure to be their first date or rather “non-date”. Must be the most romantic “non-date” ever! Just a mere 8 years later (yes, we’ve teased them a lot about how long this has taken!) — 14 CTXPHC friends traveled to Ambergris Caye along with Chris & Amy’s family and friends to celebrate the beginning of their marriage.

The Wedding
On Saturday afternoon everyone seemed to be relaxed while getting ready for the ceremony. The wedding took place at Amy’s family Ambergris Caye vacation home, The Palm House, on the spectacular private beach in their backyard. The Palm House has been Amy’s family escape for 10 years and it’s where Chris & Amy have spent most of their vacation time.

A makeshift aisle was laid out on the beach using green palm fronds, huge conch shells and vibrant pink bougainvillea clusters. The aisle led to the palm frond arch that framed the sea, pier, and passing sailboats.

As another sunset began for Chris and Amy — friends, family and local Belizeans gathered on the beach to witness two Parrot Heads say, “I do” in Paradise. 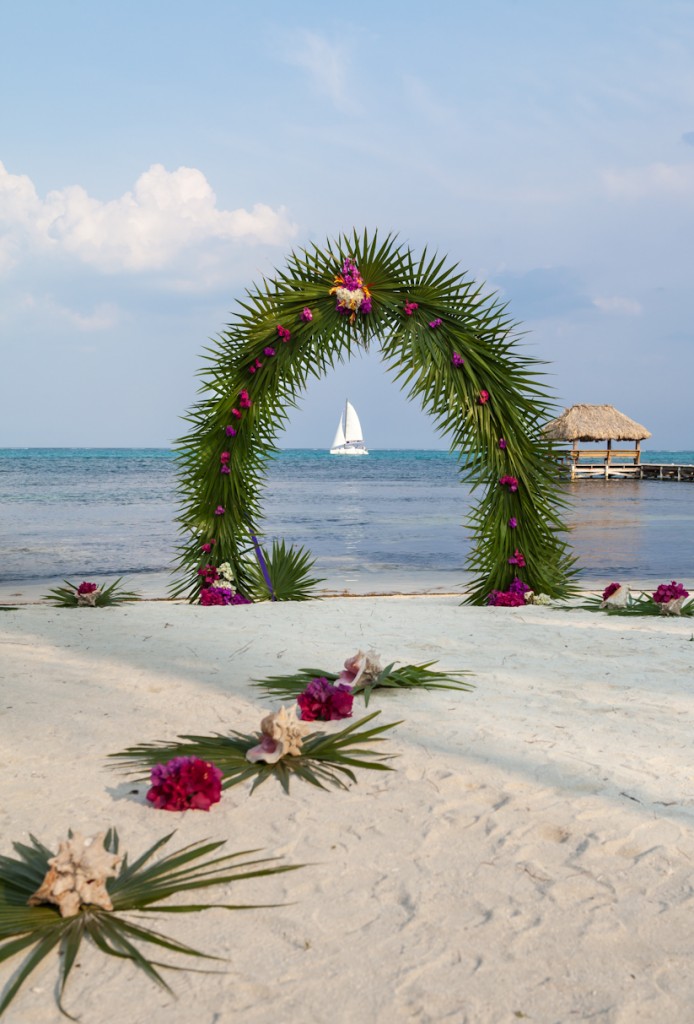 The Reception
Everyone gathered around the pool and back decks of the Palm House to enjoy shrimp salad, ceviche, rum punch and of course wedding cake! Friends and family gave multiple toasts to the new couple, but the best toast came from Amy & Chris.

Chris & Amy gave a beautiful toast to her parents, celebrating the loving relationship that spanned 40 years and their desire to follow her parents example for a life long marriage. 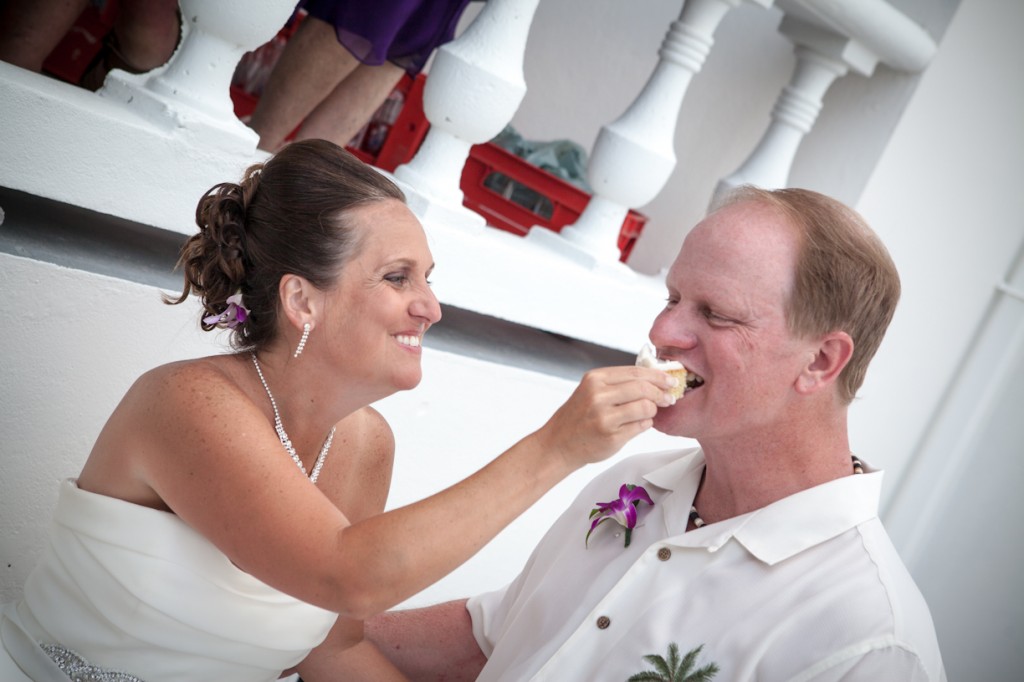 After Party @ B.C.’s Tiki Bar
The celebration kept on going into the morning hours at Chris & Amy’s favorite bar on Ambergris Caye. We mingled, tried new drink concoctions and signed our names on the rafters. A few folks were leaving on Sunday and so began the sad goodbyes, but for those of us remaining we began planning how we would spend the next days on the island.

Although Chris & Amy spent over a week on Ambergris Caye, Belize enjoying the island and organizing the wedding, this was not their honeymoon. They wanted to celebrate their new life together somewhere exotic at a place neither had ever been.  Read all about their honeymoon adventures in the South Pacific in their story: Parrot Head Honeymoon in Paradise