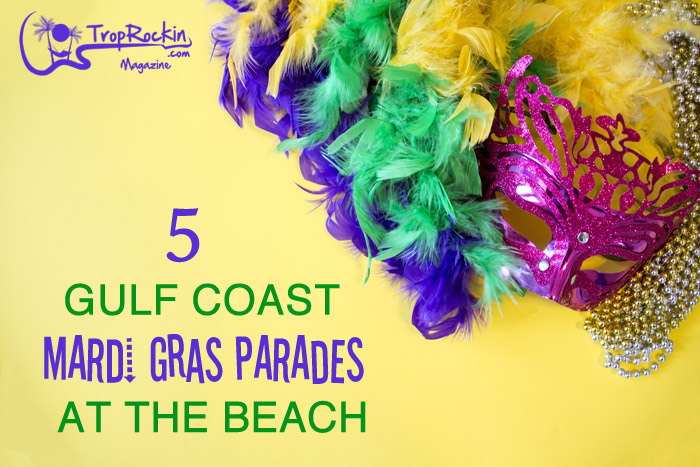 Celebrate Mardi Gras on the Gulf Coast! Traditional Mardi Gras parades combined with a coastal location is the perfect combination.

Catch some beads and hit the beach!

Celebrate Mardi Gras directly on the beach! Park on the beach along the parade route and pull out your folding camp chairs to watch the decked out golf carts and floats.

The 3rd largest Mardi Gras in the US and this year is the 109th celebration. Twenty-five parades and typically over 30 music acts perform.

Parade themes are unique! Such as the Decorated Umbrella Parade, Golf Cart Parade and Fiesta Parade. You can buy tickets to Balcony Parties that overlook the parade route or purchase a spot to actually ride in one of the parades.

Stay for the weekend. Enjoy the beach during the day and the parades at night.

“Moon Pies on Main” Mardi Gras festivities is a fun family friendly event where they throw Moon Pies and host a kid and pet parade.

The main festival is in downtown Pensacola with a large parade and an expected 100,000 attendees.

The Krewe of Wrecks Mardi Gras Parade is March 3rd and looks to be a fairly short parade route. Most importantly, it ends at the beach! The after parade parties are at various locations, but the Boardwalk is the main shindig with live music.

Panama City Beach has the most beautiful white sugar sand and emerald green ocean. The Mardi Gras festival has a great line up of country and cajun music and a full weekend of events.

The parade travels right by the beach and both nights end with a fireworks show over the ocean.