I recently heard a line from a movie that referred to steel drum music as creating a physical reaction to listeners. I also sat down with steel drum player extraordinaire, Mark Mireles about his musical career with this instrument.

Mark told me music has been his life since sixth grade in Houston, Texas, where he was originally a low brass instrumentalist. Classical guitar eventually became his choice and when Mark started college at San Jacinto College, he concentrated on that instrument style for his first year.

Everything changed when the director in charge of the percussion area brought steel drums into the program. Mark credits Jeff Gleason, the director, as being his mentor. “I fell in love with steel drums and wanted to play the rest of my life,” Mark reminisced. He chose a specialty in tenor pan, which is what you see him play today. 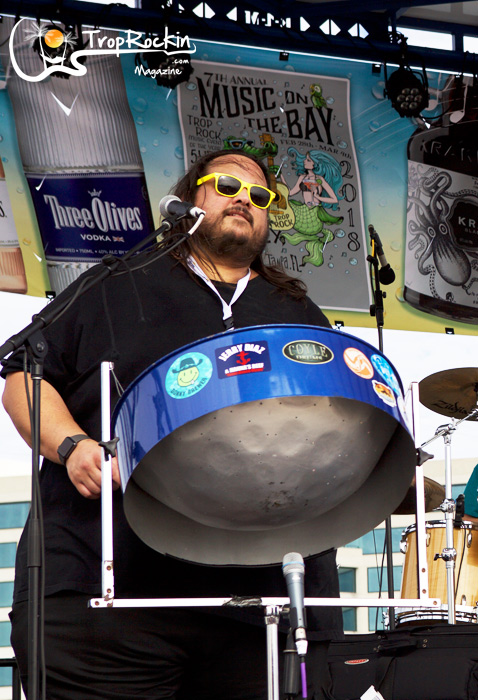 Before long, Mark was performing in his first gigging band, called Tropic Envoy and credits this experience as having “taught me the ropes.” He went on to graduate with a Theory and Composition music degree at Lamar University and taught public school for six years.

What a great job he did during his time at Galena Park High School! Mark was the director of a 21-piece steel drum orchestra, which was the first high school steel drum group in the Houston area. This group toured extensively and even played for the U.S. Congress.

He and a former student formed the Tropicats Duo and released a Caribbean rhythm style album in 2002. They weren’t yet playing Trop Rock, but that was soon to come. Jeff Gleason influenced Mark again as he was Mark’s conduit into the Trop Rock music scene through Kelly McGuire.

The first time Mark performed at T-Bone Tom’s in Kemah, Texas was with Kelly and he continued to play in the Trop Rock genre. He went on to tour with Kelly extensively and still plays with him on occasion. Once Mark met Jerry Diaz, he began his dive into the Trop Rock world in earnest.

Mark also earned a degree in interactive media and stays busy doing web design, when not working with music. Music is certainly in the forefront, however, and Mark’s versatility is evident in the albums he has recorded. He has a solo album entitled “Free,” and a Christian music EP that was released with the band Adora. The song “All You Ever Wanted” was number one on the Christian music charts and Mark was voted Worship Artist of the Year and Musician of the Year.

“Christmas From the Hip” is a Christmas album to be released in late 2019 and the album “Songs My Friends Wrote” will hopefully be out in a few months. This latest project features songs written by Mark’s many Trop Rock musician friends.

Mark is an accomplished singer, steel pan player and one of the nicest fellows around in the Trop Rock world. You can find him performing with Jerry Diaz and Hanna’s Reef just about every weekend. When is comes to great musicians, Mark Mireles is the real deal.

Another great article Cindy! And a great subject in Mark Mireles. I hope that eventually everyone knows how talented this guy is (and not JUST on the steel drums!)

Thanks so much for the nice comment, Jerry. It was so great to interview Mark and share with readers more about this super talented, all-around-great guy!