If you’ve been to a Jimmy Buffett show, particularly a parking lot party before showtime, chances are that you’ve seen a bronzed, blond fellow applying “number tattoos” to various concert-goers. Maybe you’ve heard him answer to “Hey, Hollywood!” This individual would be the one and only Michael Holly.

If this were a normal time in our Parrot Head lives, we would be gearing up for the beginning of Jimmy Buffett’s tour. In fact, about a year ago, I managed to catch Mr. Buffett at the start of last year’s tour in Orange Beach, Alabama.

Since we’re not sure when this year’s concert season will begin exactly, I thought it would be a good time to focus on one of Jimmy’s biggest fans. 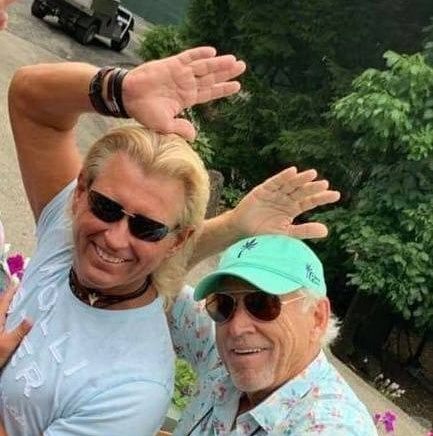 I just had an interview with Jimmy Groovy and he gave me a quick introduction to Michael Holly, who looked as if he had just walked off a surfing beach, but without the surfboard. Others were calling him by his nickname, “Hollywood.” I honestly didn’t know who he was, but before I attended the Las Vegas Buffett concert last October, I felt that he would be there, and I wanted to know about him.

I found out how he’s truly lived much of his life like Jimmy Buffett.

As many of us first learned to love Buffett’s music through the iconic album “Songs You Know By Heart,” so did Michael Holly. His very first time to see Jimmy was in Michael’s hometown of Toledo, Ohio in 1989 and after the show, he quickly decided he should attend one concert a year.

That decision lasted for ten years, but after discovering much of Buffett’s older music, Michael made the decision to attend as many concerts at he could. When we visited in Las Vegas, the upcoming concert would be #219 for him! 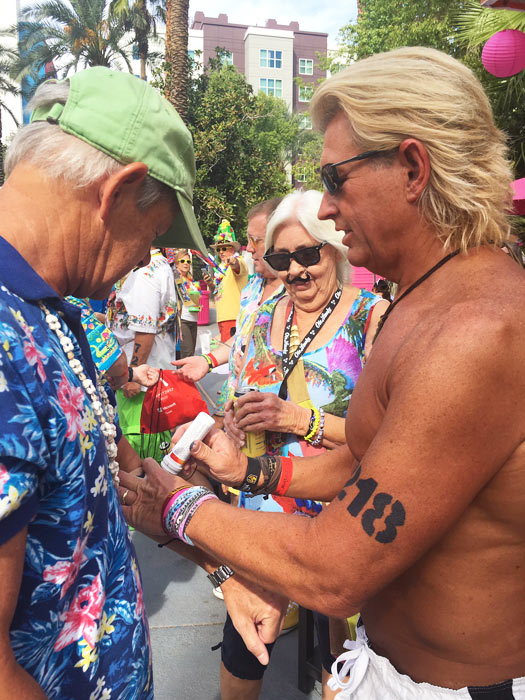 Michael has attended concerts over 90% of Buffett’s performance venues and has seen him 15 times in Europe alone. When I asked him what his favorite venue was, he immediately named The Shell amphitheater in Waikiki and told me that outdoor venues are his favorites.

Best show? That would be Anguilla in 2007. Apparently accommodations throughout the island were taken over by Parrot Heads and were at a dear premium that week. Michael wound up contacting a gas station for help, which led to renting a whole house for $160.00!

After a while, the number tattoos began to happen. This would be a number on your left upper arm, which indicates how many Jimmy Buffett concerts you have attended.

This custom began before Michael had made 100 and he used a henna tattoo while seeing Jimmy at Jazzfest in New Orleans. That type of temporary tattoo wasn’t the best, so now he uses window paint and stencils. The window paint dries quickly and comes off easily with soap and water.

His 100th show to see was in Tampa, Florida and Buffett came out to the parking lot and Michael was able to show him his arm. Michael has helpers at big concerts and he’s “tattooed” over 500 fans in Indianapolis and over 1000 in Cincinnati. His 200th show was in Jones Beach and he had front row seats. 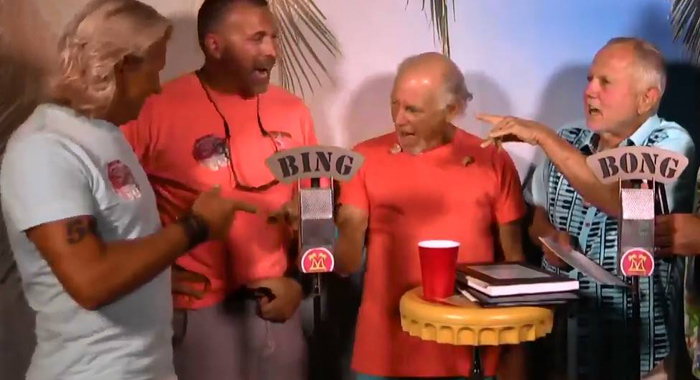 How did he get to meet Jimmy Buffett?

That answer has several facets to it. Michael owns a beach bar in Costa Rica (his wintertime home) and it was featured on the House Hunters television show. In the episode he talked about what a big influence Jimmy had been in his life and how the property was inspired by JB.

Somehow, Jimmy saw the episode when it aired and sent a video crew to Michael’s place to film it. That footage was then used on the big background screen at all the 2016 Buffett songs when Jimmy and the band performed “Margaritaville.”

Jimmy knows Michael and calls him by name. At the Alpine Valley concert in 2019, Michael was able to put a tattoo on JB’s arm for the number of concerts for him. And what did that temporary tattoo say? “ALL”!

There is a group of select fans that Michael calls the “Core Crew.” Those select folks have been to over 100 Buffett concerts and a very few have attended over 200. Mac McAnally calls Michael and this group “The Number Guys.” There is even a canine concert attendee named “Parrot Head Stella!”

Many also know Michael’s mom, Carol Mays-Sovay, who has the popular Facebook group called “Jimmy Buffett – Parrot Head Nation.” Carol has also seen well over 100 JB shows and will answer to her nickname “Mama Hollywood.” She is delightful and a gem in her own right! 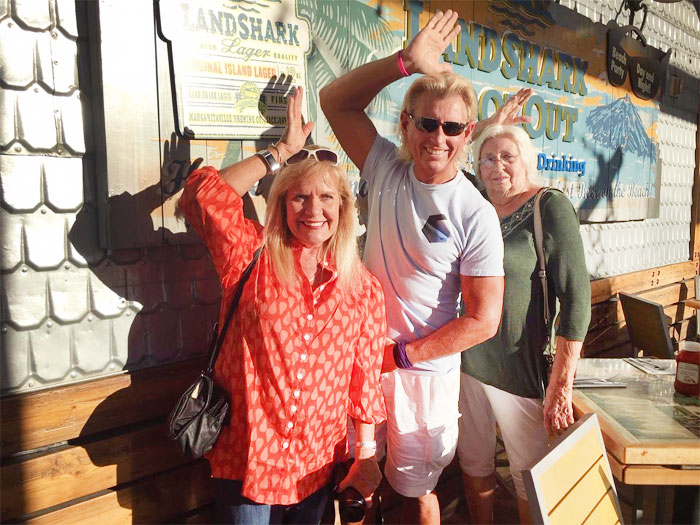 On Meeting His Biggest Life Influencer

I’m not sure what show will be the next for Michael, with the nationwide quarantine going on, but you can bet he’ll be in attendance at the first one available. “I’ll keep on going to concerts as along as Buffett keeps playing,” he told me. He looks on Buffett not as an idol, but as a mentor. The following is Michael’s account from a few years ago on meeting Jimmy and how he feels about him:

“Occasionally in life you come across someone who inspires you in some way to strive for something extraordinary. When you are able to bring that inspiration to life, have that mentor recognize your efforts, and meet him in person, it is a rare occurrence. I was blessed to have the intersection of all those culminate when meeting Jimmy Buffett in Cincinnati Saturday night. As the provider of background music to my life and the inspiration for creating a lifestyle brand and traveling worldwide, it was truly an unparalleled experience.”

So, that Las Vegas show was #219 for Michael Holly. It was also #31 for me! Long live Jimmy and the lifestyle and attitudes which he inspires. 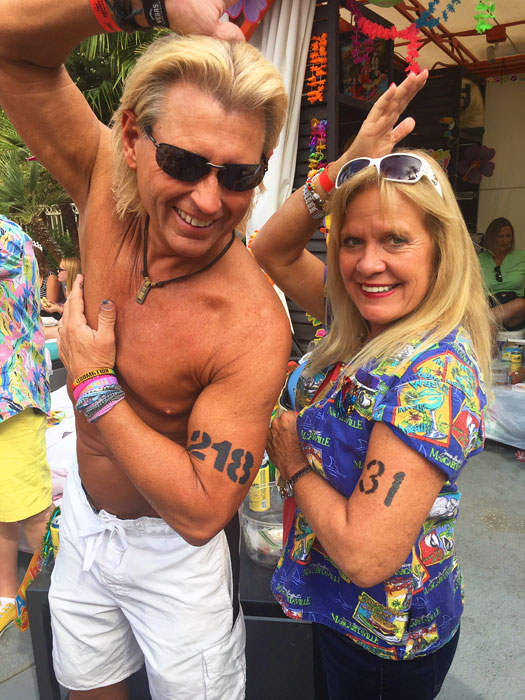 I love "the Numbers People"! They are a great group! Oh my they make me laugh and sure make the tailgate party an unforgettable event! I love following their adventures and infamous exploits LOL!! It's such a blessing to be able to hang out with them and share in all the good times when we are all able to attend the same concerts! Fins Up!

Hollywood is awesome ?. Always has time to talk to parrot heads. Truly a great fan

Loved the story! I keep writing parodies of his songs and I would just love to meet him. Even if he told me to "knock it off"! Lynn Robb

Glad you enjoyed it!

Michael to me is a great guy and a good friend. Besides I call him Tarzan! See you soon Michael!! Steve Hoffman

He was so gracious at our interview & loved getting to know his mom, too!