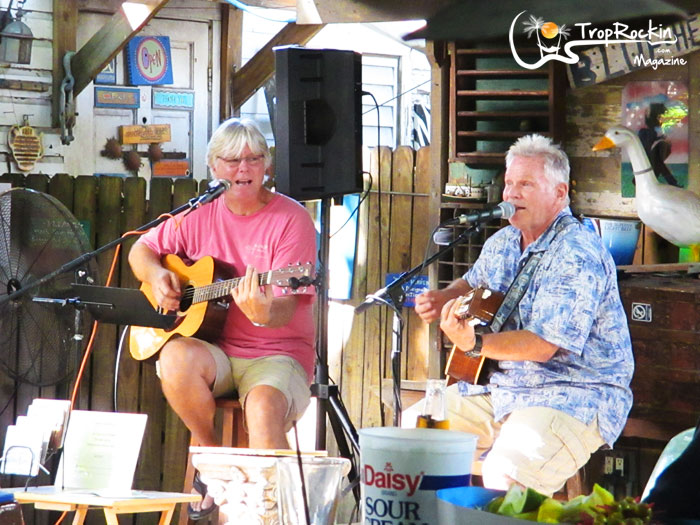 Tuesday is a favorite day to wake up and trop the island as we plan to prepare for Trop Rockin’ Magazine’s “Tuesday on the Island” fan appreciation party. We start out with a stroll to Blue Heaven to meet and greet all the early birds and Trop Rockers enjoying that first breakfast with a mimosa. One of the best parts about Tuesday… no lines at the Blue Heaven. Trop Rock artists hanging out, performing on the small Blue Heaven stage and  Sunny Jim ends up sitting in with most of them. This really is the best way to start your off your Trop Rock week…  great talent and mimosas! Plus load of fun watching folks go over to get their palms, cards or future read for only $5. Sunny Jim wouldn’t tell us what the cards held for him.

Then it was off to Koz’s Green World Gallery on Duval for the kickoff of live artists performing their CDs in the gallery. Caught some hugs from “Highway 1 Band” and enjoyed some listening time to “Nowhere to Rum.” Our annual Green World Gallery mimosa toast went well and off we went to Island Dogs for the Trop Rockin Magazine party. A good 200 friends and fans joined us for live music by Dave McKenney, Jimi Pappas, Don Middlebrook and John Patti.

Closing out our night at The Smokin’ Tuna with some “A” lister’s like Thom Shepherd, Mike Miller, Rob Mehl, Scott Kirby, Christopher Dale and Charlie Imes. Tropped out of the Tuna headed to hear Tropical Soul at Hog’s Breath Saloon with special guest Jimi Pappas and John Patti (these two might be the busiest musicians on the island this year). Off to the Conch Republic to join James “Sunny Jim” White who was packing in the crowd. Since Schooner Wharf was too close not miss, we caught the acoustic Southern Drawl event with special guest Thom Shepherd all sharing their great music on the island. Closing time sends us off to Hogs Breath to enjoy late night entertainment with Jimmy Parrish and The Waves carrying the torch after years of Hugo Duarte and the Full Sail Band kept us up into the wee hours every night. What a wonderful “Tuesday on the Island.”

Wake up Wednesday to mimosas with The Conch Fritters at Koz’s Green World gallery to learn that Dusty Barber will not make the island this year. The performance was spot on as John Kaminski filled in as a Fritter with Barry Olsavsky and Mike Devereaux at all their Key West performances. I find it hard to leave Koz’s gallery when Rob Mehl brought stories and island songs after The Conch Fritters.

Trop Rockin’ Tammy headed off to the Casa to catch the JP’s (Jimi Pappas & John Patti) on the beach stage and to swing in the hammocks (one of the few days you can easily grab one!). Then off to Smokin’ Tuna for the annual BeachFront Radio “Welcome to the Island” party where Mike Nash, Sunny Jim, Rob Mehl, Brittany Kingery, Dennis Davis and more entertained.

Pincher’s Crab Shack was a great stop after Koz’s to hear Roger Jokela singing as you entered this nice little place on Duval. Capt. Tony’s for The Boat Drunks acoustic jam is always a nice sit in for a cocktail and music. Rum Barrel afternoon with Bill Cockrell (Southern Drawl Band sitting in) and John Friday (“Jersey John” Haney sitting in) as they both had their CD release parties back to back. Rum Daddy was there again this year and JD from Southern Drawl Band debuted his own song on stage with Bill Cockrell.

Since I had my rum shoes on we had to stumble into The Bull for some James “Sunny Jim” White dance time. Tropping to the annual Hog’s Breath parking lot party with Jim Morris and the Big Bamboo Band is always a Wednesday highlight for the fans and Trop Rock artists milling about in the crowd (Bill Cockrell, Jerry Diaz, Christopher Dale, Mike Mangum, Charlie Imes). The Boat Drunks packed in some great artists to enjoy their show at Capt.Tony’s ( Nadirah Shakoor, Cosmo and Richie of the Young Rebel Goombas band and Thom and Coley Shepherd).

Click Here for Part 2: Thursday highlights including the Jimmy Buffett concert at MOTM.

Wow! I'm already getting tired! (not really)-- there are so many fantastic musicians and places to go and see! MOTM is 'set in stone' on our annual calendars! Time to take our 'Rum Shoes' in for re-soling! ;-)

I am looking for a shoe elf too..... xo Millie Marie Taylor