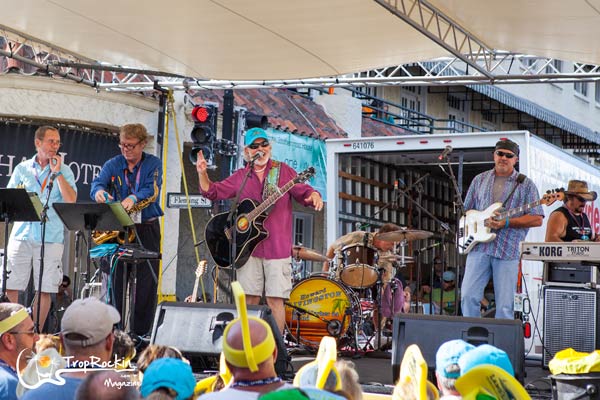 Text and Photos © of the authors / photographers who contributed to this article.
Howard Livingston & MM 24 Band at the MOTM Margaritaville Street Fest

So many wonderful moments and no way to cover them all.  We asked friends of TropRockin’ to share with us a favorite event so we could present a wide variety of highlights and perspectives.  One constant in all of the memories is the love of Trop Rock music, the artists and the friends we spend a week with in Key West every year.  These are the good times in life.

Music of the Heart by Carol Ewald

When Tammy Camp asked me to write an article for TropRockin’, she asked me to select a performance from MOTM of my choice. Well, that’s no easy assignment for sure since it is physically impossible to be at every amazing, magical music moment that we had available to us. From the small venues downtown to the Official PHIP schedule at the Casa….you’re gonna miss something.

I think we were all thoroughly entertained all over town by so many of our Trop Rock favorites as well as the new pioneers entering the world of Trop Rock. I love seeing this new talent coming onto the scene! How can you possibly pick a favorite? So instead of writing about the actual music which was phenomenal no matter where you were, I am going to write about a different kind of music. The music from the hearts of Parrot Heads and Trop Rock fans.

I am speaking of the symphony of support and caring which I experienced first hand. As most of you know, this was the one year anniversary of losing one of the most influential people in our Trop Rock Community….DJ Jeff Allen. He was also the love of my life.

I was surrounded by beautiful music from the hearts of so many. People I didn’t even know personally sang amazing solos and wrapped their harmonies around me in comfort. Friends and fans embraced me everywhere I went with choruses of love and support. Trop Rock artists dedicating songs of appreciation and remembrance in the hope of bringing me a smile….which they did.

The symphony continued to flow in support for others as well. The fundraisers for our own Hugo Duarte were vast as we all missed this icon of MOTM on the Hog’s Breath stage and came together to send him our strength and healing powers with his fight. 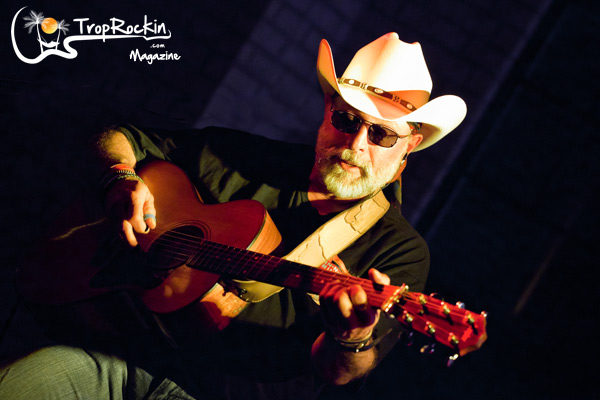 From the overture through the finale…..it was music unlike any. You’ll never hear more perfect notes and chords….nor will there ever be a ”finale”. It will be a never ending symphony perpetuated by Parrot Heads and Trop Rock fans.

We’ve lost many within our musical world and unfortunately, we will lose more but the music will go on and thank God for all of the incredible musicians and songwriters that carry their memory.

I am proud to be a part of it and have all these people as friends and in my life. Thank you for the music of your hearts.

On October 27th & 28th, the very 1st PIT STOP PARTY, TOO! was launched at Boondock’s Grill & Draft House at MM27 ½ in Ramrod Key! Two solid days of music and fun, presented by The Southernmost Coconut Castaways, and hosted by Steve Tolliver & the Trop Rock Junkies.

It was an instant SMASH! Over 15 different singer / songwriters dropped in and took the stage during the two days, each bringing us their own style of Trop Rock music. 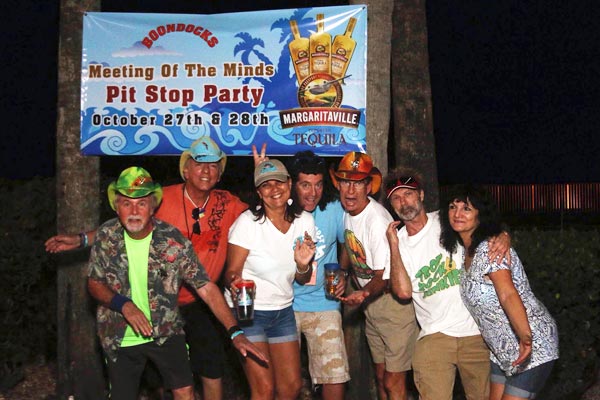 Brent Burns hung out for a while and enjoyed some lunch and wine. Of course he played the songs everyone wanted to hear but he had a funny story to lead into one of his songs. He talked about how lucky he was to have a wonderful wife like Pam, but he said he understands that he is not #1 with her. Her #1 is tennis. He explained that he is happy just to be in the top 5, then went into his song about it called “Top Five”.

Sam Densler from Songwriters Island Radio was there for most of the day on Tuesday, doing live broadcasts. He asked if we would mind if he brought along someone that he thought we would really like. Her name is Marisela. We said sure, not really knowing what to expect. Marisela took the stage early that evening and rocked the house! From Venezuela, she has that South American vibe that showed when she covered a song by Shakira. She put her twist on some rockers by Nirvana, Guns & Roses, and Sheryl Crow… She was asked back up to sing with the Trop Rock Junkies. Marisela was definitely the biggest surprise of the event. We are proud that she made her US debut at our party. She’s amazing!

Howard and Cyndy Livingston came out to spend the day at the Pit Stop Party Too. Every time you looked at him you could see he had a big smile on his face. I asked him if he was enjoying himself and he said that he never gets to be in the audience and enjoy other musician’s shows, and that he was “loving it.” They brought their two Golden Retrievers, Anderson and Gracie. When Howard would get up on stage, Anderson would try to get away from Cyndy and go to Howard. Howard explained that when he plays music at home the puppies are at his feet and so Anderson didn’t understand why he was being kept at the table. Howie asked the crowd if they minded Anderson joining him on the stage and of course everyone loved the idea! Howard announced that this was Anderson’s stage debut.

We want to thank all the artists for making this event a success! 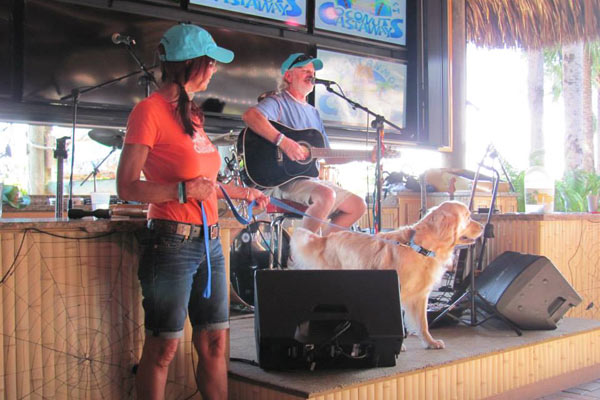 Howard & Cyndy Livingston along with Anderson, who’s showing no nerves for his stage debut.

John Friday at the Rum Barrel by Tammy Camp

Thursday afternoon at the Rum Barrel is one of my favorite events during MOTM.  Just like last year,            John Friday and “Jersey” John Hanney were Trop Rockin’ the roof top bar.

Even though it was a warm afternoon, it didn’t stop the chorus girls from dancing their routine to one of John Friday’s signature songs “Worst Pirate.”  A hilarious song with a catchy groove detailing why girls are the worst pirates.  “So where’s your eye patch, Where’s your peg leg? If you’re a pirate, where’s your gun? Where’s your booty, Your sassy parrot?, I can’t picture you on a bottle of cheap rum!”  So much fun to see the girls act out the song on the dance floor.  John kept the fun going with Good Advice, another fun song giving advice to men about marriage, some of it based on real life experiences.  Yes, he really did tape a football game over his wedding video.

The mix is always great with John.  Original ballads are sprinkled in between the funny songs along with a cover song here or there.  He keeps it lively and best of all, telling stories of his mistakes that have turned into great songwriting.  Always a pleasure John! 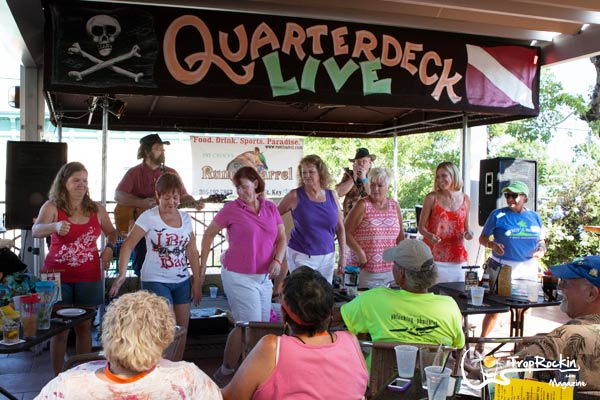 John Friday along with his chorus girls!

One of my favorite parts of Meeting of the Minds is the Street Party on Friday afternoon each year. Of course, that might be because my local Parrot Head Club in San Antonio, Texas, is always ready to dress up for a party. With the 2014 MOTM theme being “Havana Daydreaming,” most of the over 40 SAPHC members dressed up. The ladies were vibrantly colorful Carmen Mirandas and the gentlemen wore guyabera shirts, straw hats and chomped on big cigars.

Two favorite Trop Rock artists performed: Jim Morris and the Big Bamboo Band, plus Howard Livingston and Mile Marker 24. With fantastic music playing, the San Antonio group swayed, sang and posed for photos. Next time, we’re going to put out a photograph donation basket and give the proceeds to a Trop Rock charity! 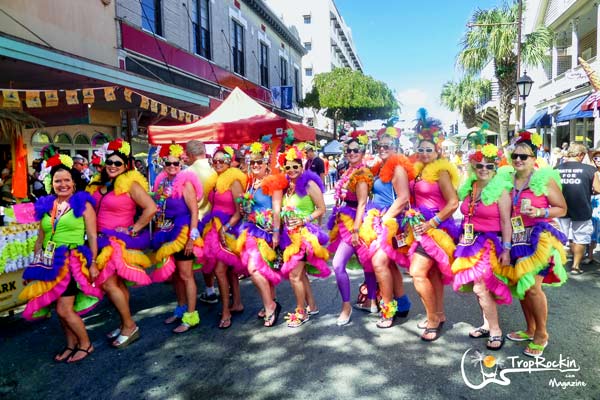 Day 3 of my Staycation: It was (another) beautiful day in Key West with bright sun shine, warm ocean breezes, and Thom Shepherd and Coley McCabe on the Beach Stage at the Casa Marina Resort.

From Austin Texas, Thom is tall, dashing and wears a big ol’ hat. Coley is simply adorable with a touch of sassy. Together they have a playful energy that engages you with every song.

We were treated to the hit singles: Djibouti, Redneck Yacht Club, Riding With Private Malone, Simplify, I’m With U, and other favorites including I Phlocked a Parrot Head. But the highlight of the afternoon was when Thom and Coley shared their story performing a duet of That’s What I Think (When I Think About You). Their harmonic voices and big smiles made this sarcastic romantic comedy even more special. So glad I had put them on my “Must See” list! What a phun day! 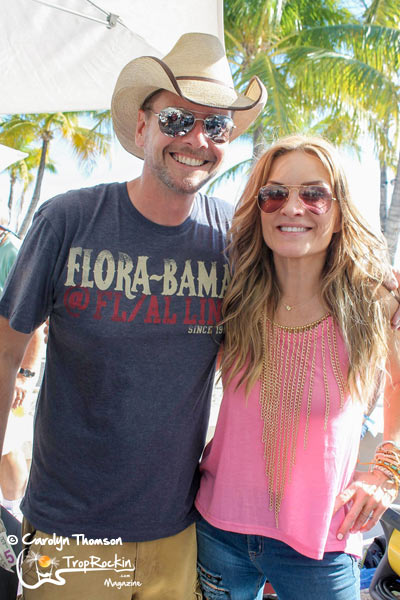 Willie T’s in Key West add The Conch Fritters to their lineup every year during MOTM. The Conch Fritters bring a wonderful selection of original and altered music together with Barry “Pan Man” Olsavsky and Dustin Barber (Matt “Little Fritter” Olsavsky was absent this year). They have the steel drums and a guitar style that brings the Parrot Heads Phlocking.

Thursday I attended the “Welcome to the island” Treasure Coast and Phun Coast Parrot Head parties with Melanie “Djembabe” Howe sitting in with The Conch Fritters. The energy that flies off from one quick hat change to another takes you from Marley to Mexico. The theme Friday was “Halloween Extravaganza” with The Conch Fritters and fans dressed up for a TropOween. Saturday The Conch Fritters held up to the Pirate Party with all mates on deck. Sunday was non stop energy as The Conch Fritters laid out another fun hat costume changing performance for the Bon Voyage Party. The party themes and costumes are no disguise for the ability to put out some of our favorite tropical music. 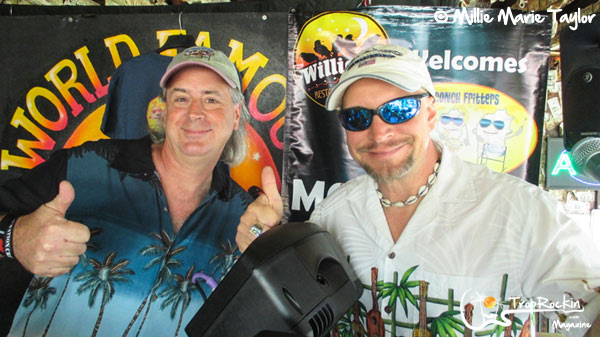 Performing many favorites like “India” and “All The Tea In China”, Peter also dedicated “Faith In Angels” to Hugo Duarte who lost his battle with cancer only a few days later. They debuted a new song, “A Land Called Summer” and part of the show featured Peter’s talented son, Brendan who just released his first EP at Meeting of the Minds.

It’s almost mind boggling the amount of talent that was on one stage and the music, as usual, was mesmerizing. A fantastic performance that seemed to fly by so quickly as you couldn’t help but get wrapped up in the magic of The Peter Mayer Group.

Great news clips & stories from MOTM!! I echo what Carol Ewald said--the only hard part about experiencing MOTM is knowing that while you're in one place enjoying great music, performances & friends-- you're missing out on so many other events going on at other venues at the same time! I've got to look into 'cloning' so I can someday be 'everywhere' at once! ;-)