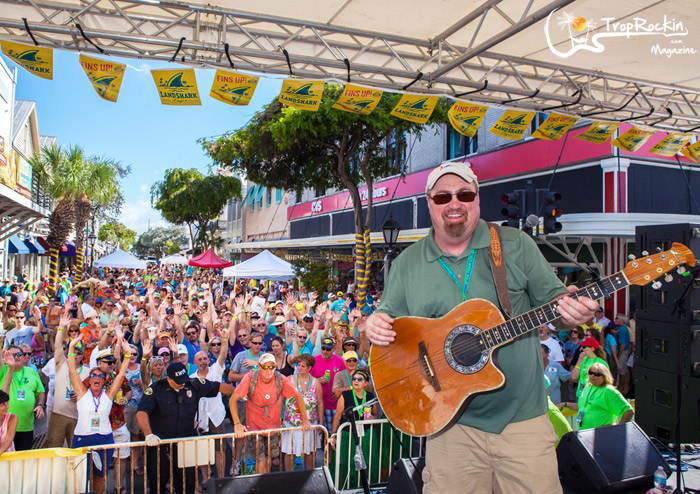 The Margaritaville Street Fest is always a fun stop on Friday afternoons. Margaritaville offers beer and margarita booths, the crowd fills the entire block of Duval, beach balls bounce around and balloon shark fin hats appear from the entertainment stilt walkers. On stage, Don Middlebrook and the Pearl Divers give us reasons to dance in the streets. Don showcases his original Trop Rock songs for the Parrot Head crowd.

Great morning for Mimosas at Smokin’ Tuna and Sarasota PHC Bloody Mary morning party with the Trop Rock Junkies entertaining us. It was also a great day to find your plaque of sponsorship like Karen and Bill Stewart did for The Southernmost Coconut Castaways. Great tail feather shaking time with our West Coast FL phriends. I really enjoyed my bar crawl helping Sarasota PHC, Tampa Bay PHC and Space Coast PHC get their club pictures taken with their new shirts.

Once again the Trop Rock Music Association Awards combines a witty script (thanks to Jim Hoehn), live Trop Rock musical performances and the well deserved recognition for artists and industry professionals. The overwhelming theme of acceptance speeches this year focus on the fans of Trop Rock music. The artists truly appreciate your support in attending gigs, buying CDs and spreading the word about their music.

We caught up with several winners this year and here’s what they had to say:

Don Middlebrook: Sweeping 3 awards this year, Don is recognized for his community service winning the “I Can” Award along with Songwriter of the Year and Album of the Year.

“I was blown away…..album of the year, for me it speaks of all those studio hours put into a project. The extra hours you labor for ideas and quality with technology not always being your friend. Songwriter of the Year, is voted by your peers and is huge for me. So many good writers out there, telling you that your barroom napkins are better then theirs is an honor. The “I Can” award is a bit embarrassing, since there are so many that do so much in the Trop Rock, Parrot Head nation…..I suggest a recount!”

“I feel grateful, overwhelmed, happy and fortunate! I feel like the nominations were a validation and a sign that we were doing something right. To me the awards are one of many gifts that I get back from music, along with the connection with audiences and the friendships I’ve made with the other artists in the genre.”

Howard Livingston: Entertainer of the Year

“Just to be mentioned along side such talented Trop Rock artists is incredible. To win Entertainer of the Year is humbling and I am so grateful. Thanks to all of my friends for listening to da’music.”

“It’s an honor just to be mentioned with the other nominees, and of course an honor to win. So much talent!”

“I (we) are very happy to be awarded Band of the Year again in 2015. For a band who had to work so hard in the beginning to even be accepted as Trop Rock, it’s a very big honor!”

“Thank you to the TRMA’s! It is truly special for us to be recognized for doing what we love to do. It’s a good feeling to know that we”re making a connection with people who we play our music for, and that means a lot!

Dorothy Bedlin / Music on the Bay: Event of the Year

“We are humbled and honored to be named Event of the Year for Music on the Bay 2015. We work together as a team for a year to put on the event and it feels special that the hard work and dedication is recognized.“

“We are honored that our dedicated listeners continue to enjoy all of the great songwriters we feature, both old and new. Thank you to everyone for voting for us again!”

Thom Shepherd / Live from the Redneck Yacht Club: Radio Show of the Year

“What an honor to be recognized for all the hard work I’ve put in to create my radio show.“

“The winners of The Yard are artists that work hard playing their music and traveling all over this country. Fans of the music that choose to come and support the artists are the winners. The payoff of hard work of putting on a house concerts is seeing the joy in faces of those who come.”

“To say that we were surprised to win the Fan of the Year award would be an understatement! We’re just doing something that we love, so we don’t think of it as “hard work.” To see our names added to the previous years’ winners is so exciting! Thank you to all who nominated us.”

It’s no small feat to get up early on Saturday morning of MOTM and run or walk a little over 3 miles, but seven of us from the San Antonio Parrot Head Club did just that. The annual 5K run/ walk raises money for under-insured women or women with no health insurance to cover women’s health needs, such as mammograms. This year, almost 500 joined the effort and Jerry Diaz and Dani Hoy are always in attendance to serenade before and after the race. This is indeed a wonderful example of putting “Party With a Purpose” into practice!

Troppin Around the Island
By Millie Marie Taylor

Saturday’s highlights include an afternoon with the Calypso Nuts and Girlz Rule on the roof top at the Rum Barrel. It is always a wonderful treat to be above the streets and feel the breeze while listening to some terrific tropical music. Kristie Bobal displayed her bottle cap art for purchase and ran the merch table. Next, It was off to see Mr. & Mrs. Thom Shepherd at Smokin’ Tuna for a cool drink and some Texas music. Leaving with Thom’s song “I wasn’t gonna drink today” in my head as I headed over to enjoy Kelly McGuire and Friends poolside at the Lighthouse Court. Latitude, Jack Mosley, Jimi Pappas, Jersey John Haney (played Harmonica along side with guests), Wes Loper and Eric Erdman all came out to play pool side showcasing their talent with a twist of fun.

No planes on Sunday is the lazy last day to give your hugs and toasts at each venue with a promise to see ya soon. I was off to Blue Heaven for Sunny Jim and friends water tower show with my favorite mimosa. It was wonderful to see a lot of the Chicago PHC hanging out under the umbrellas and trees.

What a great opportunity to see Howard Livingston in a smaller, more intimate setting! We paid to see Howie at his brunch show at the Smokin’ Tuna and received a bloody mary and continental breakfast with the price of the ticket. Hearing Howard sing and talk in a relaxed atmosphere was worth more than several times the price tag ($20) and I’d recommend attending this fundraiser to anyone. The money raised helps children with cancer attend summer camp, so the great tunes and laughs all supported a terrific cause.

Closing out the night and the entire MOTM / Trop Rock Music Week is Jim Morris’ annual “No Plane on Sunday” show. There’s always a great, sometimes raucous crowd at Schooner Wharf Bar on Sunday night to close out Meeting of the Minds. Jim Morris and the Big Bamboo Band (all stars in their own right!) put on a wonderful show. Great drinks and food are always available, so the entire evening is a terrific way to say goodbye to Meeting of the Minds.

We’ll see you next year!