Dorothy Bedlin and her Tampa Bay Parrot Head Club (TBPHC) Phlock succeed in delivering phrases like “Party with a Purpose,” “Parrot Heads have Heart” and “ Music feeds the Soul.”

Every year the TBPHC and their Music on the Bay (MOTB) Attendees have raised more then the previous year for the Shriner’s Hospital for Children. This year they are well on their way to topping last years event totals. Parrot Heads and Trop Rock fans from 32 States and Canada gathered for the four day fund raising music fest held on the sandy beach at Whiskey Joe’s. 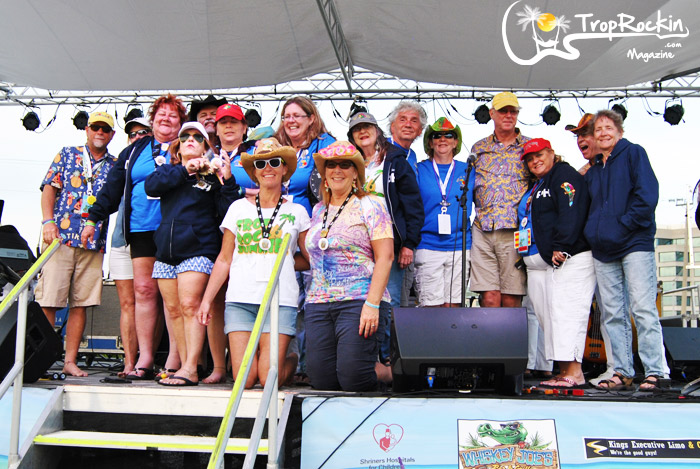 Music on the Bay Team

Early birds who showed up on Wednesday had a chance to sign up and join in on TBPHC Planning Meeting at Whiskey Joe’s to enjoy food and music. Tacos and music by Jeff & The Camaros with a sneak peak of the specialty drinks to be served up during the venue. Blue Chair label showcasing their new Key Lime Cream flavor and how to serve it up in a drink called “Changes in Attitude.”

Thursday night is getting bigger every year with Dorothy Bedlin welcoming everyone to the opening night introducing the head Shriner Potentate James Lich to lead an opening ceremony of thanks for being here. Sunny Jim, John Frinzi and Howie Golub (The Boat Drunks) making their annual appearance showcasing their blended friendships and sounds. Always entertaining listening to the songs, stories and laughter these three can bring to a stage. 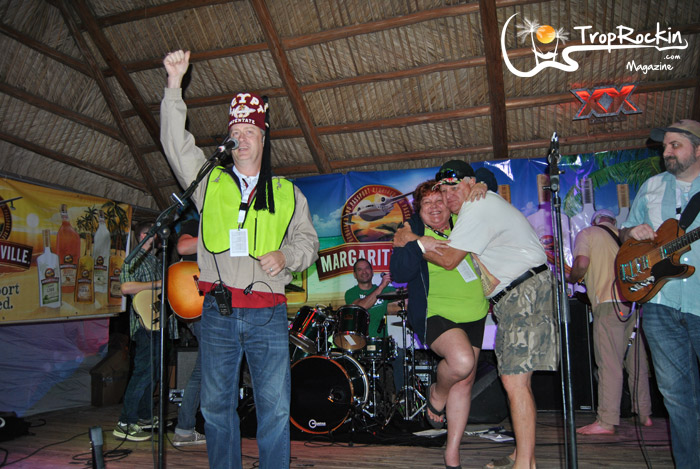 The Bamboozlers took over the stage to close the evening out with a huge successful sound. The Bamboozlers are the former 2004 Cedar Island Band bringing professional sound to the stage as a cover band. They were the topic in many conversations throughout the weekend. They are a big stage act with crowd pleasing music from Trop Rock, Rock, Ska and a twist of sound on some of your favorite sing along songs.

The first 50 registered MOTB guests along with other special guests were invited to a private “VIP Party” hosted by the Tampa Bay PHC. The private party came with music from Rich “Schooner” McGuire and his band members Jimi Camastro, Bill Cockrell, and Rudy Cox. Rich invited a showcase of Phriends which included Bob Banerjee (the violin player from Corned Beef and Curry band), Jim Asbell & several of his Tropiholics, Jimmy Maraventano from Jimmy and the Parrots, the Bamboozlers, Steve Hopper, John Frinzi, Sunny Jim, Howie Golub, The Young Rebel Goombas, Donny Brewer and Mike Connelly. Amazing evening of blended talent and sounds.

Friday was full of memories as past MOTB artists and bands shared the stage in rotation for a full day of entertainment. It was very nice to see Jake Tatar and Andy Gaines (former Boat Drunks members) perform a duo act on the main stage to start the day. Feeling so much sand between your toes as the Deep Eddy stage pushed dance bands from The Young Rebel Goombas and The Southern Drawl band to a closing night with fan favorites Jimmy and The Parrots. 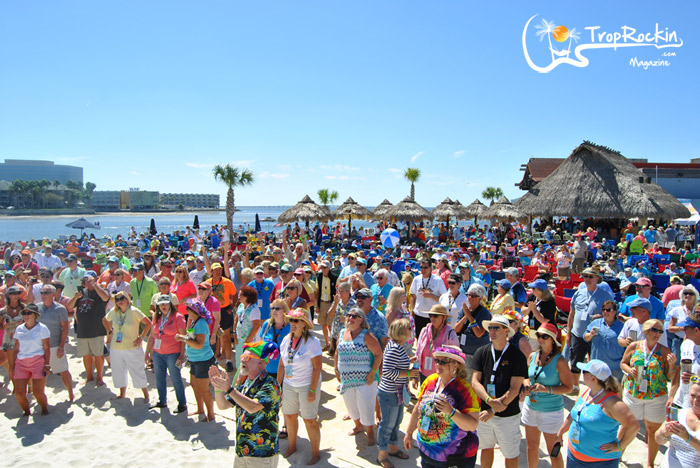 Margaritaville stage had two afternoon performances with Sunny Jim and two later performances with The Bamboozlers. It was during one of Sunny Jim’s performances that the “Monkey’s threw a Party.” MOTB committee worked hard to come up with ways for everyone to have fun and this year Adopt a Monkey with papers all in the name of charity. They sold over 50 adorable sock monkeys with raising $540 going to Shriner’s Children Hospital.

Friday afternoon was a beautiful display of decorated umbrellas strolling down the new rubber walk way on the beach. The sight was so delightful as people stopped in their sandy tracks to observe the colorful umbrella conga line. The mermaids came out to play on the stage in front of Jim Asbell and the Tropiholics allowing people to have a great photo opportunity. Grey Beard collected his 70th Birthday event signs for a special photo. Dorothy Bedlin and the awesome MOTB committee really help you and others lay out a special time at this event all for a donation to the Children. They have really made this a Trop Rock fantasy beach where dreams can come true. Just like at a theme park full of characters, except it’s Trop Rock Artists instead. Friday night was full of friends and Artists everywhere dancing, chatting and just hanging on the beach with everyone.

Saturday morning went Nashville on the Margaritaville stage supporting Thom Shepherd and Coley McCabe with special guest stars like Jesse Rice and Donnie Brewer. So special these Artist are that Mayor Gonzo Mays had to come up from Key West to introduce them. Memories of Jim Morris signs and conversations filled the air as The Big Bamboo Band played on a Saturday and not the traditional Sunday finale. Jim Morris maybe sailing the musical cosmos, but his lyrics will forever be here with his adoring friends and fans at Music on the Bay.

In the raffle tent was a specialty item you could try and win that was made up of Jim Morris shirts donated by Sharon Morris, Julie Peacock and many others. Sharon Leverett gathered the shirts and had a Jim Morris shirt of memories quilt made for a raffle donation. A special Saturday afternoon of remembrance as songs and friends sing along to the lyrics of Jim Morris. 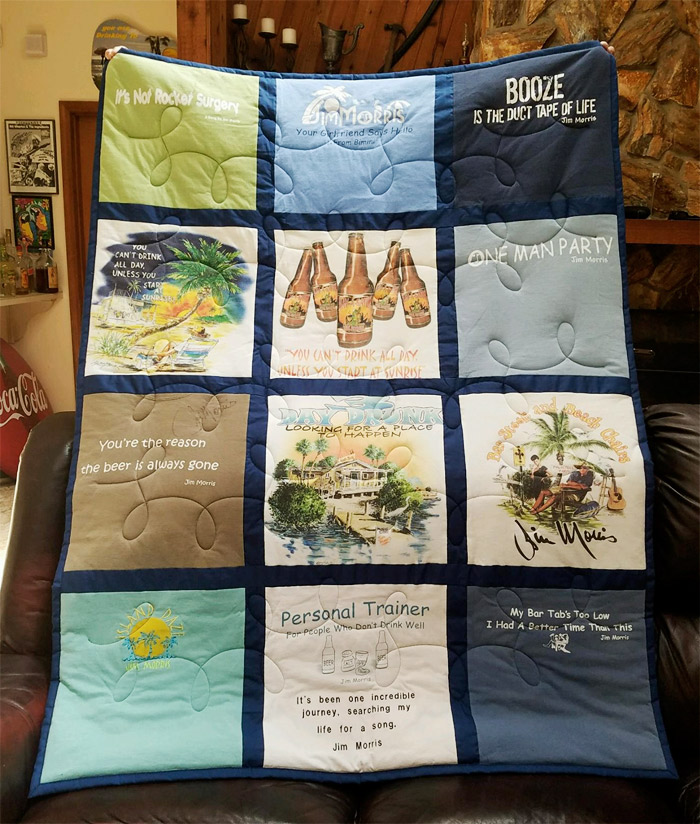 It was time to line up the new attendees for some rue-stirring-time with Bill Wharton the original Sauce Boss. Singing the recipes and other zydeco songs as we all help to cook the gumbo later to be served for a donation with all proceeds going to the Children. New Attendees better known as MOTB Virgins tend to be shy walking up the steps to stir the rue, but look out that gumbo rue has some magic in it when they start stirring, they begin to dance and twirl around. This year the Potentate James Lich helped stir and serve up the chicken and shrimp gumbo. Stuey (cartoon character from Family Guy) and Peanuts the Clown were on hand to have their pictures taken. 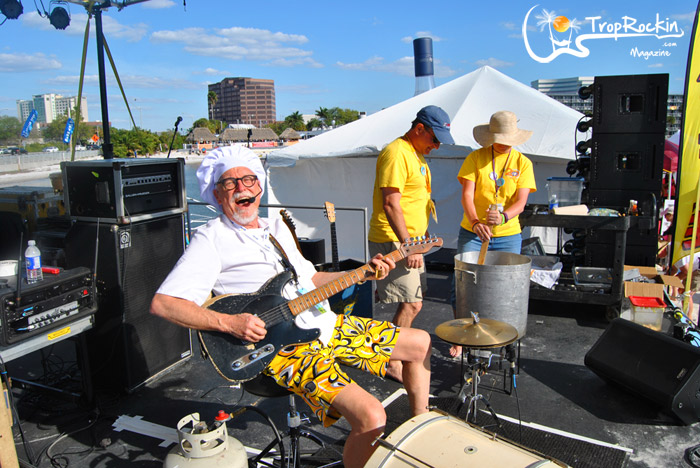 The children were so happy to see everyone as they came down the line donating money, gifts and a special lady named Laura Spink also brings beautiful color lei’s every year to place around their necks. Traditions have been made and set to sand at this event that so many are sharing in on them. The 2nd annual Parrot Head Club with the Most Attendees Club Award went to Charlotte Harbor Parrot Head Club (Linda Harrison excepted the award).

This is an event filled with special things going on and a lot of music. The Boat Drunks and A1A band performed so well you would’ve thought it was all you needed to complete this event. But that would not be the Music On The Bay way to end this event.

Sunday opened up with the last chance to purchase raffle tickets for the Kenny Chesney autographed guitar, Rick & Laura Spinks Built to Last Furniture donation and Steve Hopper and the Wolf Island Band owning the Deep Eddy stage this year. It was truly an epic Sunday morning at Whiskey Joe’s. Jack Mosley carried the crowd away with his classic sailing songs and tribute songs to artists who have sailed on. Jack is an original troubadour you could listen to for hours. 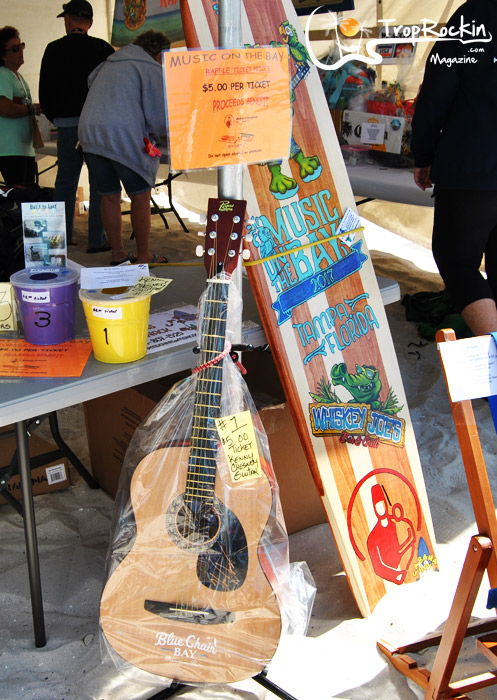 Corned Beef and Curry were simply amazing to dance and listen to. The lead singer plus fiddle/mandolin/guitar player Bob Banerjee has to be my favorite artist this year performing with so many of the artists to bands through out the weekend. Bob proves there has got to be a fiddle in the band and did an amazing job during the whole event.

Steve Tolliver and The Trop Rock Junkies did an awesome job filling the stage with Trop Rockin’ Magazine Gals during his song “Rub it in.” The Trop Rock Junkies were spot on entertaining the crowd as the finale band for the event. It’s always hard to hear the last song at Music on the Bay being played, but I was excited to hear Dorothy Bedlin announce “Registration is open for 2018.”

Dorothy Bedlin has assured me after six years of putting this event on that Music on the Bay is only going to get bigger and better. There was a lot of excitement as folks phlocked to register onsite for MOTB 2018. Dorothy and the TBPHC would love to have you as their guests for the 2018 Music on the Bay Planning Meeting get-together on Wednesday, February 28th.

Stay tuned for online registration to open up and more information for Music on the Bay, March 1st – 4th, 2018.

MOTB just keeps getting better every year!! Had a great time.