Sharkey’s beachfront restaurant opened their doors and beach to over 400 happy sun seeking Parrot Heads at the annual Rendezvous event, hosted by the Panama City Parrot Head Club. Warm sunny days and chilly evenings allowed for games, dancing and night time romancing. Girls Inc. of Bay County is the official charity and their volunteers were always there to assist and help with all kinds of questions. Panama City Parrot Head Club members on deck and the beach helping to make sure you know where your next “License to Chill” raffle area, silent auction and Rendezvous contests are located. 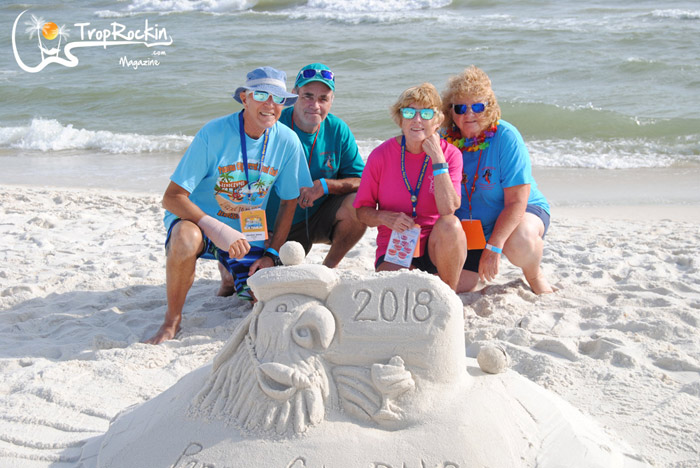 Thursday afternoon gave us a chance to mingle, say hello and join the Panama City Parrot Head Club the revolving, reloading, conga goodie bag stuffing line. Reminders about the crazy hat contest, jell-o shot tasting contest and a favorite boat drink tasting contest had us excited. These are the best fundraiser ideas ever, along side basket raffles and silent auctions.

This little venue had a big showing in all categories of their fund raising departments. The keep-one-hand-in-a-pocket and catch the monkey on a hook with the other hand team game was not only fun, but a huge participation attraction for the attendees. Learning of the “Best Drink” contest encouraged Trop Rockin’ Magazines very own Tammy Camp to partake in this charity fund raiser for a chance to be a Judge of about 30 entrees.

Quick easy room check-in and parking pass placing on the rear-view mirror set us off to stroll on over to a Rendezvous Happy Hour. This welcoming happy hour came with so much entertainment from Jeff and The Camaros. I never thought you could have so many props, characters and personalities on one stage. A Jeff Brewer performance is truly a wacky musical fun house. We not only saw Santa, but we danced with Santa to a Christmas song. “Elvis – Elvis is alive” was being said throughout the crowd as Elvis walked on stage to perform his famous dance moves and posses to Jeff’s music for a photo show. Mustache mania is a staple prop for Jeff and the Camaros. There was no shortage of stash wearing attendees, Artists such as Steve Hopper, Steve Tolliver, Larry Dunsmore, JD Edge, Paul Wray and Drop Dead Dangerous all joined Jeff on stage sporting their stashes in Sharkey’s. Funny folks also used the mustaches as a beautiful unibrow.

A full happy hour of fun and indulgency dancing with parrot head spirits. There was free range dancing and some high step kickers having a great time. Closing out the evening of mischief with Jeff and the Camaros was country performers Drop Dead Dangerous Kitty Steadman, Melonie Howe with special guests from the Southern Drawl Band- JD Edge, Paul Wray and Larry Dunsmore. Drop your flip-flops and grab your boots for the foot stomping sound this group pumps out. Only thing that slowed down this bang out southern sound was a duet with Donnie Brewer. Drop Dead Dangrous has been bringing their own twist to southern rock with a taste of country blended up and served their way.

Friday brought us the best of Trop Rock with a day of Barefoot Reggie Starrett performing three sets on the Sharkey’s deck stage (3 sets of Barefoot Reggie is never enough). Barefoot Reggie’s last set was extended and Sharkey’s kept the beach bar open just a little longer while the manager brought us out bowls of hot fresh French fries. The daily beach stage was full of Trop Rock legends who have helped us parrot heads look good dancing like beach people pros. Tropics of Tennessee Steve Hopper and the Wolf Island Band had us singing and swaying to the songs of his new CD “ Anywhere There’s a Beach.” A moment for one of my favorite songs “Misfit Town’” in a town I use to reside in was a memorable moment for me. “Lazy Sway of the Palm Trees” was a particular crowd pleaser.

Excellent performance and song line up had the afternooners waking up to some real vacation beach music. Mid afternoon and into a beautiful sunset was the original Trop Rock Junkies with Steve Tolliver leading this band of merry men into many years of original music and classic beach dancing. Pulling out a favorite classic “Caribbean One,” which was the name of his plane brought out the “O- O”s . Steve Tolliver has already put out a public sound apology during their performance, but it did not stop beach dancers and sun bathers from singing along. When you have as many trop rock songs and years as Steve has in this genre, folks just know your music by heart and big speakers can be excused for not caring the sound. Trop Rock Junkies performance was spot on with their tropical attire, original Greg Sabol custom hats and Iowa Rock’n Roll Hall of Famed drummer Steve Way. Talent is all this band has to put on a resume with a notation in Hobbies: Professional Musicians.

Sunset end of the sun poem, conch blowing lead by Dale Hench and a cannon bang helped finish out the Trop Rock Junkies performance. The beach stage introduced the iconic “Texas Beach” music master Jerry Diaz and Hanna’s Reef for the evening entertainment. “Beach People”, “We’ll Get By” and “Let the good times roll” are legendary songs Jerry performs with his band of talented artists/musicians that really heat the crowd up. Jerry has some of the best musicians in his band performing with him. Some of the band members such as Trey Newmiller drummer for several bands including Donnie Brewer & the Dock Rockers, Bassist Nick Montour band “Dub Habitz” new reggae infused instrumental CD just released “Dreaming about Tomorrow” and Mark Mireles is the Texas Pan Man with a voice he uses in his solo CDs, band “Tropicats” CDs and he too performs with other bands.

A beautiful Saturday morning welcome to Panama City by Mayor Mike Thomas was also a stage stunning moment as he shook Jack Mosley’s hand and replied to him “welcome home”. Mayor Thomas then did a nice Thank you all for coming – Enjoy our beaches and I don’t handout get out of jail free cards- but we may can work something out. Mayor Thomas ended his welcome speech with a grateful appreciation to all attendees for coming to enjoy Panama City and it’s beautiful beaches.

Trop Rocks best Story Telling Artists performed in Saturdays line-up. Jack Mosley continued a beach stage performance which started at 10 am in the morning. Jack Mosley fans really enjoyed the humorous comments made “who did I piss off to get this early slot, I really owe them an apology” and the crowd favorite “glad to see so many friends and fans I know out there get up this early to hear me.” Jack Mosley is normally a late afternoon or evening performer giving his songs to the sea, ocean and tequila happy hours. I found it very refreshing waking up to a Jack Mosley morning. Not sure if I will ever see that happen again, but I can check off Bloody Mary morning with Jack Mosley off my bucket list. Jack carried the beach stage with his power house of songs and vocals only he can pull off. Jack Mosley is a storyteller extraordinaire so this performance included stories of his childhood and life growing up in Panama City.

Winn Dixie famed comical singer/songwriter Matt Hoggatt had the triple play deck stage. Matt not only gave us a break from the sun, he gave us a show of laughter and pure entertain only a man with his face on a can of Winn Dixie chili can. Matt is a storyteller/songwriter who will lead you into his songs with some of the funniest stories you have ever heard. All three performances by Matt were spectacular moments of musical laughter. Redneck stories have nothing on Matt’s daily life at his local Piggly Wiggly or Winn Dixie. Hometown humor with a country song to boot is Matt Hoggatt brings with his talent.

Jump up for a Texas Teaching duo crowd pleaser (no matter where they are) The Detentions. School Teachers giving us almost three hours of the best Detention time in our lives. Their beach song “Ft. Meyers” was a real crowd pleaser. Who would ever think a gin drinking song would find it’s way in a song and on the lips of attendees as Chris and Dan sang “Salty Dog”. Beach bartender Cory said “I can make that” as the orders came in. Storytelling is a gift The Detentions have being teachers and tourists. School janitor room songwriting to meeting in a school bathroom is just enough to prove they have stories of innocence. Island tourists who have literally drank up all the beer and wrote about it. These two mild manner planted Texans leave no good phrase alone when it belongs in a song. 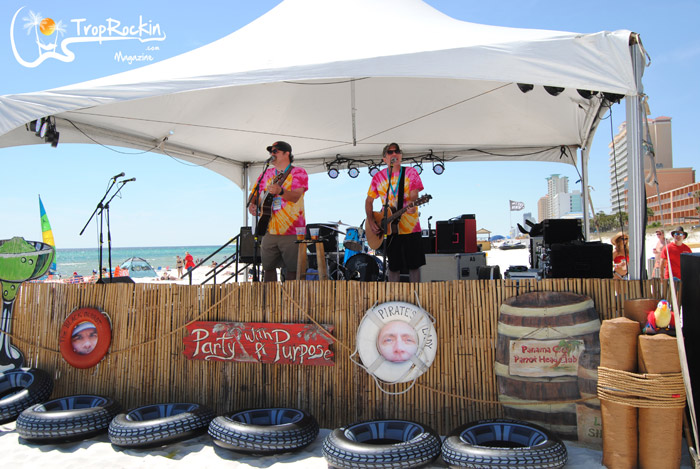 Native Texan storyteller/singer/songwriter/musician/master photo bomber Donny Brewer and The Dock Rockers took the beach stage sharing everything on a Big Beach stage it could handle. Donny invited multiple artists up to sing co-written songs or just songs he loves to perform by that artist. Donny shared the stage with a very special guest performance by his son Shea Brewer. Panama City Beach just got double “Brewerized”. A true Donny performance brings out conga lines, in the audience performance and colorful music to enjoy in the sand.

Long time Trop Rock singer/songwriter and storyteller with a little hot sauce is Jimmy Parrish and the Waves. Jimmy had the evening cool breeze and cold temps trying to cool down their performance. Sailing, hot sauce and a tropical hat with a mix of Florida Rock is what this band served us on the beach. Jimmy is a native Floridian with 30 plus years under his Trop Rock belt. Singing a vast variety of his crowd favorites to a bundled up audience is just apart of bringing the stage to life. Having a rock inspired band finish out a beautiful afternoon on the beach was just what we needed to stay warm.

Sunday on the Sharkey’s deck was a perfect lunch afternoon with Brent Burns. Brent can do his share of storytelling and songwriting with all his years of professional experience. Brent brings a familiar Gulf lifestyle of living in a biannual beach town, experienced comedy and southern charm into his songwriting. Brent has told us the stories behind the songs he sings about every time we see him, but I never tire of hearing them. Brent is always off on some new adventure somewhere and sharing the stories with his songs is what he does best. A country closeout performance by Thom Shepherd and Coley McCabe was just what a Sharkey’s afternoon needed. For the attendees that planned their Rendezvous vacation with an extra night stay were able to enjoy the duo performance.

While saying bye to Jeff Brewer he reminded us the website will be updated soon and 2019 Registration is ready for you. Do not keep this event on your bucket list. Book as soon as you can.
Rendezvous is a true sand in your toes tropical vacation. For a LIMITED TIME Register NOW for only $70 until June 1st when it goes up to $80.