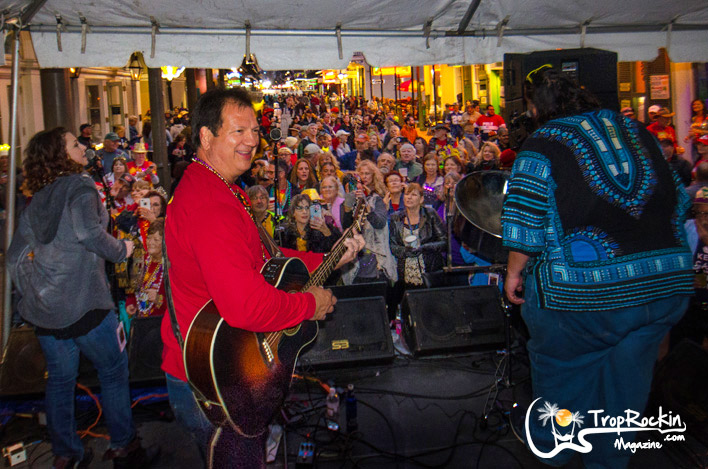 In mid-January Trop Rock fans headed to New Orleans for the 22nd annual Pardi Gras festival. Four days of original music and unique fan experiences are the cornerstones of this successful event. Hosted by Jerry and Mary Diaz along with great support from Earl Bernhardt and Pam Fortner, owners of Tropical Isle, the main hub for Pardi Gras.

Luckily, I’ve attended Pardi Gras quite a few times over years and I enjoy how it’s never the same. This year, the lineup included an impressive variety of singer/songwriters giving attendees a range of music styles to sample and lively band performances to keep the event energy going strong.

There were several artists who were new to the Pardi Gras lineup this year. Notably, Eric Erdman, Bill Whyte and The Jonas Lorence Band. All three are vastly different, yet fit perfectly in with the Parrot Head / Trop Rock crowd.

Eric Erdman’s performance set the mood for the comedy theme that takes over on the last afternoon of Pardi Gras. His Alabama sound, rich voice and engaging storytelling is a treat to experience. With Eric’s humor weaved into his songs, the laughter lasted through out his entire show. 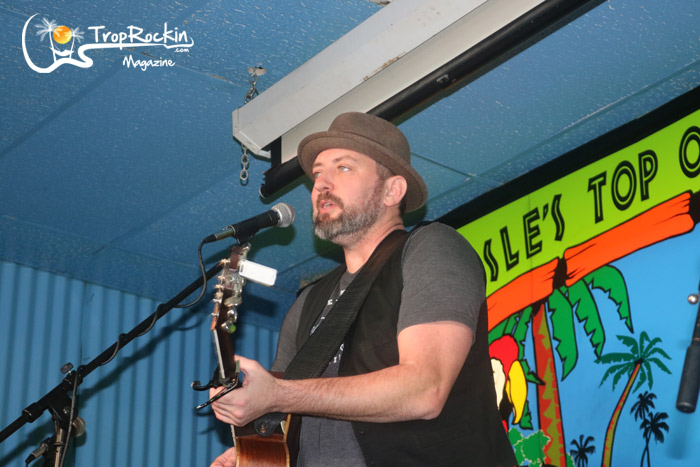 Bill Whyte joined in this year on the annual Pirate’s and Poets Songwriter’s Showcase. Sitting between Brent Burns and Matt Hoggatt, Bill held his own against two of Trop Rock’s funnier talents. It was fun to see Brent and Bill make a duo out of their co-written song “I’m Going Ugly Early Tonight.”

In this “Fools on Stools” style show, the zingers scoreboard actually favored Brent and Matt. Honestly, with Bill’s entire career focused on country music, broadcasting and comedy, I thought he might crush them! It actually was quite close between the three, but the score keeper (Donny Brewer) wasn’t totally reliable. 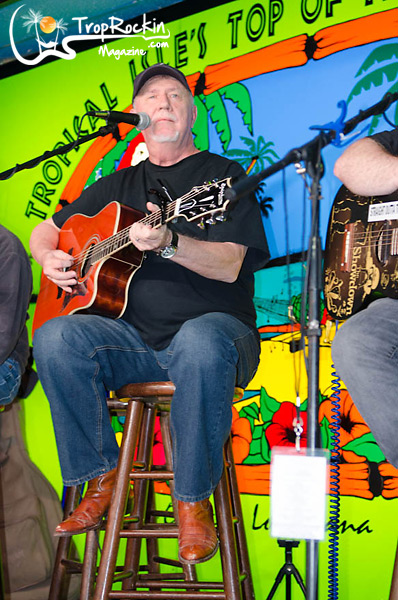 Jonas Lorence shined during his first Pardi Gras performance on Friday morning at Tropical Isle. Jonas is a newer artist to the Trop Rock genre, but certainly not to music. He donned a sombrero and gave the crowd an enthusiastic early show.

A prolific guitarist, Jonas snaked through the crowd at Tropical Isle during a dynamic guitar solo. He even gave out a few hugs. Now that takes talent! His Trop Rock lyrics are spot on for an island escape and his songs have quite the diverse sound, from country to classic rock. Jonas made quite a few new fans at Pardi Gras and I’m pretty sure he had a great time joining in on The Detentions gig, jamming at the All-Star Jam on Saturday night and performing with all the artists on the final songs at the Pradi Gras Street Fest.

It’s a jam packed day of costumes, music, drinking, bead throwing, walking through the French Quarter (twice!) and attendees who have the guts getting on stage to act out their favorite songs.

All three are a must-do activity, unless you want to see Jim Hoehn’s performance which is at the same time as the Pub Crawl. My solution to this problem is to alternate every other year. And this year, it was the Pub Crawl!

The Pardi Gras theme was “House of the Rising Sun” and attendees did not disappoint in showing off their vintage style “ladies and gents of the evening” costumes. We were led by Trop Rock artist Robbie Meade who was having a lot of fun directing the group with a bullhorn.

A marching band and a police escort led Pardi Gras revelers through the French Quarter. Throwing beads to on lookers as they spilled out from the bars to see what was going on.

The King and Queen of Pardi Gras, Plugga and Lona Gross, along with the royalty from the past wore their crowns and waved to crowds. From elaborate costumes to simple t-shirts, everyone was in Pardi Gras spirit. Dancing with friends and waving signs. It’s a colorful phlock to watch.

My favorite contestant was Danielle Diaz. She portrayed a fantastic rendition of Jim Hoehn. She knew all the words to Jim’s song, “Kings of Black Velvet.” Jerry Diaz played the part of Jesus and looked just dashing in a huge beard and Jon Burns boogied in a velvety black jacket as “Elvis.”

Melissa Donor, Mike Nash’s better half, killed it with her performance of the 80’s hip hop song, “Ice Ice Baby.” Jeanette Gowen was certainly the bravest. She performed all by herself and lip synched her heart out. The Pardi Gras Kings and Queens were the most disorderly group attempting to dance on the small stage which made their act even more funny.

The Lip Sync Battle winner was none other than Trop Rocker Rick Lamb. His performance was a shocker. I don’t think anyone could have anticipated the hilarity Rick would bring to the Battle. Lip synching the song “Feelin’ Alright,” Rick won the judges over with his imitation of the wild and spastic dance moves of Joe Cocker.

The heart of the festival is the music. Starting on Thursday afternoon and ending on Sunday evening, attendees follow the music to various stages on Bourbon Street. With so many of the artists staying for the entire festival, spontaneous musical collaborations occur frequently to the delight of the artist and fans. 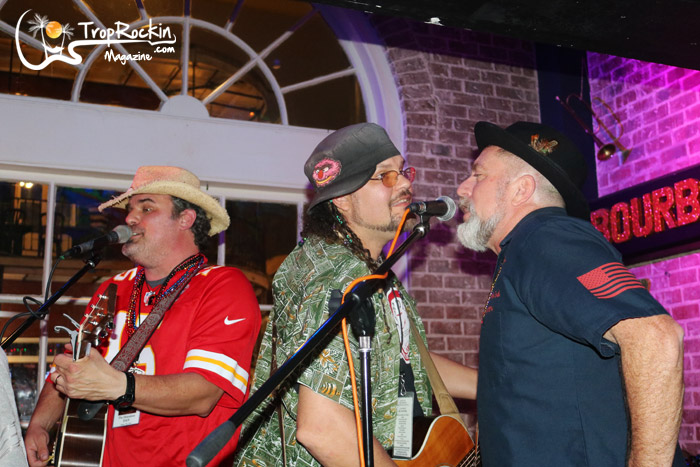 The Detentions put on an energetic show at the Bourbon O and jumping in to have some fun with them was Donny Brewer and Jonas Lorence. Steve Hopper sat in on Rhythm & Rain’s evening gig at Tropical Isle. Drop Dead Dangerous in to perform along with Eric Erdman on Sunday morning.

Jimmy Maraventano’s show was a showcase in itself. Rob Hill, Robbie Meade, Rick Lamb, Donny Brewer and the list goes on. Might be easier to say who didn’t share the stage with Jimmy!

Reggie Starrett orchestrated a surprise during Donny Brewer’s gig by joining in from atop the bar halfway across the room. Of course, Donny wasn’t about to miss the chance to perform from atop the bar, so he made his way over to Reggie.

And there were many more of these impromptu moments just adding more magic to Pardi Gras. 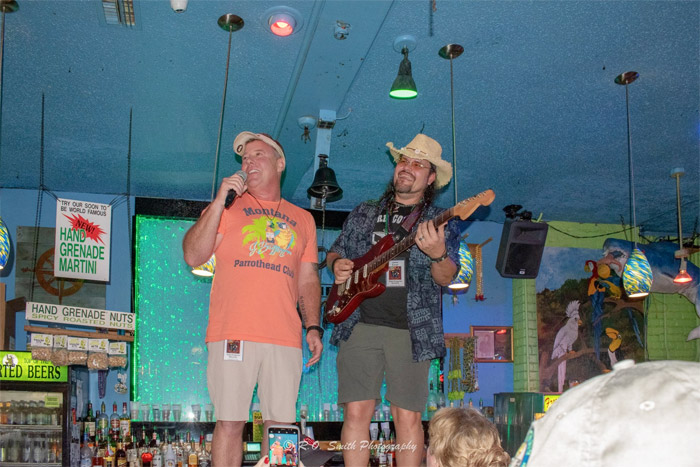 The biggest collaboration of musicians happens at the Pardi Gras Street Fest on Saturday. The three main acts for the day were Drop Dead Dangerous Loaded, The Boat Drunks and the host of Pardi Gras, Jerry Diaz & Hanna’s Reef.

The mix of artists is almost a continuous stream with everyone on ending up on stage for the finale. It’s coordinated chaos and exciting each time another artist joins the mix.

During the break between bands is the annual live charity auction to support the New Orleans Musician’s Clinic, Cops 8, Angelman Syndrome Foundation, and the Humane Society.

As you can imagine (or hopefully you were there), the Street Fest was the highlight of Pardi Gras.

Here’s a look at most of the artists who performed at Pardi Gras this year.

We all come to Pardi Gras for the music, it’s what holds our fun loving community together.

The bonus is sharing the music with friends, being part of new experiences and making memories on our expeditions up and down Bourbon Street.

See you next year!