I have to admit that I’m biased. Pardi Gras is most definitely my favorite Trop Rock event. Yes, it’s in the middle of January and there have been a few years when it’s been chilly. In 2012, my husband wore his ski gear on the first night, but by the Saturday Street Party, it was just fine. Weather aside, this is the annual Trop Rock event that embodies the feel of family. Trop Rock family. Of course, the event is put on by the Jerry Diaz family, so it makes sense. This was Pardi Gras’s 23rd year and it certainly didn’t disappoint.

We started the first day of music, Thursday, at the Orleans Grapevine and amid throngs of hugs and greetings friends, heard T.J. Walsh sing some fine music in the courtyard. This is always a fun time with yummy things to sample from Margaritaville Pirates and Poets conducted their annual Radio Show at the Tropical Isle Bar (the Pardi Gras epicenter). If I refer to the “Top of the Trop,” you’ll know it’s the second floor. 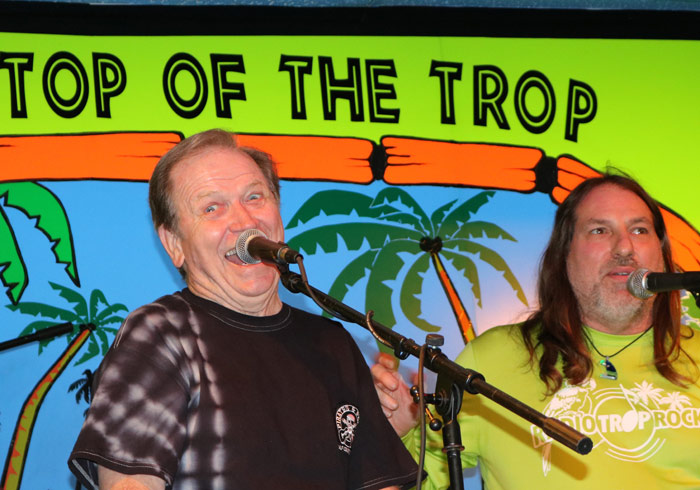 I was snapping some photos when I felt a tug on my blouse. Turning around, I realized it was Pam Fortner. Many of you know she and Earl Bernhardt started the chain of Tropical Isles, invented the Hand Grenade drink, and own the Orleans Grapevine. We lost Earl last December and it was a blow to many, Pam included. Everyone was so delighted to see her throughout the weekend, however.

Later in the afternoon, Mark Carson entertained, and Joe Bennett performed to a large, welcoming crowd. It was super to see him perform again. The crowd made their way to the Tropical Isle to hear Joel Thomas sing and it was Joel’s first time to play Pardi Gras. Mike Nash put on a great show next and the audience was packed at the Top of the Trop. 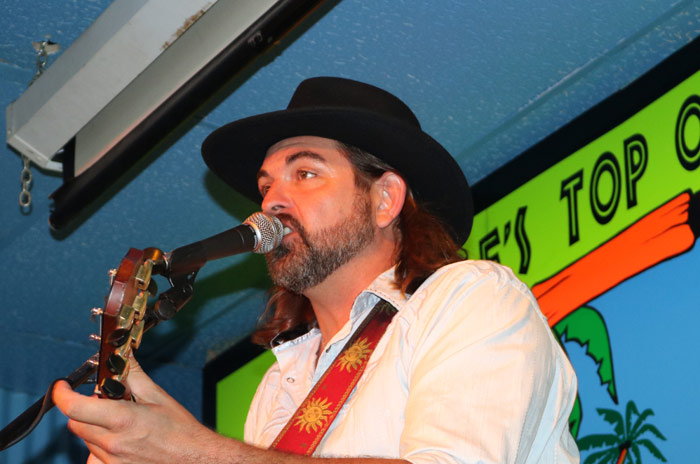 You could practically cut the anticipation with a knife after Mike finished, as it was then time for the crowning of the King and Queen of Pardi Gras. The area in front of the stage was filled with former Kings and Queens, most proudly wearing their crowns and tiaras.

The large group of attendees from San Antonio was thrilled when the newest royalty was announced. “Cooler” Dave and Sally Spenny of San Antonio were crowned the 2020 King and Queen and there wasn’t a more deserving couple around, in my opinion. Music eventually started again, this time with Rick Lamb and the Phin Addicts wowing the crowd. 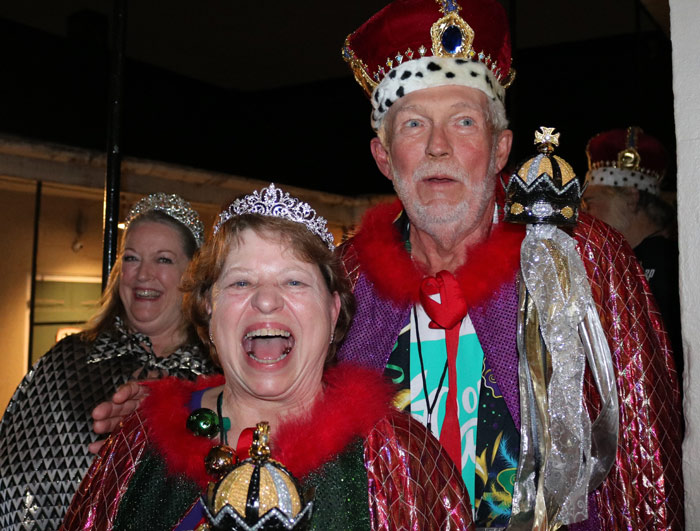 Friday morning dawned with more music in store. The Tropical Isle was rocking that morning as the Copa Reefers, from Oklahoma sang a great set. The crowd swayed across the street to the Bourbon O Bar in the host hotel, the Bourbon Orleans.

First up was Kelly Brown, then came Jeff and the Camaros (his fans!), followed by Bert Hebert and Bob Durand. Each act had a slightly different flavor of audience and they all gave great shows. A couple of blocks down Bourbon Street is a smaller Tropical Isle with the stage right behind the bar. Danny Rosado sang and connected with the crowd there, followed by perennial favorite Jim Hoehn. Rob Hill crooned in the Bayou Club next door, but back to Jim in a sec….. 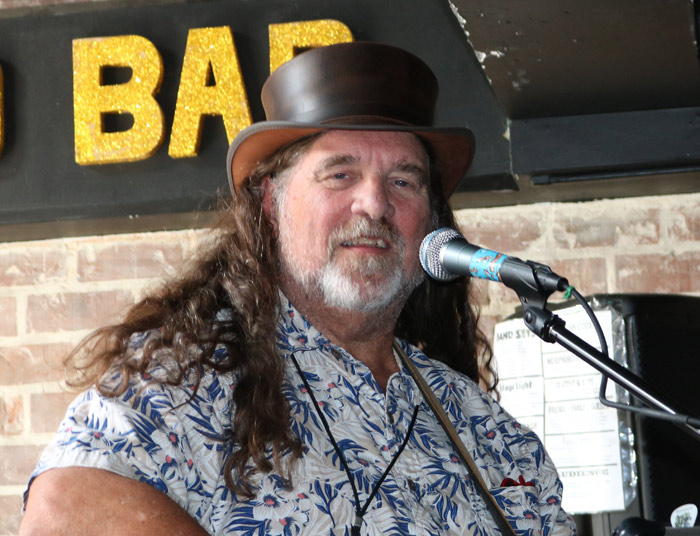 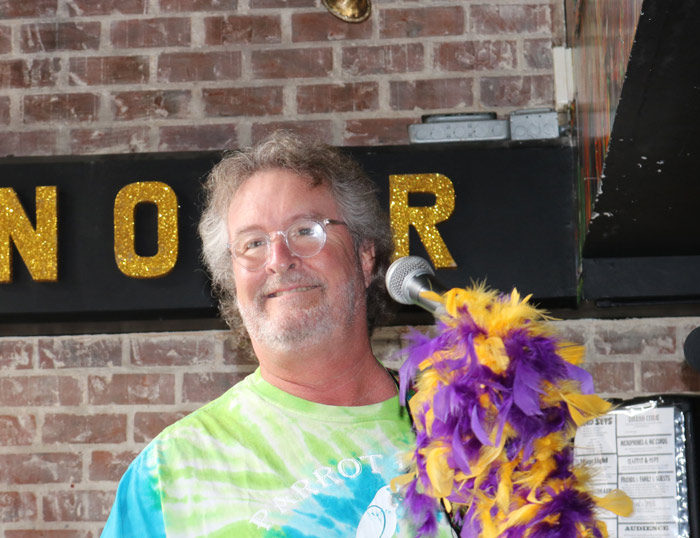 Most of the Pardi Gras attendees look forward to the annual Pub Crawl down Bourbon Street with much anticipation. Many groups dress up according to the Pardi Gras theme, so there were a host of flappers and gangsters about, paying homage to this year’s theme, “Speakeasy in the Big Easy.”

Tourists and locals seem to enjoy our herd pouring into various drinking establishments and I always stop in to hear Jim Hoehn on the way back to the hotel. Jim’s songs don’t wax long about beaches and tropical escapism, but they always tell interesting and entertaining stories. 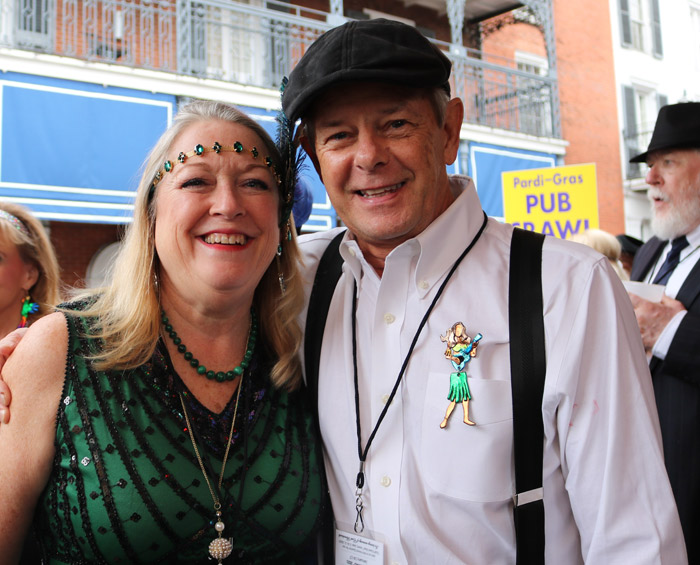 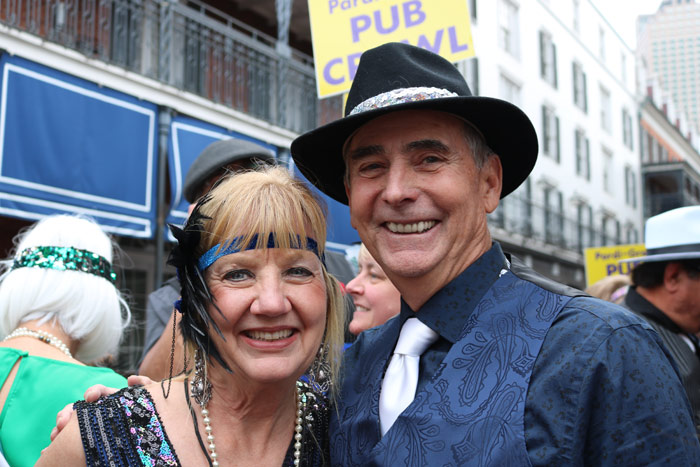 After changing back to look like we belonged in 2020 instead of 1920, Don Middlebrook thrilled the crowd back at the original Tropical Isle. The last act of the evening was Steve Hopper and the Wolf Island band, which was a crowd pleaser, for sure. A few folks remained late to take part in the Trop Rock Lip Sync Battle, which is always entertaining.

Saturday morning found James “Sunny Jim” White at the Tropical Isle and he always puts on a wonderful show. Upstairs on the Tropical Isle balcony, the Big Burrito Radio show was in full force. At noon, the crowd swelled into the street to enjoy the annual Street Party. Erect a stage in the middle of Bourbon Street, add fabulous music and the folks show up in droves. Include a few Pardi Gras attendees throwing beads from the hotel balconies and you have almost six hours of the best show in the French Quarter. 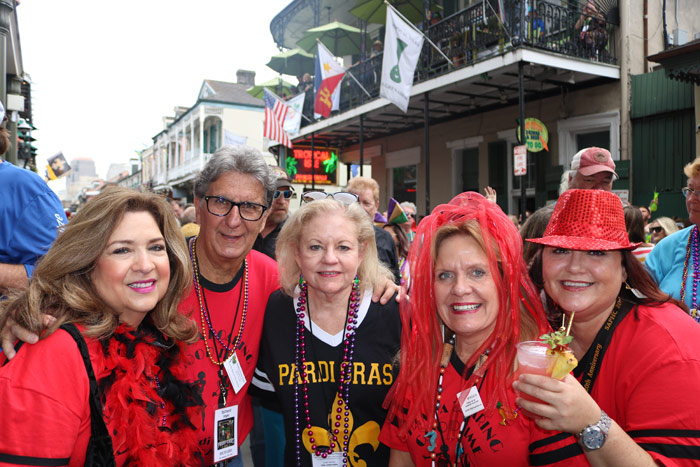 Thom Shepherd and Coley McCabe started the party, followed by Donny Brewer and the Dock Rockers. Jerry Diaz and Hannah’s Reef always closes the Street Party with their Texas Beach Music and before it ended, the biggest Trop Rock Family time happened.

Most all the musicians who have played Pardi Gras take the stage with Jerry at the end and they sing a couple of crowd favorites. I always experience that musical love that emanates from the stage. What a wonderful musical family to which we belong! 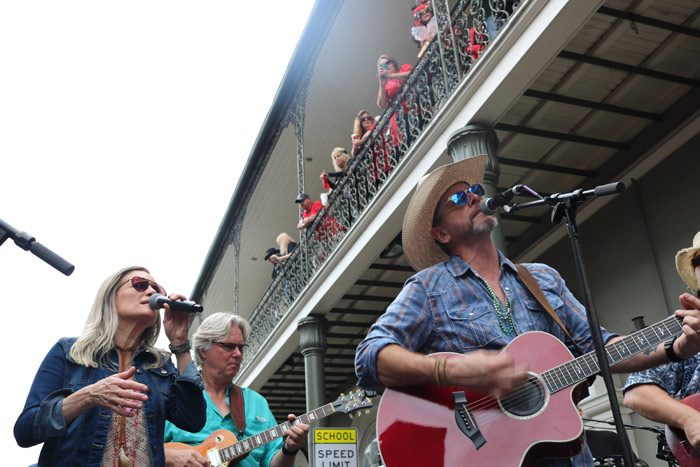 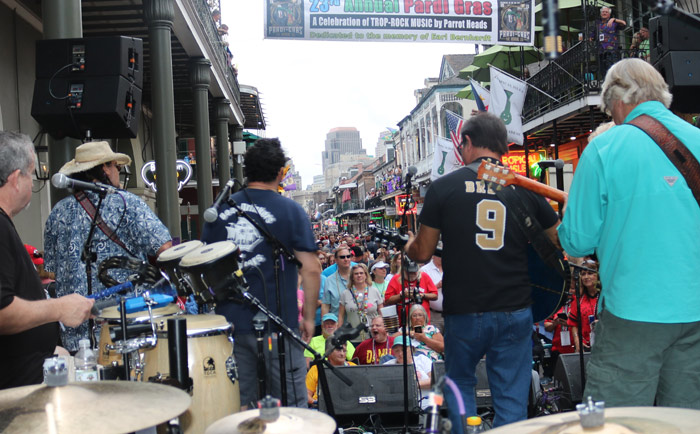 There was a much-needed dinner break before the music started up again. Cory Young and Ty Thurman, who call themselves the Bullawayos, performed before the big evening event, the All-Star Jam happened at the Top of the Trop. Exhaustion begins to set in for attendees who try to catch all the music, but it’s all so wonderful that it’s hard to break away for food and rest.

Sunday morning, we finally heard the very talented Mark Mireles perform solo at the Tropical Isle and he traded his usual steel pan for a guitar and serenaded the crowd. Everyone loves The Detentions and they packed them in upstairs afterward. The final official event was the Songwriters’ Showcase, featuring Brent Burns, Reggie Starrett and Matt Hoggatt. 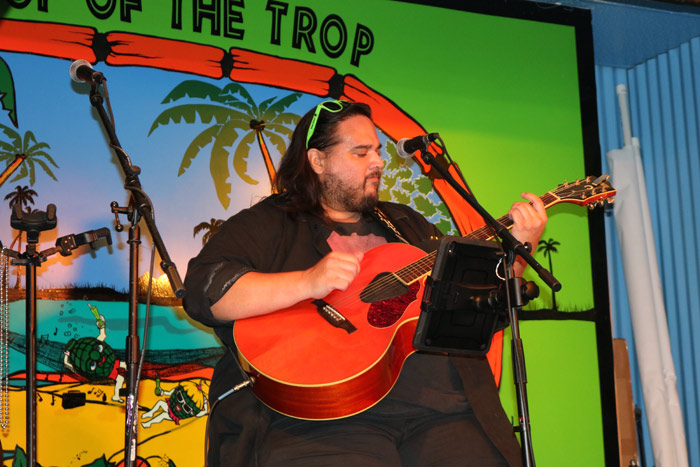 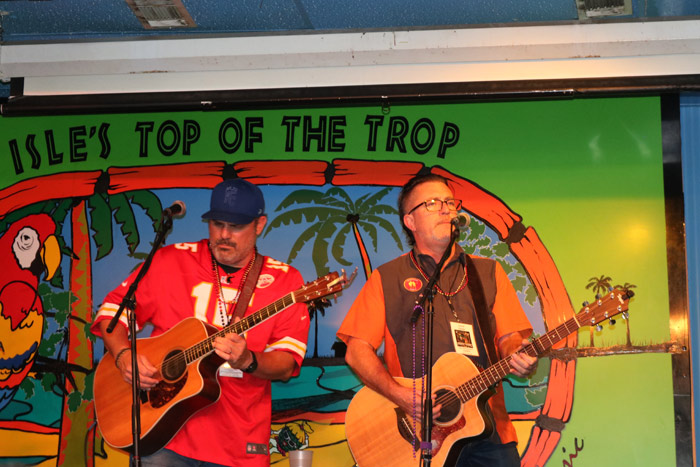 We now don’t return home until Monday, specifically to see this hysterical show on Sunday afternoon every year. It’s the best of Trop Rock music and comedy. Following this, everyone headed downstairs to listen to “Rhythm and Rain” for a while before taking off those credentials to prepare for traveling back to home and reality soon.

If you haven’t yet attended Pardi Gras, you certainly shouldn’t wait and let another pass by. Four days of superb music in a city that has such a rich history, wonderful food and around the clock party atmosphere shouldn’t be missed. I look forward to seeing you at Pardi Gras next year!