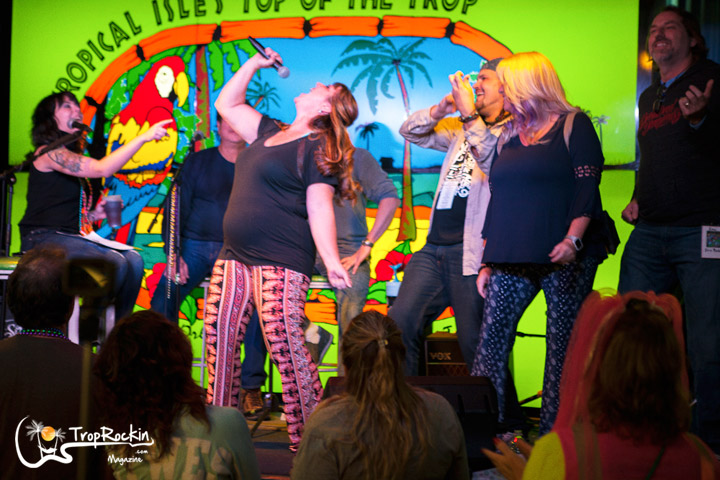 Friday of the 21st Annual Pardi Gras in New Orleans was all about participation in various events by the participants. This would entail the ever-popular Pub Crawl, the new twist on the Parade and the first annual lip sync contest. Typical of Pardi Gras attendees, the events were lively, colorful and always a super time!

This year’s Pub Crawl took the Pardi Gras group on a bit of a different route than in the past, but the new bars we visited enjoyed the spontaneous burst of energy and fun that happens when Parrot Heads drop in for a visit. No matter what the venue, when the Pardi Gras folks arrive with feathers, glitter and Pardi Gras themed costumes, the takeover begins.

This year’s event theme was “Saluting Our First Responders” and one group sported bright pink safety vests, pink hard hats decorated with first responder symbols and pink tutus! Many others donned firefighter hats and accessories. No matter what the theme, Bourbon Street knows when it’s Pardi Gras Pub Crawl time! The bar’s liquor sales spike in that short amount of time, and the bar stages are often inundated with our own Pub Crawlers in costume, dancing with the Master Gator, who is the annual mascot of Pardi Gras, of course!

A bit of down time was enjoyed with more live Trop Rock music before it was time to start the annual parade. This year, the parade was re-invented with an authentic second line band that led our lively group. The spirit (or should that be spirits?) was high among the parade walkers, who followed the second line band and tossed strands of beads to the waiting crowds along the sidewalks.

Pedi Cabs joined the fun this year, also, as an alternative to walking. In typical Parrot Head fashion, many of the Pedi Cabs were decorated and became mini-floats! This event is always one that sets Pardi Gras apart from other Trop Rock music events…parading through the streets of New Orleans’ French Quarter is so unique and always a blast!

To top off Friday’s day and evening of festivities, there was a new late night event at the Top of the Trop (Tropical Isle) that was innovative and fun. The first annual Trop Rock Lip Sync Battle was held and the best part of it was that it was open to fans. About 7-8 acts competed with a favorite Trop Rock song and in addition to knowing those lyrics, a couple of acts had an assortment of props to add to the show.

Emceed by Donny Brewer along with celebrity judges which included Kitty Steadman, Jerry Diaz and Jimmy Maraventano. Each judge gave the performing act a review with a hilariously complicated scoring scale. The winning act belonged to Trop Rockin’ Magazine’s  “Trop Rockin’ Gals,” as they channeled Dan Sullivan and Chris Hillier of The Detentions and performed “Salty Dog.” Making the judges a drink as you perform can reap benefits!

Pardi Gras Friday was all about attendee/ fan involvement and that’s a major reason that this event is so very special. Thanks so much to Jerry and Mary Diaz for continuing to make this weekend special in New Orleans every year. I wouldn’t miss it!

—> Check out part one of our Pardi Gras recap all about the Sounds of Trop Rock Showcased at Pardi Gras!