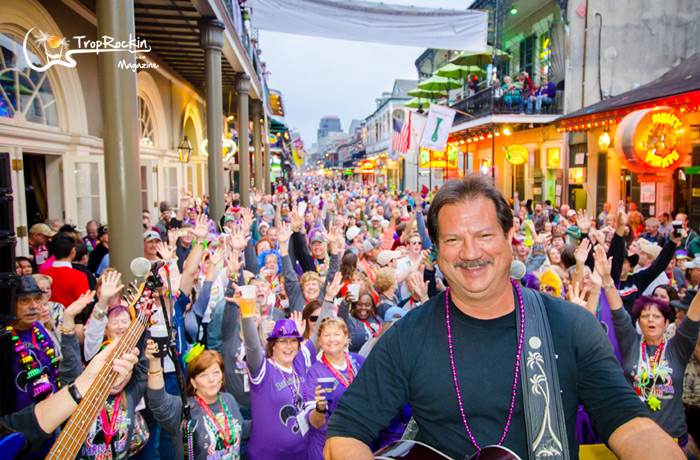 What makes Pardi Gras such a favorite among Trop Rock music and Parrot Head festivals? It’s the unique events within the event.

On top of it all, Pardi Gras brings in over 20 musical acts creating a stellar lineup of Trop Rock talent.

The Friday afternoon pub crawl consists of a few hundred friends traveling from bar to bar down Bourbon Street with (way too many) 3 for 1 drink specials! The secret here is to find friends who love the same beverage and buddy up on drinks. Then dance, sing and block Bourbon Street traffic.

Each year, Pardi Gras creates a new theme for attendees to embrace and this years theme, Vampires of the Vieux Carré (French Quarter) gave attendees the opportunity to create their very own vampire inspired costumes. With great flare, the largest coordinated group, San Antonio Parrot Head Club, members showed off their elaborate costumes.

Quite the event this year for Suzanne Calhoun and Jennifer Martin. Excited about the new marriage laws in the United States, Suzanne proposed to Jennifer on Thursday evening. Little did they know, just a few hours later they would be crowned the Queens of Pardi Gras! Suzanne and Jennifer are long-time Parrot Heads and steadfast supporters of Jerry and Mary Diaz (Pardi Gras hosts) and are a well deserving couple to reign over Pardi Gras 2016.

Friday night is all about the floats, costumes, marching band and throwing beads to onlookers as Pardi Gras makes its way through the French Quarter. The newly crowned Queens ride the first float, greeting all the Bourbon Street patrons who line the streets jumping for beads.

With all the great events during Pardi Gras, the backbone of the event is the incredible music lineup. Jerry Diaz and Hanna’s Reef, Southern Drawl Band, Jimmy Maraventano, Bob Karwin, Thom Shepherd, Don Middlebrook, and Dennis Davis are some of the top Trop Rock artists who entertained over the four day festival.

New comers this year,  The Detentions (an Austin based duo) and Donny Brewer (solo Trop Rock artist) seemed to be everywhere. Jamming with other artists and jumping in on all the showcases, the these three artist were full of energy.

Check out the 3 of them singing “Fishing on Credit,” a song written by Donny Brewer and covered by The Detentions on their latest CD.

The biggest event of the weekend is the Pardi Gras Street Party. Blocking off Bourbon Street, the bands and artist rotate over the next 6 hours.

During the short break in the middle, the Live Auction included a number of Jimmy Buffett autographed items to raise money for local charities in New Orleans. Additionally, the Paradise Charitable Foundation donated items to benefit the Parrot Heads In Need (PHIN) Fund to specifically help Parrot Heads in Texas and Missouri affected by recent natural disasters.

The Southern Drawl Band kicked it up a notch and got the crowd moving. Jerry Diaz and Hanna’s Reef always put on an energizing show to close out the Street Fest. Their last set is always the best part of the show when all the artists come back on stage for photo ops and big finales.

Are you ready for the Pardi Gras 20th anniversary in 2017? See you there!