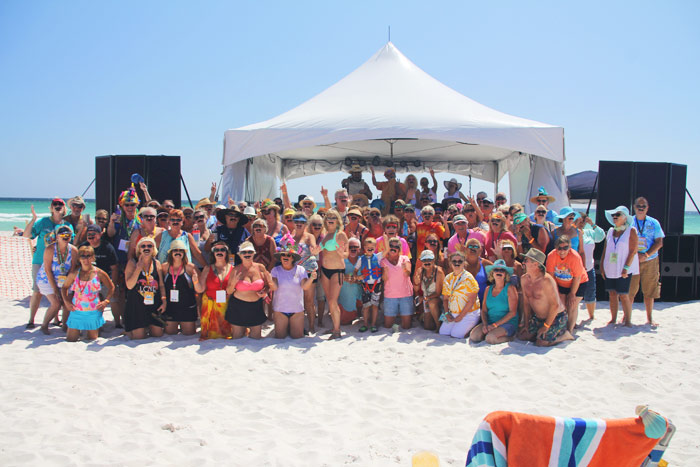 The sugar sand beaches of Panama City Beach welcomed another large group of Parrot Heads for the Parrot Head Rendezvous of 2017 this last weekend. Almost picture perfect weather and the incredible musical lineup made this event one of the strongest in its 12 year history. Hosted by the Panama City Parrot Head Club and attended by phriends from 26 states, Rendezvous 2017 was a big success!

While the total financial results aren’t known yet, the club’s charity, Girls Inc. of Bay County, is sure to get a nice donation. Girls Inc. inspires all girls to be strong, smart, and bold through direct service and advocacy. This comprehensive approach to whole girl development equips girls to navigate gender, economic, and social barriers and grow up healthy, educated, and independent.

Over the last 11 years, this event has donated more than $250,000, all to Bay County charities. “Party With a Purpose” lives on! Panama City Parrot Head Club President, Susie Lanier, comments on the success of this years’ event saying: “First we want to thank all the volunteers from the Panama City Parrot Head Club and Girls Inc. who helped make this a truly special event. It was a team effort and a whole lot of fun. Sea you next year!”

Rendezvous was also broadcast on Tiki Man Radio. Danny Lynn streamed live interviews with the musicians, and he and his entourage kept the stage area lively and entertaining. 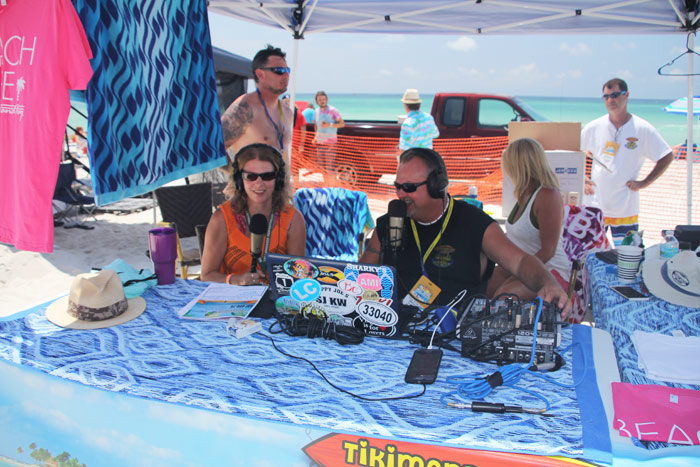 Thursday
The event kicked off on the beach stage this year for the first time -but not the last. Master of Ceremonies Jeff Brewer introduced Drop Dead Dangerous at 6 pm Thursday evening, and leaders Melanie Howe and Kitty Steadman made sure the opening night music started the event with a bang.

They rolled through a combination of original music and cover tunes, but rest assured, their cover tunes are performed in their own one of a kind style. Melanie’s driving percussion and Kitty’s powerful voice certainly made a great way to start Rendezvous!

Friday
A beautiful Friday morning saw tents begin to pop up. The 38 available tent slots sold out in 45 minutes two months earlier! Jeff and the Camaros came on at 1 pm, and quickly things shifted straight into high gear. They opened with two of their originals, “Let’s Rendezvous Tonight” and “What Could Happen?” and kept rocking the house for 3 hours straight—no break!

Per Jeff Brewer, this was also a “Mustache record event” with 244 mustaches given to the welcoming and dancing crowd! During that set, there was the Jell-O Shot contest! 25 judges donated $10 each to sample a varied selection of Jell-O shots and get to sample as many as they wanted! Talk about “What Could Happen?” The winner by one vote was Brenda Brewer (Jeff’s wife) with her tasty RumChata Cheesecake Pudding Shots.

Three time Trop Rock Music Association award winner Donny Brewer (no relation to Jeff —but they claim to be brothers from another mother —or “BFAM”) came on at 4 o’clock with his long list of original music that has quickly vaulted him into one of the top Trop Rock musicians in the country. He quickly had the crowd in the palm of his hand. Kitty Steadman came up and sang a few tunes with him too. This talented Trop Rocker can certainly lay down fun quality music and work the crowd, and it works in whatever environment he’s in.

Southern Drawl Band finished Friday evening with a bang. Their hard driving southern rock sound has entertained 10’s of 1000’s of Parrot Heads over the last few years, and this night was no exception. The crowd was quickly on their feet and did not sit down throughout the set. Lead singer Mike Nash’s smooth vocals and showmanship was the perfect way to top off the evening.

Saturday
Another beautiful morning got rocking quick when Rick Lamb and the Phin Addicts took the stage. Their solid percussion and catchy original tunes, matched with some cover music you wouldn’t expect to hear, brought more dancing and singing to the audience on a warm Saturday afternoon.

The “Boat Drink” contest on Saturday afternoon, just like Friday’s contest, was a huge success. Kathy Lloyd of Panama City took home the trophy with her “Kathy’s Better Than Bailey’s Irish Cream” concoction! The fun and games continued during the day with the “Parrotheadiest Tent” contest, best decorated Hat Contest and the Thumb Tucking ball Toss game where contestants kept their thumbs in their pockets while trying to catch a ball in their basket. 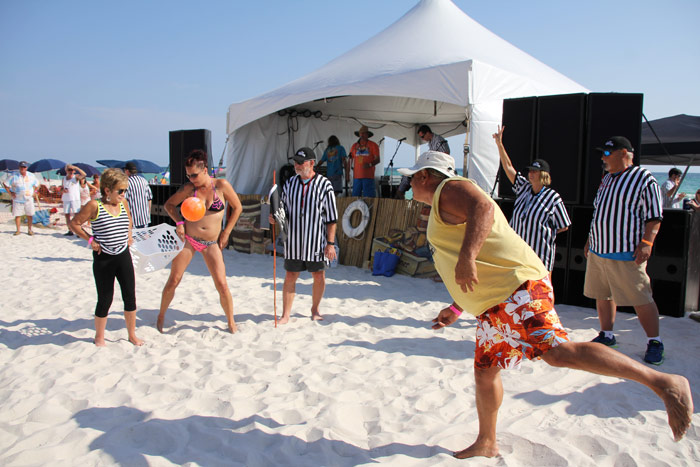 On Saturday afternoon, a new musical act visited Rendezvous and the Parrot Head nation for the first time—and hopefully not the last! “The Sounds of Summer” is a Beach Boys tribute band from Indiana. They were recently on the Axis channel series “World’s Great Cover Bands” and it’s no wonder! They played almost 3 hours of Beach Boys music.

The crowd knew all the words. We danced, threw beach balls, and sang every song with the band. Some people were misty eyed at the memories that this music brought back. Every Beach Boys favorite you could imagine was played, from “Wouldn’t It Be Nice” to “Fun, Fun, Fun” to the rousing closing song of “Good Vibrations.” Something tells me this is not the last time we hear them!

For the final act of Saturday night, Jim Asbell and the Tropiholics did their normal act —which is to WOW the crowd. They started off rocking and did not stop. With no break, they went through original music, a good selection of Jimmy Buffett and Zac Brown music, as well as some great classic rock and roll tunes. They are well known in the Trop Rock world, and Jim’s witty banter with the crowd—with a few Tequila shots along the way, made for another great evening with great music, great phun and great phriends!

Sunday
Sunday morning saw a good chance of rain coming, so the music was moved inside to Sharkeys, which turned out to be a great thing that will probably be repeated. On Sunday’s, many people are packing up and leaving, but having the remaining crowd inside filled up the room and gave everyone the chance to talk, reminisce about past events, have lunch and libations, and listen to more great music.

The Conch Fritters from Jacksonville, Florida started at 11 am and what could have been a “Hangover Sunday” quickly turned into a “Fun-day Sunday.” With the only steel drums of the whole event (which is rare), the Conch Fritters played a perfect set for Sunday morning. If you haven’t heard the Conch Fritters, do your best to, you will not be disappointed. 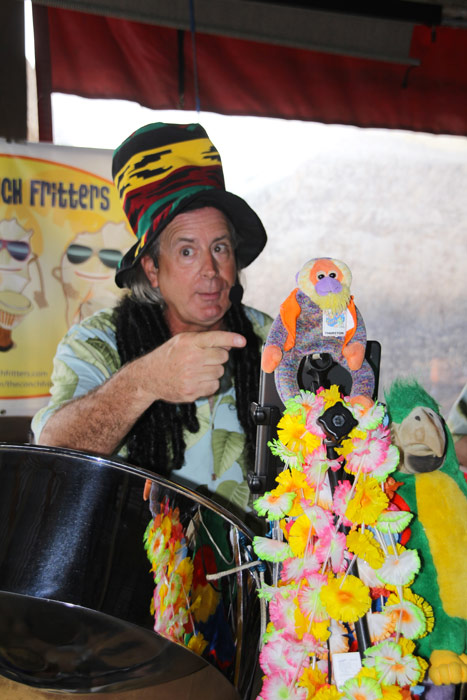 The closing act of Rendezvous was none other than TRMA winner Don Middlebrook. He played selections from his many albums. Don constantly plays all over the country, he is truly a working Trop Rocker, so everybody there knew him! He introduced some new music, and had one person literally doing cartwheels! We won’t say her name, but her initials are Colleen Fuchs (oops that slipped). Don was the perfect closing act, winding down what some are saying was the best Rendezvous ever.

Centaur Productions of Panama City provided excellent sound throughout the event through trying conditions in the sun, in the sand, through one group to another. Emcee Jeff Brewer closed out Sunday afternoon thanking not only the 100’s of people who came to the event, but also to the tireless work from the Panama City Parrot Head Club, along with great involvement and great help from Girl’s Inc.

This truly was an event that will be remembered, and it ended with those familiar four words, “See You Next Year!” We can’t wait!