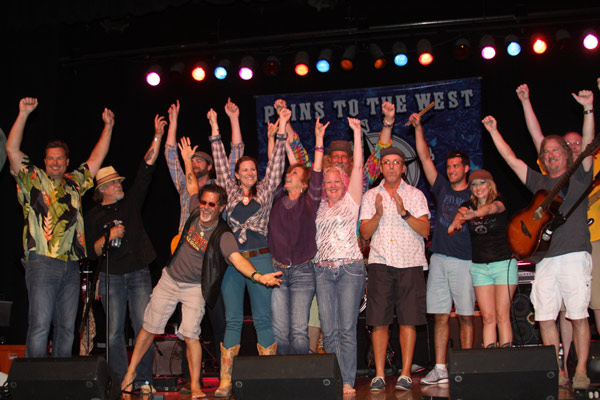 Phins to the West 10 Year Anniversary!

This year’s Phins to the West was truly the “Party that never ended”!  From Wednesday through Sunday over 500 Parrot Heads and Trop Rock music lovers from all over the country (and even Canada) partied with a purpose at the Avi Resort in Laughlin, NV.

The weather was beautiful but if the sun got to you, there was even more indoors. At registration the “Horizon Stage” kept the music coming with Ukoloco, Steve Tolliver, Andy Forsyth, Janet Lantz,The Desert Island Band, Susan Schauf, Ray Cody and New Mexico’s Just For Fun Band.

On Friday & Saturday afternoons, the Arrow Weed lounge had some “up close & personal” solo performances by some of our poolside personalities and special guest, Tommie John from Knoxville, Tn.  And that was just the daytime entertainment!   The afternoon fun continued with a  Cornhole Tournament, Living Like A Pirate’s Cup decorating and shopping in the fabulous mini-mart at Poodles Island Wear, Rum Therapy, Barefoot Beachbums and all the cool vendors that were there.

On Wednesday, many of the early birds joined the jet boat lunch trip down to Pirate’s Cove and that night, the Calypso Nuts (Robbie & Lynley) rocked the pool area with “Think Pink and Let’s Drink”! Free beer for all and everyone got in the pink spirit in honor of Lynley-Tolls Meade. 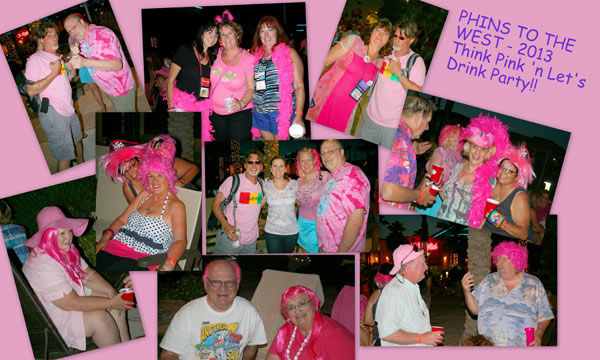 Thursday night kicked off the TOGA party with “Girlz Rule” and Tropical Soul – Heather Vidal, Kristie Bobal and Lynley Tolls.  These gals are awesome together! Dennis McCaughey, Dave Huxta and Heather (Tropical Soul) are always a crowd pleaser.  Then, a Phins to the West favorite, Stars On The Water took the stage. We were all so glad to see Jerry Gontang bouncing around the stage with his new knee and his energy was contagious.  The band sounded great! 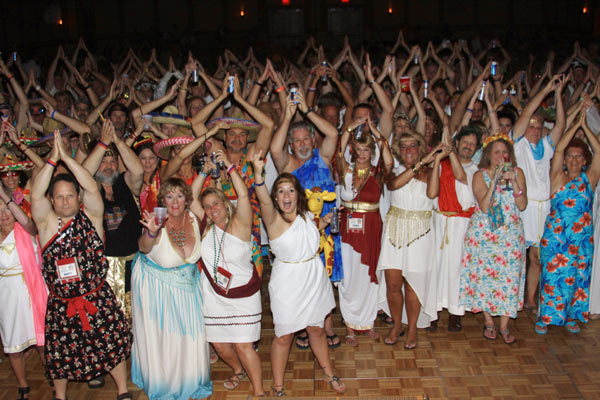 Friday night opened with the fantastic Scott Kirby and he put on an amazing 2 hour performance. I am a HUGE Scott Kirby fan and was glad to see I was not alone as the room filled up early to catch his solo act.  PTTW is known for Theme nights and everyone showed up in their best “Rancho Deluxe” wear.  Then MAGIC happened……..the Phins to the West ALL-Star Band! This amazing group of talent pulled together out of an unforeseen schedule change and gave PTTW something that will probably never been seen or heard again.

At one point I looked out over the crowded dance floor and realized that, yes…people were dancing but they couldn’t take their eyes off the stage.  You just never knew who was going to show up next!  Besides their amazing talents, this also shows another way that we “Take Care of Our Own” and their dedication to their fans as they came together for the good of the event and made Trop Rock history.

Saturday night’s “Gypsies In The Palace” started with TallDaddy! It’s always fun to watch Tall Paul and Crawdaddy jam together.  Then, as (Beachfront Radio) refers to him, “The Godfather of Trop Rock”, Jim Morris and the Big Bamboo Band rocked the room.  This was a special treat for us West-coasters as the whole band rarely gets over here.

And talk about raising money…..there were ongoing raffles and one of biggest, best Silent Auctions ever seen!!! To top it off, expert auctioneer Marc Nesseler ran an incredible LIVE auction raising thousands of dollars which included a personally autographed guitar from Zac Brown and the Band to Phins to the West!

This event would never be as successful without the dedicated work of our Board of Directors, volunteers, sponsors, mini-mart vendors and participants.

Our Chairman – Jim Hill
Director of Finance- Nina Hill
Merchandise Director – Doug Murray
Communications Director – Paula Masiulewicz
Event Operations Director – Alan Conklin
Sponsor Director – Lori Siler (the QUEEN of silent auctions!)
And I was privileged to be the Director of Entertainment. And I must give recognition to our Emcee for the entire event.  DJ Jeff did a fantastic job! 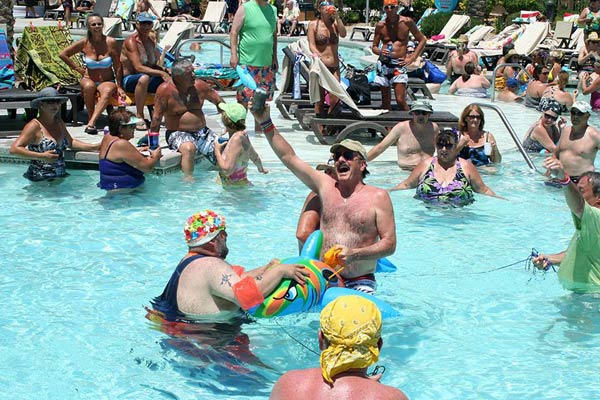 To try to thank everyone involved with the success of this event would be impossible and I’m sure I’ve missed someone.  We know our main objective to “Party with a Purpose” was a success and our charities, The Boys & Girls Club, Keep Memory Alive and the DJ Jeff/Taking Care of Our Own Fund will be the beneficiaries.

Huge kudos to all the great photographers as well.  Carrie Post, Steve Cantwell, Jim “Axl” Siler and all the others! You can see all the fun on the Phins to the West Facebook Page.

Beachfront Radio recorded these amazing performances and will be aired at specific times to be determined. Stay tuned to the Beachfront Radio Facebook page and we hope to see everyone back at the River in 2014!