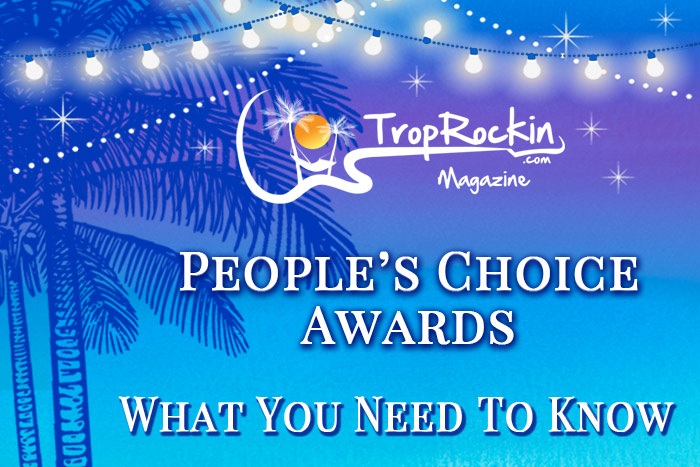 WHO IS TROP ROCKIN’ MAGAZINE?

Our team of volunteers strive to bring you the articles and experiences representing the spirit, camaraderie and passion of the Trop Rock world.

What do we cover?

Bringing Us All Together at these Key West Events:

WHY A PEOPLE’S CHOICE AWARDS PROGRAM?

Over the years, we have received many requests for this type of program from both the artists and the fans. Like most communities, there is a local magazine who hosts a recognition program in a People’s Choice format.

As the community magazine for the Trop Rock music genre, we are excited to join the ranks of magazines across the world who host a People’s Choice style awards program. Providing you with the platform to recognize who you believe are deserving of special recognition within our community.

WHAT IS THE PEOPLE’S CHOICE AWARDS?

Trop Rockin’ Magazine’s People’s Choice Awards (PCA) is a community-driven effort to expand recognition for the amazing artists and people in the community beyond the Trop Rock Music Association Awards (TRMA).

The PCA is designed to complement the existing awards program in the genre, not replace them.

Trop Rockin’ Magazine and the Trop Rock Music Association are completely independent organizations. We support each others efforts in furthering the Trop Rock music genre.

What makes the PCA different from the TRMA program?

HOW CAN YOU NOMINATE AND VOTE?

The People’s Choice Awards are open to all Trop Rock music fans and artists to nominate and vote on 15 different trophy awards and 5 “Fun Song” certificate awards.

If you want to nominate and/or vote, become a subscriber for free to Trop Rockin’ Magazine:

The nomination ballots will be emailed to all Trop Rockin’ Magazine subscribers in July. We will most likely send out nominations and voting ballots in phases between July and August in order to effectively manage a completely write-in nomination system.

The benefits of a write-in system is that we, the magazine, are not supplying a suggested list of nominees that could sway the nomination process. By conducting a completely write-in nomination ballot, it will take us a little longer to tally nominations.

The nominations will be narrowed down to the top nominees and an updated voting ballot will be emailed.

As this is our first time hosting this new nomination and voting platform, please be considerate and patient. We are not determining specific dates for every step in this process at this time. It is a learning process for us as well and we want to make sure it is correct and efficient.

Here is a link to the People’s Choice Awards home page where you can review the award categories.

Absolutely! Let your friends, fans and community know that you’d love to be nominated. Reach out to them through your newsletter, website and social media.

Winners will be revealed at the exciting awards ceremony on Wed. Oct. 31st in Key West at the San Carlos Institute (on Duval street, next door to Margaritaville). Exact time and entertainment lineup to be announced this summer. Nominally priced tickets to the event will go towards supporting the costs of utilizing this beautiful theater venue.

WHAT HAPPENS IF I’M A TOP NOMINEE OR I WIN?

It’s truly an honor to be nominated and voted a People’s Choice Awards Winner. It means that your efforts are well recognized, above the standard and appreciated in the community. You’re the best at what you do!