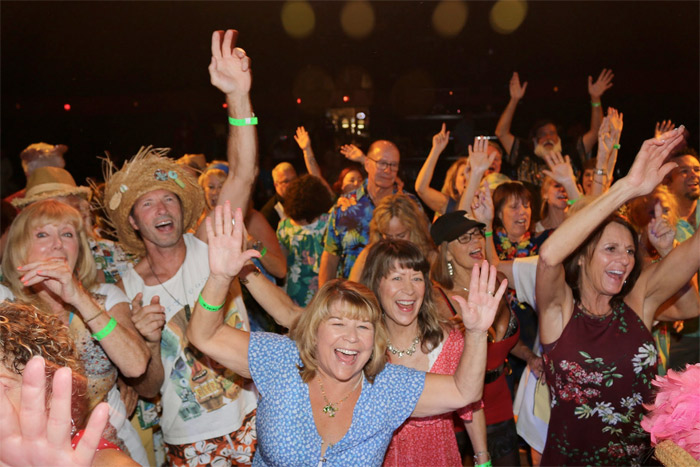 Thank you to Steve Cantewell and Carrie & Scott Post for your great photos.

Phins to the West celebrated their 15th year by honoring attendees, raising an amazing amount of money for Keep Memory Alive and putting on such a phin-tastic beach party, I didn’t even notice we were in the Nevada desert.

Added this year was a pre-party music jam on Wednesday evening in the ballroom where the silent auction items, registration and vendor booths are located.

This turned out to be a big hit with the casual atmosphere and everyone greeting each other. The musicians were winging it a bit, calling upon each other to come up and join in or take over.

The audience never knew what was going to happen next and that made it all the more fun.

Pool Days of Music and Games

The daytime fun at Phins to the West starts at 11am at the resort pool with live Trop Rock music and silly adult games. Hopefully, you heard some of the fun we were having during the live broadcast on Radio Trop Rock.

Another addition this year was the Captain Morgan ladies who handed out rum samples. The resort offered several drink specials at the popup bar set up by the pool, making it very convenient to grab a cocktail.

John Friday was the man with the plan at the pool, coordinating with the musicians as well as performing.

He captured my heart when he performed a fun parody he wrote about Trop Rockin’ Magazine. Bribery? Yes! He started by saying he wrote it in hopes of making it on the front page of Trop Rockin.com… so we’re going to work on it! 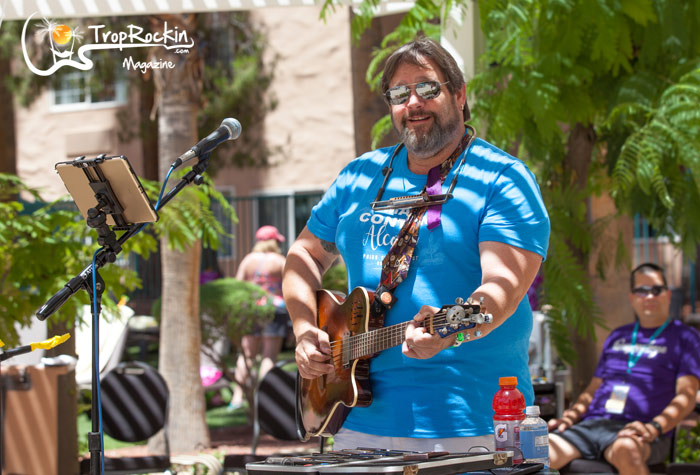 Several musicians not on the official lineup somehow ended up at Phins to the West. Big thanks to Danny Rosado as well as Erica “Sunshine” Lee for volunteering their talents and entertaining us.

Jill Brown and Colin Howard, better known as the duo Chill, were back again this year. Upbeat and fun as always, they are perfect for the pool scene. They announced good news too – their first CD is expected out soon.

The Bulowayos, Cory Young & Ty Thurman, were full of energy performing a lot of great covers. Jim Hoehn is a gem in the Trop Rock scene and he buckled down to play more songs than normal.

Donald James also returned this year and if he would play “Trop Rockin’ Summertime” a thousand times in a row, I’d never get tired of it.

Thursday is the first big concert night and it’s always “Purple Night” at Phins to the West.

One glance around the dimly lit showroom and it was clear everyone was proud to show off their support for Keep Memory Alive, the main beneficiary of the donations raised at Phins to the West.

The sea of purple ranged from attendees wearing simple to extravagant purple costumes and all the musicians decked out in purple shirts. 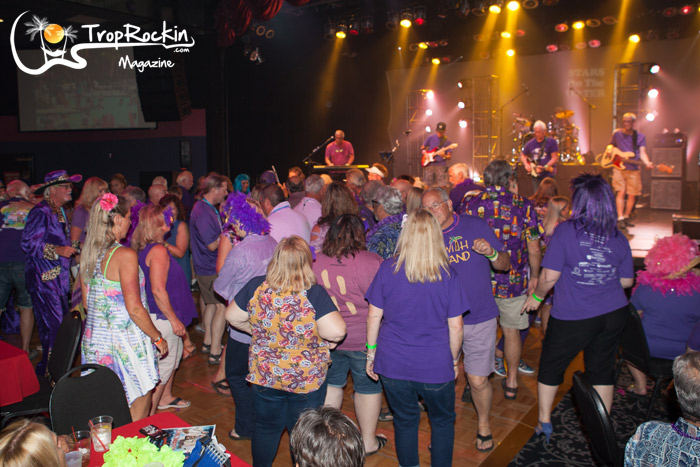 Stars on the Water performed energetic classic rock songs to favorite Jimmy Buffett tunes, some we don’t get to hear too often.

We swayed along to “Barometer Soup” and the dance floor was rambunctious during The Monkees’ cover “I’m A Believer” which included a surprise guest when Erica “Sunshine” Lee jumped in to sing along with the band.

During intermission, the Phins to the West committee welcomed members from Keep Memory Alive on stage for the large check presentation.

We learned more about Keep Memory Alive and not only are they focused on cutting edge work in Alzheimer’s research, they provide much needed community services such as support groups for caregivers and music therapy to those living with memory loss. 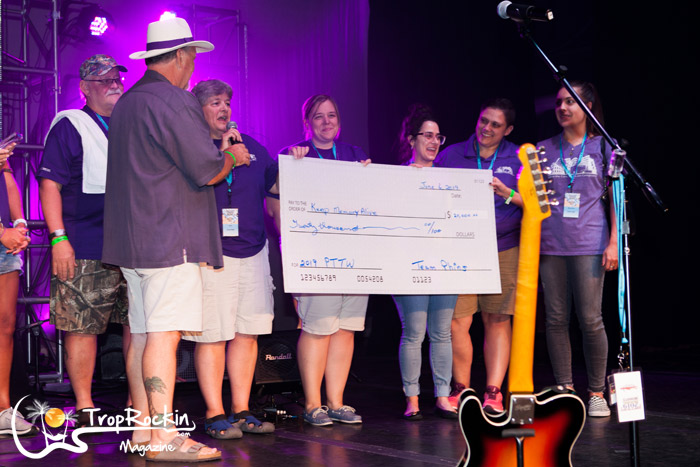 Although that big giant check said this year’s donation to Keep Memory Alive was $20,000 (wow!)… the following evening Doug Murray announced that their was a calculation error.

The actual total was $25,000! Many times this night and over the following days, Doug reiterated this achievement is due to the great generosity of all those attending.

Friday night’s theme was “Beach Blanket Bingo” with direction from the Phins to the West committee to interpret it however you want. Attendees went all out fun with this theme and came to the showroom dressed in a variety of beach themed attire.

There were costumes reminiscent of the 60’s when Annette Funicello and Frankie Avalaon were on the big screen. A group of cheeky beach coverups and several people who went with a literal interpretation and dressed as bingo cards.

Of course, quite a few people came dressed as they normally do! Which means their trusty Hawaiian shirt was a perfect costume for the night.

The Friday night headliner was Jimmy Parrish and the Waves. They kept these beach kids on the dance floor all night with original beach tunes mixed with great choices for cover songs. Mixing it up from Bob Marley to Crosby, Stills and Nash. 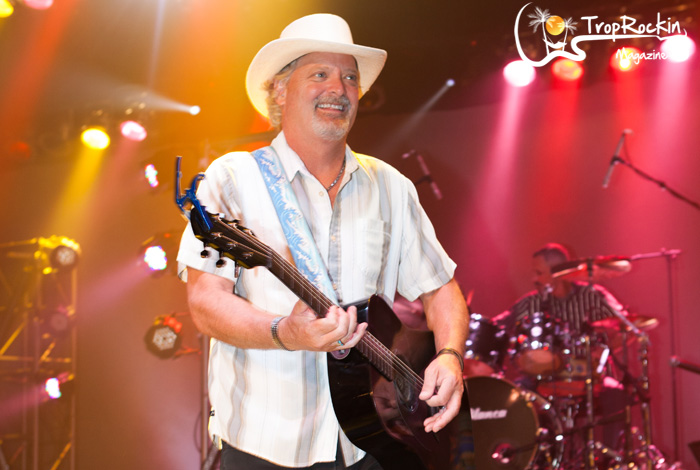 The energy in the room hit rock star levels when the band launched into the 1960’s hit “Wipe Out.”  The floor was jumping and everyone was showing off those 60’s dance moves.

Donny Brewer joined in on the bongos for a song then added a little cowbell jig. And who knew Jimmy Parrish could move like that?

Intermission turned out to be one of the night’s most amazing moments. The Phins to the West committee honored the people who have attended all 15 events with a commemorative award and to go with this year’s them “15 Will Get You 20”, if they attend the next 4 years their 20th year will be free, which is an awesome package!

The theme for Saturday night was “Retro Phins to the West” where attendees could choose from any favorite theme night from previous years. Pretty much an anything-goes kind of theme!

There were plenty of pirates, wenches and flamingos along with a priest, people in togas, a caveman and groups of friends wearing matching t-shirts.

Donny Brewer and the Dock Rockers put on a concert to remember with so many unique moments and performances.

To commemorate performing (close) to Las Vegas, the band donned large sideburns and Donny sang an outstanding rendition of Elvis’ “All Shook Up.” The floor was so packed, I couldn’t squeeze through to get a great picture of this moment!

Donny was giving it his all – including the signature Elvis dance moves. 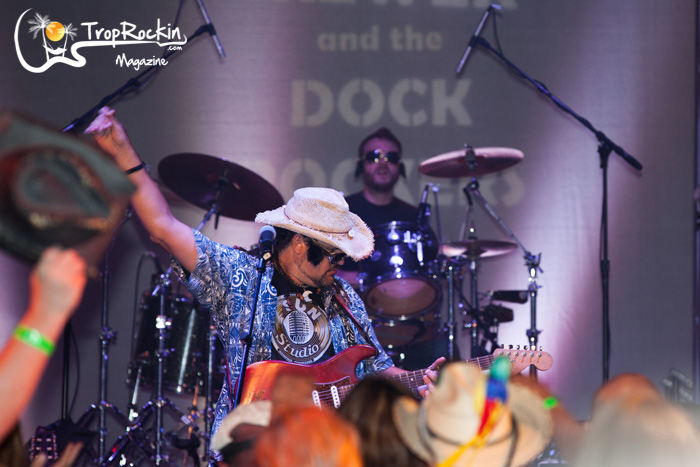 Plus an amazing show of his musical talent, diversity and coordination when Donny switched instruments with each band member, without missing a beat.

Danny Rosado took a turn at the mic and later everything went a little wild when Bob Karwin joined the stage to sing a spirited version of Paula Abdual’s “Straight Up.”

This Phins to the West gave us an incredible musical oasis in beginning of this summer and I’m excited to see all that happens next year.