Rick Lamb of The Phin Addicts (formerly Cruize Control) tells us about how he came to write his best-known song, “Red Sky at Night,” while he was in the Navy. He also relates how he came to love Buffett music and what Trop Rock means to him now. If you were at the annual Parrot Head convention Meeting of the Minds (MOTM) last November, you probably heard Rick and the band play part of the Street Party on Duval. Here is Rick Lamb’s Story Behind the Song: 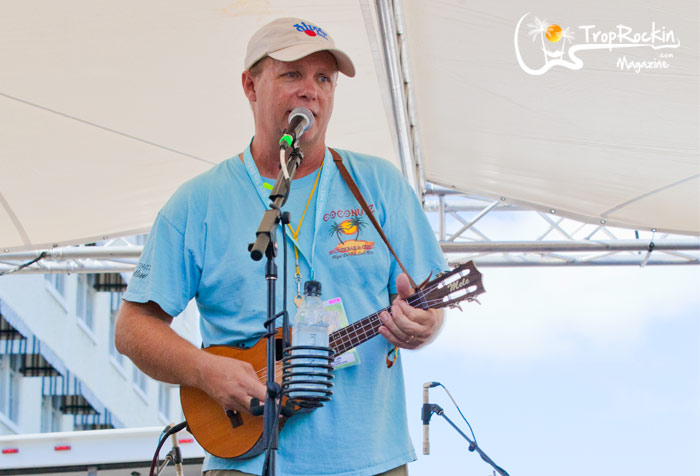 Most of my early song writings are of tales from my 10 year hitch in the Navy on the ammunition ship, U.S.S. Butte AE-27. I had written songs about sailing and of visiting the many ports I was lucky to have ported in. I was fortunate to have traveled to 5 of our continents, mostly in the Mediterranean Sea and several trips to The Caribbean Islands! One of the oldest sayings throughout time was in reference to the daily weather and a famous sailor quote was, “red sky at night, sailor’s delight,” “red sky in the morning, sailor’s warning.” I knew there had to be a song in there somewhere.

Red Sky At Night was scratched out on paper, back in 1985 while stationed in Mobile, AL at the US Naval Yards. We were undergoing an overhaul of the ship and would be there for the entire year. It was during this time that I was subjected to a local artist by the name of Jimmy Buffett. His music was played everywhere you turned and he was a hometown legend. I truly believe this year in my time helped form what would be my style of music playing. Although not titled Trop Rock at the time, I became a big fan of beach tunes and reggae. I had always been told that my vocals sounded close to his which made me pursue his music deeper than the handful of songs that were popular to the world. I instantly recognized that they weren’t just songs but great stories about life about the ocean and the easy living style on the beach. Being Sailors was something we shared in common, although we experienced different styles of sailing, we both loved to write about sailing the seas and of pirate tales!

I was introduced to Parrot Heads in 2007, when approached by someone that said I sounded just like Jimmy and I should look into it. I met with The Ozark Mountain Parrot Heads here in my home town in Nixa, MO and shared some Buffett tunes and some rock covers for them and the rest has been history. I joined the Margarita M.A.F.I.A. that same year and I have been blessed with sharing my music with Trop Rock music lovers from across the country and in the Caribbean.

The transformation from rock and roll to Trop Rock was easy for me because I have stayed with my roots and most of the songs I write are of a reggae rock style. So in 2008 I fine-tuned Red Sky At Night into its true reggae form and had learned to play the ukulele by this time. It is a song that has a way of putting a smile on your face and looks at enjoying each and every day with whether it be a sunny day or a stormy day. It is by far the most popular that I have written to date. Thanks to all who have supported my music both as a solo artist and with the band The Phin Addicts. Couple of new CD’s on the horizon, so look for them soon. Wishing you all fair seas and for a Red Sky At Night!
–Rick Lamb

This post contains affiliate links at no extra cost to you or the artist!