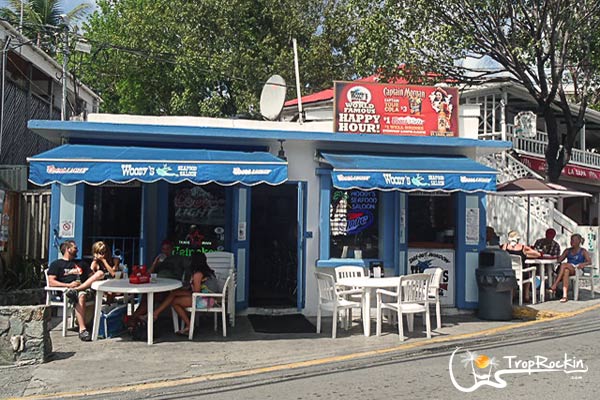 A common theme of cruising is drinking.  Certainly not every cruiser drinks, and most don’t do it to excess, but many do it often.  Happy hour aboard somebody’s boat is pretty much a daily affair.  When in port near a town, often there is a “cruisers” bar that everybody knows about.  On the island of St. John, in the USVI, there are two bars that stand out as well-known cruiser’s bars.

St. John is about ¾ US National Park.  That leaves only a couple places on the island where most of the people live and work.  On the west end of St. John is the main port and good sized (2700 people) town, Cruz Bay.  Cruz Bay has a couple of grocery stores, many shops and boutiques, several resorts, Customs & Immigration, and of course many bars and restaurants.

The place that is well known to cruisers is Woody’s Seafood Saloon.  Woody’s is home of the “World Famous Happy Hour”, which is a great deal.  To find Woody’s one must only stumble about two blocks inland from the ferry dock.  In addition to being a great bar, Woody’s has a good simple menu of seafood and burgers.  Our favorite plan when visiting Woody’s is to arrive about 2PM in search of lunch.  The normal lunch rush is gone by then and getting a seat at one of the eight or ten tables isn’t a problem.  By the time we finish eating around 3 PM,  the bartender bangs the large bell behind the bar with a bottle opener to indicate happy hour has begun. 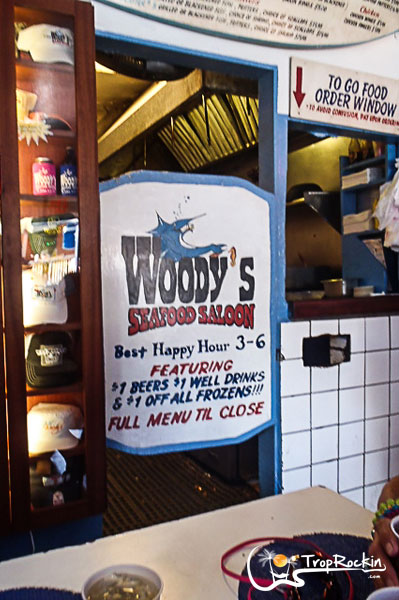 For the rest of the afternoon, we enjoy the $1 beers or well drinks.  This plan allows us to return to our boats before dark with no problem.  This is important because Cruz Bay is not a place to park your personal boat.  We either need to taken a mooring a half mile around the corner in Caneel Bay and dinghy in, or moore in one of the other bays even further away and arrive via taxi.  Either way, it’s a good idea to be back to the boat by dusk.  On our last visit, Woody’s had just changed ownership, but the new owners vow to not change a thing, and have possibly doubled the fun with the acquisition of the bar across the street.

On the opposite end of St. John is the other main settlement on the island.  As well as being on opposite ends of the island, the two towns are on the opposite end of the spectrum in terms of busyness.  Coral Bay is a much slower, quieter, more laid back town (600 people) on the eastern end of St. John.  The large bay is home to a fleet of couple hundred boats that rarely leave.  Some are full-time liveaboards that are perfectly seaworthy, and many will never feel the swell of the ocean again, but they still float, and may be somebody’s home.  The town is a haven for people, boaters and non-boaters alike, who have escaped from somewhere and made St. John their home.  For some reason, it is definitely off the radar for charter boats and most cruisers. 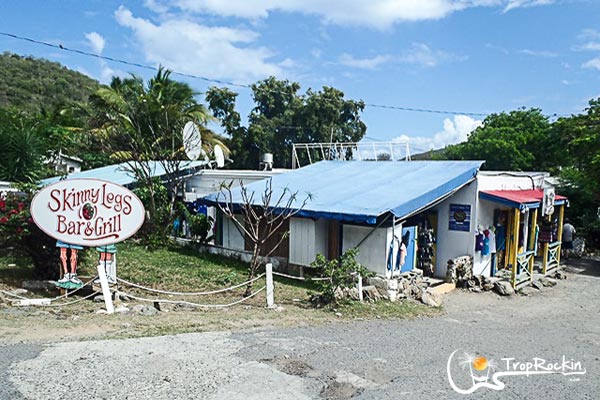 There is a bar in Coral Bay however that is pretty well known.  Skinny Legs is conveniently just a short walk from the dinghy dock at the northeast corner of the bay.  You can tell a lot about Skinny Legs and the laid back feel of Coral Bay by their mottos – “A Pretty OK Place”, and “Same Day Service”. 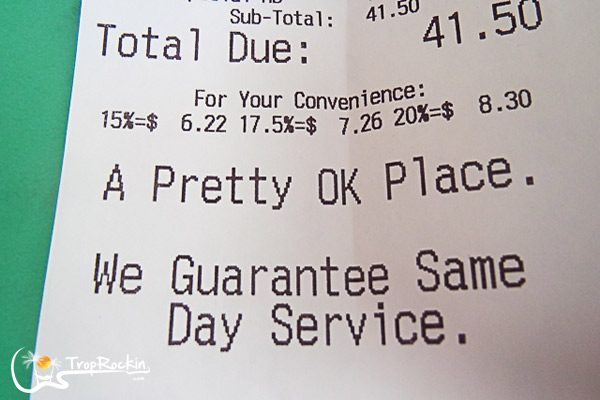 Skinny Legs was named for its original owners and their apparently skinny legs.  The place is pretty much open-air with old sails for a roof.  Known for their great burgers, although they have many other things on the menu also.  What they don’t have, and proudly proclaim it, is a deep fryer or a blender.  So there will be no French fries here – it will be chips with your burger.  And forget the sissy blended boat drink with an umbrella on top.  Cold beer or on the rocks is the way to go here.  Skinny Legs is also under fairly new ownership (April 2012), but the new owners know what a good thing they have and don’t plan to change anything, such as the woman’s horseshoe tournament known as the “Pitch and Bitch” will still carry on.

If you have the opportunity to spend a couple days on St. John, we highly recommend both of these fine establishments as stops on your travels.