Chicago has long been known as The Windy City and for their Chicago style hot dogs and deep dish pizza. Soon Chicago may be known as the location of the highest energy trop rock festival in the nation. You may be thinking to yourself, “Self, trop rock and Chicago go together about like snow skiing and Aruba.” That may have changed in 2017 with the second annual Summer Chi.ill Trop Rock Music Festival as trop rock fans and top rated artists from all over the country converged on Pheasant Run Resort, just west of Chicago in St. Charles Illinois, the weekend of August 3rd.

The annual event is a combined effort between the Chicago Parrot Head Club and Cornerstone Services Incorporated, a 501c3 charity that assists special needs clients. According to their website “Cornerstone Services provides progressive, comprehensive services to people with disabilities promoting choice, dignity, and the opportunity to live and work in the community. Since 1969, Cornerstone has been a leader in meeting the unique needs of individuals with developmental disabilities, mental illnesses, physical disabilities and sensory impairments.”

The Chicago area, with hundreds of trop rock loving parrot heads, were sorely missing a local festival to take their minds off the predominantly cold weather in the region. Although they love traveling to the Gulf Coast, from Texas to Florida, where most events takes place, they were ready for something that they didn’t have to travel far in order to attend. More importantly, they wanted an opportunity to show off their hospitality and charitable spirit.

The event coordinators, Billy Brehm and Kristin McFadden, headed up a superstar volunteer team made up mostly from the Chicago Parrot Head club. This team’s goal was to put together an event folks from other regions of the country would travel to attend, while also raising money for the charity. Registration for the event sold out at over 300.

The music began as early as Thursday night. “Flip Flop” Dave Fogler and Mark “Catfish” Vesser put on a low key show for those that arrived to the event early. The show was on Pheasant Run’s “Bourbon St”, a mockup of a small portion of the infamous party location in New Orleans. It was a great chance for those returning to Summer Chi.ill to renew relationships while the “first timers” mingled among the crowd and made new friends. “Flip Flop” Dave and “Catfish” entertained the crowd with some fantastic tunes and were joined by Donny Brewer for a couple of songs. 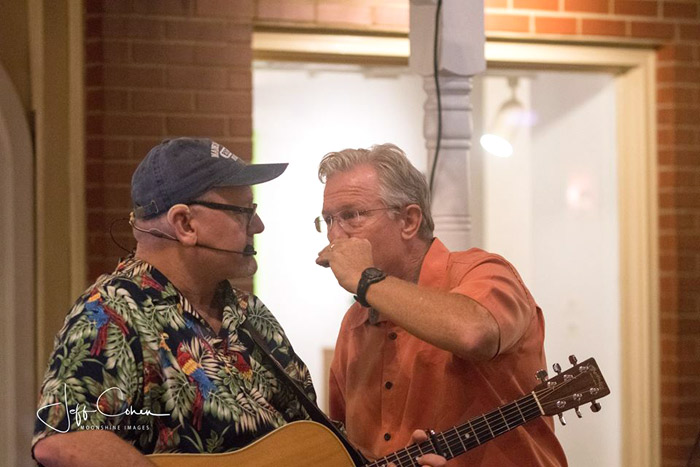 Friday brought the event an entire new definition of “chill” as the weather was overcast, drizzly and in the upper 50s. The schedule for the day was for Todd Donnelly, Drop Dead Dangerous, The Detentions and Southern Drawl Band to each perform on the outdoor stage set up near the swimming pool.

Todd Donnelly took the stage mid-afternoon as folks braved the weather to enjoy Todd and his sons perform their steel pan heavy island tunes. As Todd performed the event coordinators surveyed the crowd and realized it may be in everyone’s best interest to take the remaining day’s shows indoors. Billy and Kristin worked with their volunteers and the Pheasant Run staff to set up a place for the next three shows to take place near the indoor pool.

At the completion of Todd’s show everyone headed indoors for Drop Dead Dangerous, The Detentions, and Southern Drawl Band. Kitty Steadman and Melanie Howe of Drop Dead Dangerous kicked off the indoor shows with their brand of powerful vocals combined with spirited percussion. Next Dan and Chris, the Texas teacher duo “The Detentions” shared their harmonizing vocals complimented by their quick wit.

Southern Drawl Band was joined by John Patti as they closed out the evening with a musical performance that can only be described as energetic. SDB had the crowd moving and grooving throughout the resort’s natatorium. JD Edge surprised the crowd with a couple of songs from his forthcoming CD including his first ever trop rock song “Living Life On The Rum.” “Flip Flop” Dave and Mark “Catfish” Vesser performed between sets to ensure there was non-stop entertainment. Dave brought Donny Brewer to his knees in awe as he performed a never before heard original tune he wrote “I Wish I Were Donny Brewer.”

Saturday brought in the sunshine and warmer temperatures making the events scheduled to be held outdoors at the pool a “go.” These shows included Charlie Imes, Nadirah Shakoor with John Patti, Thom Shepherd and Coley McCabe, and Sunny Jim with John Patti. Charlie Imes got the sun loving crowd warmed up with his own brand of west coast style trop rock. By the time Nadirah took the stage the pool area was at capacity and ready for her soulful sounds. Nadirah danced with those near the stage as she sang some of the songs she performs as a Coral Reefer at Jimmy Buffett shows and sprinkled in some Motown classics.

Thom Shepherd and Coley McCabe arrived just in time to keep the crowd smiling. They performed songs from each of their libraries to include some songs yet to be recorded such as “Waitin,’” a gospel inspired song, and “Flamingo Shoes” written about Thom’s favorite footwear. Near the end of their set Donny Brewer joined them on stage for songs they had collaborated on, making the transition from Thom and Coley’s set, to Donny’s, seamless.

Donny kicked off his set with quick paced drinking songs stopping only long enough to mention he’s still a hundred or more drinking songs shy of Thom. Donny’s show included a conga line which he led around the audience, all while still playing the guitar and singing. Sunny Jim joined Donny towards the end of his set allowing them to perform together setting up yet another seamless transition into the next show; Sunny Jim featuring John Patti on percussion. Sunny Jim is known as one of the greatest trop rock artists throughout the life of the genre and never disappoints. You add John Patti on percussion and you’ve got a recipe for trop rock paradise. Music was provided between sets again, but this time by none other than Brendan Mayer, son of Coral Reefer Peter Mayer, and an amazing musician in his own right.

After a break for dinner the party moved indoors to the banquet room and consisted of Mr. Myers Band and the cover band Johnny Russler and the Beach Bum Band. Prior to Mr. Myers taking stage an event took place you’ll see at no other trop rock event anywhere. Shannon Rovers Irish Pipe Band, a marching bagpipe group, entered the room and performed to the appreciative audience. Mr. Myers Band had the dance floor full as they played their calypso reggae blended tunes inspired by the islands.

The transition from Mr. Myers to the Johnny Russler band was not quite as seamless as those earlier in the day but once Johnny Russler and the Beach Bum Band began their show it did not take long for the capacity crowd to return to the dance floor. The band was skilled at knowing the audience’s favorite cover tunes from the 70’s into modern day. At one point Donny Brewer joined the band on stage to astonish the crowd with his guitar skills. You could see by the look not only on the faces of those in the audience, but also those on stage performing with Donny, many were not aware he was such an accomplished musician on the electric guitar. This show was a perfect representation of what the weekend had been to this point: high energy, smiling faces, and friendships being made.

There are many trop rock festivals that leave Sunday simply to allowing folks to check out of their rooms and head home. Not Summer Chi.ill. Sunday brought on a bloody mary brunch which may have been not quite as energetic as the rest of the weekend, but certainly no less entertaining. The organizers had on the schedule a songwriter showcase consisting of Donny Brewer, Charlie Imes, and Sunny Jim. As with any songwriter showcase, they each shared the “stories behind the songs” and played off of each other extremely well in this unscripted show. At these type shows you learn more about an artist than at a regular “gig” and this one was no different. The room was surprisingly full for a Sunday event as each person was intently paying attention and hanging on each story the artists were sharing. It is no exaggeration to say everyone enjoyed the show with laughter, and yes, even some tears. 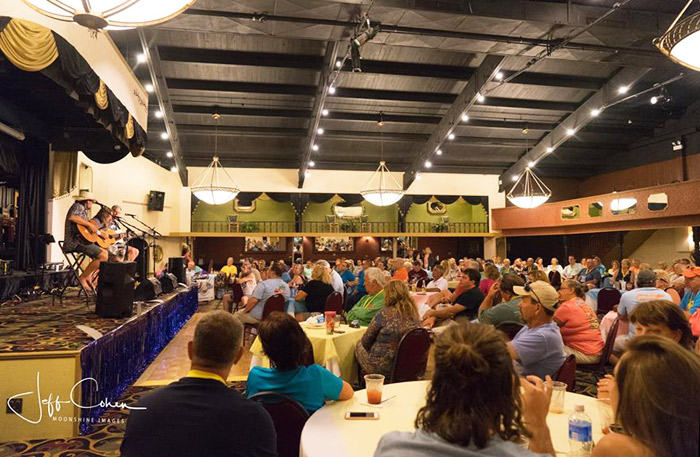 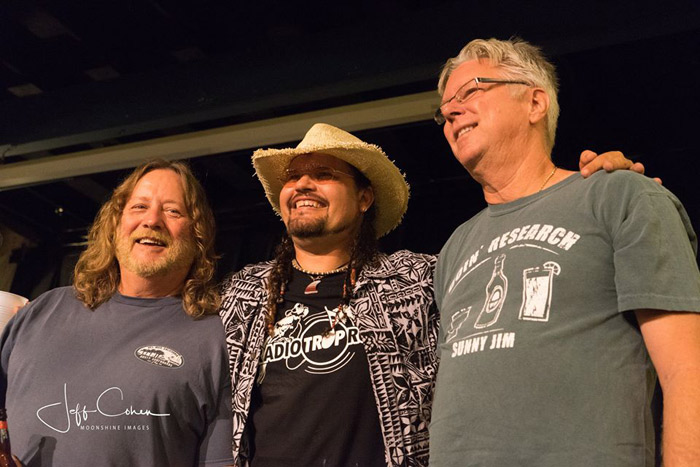 The parrot head motto “party with a purpose” was executed perfectly as the event raised $12,000 for Cornerstone Services. Billy Brehm, Kristn McFadden, along with their army of volunteers from the Chicago Parrot Head Club and Cornerstone Services pulled off an event that had the hundreds of attendees and dozens of performers looking forward to Summer Chi.ill 3, 2018.

Each of those in attendance I spoke with mentioned how “high energy” and “crazy fun” the weekend was. Artists frequently mention while on stage “what a great event this is” and how they “can’t wait to come back,” but speaking to them backstage, and “off the record” I can tell you each of them genuinely enjoyed being part of Summer Chi.ill. You could tell by watching them on stage that they were having a great time, and that in turn, carries over to those watching them. It’s just a matter time when Chicago’s nickname changes from “The Windy City” to “The City of Summer Chi.ill.”

Thanks to Jeff Cohen of Moonshine Images for all these great photos.