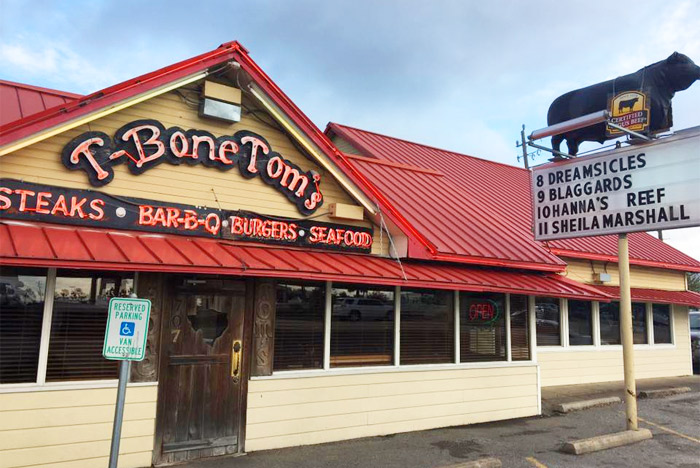 If you’ve been to Pardi Gras and have spotted a fellow wearing a big black cowboy hat, you’ve just seen the owner/ proprietor of one of the hottest places for live Trop Rock music in Texas. The “cowboy” is Barry Terrell and he owns and operates T-Bone Tom’s in Kemah, Texas, where live music happens six nights a week, twelve months of the year.

When I recently spoke to Barry, he told me all about the history of T-Bone Tom’s, why it’s a haven for Trop Rock music and also relayed information about his other restaurants. 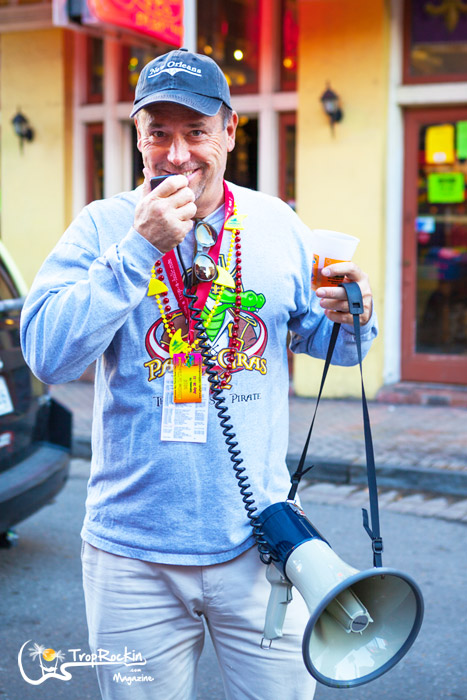 Barry Terrell as the Pub Crawl Grand Marshal at Pardi Gras in 2015.

T-Bone Tom’s opened in 1974 and Barry was able to purchase it in 1998 and opened the backyard area, installing a small bar in 1999. Little did he know what a performance venue that back area would become in the future. Kelly McGuire was the first to approach Barry about playing his music live back in the summer of 1999 and that was the beginning of live music every Friday and Saturday night.

The area has expanded every year and now boasts the largest Palapa made in Texas “the old fashioned way,” according to Barry. If you are a resident of the Texas Gulf coast, you certainly remember Hurricane Ike, which came roaring through Southeast Texas in 2008. T-Bone Tom’s suffered a great deal of damage due to the storm and the whole restaurant had to be remodeled. All the trees in the back were lost, as well, so the area became ripe for the large Palapa area that is now there. 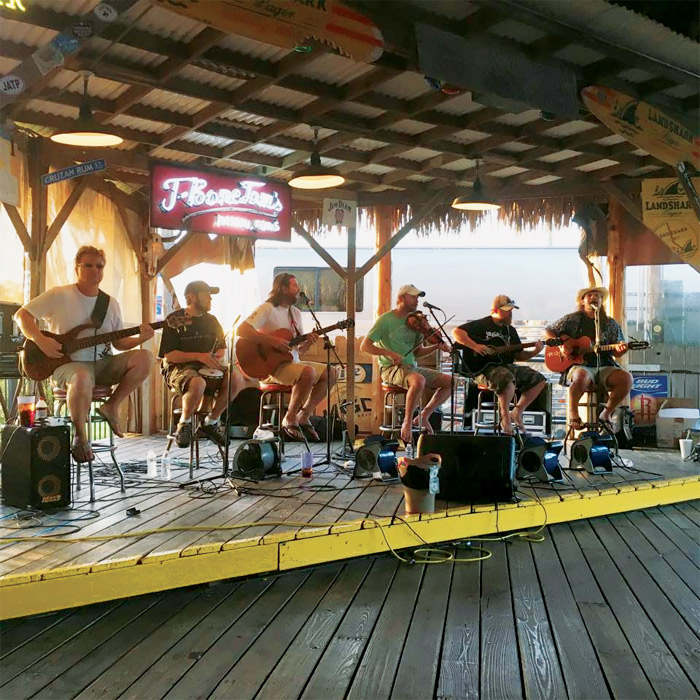 Guy Fieri brought his fun show “Diners, Drive-Ins and Dives” to the area and filmed a segment at T-Bone Tom’s one year to the day after Hurricane Ike’s devastation. When I asked Barry what they prepared for Guy, he was quick to say that they showcased their “Armadillo Eggs”, “Tom’s Choice Steak” (which is a flavorful rib-eye) and their homemade sausage. Now that’s fun! 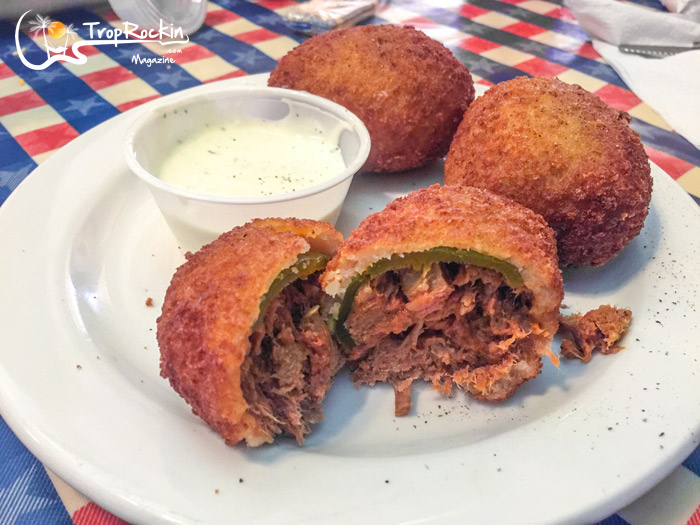 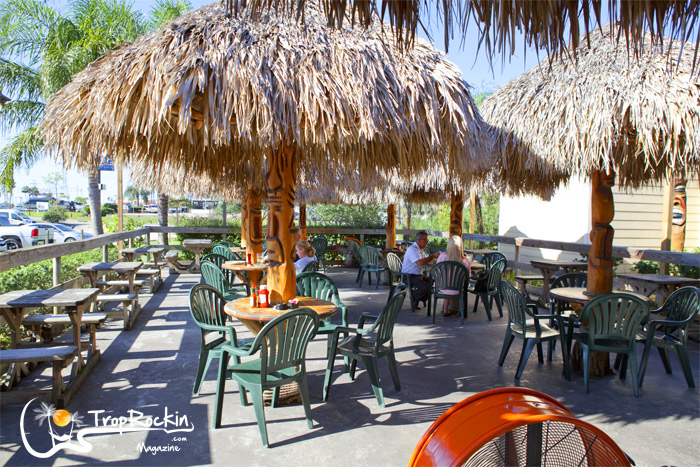 Barry went on to elaborate about the live music. On Tuesdays and Wednesdays, they feature single and duo acts. Fridays and Saturdays showcase bigger bands and there is always Country played on Sundays.

The Houston Chronicle recently awarded T-Bone Tom’s as Second Best Live Music Venue in Houston (area). That’s a huge honor. When I asked Barry how he got into Trop Rock music, he told me that he graduated high school with Jerry Diaz. That certainly makes sense! Every time Jerry plays, they apparently have the largest crowds. 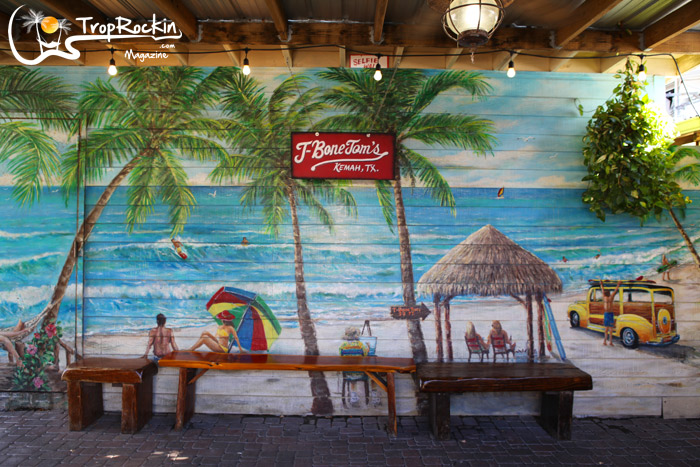 T-Bone Tom’s beach mural called the “selfie wall” plus benches for waiting to be seated.

Barry Terrell started in the restaurant business as a waiter, then went on to manage three restaurants before buying T-Bone Tom’s. He must have that golden touch… he bought Tookie’s Hamburgers after Hurricane Ike and kept the same 35-year-old menu. The Houston Chronicle has voted Tookie’s Hamburgers as having the best burger for three years in a row.

Barry also opened Tookie’s Seafood in Kemah and serves up “NOLA-style” food in the former church purchased and renovated by Barry. They specialize in fresh fish and grilled oysters, all prepared in an open kitchen. There are plans for a music venue to be developed there, also. 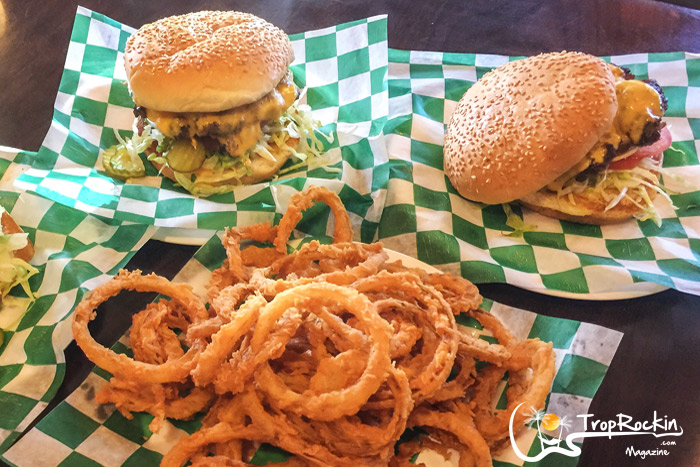 Watch various Trop Rock musicians’ schedules and you will notice that if they tour through Texas, they will likely play T-Bone Tom’s. Thanks to Barry Terrell, more folks can discover terrific Trop Rock musicians while feasting on fantastic food. What more could we ask for?

Visit Barry at T-Bone Tom’s the next time you’re in the Kemah area, south of Houston and north of Galveston.