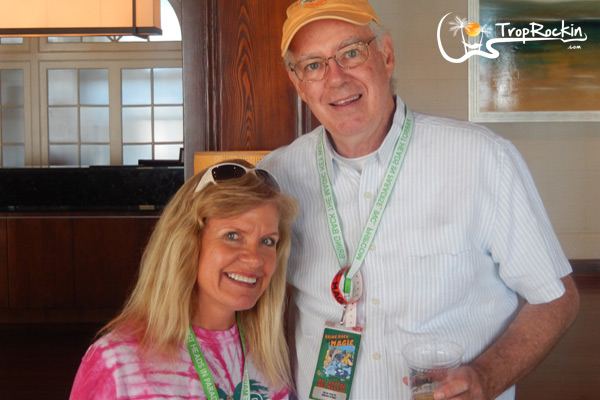 How many of you who regularly attend Meeting of the Minds in Key West visit the “Mini Mart?” I know I have to browse the vendor area at least a couple of times. Do you remember spying the tall man wearing a ball cap who stands behind a table full of books? That’s Tom Corcoran, and it’s likely he’s telling a story about life with Buffett back in the seventies, along with signing his latest book.

I love chatting with Tom every year, and sat down with him for an interview at the last MOTM. While I thought I knew more about him than the average Parrot Head, I learned all kinds of fascinating things about this multi-talented man. Like many South Florida residents, he grew up in the cold weather country – in the Cleveland, Ohio area. He went to college at Miami University in Ohio and then did a stint in the Navy.

While in the Navy, he spent some time in Key West and was intrigued with the town. After he re-entered civilian life, he and a college buddy started traveling. Along the way, they spent a couple of weeks working construction to earn some journey money. Construction work wasn’t his lifelong dream and they hopped in their vehicle and hit the road, until they drove to Key West and right up to Captain Tony’s bar. After a trip back to Ohio for the holidays, Tom called up his college girlfriend to join him and officially relocated to Key West.

Instead of working construction, he took a job as a bartender at The Chart Room. Jerry Jeff Walker came in one day with a young man and introduced him to Tom. And wouldn’t you know who it was? Tom served Jimmy Buffett his first beer on the first day the little-known musician arrived in Key West. In fact, Tom wrote part of the lyrics of what would become “Cuban Crime of Passion” with Jimmy soon after when Buffett came over for dinner.

Tom always wanted to be a writer and began to mess around with writing lyrics. He took along another verse he had written once on a sailing jaunt with Jimmy Buffett and those words turned into part of Buffett’s huge hit “Fins.” Tom told me that in the seventies’ era Key West, “Jimmy wrote the soundtrack to our lives.”

He is still active in writing lyrics, but now he collaborates with Trop Rock musician John Frinzi. Tom now lives in Lakeland, Florida and when John moved about a mile away from Tom, they became neighbors. Tom has been a MOTM Mini Mart fixture for at least fifteen years, so he and John had met before. He wrote lyrics for four songs on John’s CD “Salt River,” and for six songs on John’s newest, “Shoreline.” Tom also shot the cover photograph for “Shoreline.”

While we were talking about early Jimmy Buffett in the seventies, I wasn’t going to let Tom get away without talking about his photography. He told me he always enjoyed taking pictures and was fascinated with the architecture and colors during his early days in Key West.

What a good friend he was to Jimmy Buffett with his photography… he didn’t charge him for the album cover photography he did. Tom did the cover shots for five albums in a row, starting with “Changes in Latitudes.” Do you own the 4-CD set “Boats, Beaches, Bars & Ballads?” There are quite a few old Key West photos of Jimmy peppered throughout the collection booklet and Tom shot all those photos. And if you’ve seen old Buffett photos on the Jumbotron at Jimmy’s concerts, you probably have seen more if Tom’s work.

And Tom’s books! I love his mysteries featuring his main character, Alex Rutledge, a photographer living in Key West, who shoots crime scenes on the side and gets involved with solving murders. When I told him how much I can visualize his Key West scenes, he told me that he tries to make Key West a character in his books.

He has come to really appreciate Trop Rock and wants to be a bigger part of the music in the future. As for this writer, he has been nothing but encouraging and kind to me through the years. Tom Corcoran can do it all!

If you enjoyed our article, please share it with your friends!

Great post! I love the Alex Rutledge series ~ I swear I can smell Key West when I read the books :-) Nice to learn more about Tom. I have one of his photo books about JB & KW (autographed!) I think if I had a time machine I would teleport back to KW in the 70's ~ that would be quite the ride ~~~ Bwg

I agree! Key West in the 70's must have been amazing. I wish I could have experienced it.