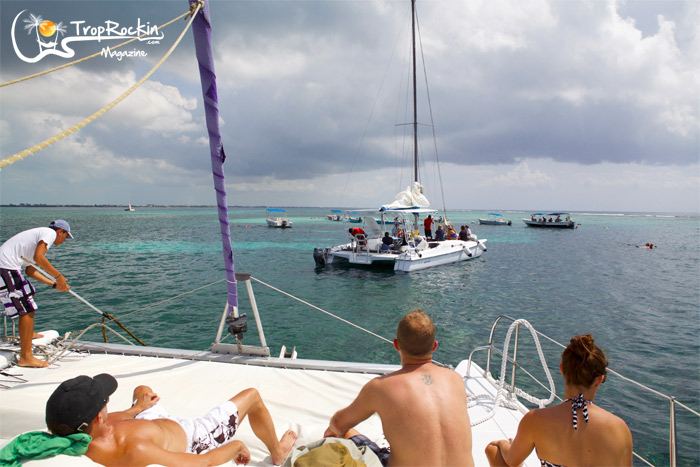 Less than a 20 minute boat ride from the beaches of Ambergris Caye is Hol Chan Marine Reserve, the protected area of the second largest barrier reef.  Brimming with sea life, the reef provides an unforgettable peak into another world.  We chose an all day excursion with two snorkeling spots and lunch on Caye Caulker, a sister island to Ambergris Caye.  Oh… the adventure begins!

Our fist stop was at the Hol Chan Marine Reserve where a number of snorkeling tours were already settled on their anchor ball.  At first glance, it seemed the water was filled with too many people to enjoy, but once we were in the water it was hardly noticeable.

With two guides on our tour, we split into two groups and swam towards the reef.  As we kicked toward the reef, large coral formations dotted the sea floor, each with their own little fish community swarming around.  Huge brain coral, colorful tube sponges and giant sea fans in different colors created the perfect backdrop against the sandy bottom.  We finally reached the fully connected coral reef where some spots almost reached the surface and other spots were 50 feet below.

Thousands of fish swarmed about, which barely seemed to notice all of us onlookers.  It was like swimming in an aquarium.  Rainbow Parrot Fish, Yellow Damselfish, Blue Tangs darting everywhere (I kept imagining Dori from Finding Nemo) and Queen Angelfish all made a kaleidoscope of colors around the reef.  If I had my choice, I would have spent the rest of the afternoon right here.

A resident Moray eel wasn’t particularly cooperative on our tour, most likely from being prodded by several tour guides to come out and eat a bite, but he did give us a quick look before darting back into his little cave.

The best reward came after the reef tour completed and we made our way back to the boat.  A lone sea turtle was munching on the edge of a turtle grass bed.  An awe inspiring sight.  After everyone moved on, I was still mesmerized for another full 10 minutes.  Glad the boat didn’t leave without me!

It was worth hanging back as the sea turtle continued to eat, gave me a glance every once in awhile, and slowly rose to the surface for a breath of air.  It felt like it was only me and the sea turtle in all the ocean.

Our second snorkeling stop was Shark Ray Alley, a sandy area within the Hol Chan Marine Reserve.  Obviously the nurse sharks and stingrays were well trained.  As soon as our boat found it’s anchor spot, they swam full speed over to us.  The best quote of the day came from my mother as she watched the sharks swarm around us.  “I’m not snorkeling here, there are sharks in the water!”   Somehow, I think she missed the point of snorkeling at Shark Ray Alley.

A white cylinder chumming / feeder was tossed overboard and the feeding frenzy began as we slid into the water.  I reached out and touched a passing nurse shark, but they’re quick and I could just barely touch its side.

As the next one came by, I swam along side with my hand on its back, just behind his head. Unfortunately, he quickly out swam me and my hand slid back hitting his dorsal fin.

I have no idea what happened next, as it was so quick. The shark made some commotion, there was a splash and my hand was thrown upwards above the water. All I know is three of my knuckles had uniformed scratches across them.  Was I bitten by a shark? Probably not, but we had fun talking about my “shark bite” the rest of the trip.

Certainly not deterred, I petted quite a few cooperative sharks over the next hour.

The easiest to pet were the sharks the tour guides held. Since my mother already made it clear she was not getting in the water, I asked the guide to hold a shark close to the catamaran steps so she could reach down and feel the rough, beaded shark skin. I didn’t want her to miss the opportunity to say she petted a shark.

The stingrays were more of a challenge to pet, as they stayed near the sea floor. The best tactic was to wait for a big ray to smother the feeding tube on the floor and dive down to stroke their back while it focused on sucking out fish bits.  They’re soft, a little slippery and thick. A unique texture combination.

Our last stop, Caye Caulker.  A quiet island measuring 5 miles long with less than 1500 full-time residents.  The town area is small, filled with restaurants and a few shops. We meandered down the sandy road looking for the perfect lunch spot and picked a quiet place with a beautiful view.

Lunch wasn’t noteworthy except for the fun we had laughing at the napkins, which were really 3 squares of low grade toilet paper.  You don’t see that every day!

Although lunch was nice rest stop on Caye Caulker, I’d recommend spending the same amount tour dollars on two half day trips to the reef instead of a single full day tour.

I’m glad I learned why Belize is one of the top diving attractions in the world.  Although, I don’t dive, it was clear to me in my snorkeling gear that the reef life of Belize is amazing.  I’ve snorkeled at many of the big Caribbean destinations and a number of spots off the beaten path, but none have compared to underwater world off Ambergris Caye.