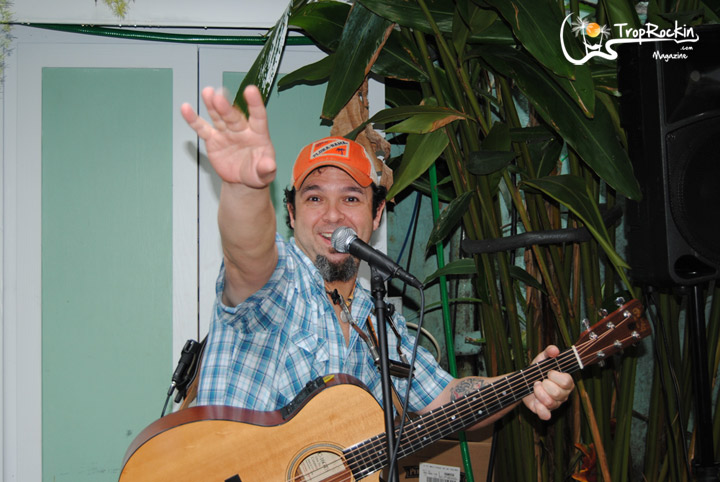 Trop Rock comes in many sounds and styles that transfer us to a warmer place in time to escape weather, work or reality for awhile. Pardi Gras music line-up gives us trop rockin’ parrot heads the opportunity to mingle in with the New Orleans Bourbon Street music life.

Perfect music venue for Danny Rosado performing his gulf coast style of music in the Orleans Grapevine Wine Bar & Bistro courtyard during the Margaritville Food products tasting. This former Navy sailor pleased the crowd with his performance showcasing his cd “Beach Boy Coming Home” and sharing his story about his new single for charity “With Apologies to Jim Morris.” Danny’s original music gives you a taste of an Alabama/Florida infused troubadour making it ideal for a Margaritaville Food tasting meet and greet in New Orleans.

Last year’s Pardi Gras King, Kelly Brown, graced the Bourbon O stage again with his band for another fantastic performance. Rob Hill brings a more laid back west coast style to Trop Rock. The refreshing view of this west coast songwriter was warm and soothing. Rob brings out a hidden sexy undertone with his love songs that had us shimming our shoulders slowly.

Thom Shepard and Coley McCabe showed up to perform a variety of Texas to Tennessee music after the crowd serenaded Thom with the tune Happy Birthday. The packed house did not stop two steppers from dancing and chair patrons from singing the lyrics to our favorite drinkin’ songs. The Bourbon O Bar of Jazz went country during Pardi Gras.

Saturday was a colorful morning with Jeff and The Cameros for the Bloody Mary party. Bert Hebert & Joel Block were this years emerging artists, while established Trop Rockers Rick Lamb, Steve hopper and the Jimmy Parrish Duo all helped the Tropical Isle live up to it’s name “Top of the Trop.”

Dennis McCaughey gave us a performance of memories as he traveled back in time with his voluminous of accomplished songwriting plus a few cover songs. Cory Young exhibited true horizon talent with his vast array of true Trop Rock originals. Cory’s music is a refreshing outlook or inspiration for beach people to hammock swingers. “Keeping up with Cory” is the phrase we used describing Cory Young’s talent for continually exploding with new songs.

The Detentions blend of harmonizing sound is reminiscent to Poco pulling you in for some music therapy. The energy of Chris Hiller could be bottled up as a new fountain of youth, while Dan Sullivan could charm a snake with his smile. These two have produced a duo sound like no other out there in Trop Rock. Their original music has a classic sound and just like a Muscle Shoals recording, you know it when you hear it.  The Detentions like to call theirs “Rockamole.” 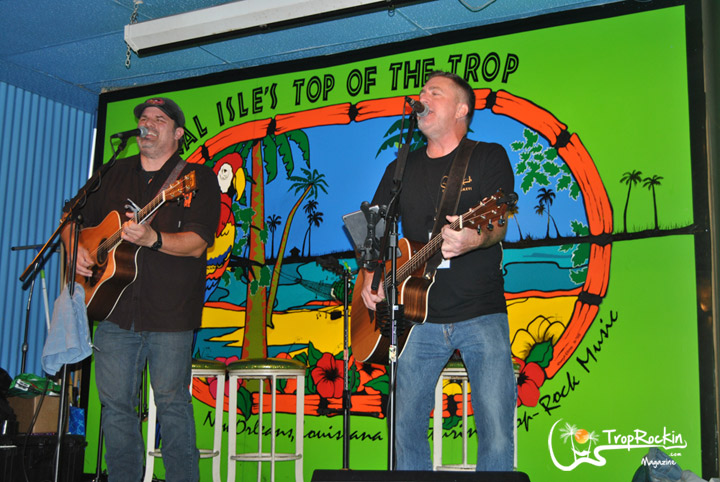 Trop Rock has their own style of big bands from southern rock with a touch of trop to an infusion of “beach rock.” Jerry Diaz and Hanna’s Reef keep the trock sound anchored to the Gulf Coast lifestyle. Southern Drawl Band brings a lot of country culture to the stage. Jimmy and The Parrots pull off a signature sound in cover songs to originals.

These bands all performed on an excellent level from their lead singers to their drum players. Here we are on Bourbon St. in New Orleans where some of the most famous drum lines perform. It’s not a band without a fantastic drummer down in New Orleans. Larry Dunsmore (Southern Draw Band), Trey Newmiller (Donny Brewer & The Dock Rockers / Hanna’s Reef ) and Mark Sacco (Jimmy & The Parrots) are drummers who entertain with their musical skills and hidden talents.

Especially Mark Sacco stands out because he can keep the beat behind the band, twirl drum sticks or take front stage as lead vocals. Mark has a special blended rap song he performs made up of 5 different artists giving us the best of rap on a trop rock stage. That talent gives Mark just a mic up on all this drum talent on Bourbon Street. Never to be overlooked, Melanie Howe did another amazing job showcasing her percussion abilities as she performed with all the bands and almost every performance at Pardi Gras. These artists on the back of the stage really do help carry the beat for the front of the stage.

Pardi Gras really went over the pond with Pete Lornie bongo drummer from Liverpool England. Pete was invited to perform by singer/songwriter “Barefoot” Reggie Starrett during the event. Reggie and Pete gave us an atmospheric performance of fresh tropics. Pardi Gras Krew Member, Pege Wright was there along with Donny Brewer to present Reggie with a rendition of the Trop Rock Music Association’s Wave award, he deserved for his part in the Song of the Year “Rum and Something.” Barefoot Reggie fans all felt the warmth of this over due moment.

The music and talent in the Big Easy during a “Pardi Gas” vacation brings the diversity of Trop Rock. One you have to march into for a colorful variety of musical fun.