The Parrot Heads of Port Aransas were in full swing putting finishing touches on their annual fundraising event, “Wings Over Port A.” Registration was going well, the various committees were gathering donations for the silent auction and the theme was coming together nicely.

Then August 25 and 26 happened and the little Texas coastal fishing, beach and tourist town was hit by the Category 4 storm, Hurricane Harvey.

It wasn’t long before the leadership of the Parrot Head Club realized there was no way the town would be ready for visitors and a fund raising event on October 13-14. Not long after they cancelled the event, wheels began to turn as to how the coastal Parrot Heads could be helped on the same weekend they had planned to raise funds to donate to Port Aransas charities. 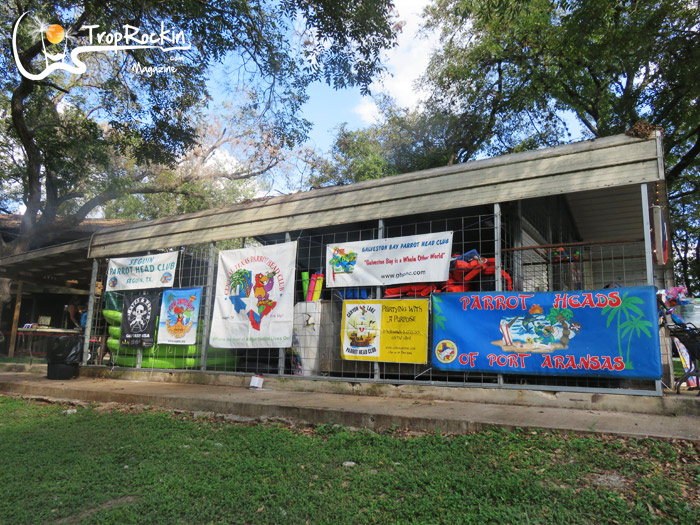 Julie Jones, from the Central Texas Parrot Head Club, thought it would be wonderful for Texas Trop Rock musicians to come together in a centrally located venue and raise money for the Lone Palm Foundation, which is the 501(c)3 charity arm of Parrot Heads in Paradise.

Parrot Head members can apply for assistance if they have experienced loss due to a natural disaster.

Hurricane Harvey induced quite a bit of dire need on the Texas coast from Port Aransas and Rockport areas all the way to Houston and the tip of the southeast Texas coast.

The word began to go out to Trop Rock musicians and to Texas Parrot Heads about a plan for a fundraising weekend in New Braunfels, Texas. “Phlockin’ and Rockin’ for the Gulf” was born. 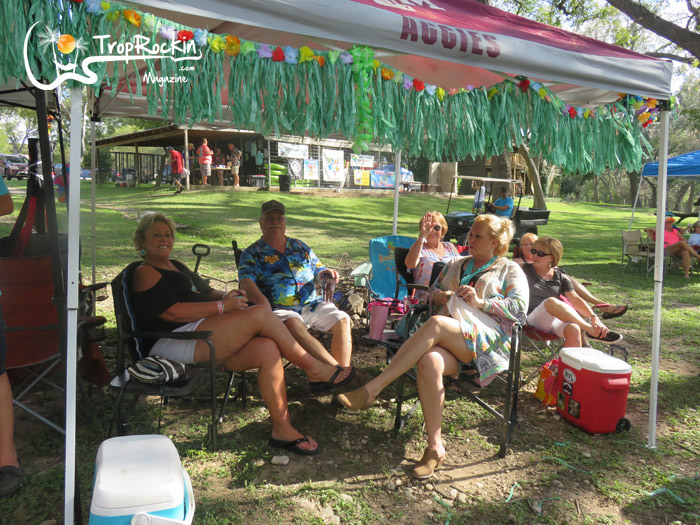 Musicians were eager to help with this effort and donate their time during the weekend. The Galveston Bay Parrot Head Club began concocting over 30 flavors of jello and pudding shots to take to the event for donations. A silent auction was organized, with Port Aransas Parrot Heads donating several items that were to be a part of their original Wings event.

Individuals and other Parrot Head Clubs assembled baskets and other goodies to tempt the pocket books of those attending. The actual venue, the Gruene River Outpost Lodge in New Braunfels, allowed all rooms to be obtained at 50% off for the weekend. Details were coming together well! 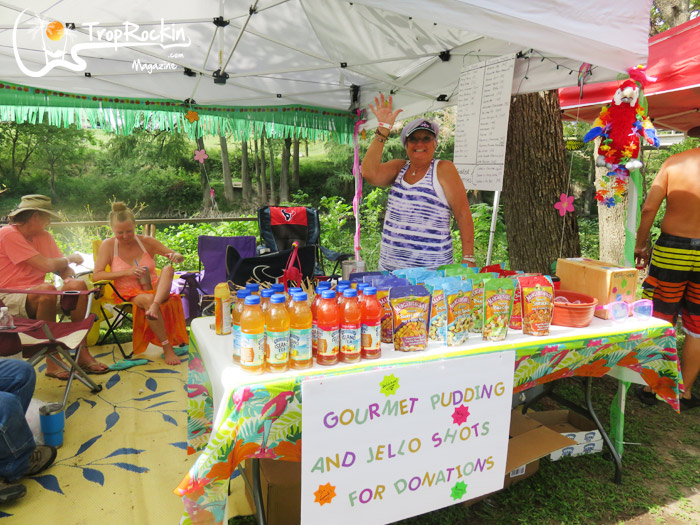 Finally Friday, October 13 came around and a great weekend began, in spite of the date. Dennis Davis kicked off the music that night, followed by Donny Brewer. A 50/50 event began the fundraising that evening and the jello and pudding shots were sampled, with generous donations coming in.

The night reflected wonderful weather with camp chairs and pop-up tents dotting the vast grassy area before the stage with the Guadalupe river flowing just yards away. 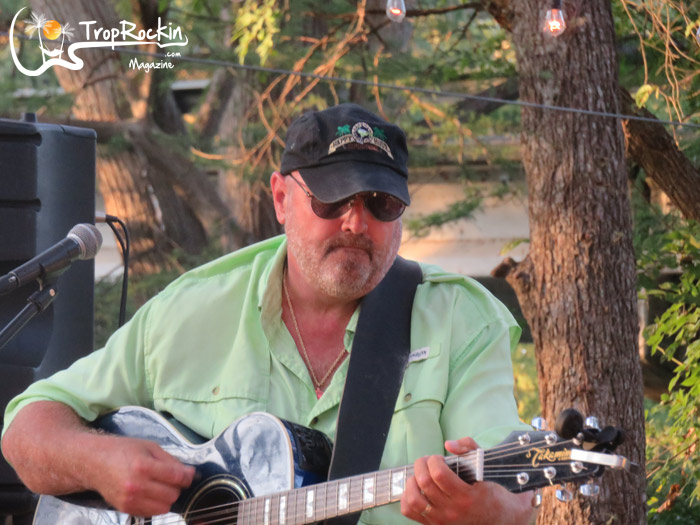 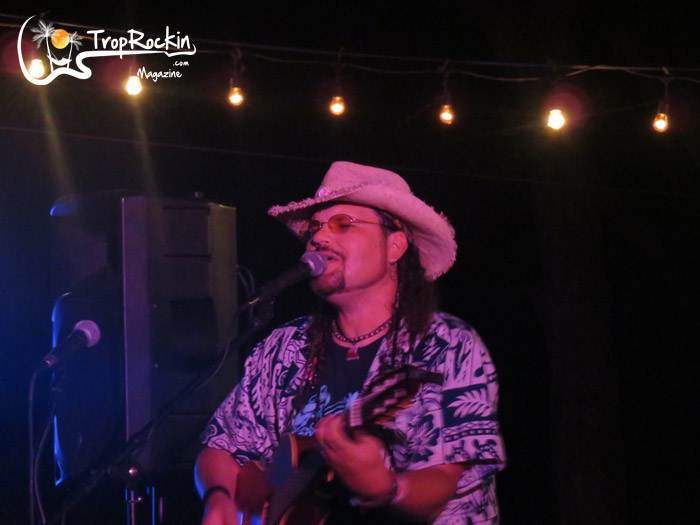 Breakfast tacos and bloody marys were made available the next morning, which helped the charity coffers grow. Late Saturday morning, the music started up again with The Detentions kicking off the day. A band out of Austin, the Jonas Lorence Band, provided the next set and the crowd was happy to experience a new group. The band became fast fans of Trop Rock and Parrot Heads, also.

A couple of solo performers shared their music next, with Jim Colangelo singing and followed by Joel Block, whose home happily weathered Hurricane Harvey in Rockport. Next up was Donald James, AKA The Third Coast Cowboy, from Austin and he delivered some terrific tunes. 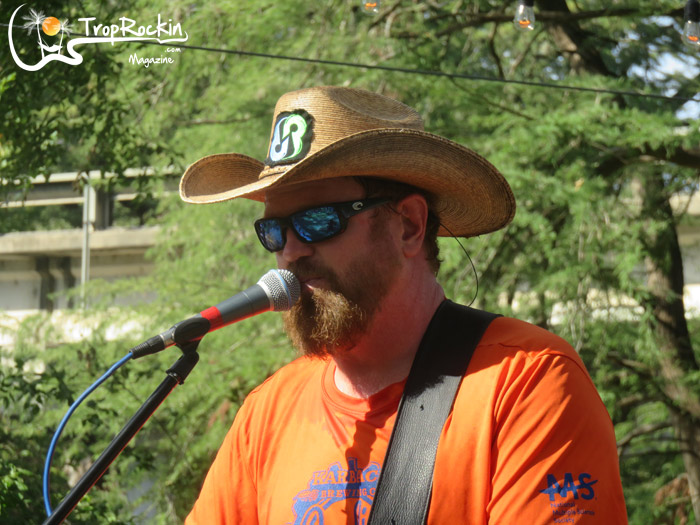 As the Texas sun began to sink low in the sky, the crowd was thrilled to listen to Thom Shepherd and Coley McCabe. After this married duo concluded, a local favorite took the stage.

It wasn’t long before the Perfect Parrot Head Band had the dance floor full of dancers. Before the evening of music ended, the crowd had snaked through the tents and chairs in a conga line and sang “Fins,” sporting their fin arm motions. 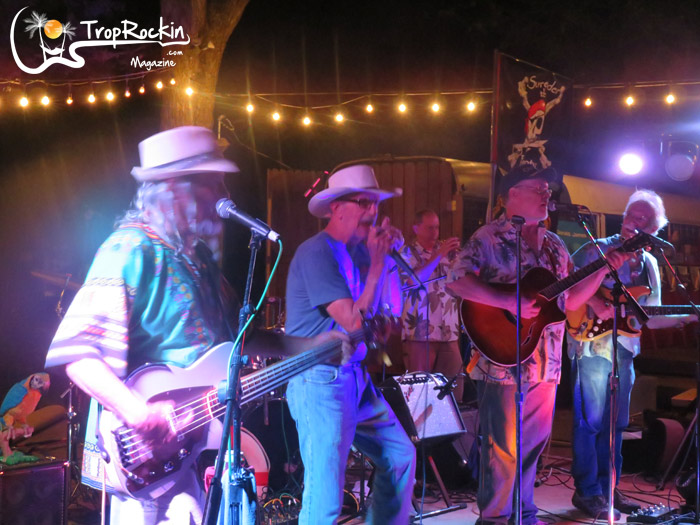 So how did this hastily conceived fund raising event turn out?

Drum roll, please….. a grand total of $13,728! What a fantastic example of Parrot Heads coming together and exhibiting the care and concern that is so indicative of these folks. Thanks to all who worked so hard to make this event a success.

And let’s rebuild the Texas coast!