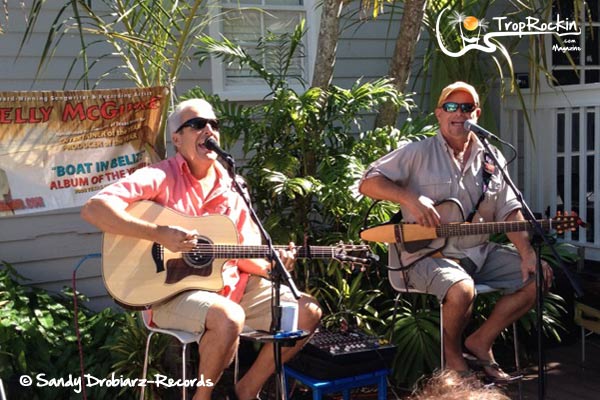 Thank you to Steve and Gayla Mitchell, two of the most dedicated Trop Rock music fans in the country, for sharing their experience with all of us.

On Sunday morning (November 2nd), many dedicated fans and supporters of Hugo Duarte (& Trop Rock in general) met in a quiet and loving ceremony held in Hugo Duarte’s honor Sunday morning at the Lighthouse Court in Key West. We all know the Lighthouse is Kelly McGuire’s turf and over the course of the Meeting of the Minds (MOTM) week, dozens of top musicians drop by to ‘sit in’ and perform every afternoon with Kelly and with Mark Mulligan, his co-host this year.

As most of you know, Hugo Duarte, has been battling esophageal cancer for several months. Trop Rock fans from all over the world have banded together in the last several months to help out Hugo financially and otherwise during his difficult struggles with this horrible cancer.

[Late News: as we write this article, we have learned that Hugo lost his battle. He passed away near his home in Wilmington, North Carolina, on November 7, 2014, at around 6:30 a.m.  We are missing you and so thankful for the music we’ll have always.]

The weather at Lighthouse Court on Sunday morning was breezy and cool in the shade, but warm in the sun. A good crowd showed up and were very well-served by Mark Mulligan, who sang several songs of faith and love, assisted often by Kelly McGuire. Those in attendance were very blessed and came together in love and in faith to savor their memories of Hugo Duarte and to just ‘pay respects’ to Hugo Duarte –who has been a mainstay at MOTM since its inception in Key West.

Mark Mulligan was an excellent emcee –very slick in mixing spiritual, poignant, and emotional songs, punctuated perfectly by humor and ‘punchline’ songs such as “Jesus Loves You…but the Rest of Us Think You’re a Jerk” (incidentally, though funny, this song has a clever and wise ending that left us all thinking…). 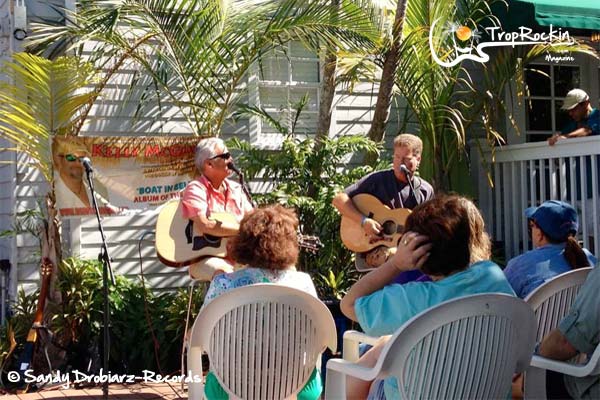 Several other fantastic Trop Rock artists pitched-in! Rob Hill, from Seattle, played some old hymns on his guitar and sang them to a responsive audience; he was later joined by Brittany Kingery who was (as always) fantastic. Tom & Michelle Becker joined in with some more hymns and they were right-on which really awed the crowd (if we have left out some names of other artists who joined in –please forgive us for that).

Mark Mulligan graciously donated proceeds of his touching new book, “The Three Miracles”, to Hugo’s fund. Rob Hill donated proceeds from sales of his music cd “God, Love and Mexico.”  And guests and patrons filled tip jars, with all donations going to the Hugo fund. Linda Baldwin sold her periwinkle ‘Hugo’ fundraiser wrist bands to many in attendance, imprinted with the slogan: “Nobody Fights Alone” 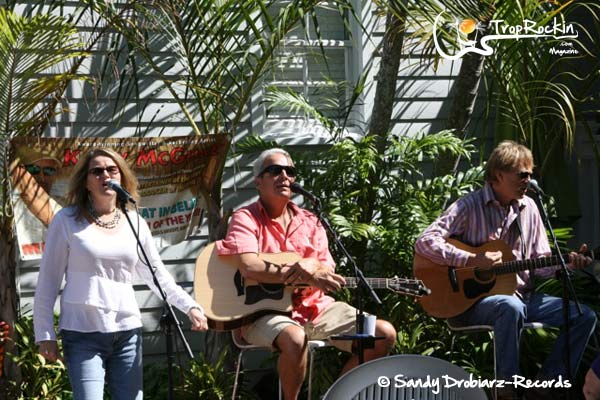 The crowd was very much in tune and very much a part of the show. It was the warmest and most loving ‘group event’ that we have ever experienced in our 15 MOTM’s and many of the participants commented to Mark and to Kelly that this type of laid back service ought to become a ‘regular event’ for MOTM Sunday mornings in upcoming years.  As Michelle Becker commented –we all have needs and concerns in our lives, we battle problems, medical and otherwise, and we all need to be able and willing to come together to help and support one another.

It was a very special gathering that Sunday morning. One that not only supported Hugo Duarte but one that let everyone just relax & enjoy God’s blessing of a wonderful week on a beautiful island with wonderful musicians & friends.

We really hope that Kelly and Mark will be able to do this again in years to come!

Dean, I was there and I saw you. I even got your photo This was an emotional yet beautiful morning. Happy to have made the time...

Not to mention, Dean (me... the guy playing pedal steel all day long) and Mark Mulligan teamed up and played the only Hugo Duarte song performed the entire week "A Little Bit of Rain"