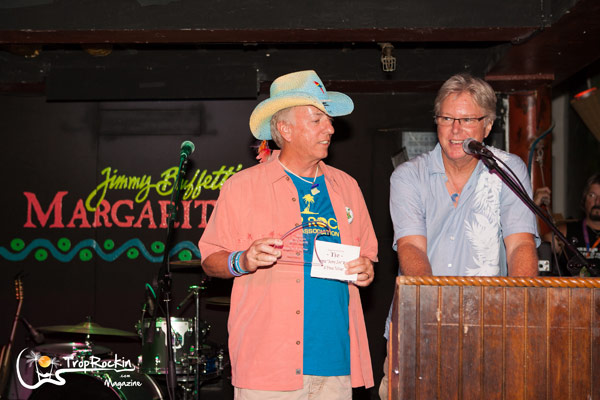 If you missed the first part of the highlights, check them out here:  MOTM / Key West Trop Rock Highlights (Part 1)

So many wonderful moments and no way to cover them all.  We asked friends of TropRockin’ to share with us a favorite event so we could present a wide variety of highlights and perspectives.

One constant in all of the memories is the love of Trop Rock music, the artists and the friends we spend a week with in Key West every year.  These are the good times in life.

Welcome to the 7th Annual Trop Rock Music Awards held at Margaritaville Cafe, Key West on October 30, 2014. What a night is was! First off, many congratulations to all winners and nominee’s. With many great musical artists, concert venues, radio stations, and fans, how do you pick just one winner?

Being a member of the Trop Rock Music Association gives you the right to cast your vote for a nominee, and then a short time later cast your final vote for a winner. Let me tell you, it was a hard call, a very hard call. 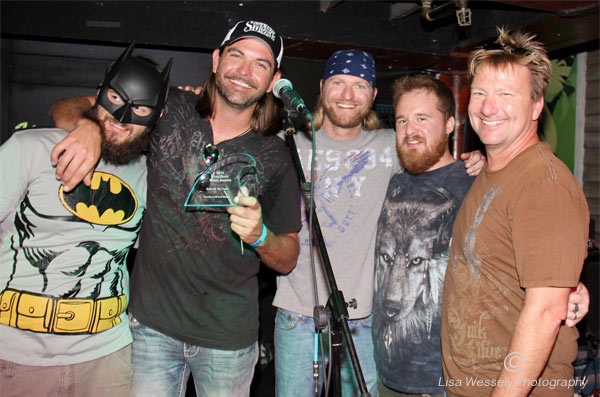 James White (aka Sunny Jim) took home four awards including the “I Can” award for his contributions to both his community as well as his generous contributions to help fellow musicians develop their careers. From fundraisers to help raise money so children can learn a musical instrument, to putting together a benefit concert for a friend in need, James has always willing to help. 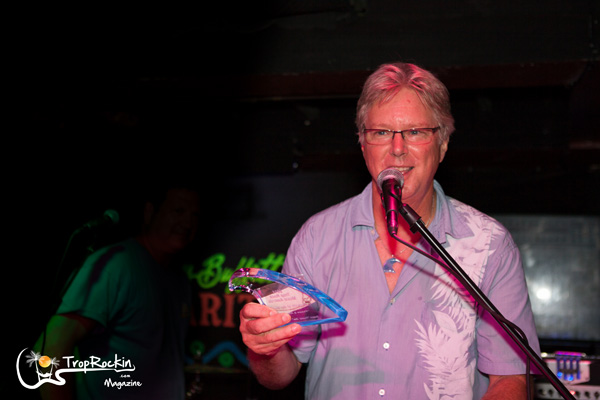 James White “Sunny Jim” accepting the TRMA “I Can” award.

For the second year in a row Music on the Bay held in Tampa Florida won Event of the Year. A much fun filled weekend with numerous Trop Rock artists with the proceeds going to Shriners Children’s Hospital. This past year they raised $31,000! That’s what we call “partying with a purpose.” 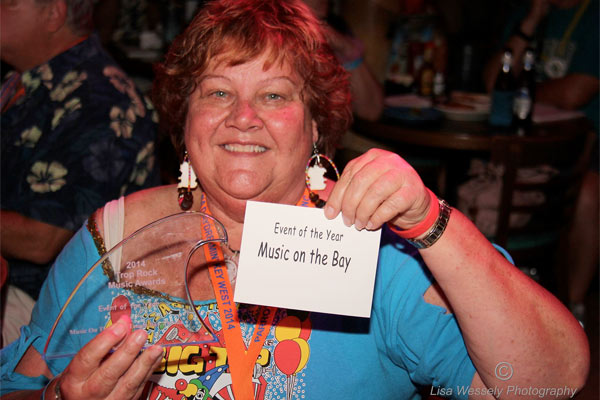 © Lisa Wessely
Dorothy Bedlin, President of the Tampa Bay PHC and one of the organizers for MOTB,
proud of the TRMA award for Music on the Bay.

This year’s Songwriter of the Year went to Steve Tolliver as well as Sunny Jim. It was a tie well deserved by both of these great songwriters.

A big thanks to the Trop Rock Music Association for putting together a fantastic music award show. Many thanks to all the performers, announcers, as well as our lovey award presenter Laurie Kornilow.

On Wednesday, October 29, all eyes were on the young students of the Key West Marching Band as they made their grand entrance at the Casa Marina. The young musicians enthusiastically played for the crowd of Parrot Heads to resounding applause!

Don Middlebook presented them with a check for $1500 to support the KWHS music program. The money was raised from sales of Don’s album “The Key West Connection”, which features the KWHS band and choir on the song “Gypsy Wisdom.”

Don gives back to the community often and it was a great pleasure to actually hear the music and see the kids who will benefit from this generous donation. 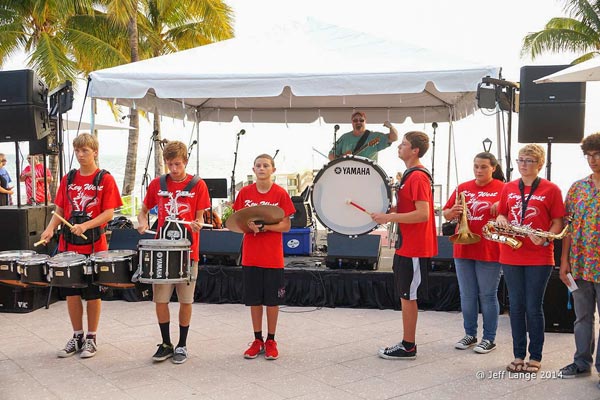 Artist Koz and his delightful wife, Pam, host Trop Rock singer/songwriters each year in his art gallery right on Duval Street during the annual Meeting of the Minds convention.  The beauty of catching a show at the  Greenworld Gallery is the intimate setting in the middle of the chaos.

The walls are a kaleidoscope of colors from Koz’s artwork and the 45 minute Trop Rock sets are laid back and informal.  Some moments are quiet, with all eyes and ears on the artist, much like a house concert while other times Koz’s gallery is alive with chatter as friends catch up or Parrot Heads get lively on the dance floor.

I stopped in the gallery Saturday morning where I was treated to several mimosas and Trop Rock music by Capt. Josh (Josh Ramsteck) and Charlie Imes.  And thanks to Koz and his “tech gal” Mitzi, everyone can be part of the gallery’s live music events via the “Koz Cam” web camera.

Charlie Imes treated us to songs from his new album as well as his first.  One of Charlie’s intimate moments was captured on the “Koz Cam” singing “My Next Song” a sweet love song from his first cd:

Capt. Josh is well known for his fun songs, making fans laugh and getting the crowd energized.  If you’ve never stopped into one of Koz’s live events, the fun we’re having in this video should encourage you stop in next year!  Here is Capt. Josh singing “If I Had a Hammock”:

October 30th was Pablo’s 60th birthday and what a great place to celebrate the big day! Hosted by our good friend Kid Conch, we were honored by all the friends and musicians who stopped by to wish him Happy Birthday, have some laughs, sing a few songs, and share his special day with him. People were in the pool – and up dancing!

One of the highlights was a special song by Christopher Dale, who sang a parody of “I Get By with a Little Help from My Friends” and turned it into “He Gets by with a Little Help From Depends” in Pablo’s honor. We laughed at the line “he don’t need no porta-potty!”

It was a fun day as The Sandbox was nominated for a Trop Rock music award and enjoyed the festivities at Margaritaville. We felt like we were at the Super Bowl of Trop Rock!

No Plane On Sunday – Thank Goodness! by Cindy Muir

Every year it becomes harder and harder to leave Key West (aka, Paradise!) when it’s time for MOTM to be over. There is a great silver lining, though, in the last day and that’s the “No Plane On Sunday” party at the Schooner Wharf Bar. As a Jim Morris mega-fan, to me there couldn’t be a better way to end our magic time of Trop Rock music and fun.

This year’s party was very well-attended, with a front table seat not a guarantee to have a good view of Jim Morris and the Big Bamboo Band. From the beginning until the end, the “dance floor” area in front of the stage was packed with fans. Jim and his fabulous band didn’t disappoint, with Jim even playing an acoustic mini-set while the band took a much deserved break.

Here’s hoping the end of the run doesn’t change for a long time… and thank goodness we didn’t have to catch that plane back home on Sunday! 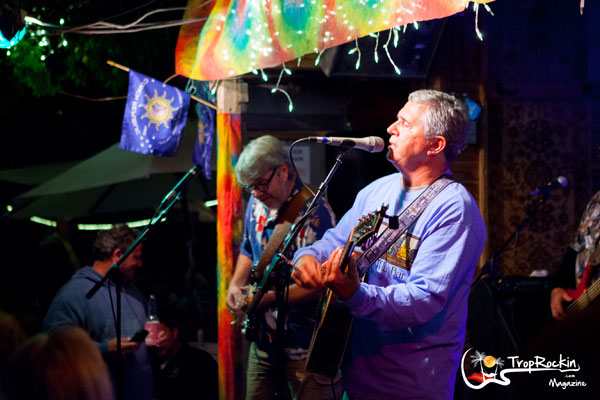 Jim Morris and the Big Bamboo Band at Schooner Wharf

It is hard to believe that another MOTM has come and gone. We wait all year for it to get here…anticipating all of the music, friends, food, and fun we will surely include…and then in the blink of an eye, it is suddenly over before we know it. We then get to relive our choices and are left to linger in the afterglow of all the events and gatherings…adding MORE sweet memories to our ever growing collection.

Despite the chaotic blur of making the difficult decision of WHICH shows to shoot for and rushing to make AS MANY of them as I possibly could, there were some new first-time additions I was lucky enough to attend…created for unselfish reasons to once again show love and support to one of our own. One of those shining stars was the ‘Songwriters Singin’ for Hugo’ benefit at Capt Tony’s…generously hosted by the Boat Drunks on Saturday afternoon. 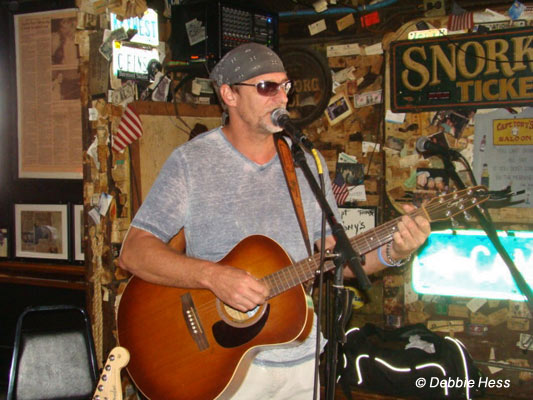 Jake Tatar of the Boat Drunks

Besides having a steady 4-hour flow of so many of our talented musical artists stopping by to entertain us, the event was dedicated to raising much needed funds to help Hugo with medical expenses and to keep his spirits up…hopefully feeling the love throughout the Trop Rock world from the end of the road.

Capt Tony’s is SMALL…and Hugo’s fan and friends’ base is HUGE! The place was constantly packed…wall to wall with friendly faces and caring hearts…continuously cycling through to show love, support, and appreciation and to do their part to help. 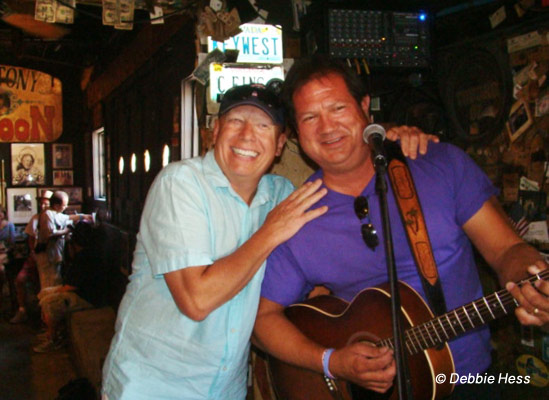 Jimmy Maraventano and Jerry Diaz contribute their music to the benefit.

Wonderful music was played, buckets were passed, bracelets and necklaces were sold, cd sales were generously donated. Dianne ‘Greenwoman’ Wickes was waaaay back in the far, dark corner…spending HER time constantly painting her one-of-a-kind treasures on coasters, one after the other, just trying to keep up, to sell for the cause. 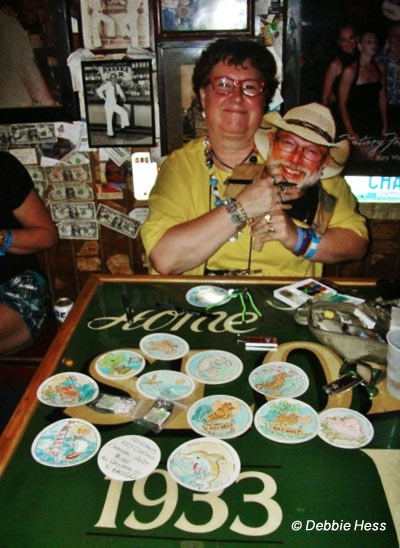 Glasses were raised…and photos were taken with ‘Hugo-on-a-stick’…the next best thing to him being there. Anything to help him out, hopefully put a smile on his face, and to help him to FEEL THE LOVE from afar. 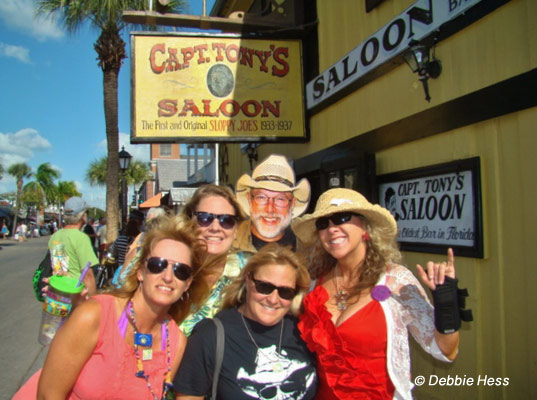 I was there for the long haul…remaining until the last song was sung, the last musician packed up and on to their next gig, and until the last Hugo fan had moseyed on. I remained to soak it all in…to remember the caring hearts who came, who gave, who played…to remember the stories told, the jokes made, and the feeling of unity. 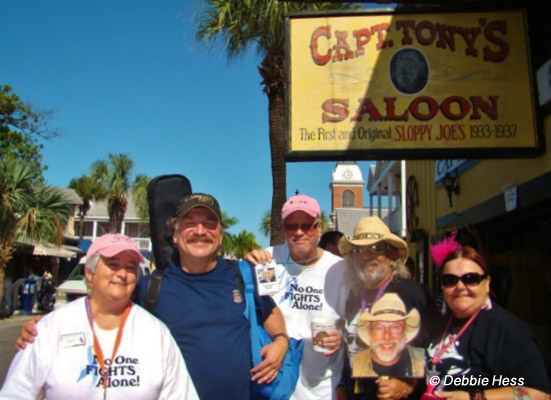 It was awesome. It was touching. It was a generous thing to do for an equally generous man who brought SOOO MUCH into SOOO many of our lives…music, joy, laughter, stories, wisdom, encouragement, and friendship…but most of all, he brought us all TOGETHER…through his lyrics and emotions in the songs he wrote, and night after night, year after year, at the Hog’s Breath right there in Cayo Hueso where we would gather and close down the joint!

I thank those who organized this heartwarming event and made it happen, and those who came and made it a success. I hope Hugo knows the massive impact he has made on all of our lives and the joy he gave us that will remain in our hearts forever. EVERYone in that bar had a Hugo story…plenty of material for songs he is sure to write in heaven. The gift that keeps on giving… His legacy will continue on…