When Hurricane Michael slammed part of the Emerald Coast of northwest Florida on October 10, 2018, it was doubtful the annual Parrot Head Rendezvous would surface from the rubble just months later. The president of the Panama City Parrot Head Club, Jeff Brewer (of Jeff and the Camaros), praised how well the club members rallied together to work hard to bring a bright light after the storm.

To sum up Rendezvous 2019, “Some people have said ‘best ever,’ and in my mind it certainly is ONE of the best ever. The outpouring from Parrot Head nation for this event and for our hurricane relief fund in general was beyond our wildest imagination,” Jeff said after the event.

Once again Parrot Head Rendezvous designated Girls, Inc. as their benefiting charity and several of their employees and volunteers wore their Girls, Inc. red shirts and ran the registration table.

Panama City Parrot Heads assembled and began to stuff Goodie Bags, creating a colorful assembly line. Soon after that fun task was completed, the music started. Danny Rosado kicked off the Thursday afternoon music set, followed by Rick Lamb, as Drop Dead Dangerous played as the finale for the night. 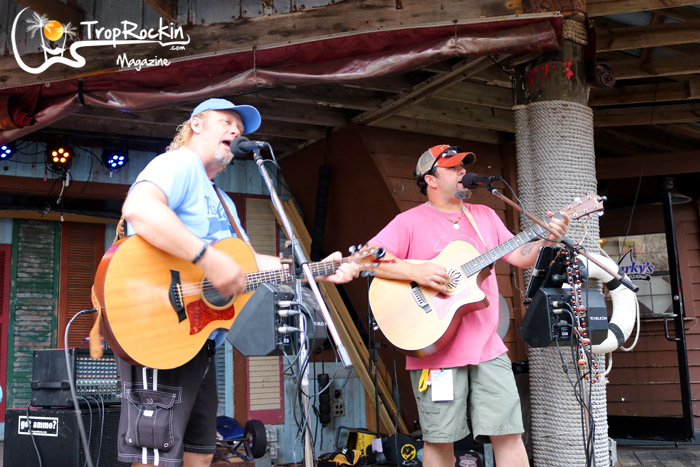 Friday morning, attendees were invited to nearby Runaway Island restaurant for libations and to hear Gene Mitchell, who performs there regularly. Runaway Island, like the host restaurant Sharky’s, has a large deck just a few feet away from the sugar-white sandy beach, so it was tempting to linger over lunch.

But, early afternoon featured Tropicool, so everyone headed back to the main venue. Tropicool is made up of James “Sunny Jim” White, John Patti and Jimi Pappas. Greg Dillard performed on the smaller stage three times that day and the crowd was also treated to The Bamboozlers followed by the high-energy of Jimmy and the Parrots.

The raffle was held on Friday and the array of festive baskets of goodies was astounding. A jello shot tasting contest was also held, and additional funds were raised by attendees paying $10.00 to be a “judge.” With Parrot Heads involved, the jello shot contestants had wonderful flavors and presentations.

Saturday dawned as another beautiful day in paradise and the first musical act up was The Aquaholics, which is actually the talented Bill Cockrell and John Beck on pan. JD Edge took over the small stage for three different short sets and Jim Asbell and the Tropholics played a fun show that got the crowd dancing.

Mr. Showman himself, Donny Brewer, later performed with the Dock Rockers after the drink tasting contest. Again, judges paid $10 each to sample the concoctions and there were 70 judges! The evening concluded with a special treat by Jimi Pappas which took us all back in time – BeatleBeat!

This was also Silent Auction day and the donated items were astounding. The Raffle and Silent Auction brought in about $19,000 in donations and the estimated amount of total money raised is over $36,000!

Sunday morning started with Worship on the Water and Dani Hoy entertained with her variety of great songs. Thom Shepherd and Coley McCabe wowed the group, per normal and the event closed out with Jerry Diaz.

Several of the musicians who were still there joined in with Jerry and by late afternoon, it was time to gather everything and head back to reality.

Jeff Brewer later summed up the weekend, “We went big this year and it paid off. Bigger stage, bigger sound, more musicians, highest music/sound budget we have ever had. Latitude Margaritaville and Coral Reefer, our two major sponsors, were also big additions.”

Jeff added that “The National Anthem, played by John Patti to a host of veterans, at sundown on Saturday, was one of the most moving moments I have ever seen. You can bet that is a new tradition we will hold onto. Add in perfect weather, and it turned into a beautiful, magical weekend on the world’s most beautiful beach.”