Now, with two CDs full of original songs, Steve is a well known Trop Rock artist performing solo as well as with his band at events and festivals.

Last year, we were honored to have Steve perform at the annual Trop Rockin’ Magazine fan appreciation party and he and his band have been featured twice at the annual Parrot Head convention, Meeting of the Minds. 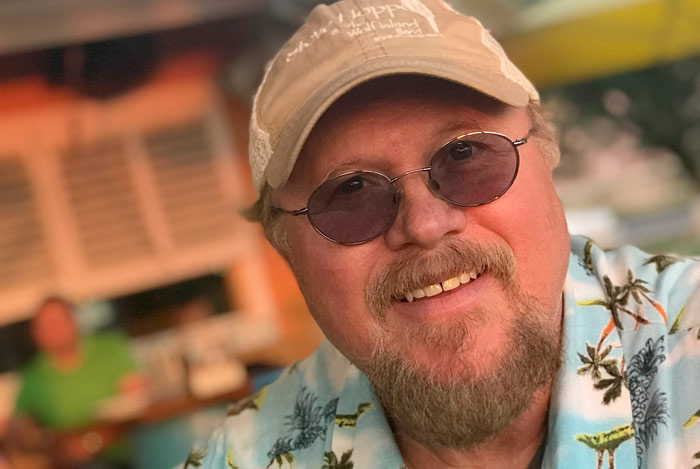 Steve tells us the Story Behind his Song “Star of the Tiki Bar” off his latest album Anywhere There’s A Beach:

This song has always been a favorite of mine, probably because it’s one of those Semi-True Stories.

I’ve spoken many times about the inspiration coming from Meeting Of The Minds in Key West. After playing the Lone Palm Street Party, the band and I were back at the hotel, overwhelmed from the experience.

Someone was saying how great the stage crew was and how it was nice to be treated like Rock Stars, I replied we would be more like Tiki Stars.

That was the inspiration but I think the reason it’s special is that it’s autobiographical. I was born and raised about halfway between Memphis and Nashville and 40 miles north of Muscle Shoals, AL. All three are amazing music towns and I’ve spent a lot of time in each.

Also for the last eighteen years I’ve played several nights a week in Memphis at the Bahama Breeze. It’s about as close to a tiki bar as you can get in Tennessee, there’s a Windmill Palm just a few feet from the patio stage.

Although I took a bit of artistic licensing, I’m not in the Keys but with my frequent trips, and the awesome people that support me nightly in Memphis, I do feel like the guy in “Star Of The Tiki Bar.”

Enjoy a snippet of “Star of the Tiki Bar” and then jump on over to Steve’s website where you can find out how to purchase this song as well as the rest of the album. Enjoy!

Photo courtesy of April Russell, one of the amazing customers at Bahama Breeze.